In the first six trading days of this month, Mar-Dec 2021 ("Bal 2021") NG prices have rallied $0.24 (9%) to $2.98/MMBtu. AEGIS continues to recommend structures with upside (puts, collars) over swaps for producer hedges, because of bullish economic fundamentals. 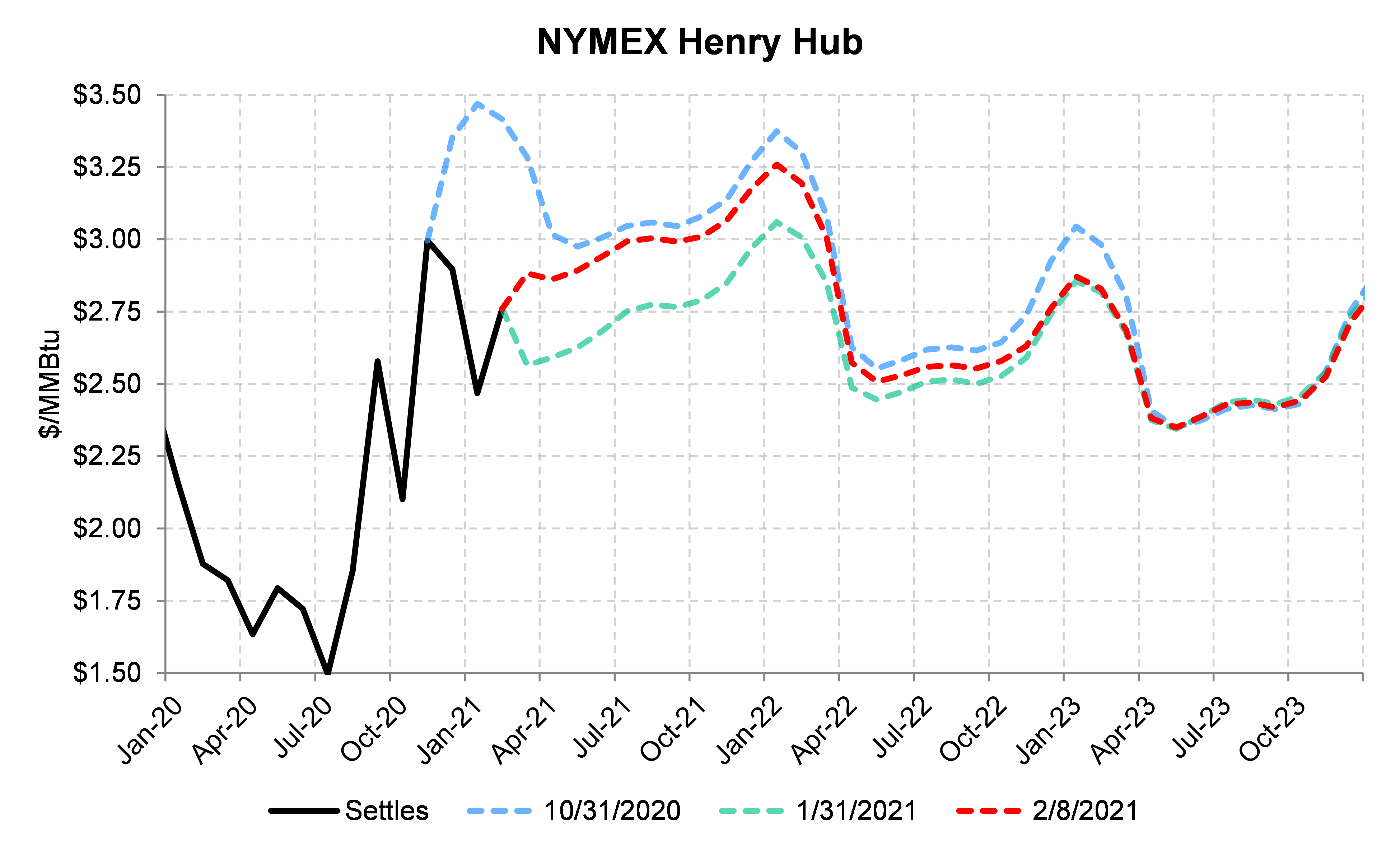 It's been a momentous February so far for Henry Hub prices. In just a week, Bal 2021 prices have climbed by nearly $0.25 per MMBtu. Despite the winter being a very warm one overall, fundamental tightness in supply-demand fundamentals is a theme that is gaining traction in the gas market. AEGIS wrote about the potential for strength last month here.Quick Summary of Henry Hub Forward Curve Movement the Past Few MonthsLet's quickly rewind how we got here. At the end of October, despite storage levels being robust going into winter, the market was aware that gas production growth was slowing to a crawl and thought the winter might be a cold one. (There's an adage among gas market watchers that the winter is always forecasted to be cold before it arrives). As such, gas prices were rallying and January forward prices on October 31 were nearly $3.50 (blue line).

Then of course the winter, through January, turned out to be very warm, and January prices actually settled at $2.47, a whole dollar below where the forward curve had been in October. Between the end of October and the end of January, the forward curve weakened substantially (compare blue and green lines). Mar-Dec 2021, or Bal 2021 natural gas from today's vantage point, went from $3.09 on October 31 to $2.74 on January 31.

Remarkably, most of that ground lost between October and January in Bal 2021 gas prices has been recovered in just a handful of days at the start of February. Bal 2021 NG was trading at $2.98 as of February 8 (red line).

The curve now has nearly recovered to its pre-winter highs and is in significant contango through the summer and fall. In other words, the month to date rally in the prompt Henry Hub contract (March) has also propagated into the rest of the curve.Fundamental Underpinnings of February RallyWhy have Bal 2021 prices rallied so strongly the past week? There are several reasons.

The first reason is that cold has finally arrived, albeit very late in the winter season. As a result, February gas demand has been rising and dry gas production has been falling some due to freeze offs. 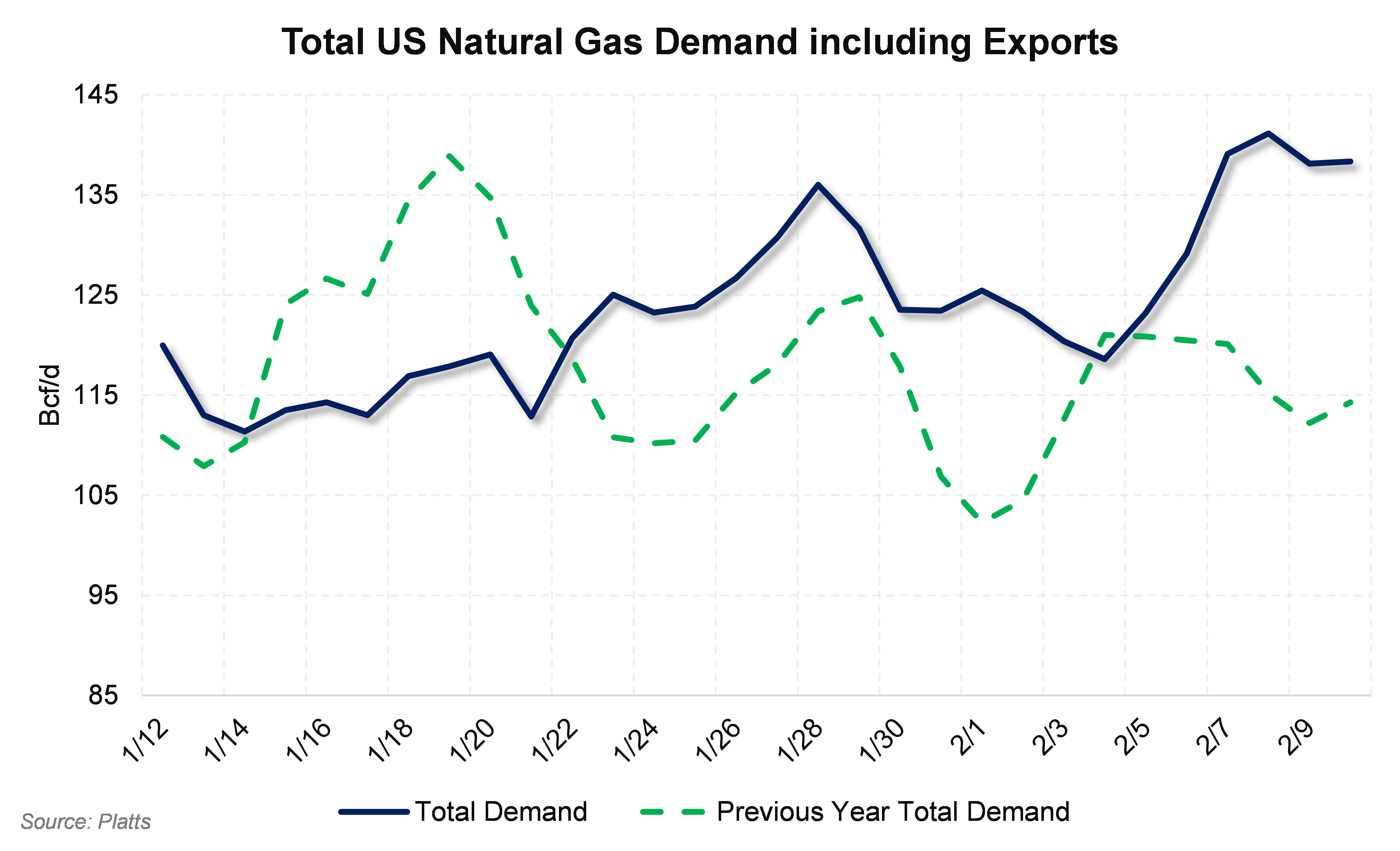 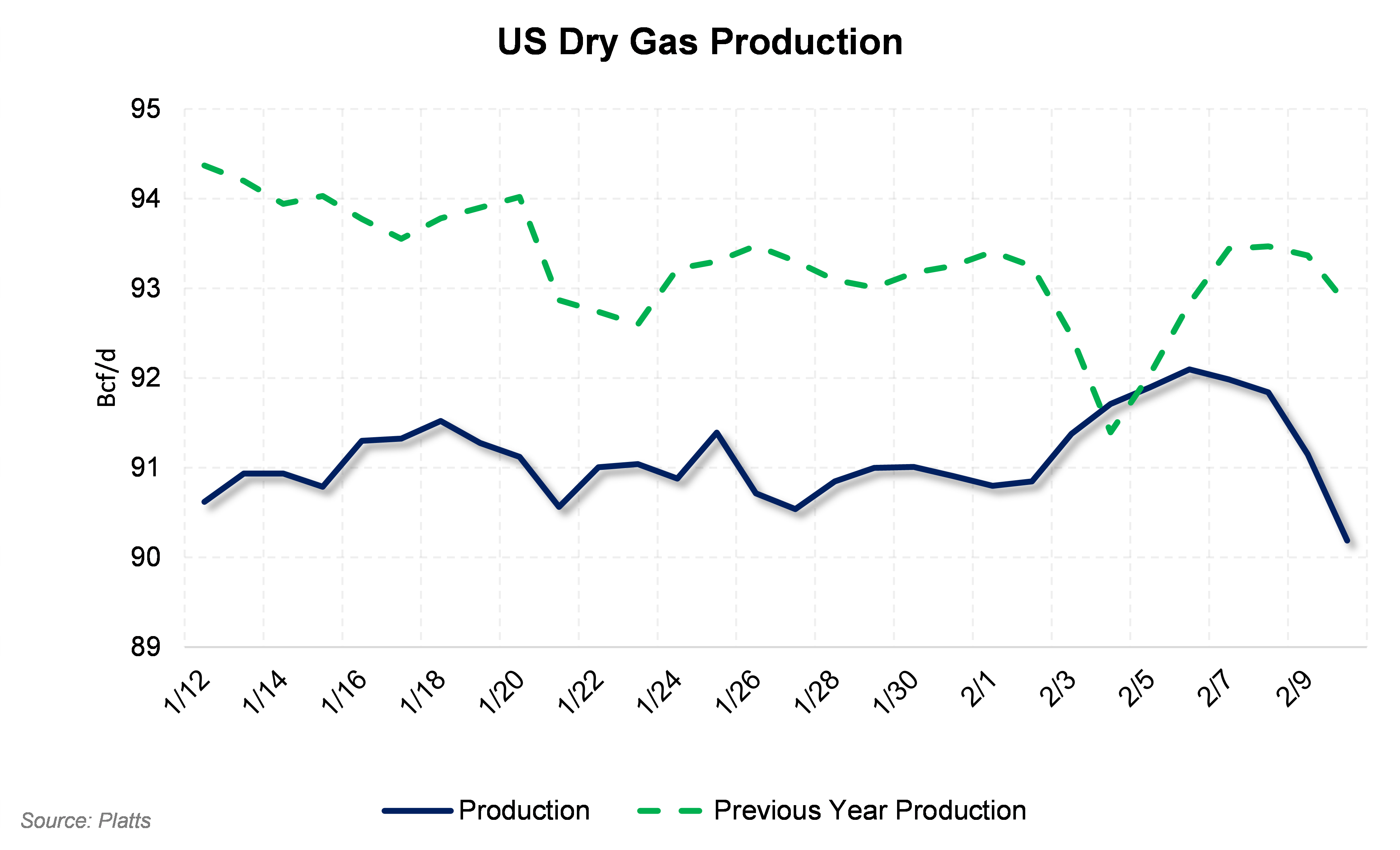 Because of the building structural tightness in the gas market, February weather is not only lifting the prompt contract but the whole curve.

The next reason is that the market may be gaining comfort with the idea that production growth will remain very muted in 2021, despite gas nearing $3/MMBtu and oil having a massive rally back to $55-60/Bbl. Rallying oil and gas prices may not prompt the same drilling response as we've seen in previous years, because operators generally remain more capital constrained. Many producers have said they will prioritize free cash flow over growth this year, to maintain investor interest.

On that point, Cabot, one of the largest Northeast gas producers, released guidance for 2021 production last week. Cabot indicated that 2021 production would be marginally lower than Q4 2020 levels; Q4 production was 2,375 MMcfe/d and Cabot is guiding to a 2021 production range of 2,300-2,350MMcfe/d. Capital spending will be down 6% year on year, to emphasize return of capital to shareholders and debt reduction. AEGIS expects other large public E&Ps to follow suit as they release guidance for 2021 in the coming weeks, both gas weighed and oil weighted companies.

Finally, another reason we may have seen the rally this past week across Bal 2021 prices is simply that winter is now closer to being over. Traders are shifting their attention from near-term weather models to the summer, fall, and next winter, where AEGIS has argued that tighter supply-demand dynamics will assert themselves.

AEGIS has not been alone in this assessment for Bal 2021. The EIA has been forecasting that gas prices will have to rise so that power demand is reduced in favor of coal, and that has already started playing out. PointLogic forecasts that summer US prices will have to be strong for another reason: to shut off the LNG arbs to international markets and incur cargo cancellations (which will support more domestic storage injections). These two groups suggest the market needs much less demand, that is less domestic demand and less export demand, this summer to remain in balance.

It is unclear precisely what combination of gas prices, power burn, and LNG exports will transpire this summer as the market adjusts to minimal US production growth. With the forward curve now nearly recovered to its pre-winter levels and in contango through the fall, the market is sending a signal for more production and storage.

AEGIS believes this signal is much needed and thinks producers should favor upside structures in their hedge portfolios where appropriate.