A surprising split vote by FERC on Tuesday further pushes out the likely start date of the 2.0 Bcf/d outbound pipeline from West Virginia beyond 2021On Tuesday, the Mountain Valley Pipeline (MVP) suffered another setback in a long series of regulatory issues it has had over the past few years. A deadlocked FERC vote prevents the operator of the pipeline, Equitrans, from moving to complete the project. Northeast Gas Forward MarketsNortheast gas basis markets are reacting with weakness in Cal 2022 tenors and beyond, as MVP's recently targeted in-service date was for 2021.

Here are a look at Dominion South (Dom S) and Columbia Gas (TCO) Basis forward basis differentials, and how they have changed YTD. 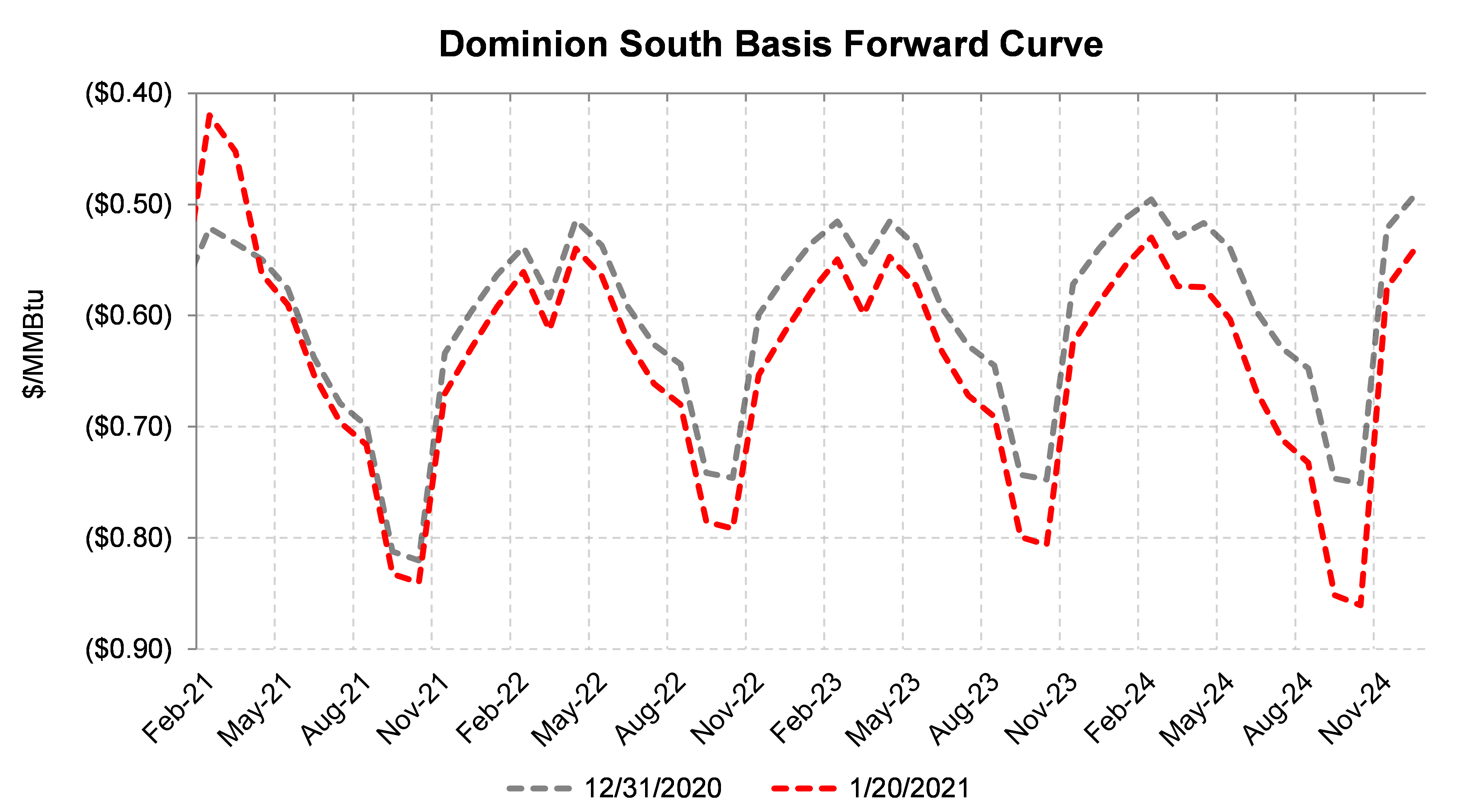 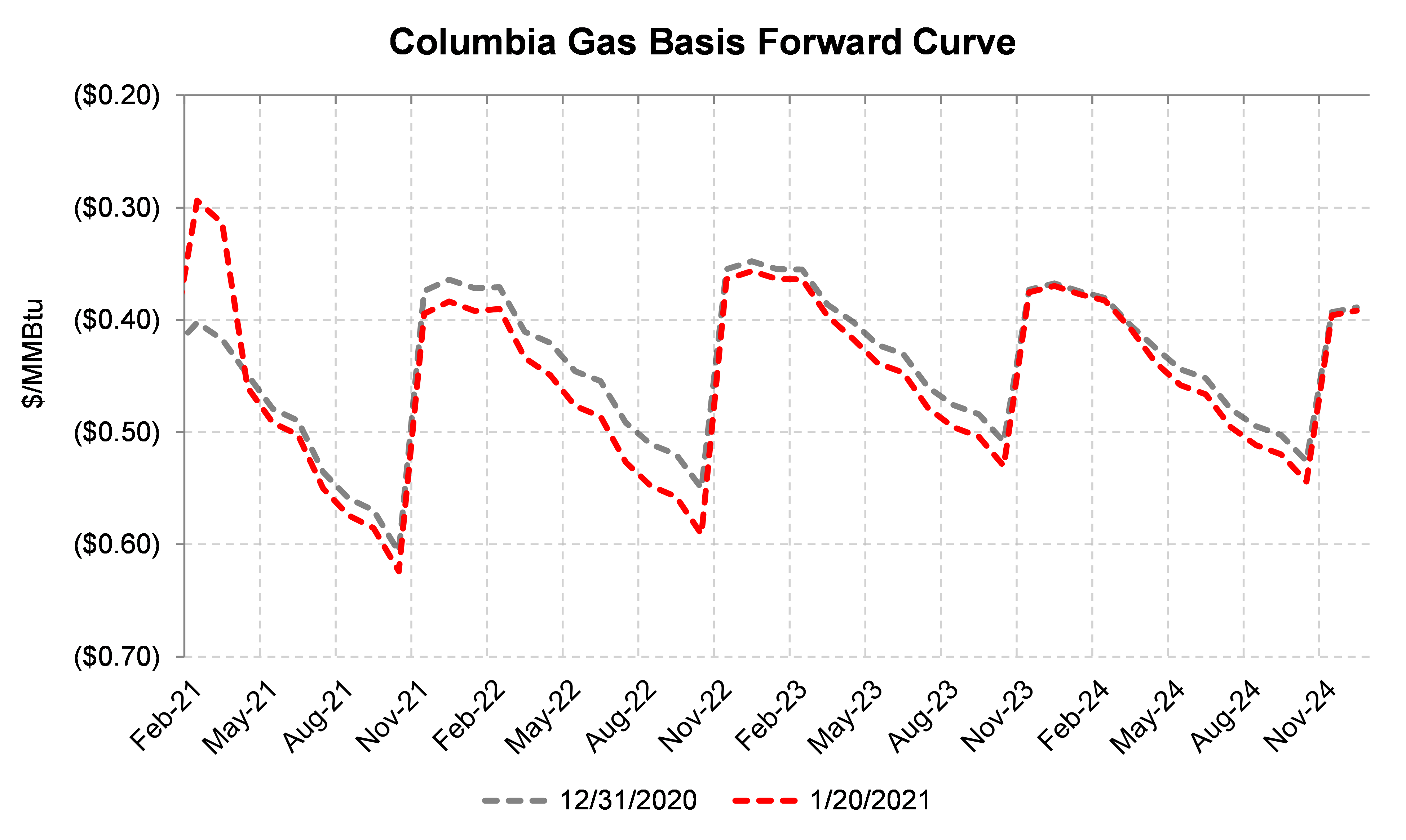 As you can see, Northeast gas basis has widened for Cal 2022 and beyond.

In spite of the higher bid-to-mid spreads in the out years, AEGIS thinks Northeast producers should evaluate their risk to basis prices and hedge if necessary.

The recent price weakness is justified. MVP's 2.0 Bcf/d capacity is an important future outlet for Appalachian gas. If MVP's in-service date continues to be pushed out past this year, Appalachian producers could be forced to compete for limited space on pipelines, resulting in lower in-basin prices.Long Term Implications for MarcellusWhen a basin experiences takeaway constraints, the result is often wide and volatile basis differentials. Appalachian gas is no stranger to that phenomenon. See the chart of Dom S basis historical settlements below (2014-present). 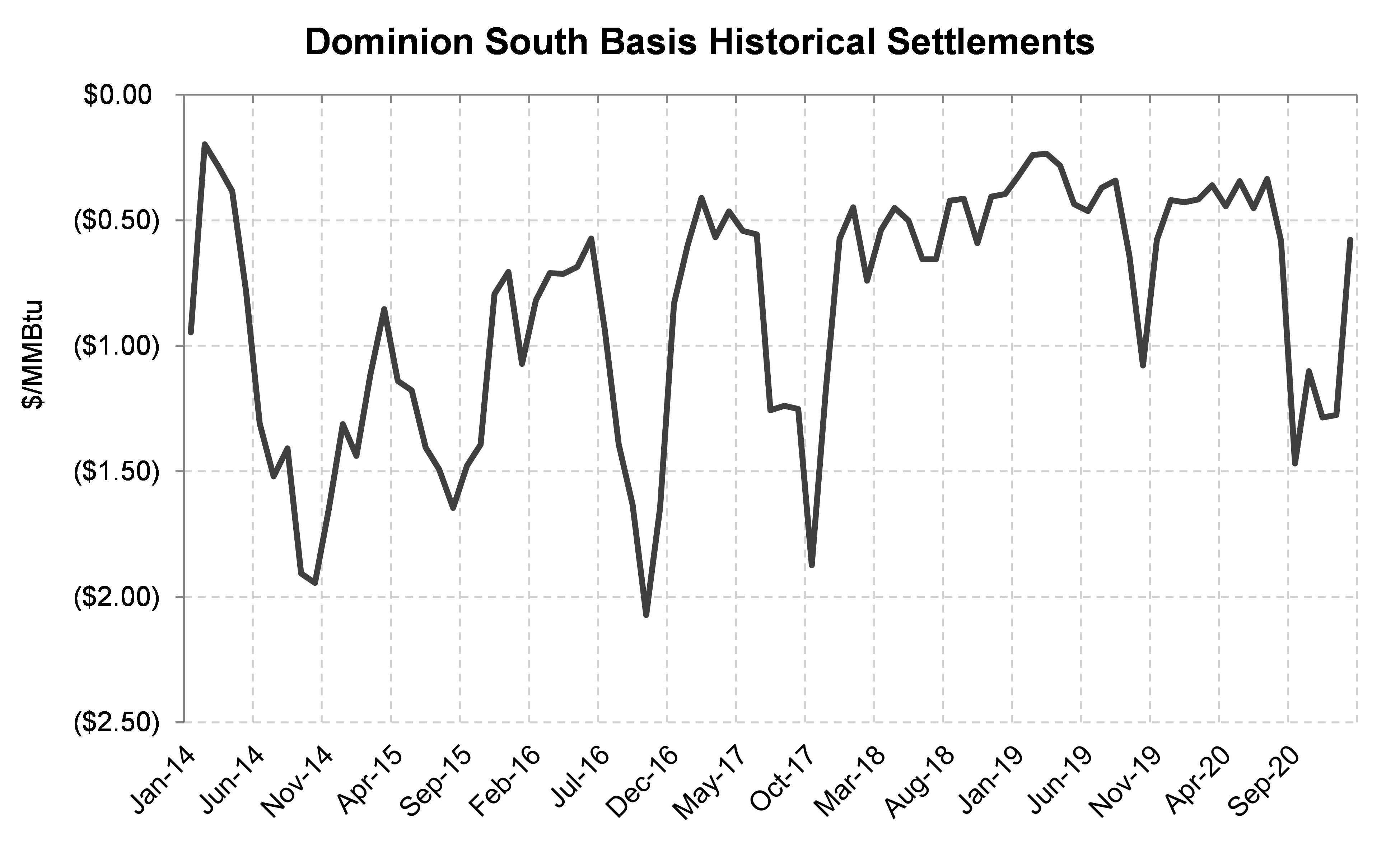 Northeast gas could be setting up for more basis weakness ahead. MVP is the last remaining major pipeline project slated for outbound capacity out of Appalachia.

It is unclear how big of a setback Tuesday's vote will be for MVP. The equity markets believe the setback will be a big one. ETRN, Equitrans publicly traded entity, is down almost 20% from Tuesday.

MVP was originally scheduled to come on more than 2 years ago in late 2018! While Equitrans very much still intends to complete MVP as soon as possible, delays (and related cost overruns) of this magnitude can sometimes be fatal for infrastructure projects. The Atlantic Coast Pipeline, another large 1.5 Bcf/d outbound project for the Marcellus, was cancelled in July by Dominion and Duke Energy after facing similar ongoing resistance from regulators.

In short, the hopes for additional takeaway capacity for Appalachian gas currently hang on MVP, whose prospects dimmed considerably this week. More On the FERC Refusal VoteThe Federal Energy Regulatory Commission (FERC) voted 2-2 on MVP's request to move forward with its construction plans. One commissioner abstained from voting, resulting in the split vote. The vote was a surprise as the Mountain Valley proposal was listed as a "consent item" on the FERC's meeting agenda. Consent items typically pass.

On November 9th, The 4th U.S. Circuit Court of Appeals issued an immediate stay of MVP's stream and wetland crossing permits in West Virginia and Virginia. That order led MVP to request FERC approval to bore under streams, a crossing method often used in such circumstances.

However, on Tuesday, FERC refused to approve MVP's request with their split vote, because, according to FERC Commissioner Richard Glick, MVP needs to secure all permits for waterbody crossings before resuming construction.

If MVP's request was approved, MVP would have been able to complete construction on the first 77 miles of the pipeline in northwest West Virginia and place that section into service, while continuing to work on the remaining 226 miles. (The remaining 226 mile section is in fact also facing lawsuits from environmental groups).

It has been a long uphill battle for MVP, and that fight is showing no signs of abating.