The NOAA is predicting another above-normal Atlantic hurricane season, and everyone with production exposed to areas prone to hurricanes needs to be aware.

Last year's hurricane season was the most active of all time and the fifth consecutive above-average season in terms of damage and the number of named storms (NOAA). Eleven named storms made landfall in the U.S., breaking a record previously set in 1916. 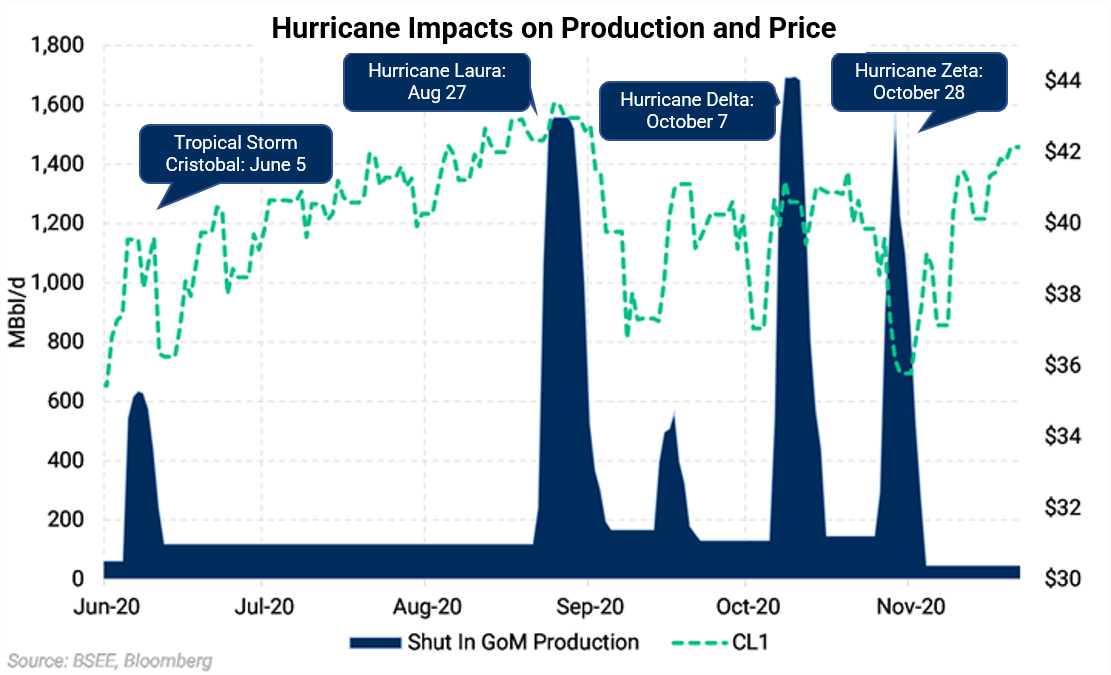 Looking back at the 2020 hurricane season, you can see several supply disruptions in the Gulf of Mexico (GoM). Hurricane Delta knocked out over 90% of GoM production. Last year, both Hurricane Laura and Hurricane Delta managed to knock more GoM supply offline than any storm since Hurricanes Ike and Gustav's combined effect in 2008, though the duration was much shorter.

Another inference that can be made from this chart is that hurricanes have recently become more of a bearish catalyst. The GoM makes up a relatively small portion of U.S. production now, compared to the 2000s. When hurricanes hit the U.S. Gulf Coast (USGC), the amount of refining capacity knocked offline usually exceeds production and lasts longer, thereby loosening the supply and demand balance and pressuring crude prices.

Production Drops Were Larger in the Past

The heat map chart above shows the Gulf of Mexico oil production deviation from the trailing three-month average, going back the last 30 years. As you can see in the heat map, the greatest risks to output exist during August and September, when Hurricane season peaks.

You can also see how hurricanes over the last few years have affected output. In October 2017, Hurricane Nate removed a significant portion of GoM output, more than Hurricane Harvey during August 2017. Hurricane Harvey was a Category-4 hurricane that caused significant damage along the U.S. Gulf Coast but not as much damage to offshore platforms. Hurricane Nate caused more offshore production to be brought offline because of its path, despite being a category 1 hurricane by the time it reached the United States.

How do you hedge prices when production can be uncertain during hurricane season? Please reach out to our trading desk for recommendations that mitigate the risk that hurricanes pose to production in exposed areas.