On inauguration day, incoming-president Biden issued a flurry of executive orders, chief among them being the revocation of a key permit for the Keystone Pipeline XL.

The pipeline has been a highly contested issue since its inception in 2008. When the pipeline was proposed, oil prices were averaging $100/Bbl, which meant that there was a valid case that the pipeline was needed to transport expensive bitumen (very heavy, sour oil) to U.S. refiners. The pipeline would have allowed the U.S. to increase its heavy crude imports, from a politically stable ally, to use as feedstock in its refineries.

The pipeline has never actually been operational in the U.S. and thus no existing imports will be affected. The price response to the news has been muted. Had the pipeline been completed, it would have provided buyers with more Canadian crude via pipelines. Still, where demand exists, oil will flow, and marketers will now need to seek other forms of transportation. Oil that would have been transported via the Keystone Pipeline may be re-directed using rail systems, given that price makes it economic to do so. 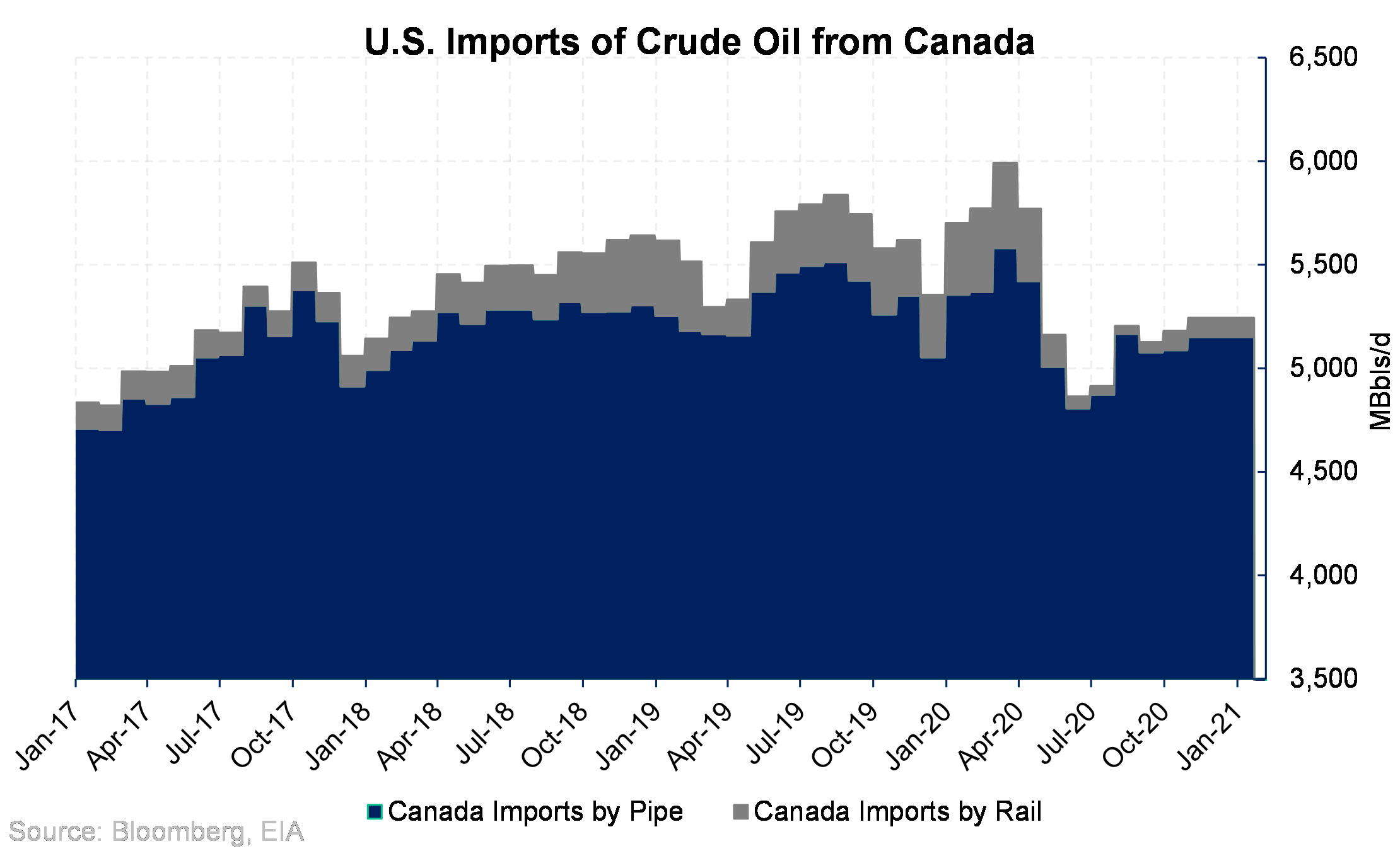 The chart shows Canada exports to the United States by method of transportation. During the coronavirus pandemic, overall imports dropped off but have since rebounded somewhat from the lows. The recovery in imported crude from Canada has come primarily from pipelines as reduced Canada supply has more easily fit within the capacity of the pipeline system. Crude imports by pipeline are only 430 MBbl/d below its demonstrated peak capacity. If Canadian production returns, the absence of a new pipeline may require more crude-by-rail shipments, albeit at higher transportation cost. Therefore, some oil that would have come to the U.S. by pipeline could still arrive by railcar.

Three presidents have now addressed the pipeline, spanning back to the Obama administration. Under the Trump administration, the U.S. state department issued a presidential permit approving the pipeline's construction. The latest move by Biden marks a stark reversal from the previous administration's approach to energy and infrastructure.

The pipeline has attracted intense criticism from environmentalists, many of whom have argued the pipe encourages Canadian oil-sands production, which is widely considered to be among the most energy- and carbon-intensive form of oil extraction.