Many economists are anticipating a robust period of growth in the U.S. once vaccinations get the coronavirus under control and normal commerce resumes, but a rough road remains. With President-elect Joe Biden's big fiscal plans released, the current dire pandemic situation is countering the U.S. markets' reflation hopes, at least for now. The consensus view appears to be that the economy is unlikely to get any better soon, given the currently slow rate of vaccine rollouts. But conditions will ultimately change for the better, and as they do, so will market views and prices, including a rising and steepening level of interest rates. 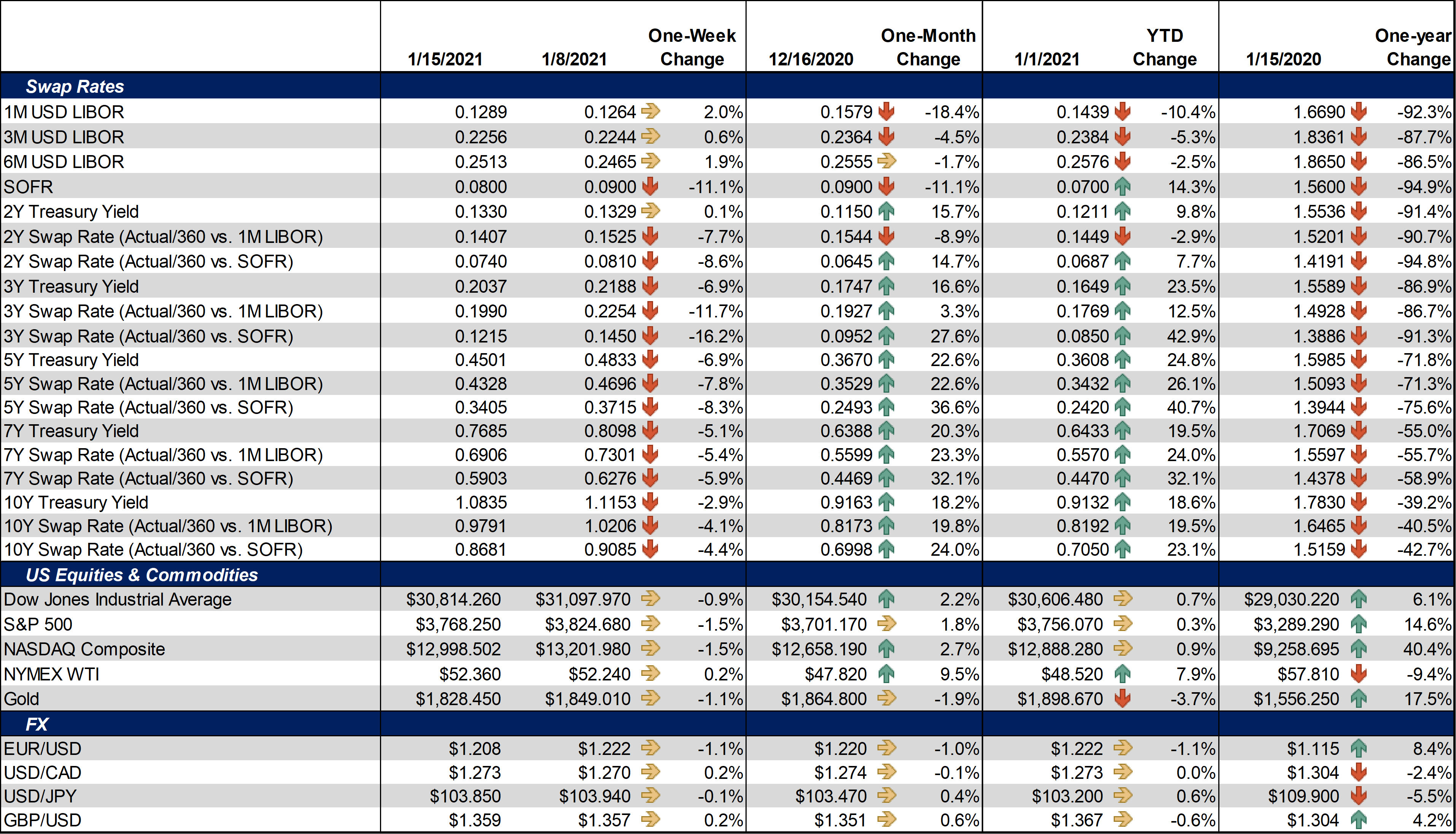 Retail sales failed to rise for the third straight month in December and the employment recovery has continued to stall further as the labor market reported its first month of job losses since April while weekly new jobless claims have spiked.

Things could worsen in the coming months. Some extra support measures for small businesses and the unemployed passed by Congress in December run out in March, and a federal eviction moratorium expires at the end of this month.

Optimism about the U.S. aid package had helped spur the reflation trade over the past few weeks, but the plan is far from a done deal. The ten-year Treasury yield backtracked from a nine-month high prompted by hopes of smooth passage of economic stimulus plans by Democrats in control all three branches of the legislature. But, as one could have easily assumed, Biden's much-anticipated $1.9 trillion COVID relief plan came under immediate partisan scrutiny.

Attention is now turning to how much of the package will ultimately get passed by Congress, with the "go-big" price tag and the inclusion of proposals set to be opposed by many Republicans. Biden's proposal will certainly be watered down under Congressional opposition, and there is the possibility that some taxes could rise.

Biden's "American Rescue Plan" includes a large wave of new spending, including additional $1,400 direct payments to households, more than doubling the federal minimum wage to $15 an hour (heavily pushed by Democratic progressives, led by Independent Senator Bernie Sanders), provide $350 billion in large-scale aid for state governments (more than double the amount that Republicans have said was too much in the past), higher unemployment benefits through September (an additional $400/week), an enlargement of vaccinations and virus-testing programs as deaths reach record levels and local governments expand lockdowns, and $400 billion in efforts to contain the coronavirus and speed the economy's reopening. "It's not hard to see that we're in a once-in-several-generations economic crisis," Biden said Thursday night in unveiling his plan, adding that "we have to act, and we have to act now."

All of this will be a major lift for Congress to complete by the mid-March expiration of expanded unemployment benefits for gig workers and the long-term jobless, which has created a dangerous and steep benefits cliff.

While the new administration is under pressure not to allow a repeat of the eight-month standoff that held up the last round of economic relief, many of these spending proposals will assuredly be fought vehemently by Republicans.

Negotiations could end up producing a smaller bipartisan package in the coming weeks, followed by a larger budget bill later in the year with more Democratic priorities. Biden said he plans to unveil a second major package, aimed at longer-term economic rebuilding, at a joint session of Congress next month.

One solution may be to break the relief plan into pieces, such as a more immediate, separate bill to proceed with $1,400 stimulus checks first. Provisions such as stimulus checks and a $400/week boost to unemployment insurance could be put into a budget bill and passed with just 50 Senate votes along with Vice President-elect Kamala Harris's tie-breaking vote. There is a debate about whether the minimum wage could also be raised this way. The incoming president is a veteran in dealing with what will be the Republican Senate Minority Leader Mitch McConnell, who may be willing to horse-trade for his priorities like COVID-19 liability protections for employers and/or an extension of recently approved business tax breaks.

Biden has several advantages in the struggle, including an ability to bypass Senate Republicans on some of the items using a special tool called "budget reconciliation", which allows for expedited consideration of certain tax, spending, and debt limit legislation. In the Senate, reconciliation bills are not subject to filibuster and the scope of amendments is limited, giving this process real advantages for enacting controversial budget and tax measures.

Enjoying unified Democratic control of Congress, Biden will also have the White House bully pulpit to put pressure on Congress to act. He has offered his plan as a way for the nation to come together to provide relief to impoverished Americans after the unprecedented violence in the Capitol last week, and amid the record spike in cases, hospitalizations, and deaths from the pandemic.

Given the urgency of the current crisis and the desire to achieve passage in the administration's first 100 days, a narrower package is more likely to emerge, in the vicinity of $1 trillion. According to several economists polled by Bloomberg, that figure could be enough to push economic growth above 5% alone this year, compared with the nation's current baseline of 3.5% growth.

Federal Reserve Chairman Jerome Powell said during a virtual event this week that the economy is still far from where the Fed would like it to be, particularly employment, but that "there could be quite exuberant spending and we could see some upward pressure on prices" as the pandemic recedes.

This, along with the expectations of the Biden spending package proposal rollout, caused much concern over the likelihood and timing of the Federal Reserve pulling back on its Treasury security purchasing, commencing with a tapering policy away from the current and consistent $80 billion a month in Treasury and $40 billion a month in mortgage-backed securities purchases.

This led to the bellwether ten-year Treasury yield to peak above 1.18% intraday Wednesday, before falling back to the 1.08% range by the end of the week as doubts and concerns of the passage of Biden's proposed fiscal spending package began to settle in: 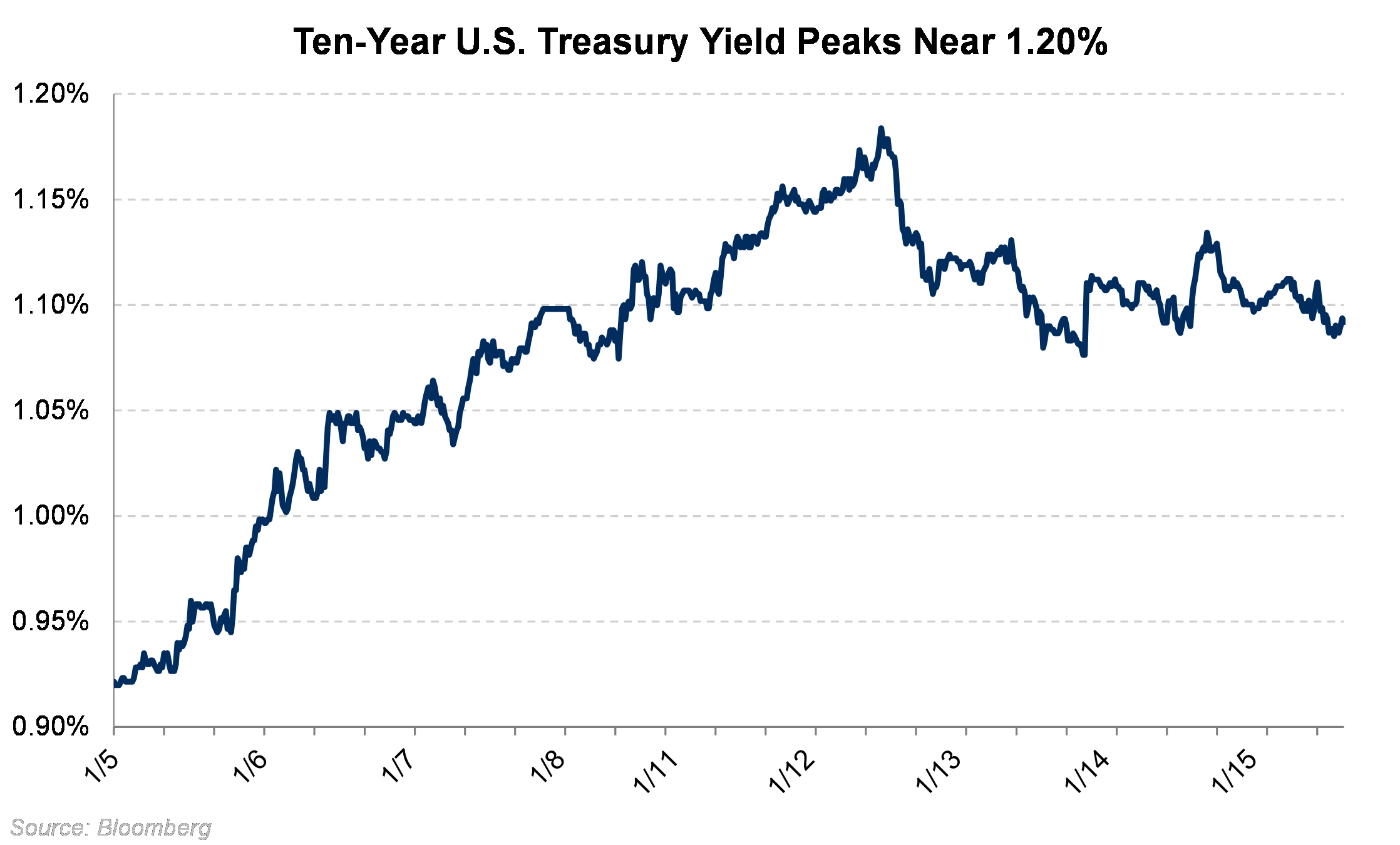 Current Fed tapering is very unlikely at this point, particularly with the unprecedented level of unemployment and state of developing permanent unemployment, an extremely difficult economic dilemma to correct. However, the Fed's buying program may soon decelerate, leading to an increase in interest rates, if inflation concerns begin to weigh on central bankers.

A comparison can be made to 2013, a tumultuous year for the Fed as it wrestled with when and how to end its controversial bond-buying program it began in response to the 2007-2009 financial crisis and recession. Policymakers managed to unveil their plan for winding down the program, known as quantitative easing, at the end of that year, but not before then-Fed chief Ben Bernanke triggered what is commonly called the "taper tantrum" when he tipped their intentions during an appearance before Congress in May 2013. Bond market concerns during this period led to a sharp rise in interest rates across the yield curve.

This tapering process continued as the new Fed Chairwoman, Janet Yellen, took office in February 2014. Yellen is the current candidate for Treasurer under the new Biden administration.

As lawmakers wrangle over details, U.S. jobless claims published Thursday painted a dismal picture and the U.S. is leading all countries in virus deaths with New York state reporting more than 200 daily fatalities for the first time since May and the nation as a whole peaked at a record of over 4,100 deaths in a single day, while global deaths from the coronavirus pandemic has topped at over 2 million souls.

First-time claims for unemployment insurance jumped to 965,000 last week, nearing its resistance level of 1 million earlier in 2020, amid signs of a slowdown in hiring due to pandemic restrictions, the Labor Department reported Thursday. The total was worse than estimates of 800,000 in new claims and above the previous week's total of 784,000: 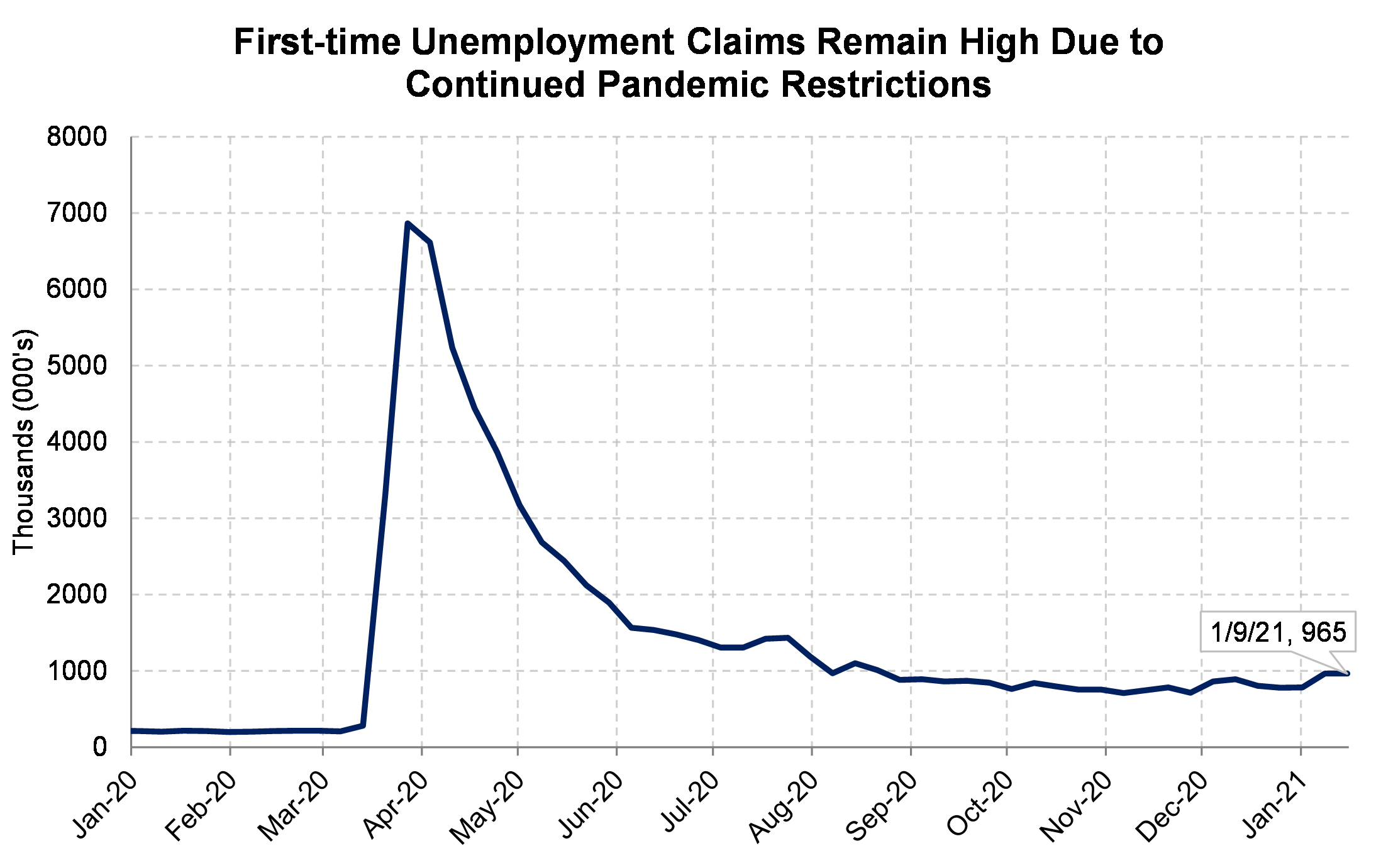 The jobless numbers for the week ended January 9th was another sign of the economic turmoil brought on by restrictions in activity aimed at combating the pandemic as the two results remain highly inter-related. This total was the highest since the week of August 22nd, when just over 1 million claims were filed.

Continuing jobless claims also were higher, rising 199,000 to 5.27 million. That figure runs a week behind the weekly initial claims total and increased for the first time since November.

To be clear, this 5.27 million figure does not reflect the actual number of Americans who are unemployed, just those who are on continued unemployment insurance. When benefits run out, the still unemployed fall off this count. In the December Nonfarm Payrolls and Unemployment monthly report released last week, the national unemployment level stood at about 10.74 million unemployed Americans. Although this has dropped over 50% from its historical peak of over 23 million in April as a result of the national lockdowns, it is still at historically intolerable levels and will continue to be a major burden to correct even if the economy heats back up to pre-pandemic levels.

U.S. retail sales declined at the close of the holiday-shopping season, wrapping up a painful year for the nation's merchants as the pandemic forced store closures and kept consumers at home.

Total retail receipts decreased 0.7% in December from the prior month after a downwardly revised 1.4% drop in November, Commerce Department figures showed Friday. The median forecast among economists expected no change in December. 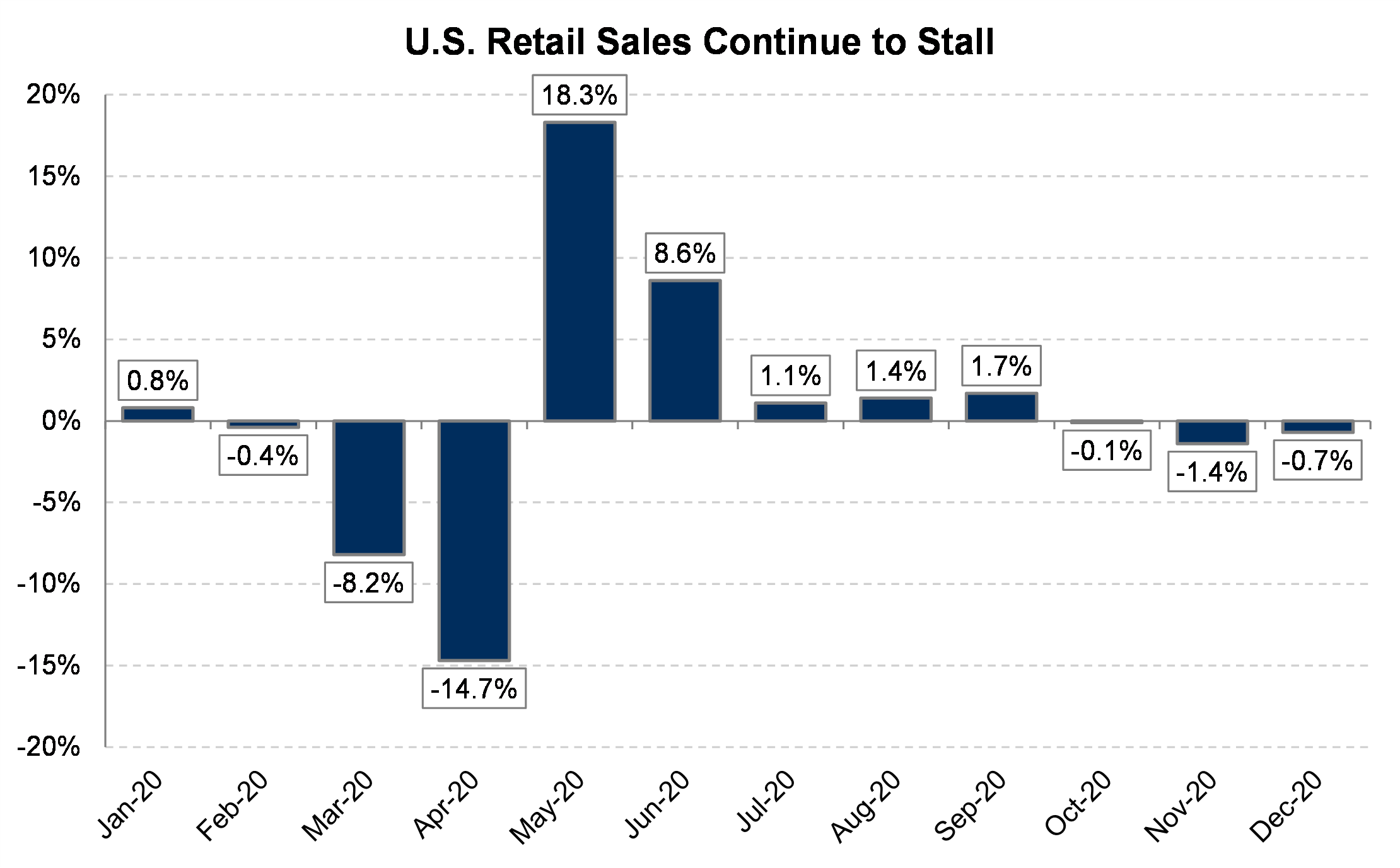 The disappointing retail results reflected weaker sales at department stores, online merchants, and restaurants, indicating the biggest part of the U.S. economy, consumer spending, took a large step back in the fourth quarter.

While the recently passed coronavirus relief package signed by President Trump in late December, which included $600 stimulus checks for individuals and extended unemployment benefits through March, will help bolster Americans' financial positions, the next several months may continue to be challenging for retailers until many more Americans are vaccinated and travel and leisure activities begin to climb back.

Certainly, Biden and Democratic leaders will argue that this drop in consumption argues for embracing the big $1.9 trillion proposed relief spending package.