Bond Market is Not Buying What the Fed Keeps Selling

Well, not literally, because that is surely still happening.

Rather, this title figuratively refers to the Federal Reserve's official release, through its Federal Open Market Committee (FOMC) and through the Fed's Chairman Jerome Powell, after meeting for two days this week, that continues to stick to its script of rising economic growth that will likely lead to modest, temporary increases in inflation.

As well, the Fed continues to espouse the need to keep monetary easing policies in place until the unemployment rate drops to a non-defined acceptable level. Included in their easy monetary policy is the maintenance of the federal funds rate target at 0.00% to 0.25% and the systematic purchasing of $80 billion of Treasury securities along with $40 billion in mortgage-backed securities (or, $120 billion in "quantitative easing") per month.

There has been no suggestion, nor subtle hint, from the Fed of targeting longer-term Treasury notes and bonds versus shorter-term ones (a "twist") to help keep a lid on rising ten-year and 30-year Treasury yields.

The bond market is strongly questioning the dependability of the Fed's forecast and continued monetary plan of attack, pushing interest rates to their highest levels since before the pandemic induced economic crisis. 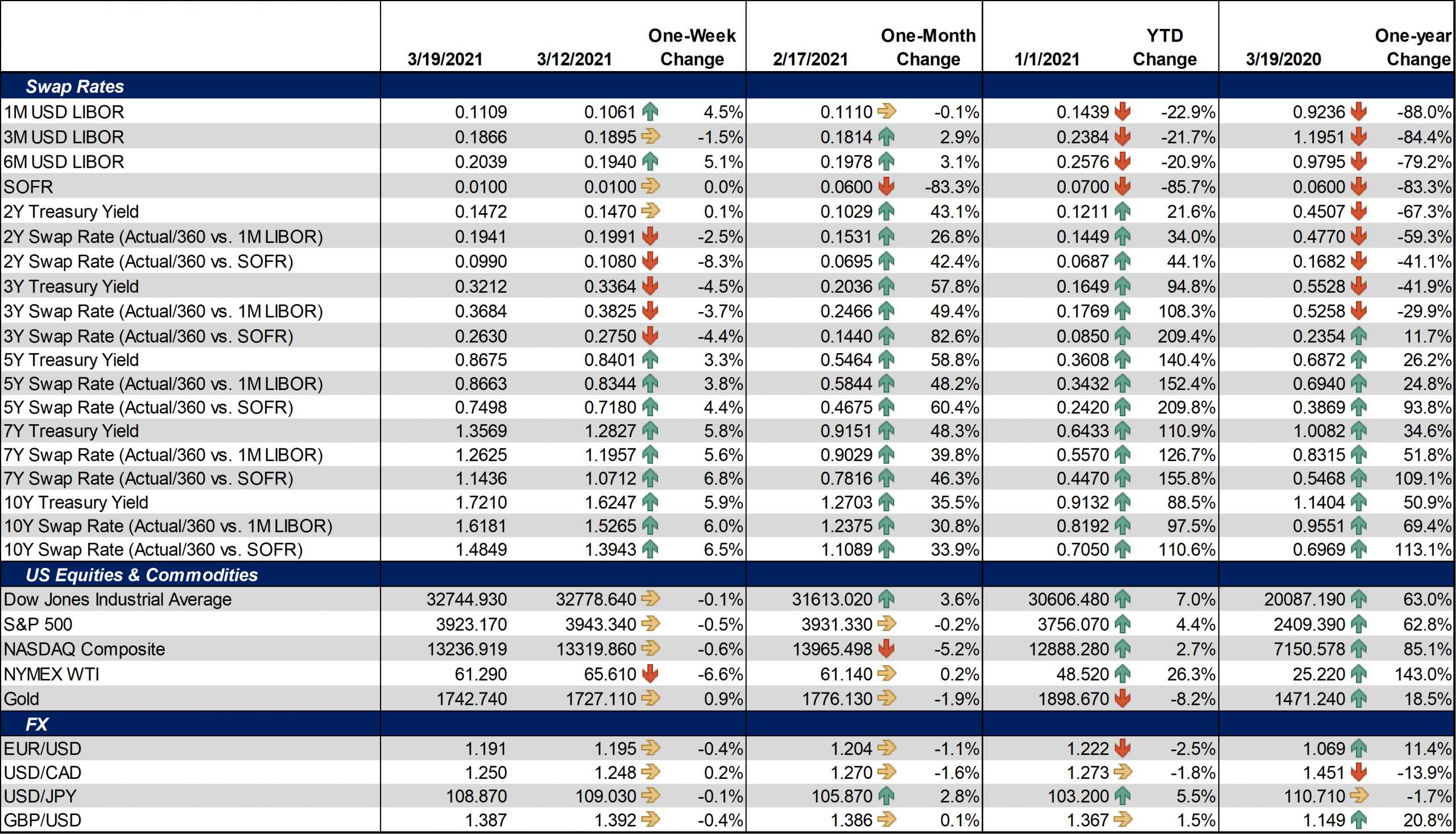 Treasury yields breached more key levels as bond traders boosted bets that the Federal Reserve will allow inflation to overshoot as the U.S. economy recovers. Yields on the benchmark ten-year note climbed beyond 1.75% intraday this week, its highest level since January 2020, while the 30-year bond breached 2.50% for the first time since August 2019. Market measures of inflation expectations are now trading near multi-year highs. 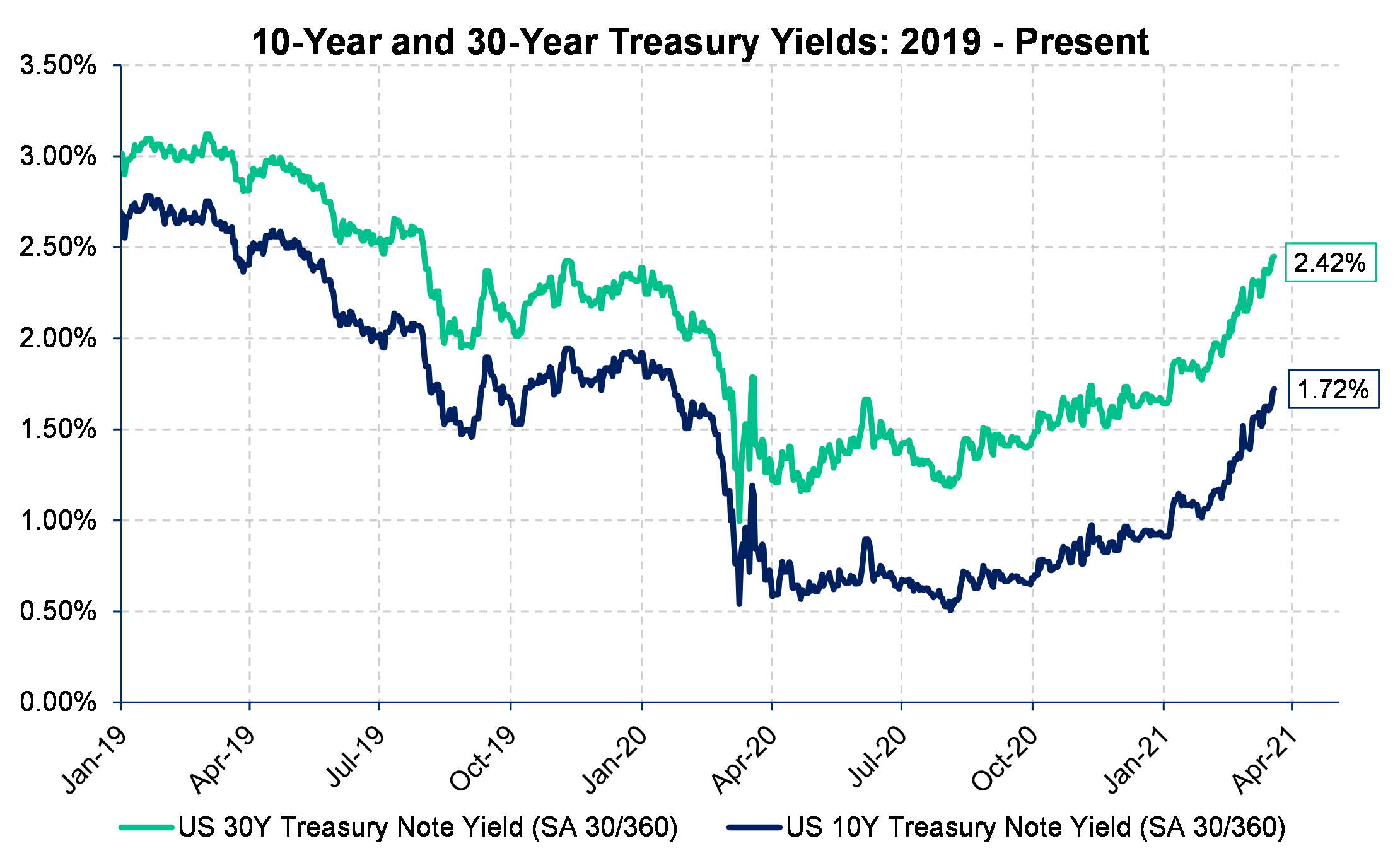 The sharp increases in longer-term yields are steepening the yield curve and puling medium term rates along with them. The five-year interest rate swap, which trades closely in line with the five-year Treasury yield, broke 0.885% (monthly, Actual/360) this week, its highest level since February 2020: 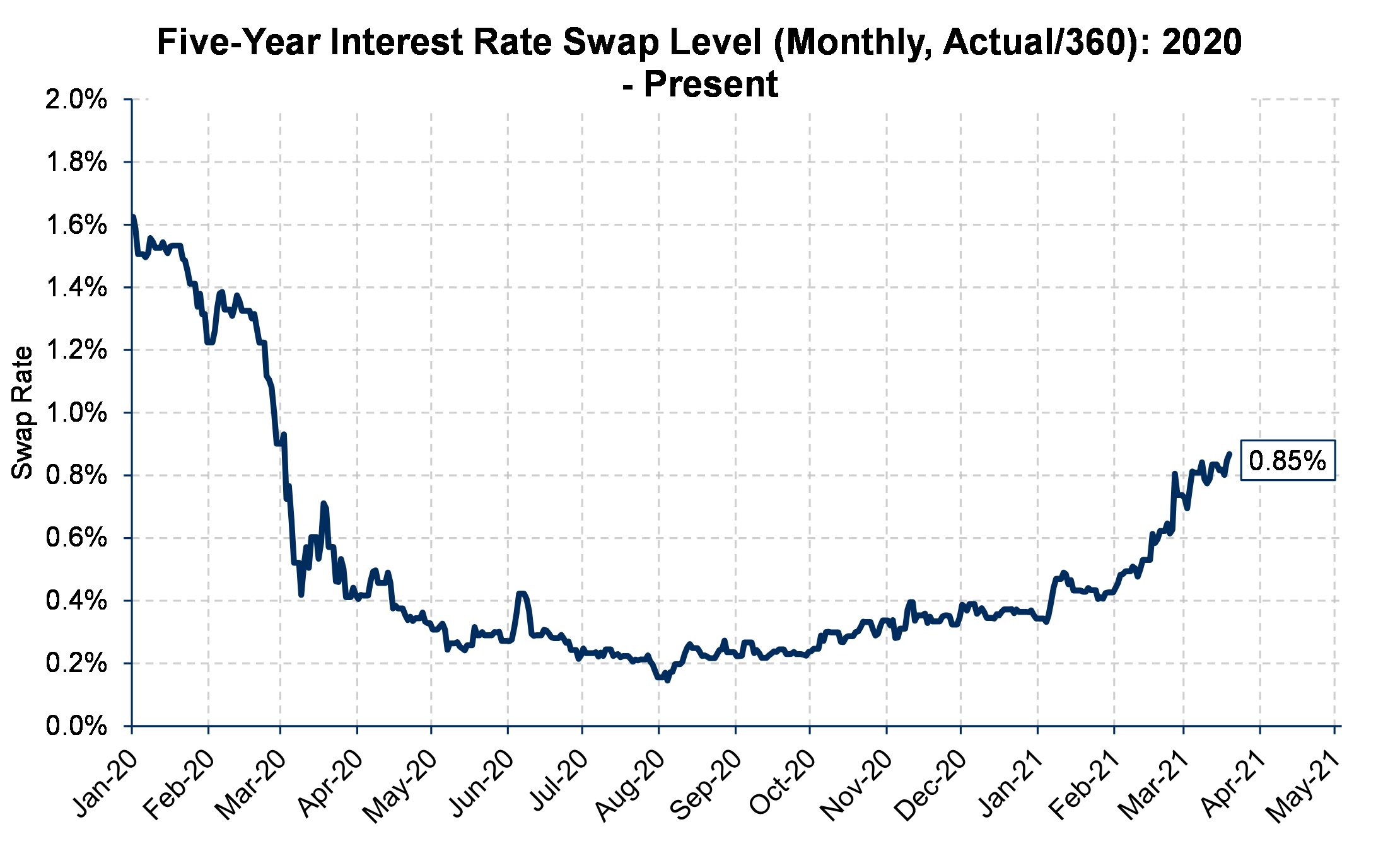 Medium and long-term interest rates have surged this year on expectations that stimulus spending and vaccine rollouts will fuel a sharper economic recovery and a pickup in inflation.

Treasury ten-year yields may easily reach 2.00% as traders are coming to the view that stronger U.S. growth, and a Fed more tolerant of higher inflation, mean there is further upside for bond yields. In fact, some outlying market strategists see the U.S. ten-year yield rising to as much as 3.00% if price increases materialize sooner than expected.

The selloff in U.S. Treasuries, fueled by inflation concerns, continue to send the NASDAQ Composite Index sharply lower from its February record high: 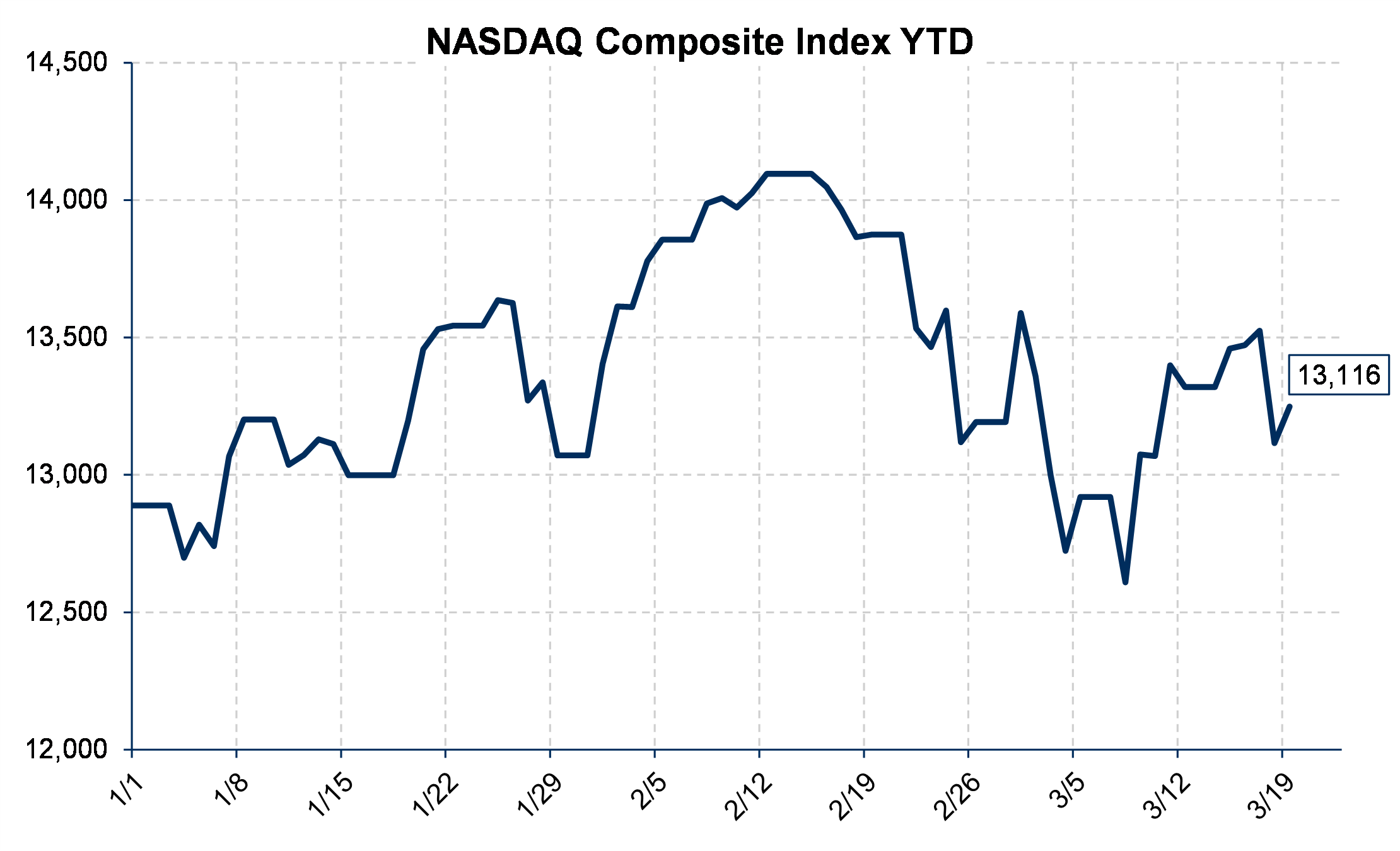 The NASDAQ 100 Index, a benchmark for high-valuation stocks that are sensitive to rising yields, has sunk nearly 7% from its February record high along with the surge in Treasury yields, while the broader equity indices of the Dow Jones Industrial Average (DJIA) and S&P 500 Index, which are comprised of more value driven, cyclical stocks, continue to set record highs: 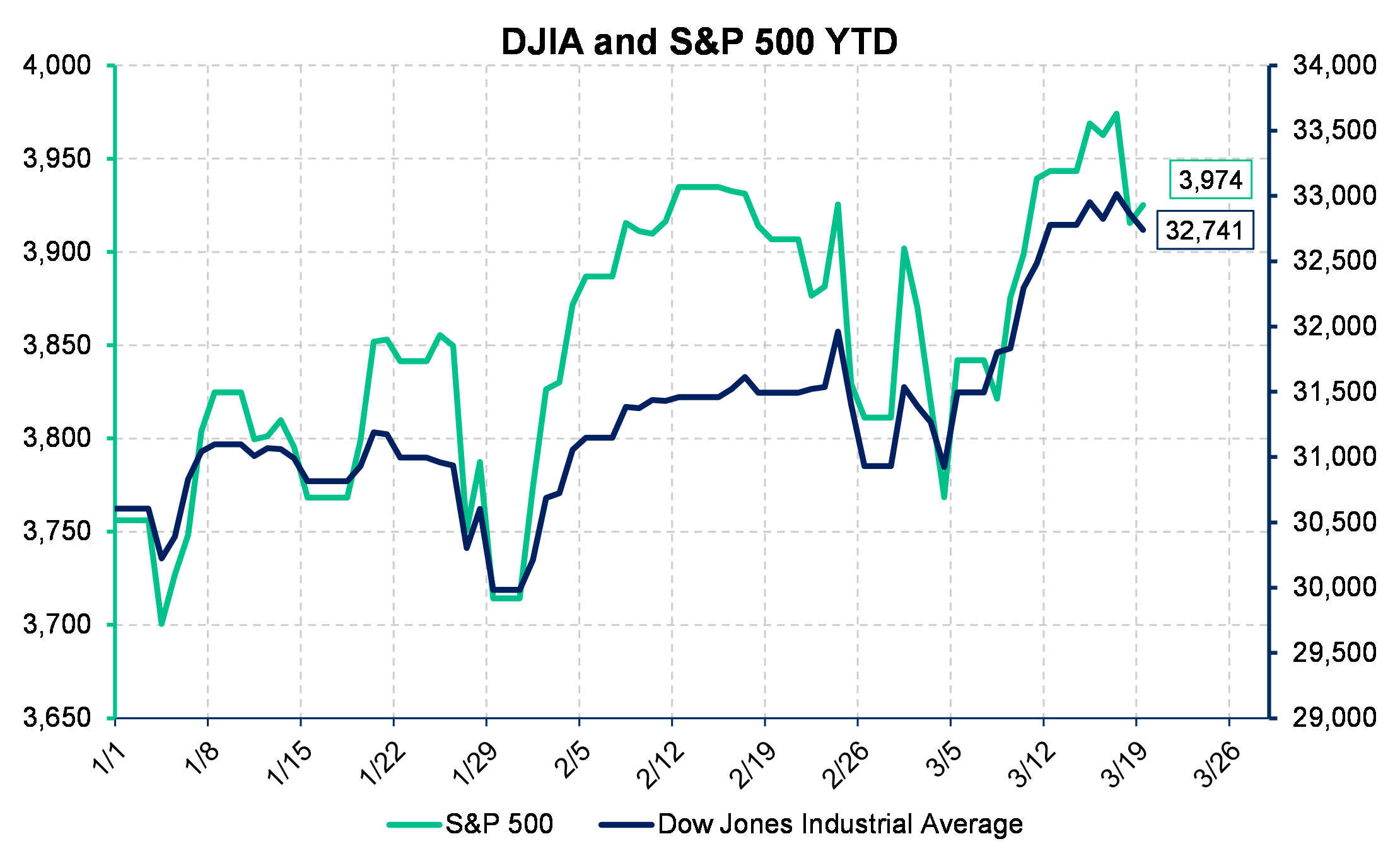 Financial markets are clearly in fear that the Fed might be too relaxed about the risks of an overheating economy and runaway inflation. Volatility in bond markets is likely to continue, fueled by the vagueness of the Fed's non-concerning reactions. Increased volatility, all else being equal, equate to increased option premiums, such as the upfront cost of interest rate caps used to hedge rising interest rates along with interest rate swaps.

The total U.S. debt to domestic GDP ratio is already over 100% and the U.S. is now paying more than ever in interest on absolute terms. Interestingly though, interest rates as a percentage are remarkably low, because America pays historically low rates for its debt. This is of course thanks to the Fed, and the bottom line is that the U.S. cannot afford much higher interest rates, especially after executing the recently signed $1.9 trillion stimulus bill. The last time the U.S. had such a large debt/GDP ratio was during World War II.

While sticking to its script and maintaining the need for the continuance of current monetary easing policies, the Fed is admitting to several green shoots arising in the U.S. economy.

The Fed sharply ramped up its economic expectations for 2021, according to the central bank's Summary of Economic Projections (SEP), also released Wednesday. Expectations for real gross domestic in 2021 has grown to 6.5%, compared with its 4.2% forecast from its December FOMC meeting. Further, the Fed estimates the unemployment rate will fall to 4.5% in 2021, below the previous estimate of 5.0%. Beyond this year, the FOMC expects the unemployment rate to drop to 3.9% and 3.5% in 2022 and 2023, respectively.

The central bank now sees inflation running to 2.4% this year, above its previous estimate of 1.8%. But again, the Fed is steadfast in seeing this inflation increase as transitory and still within its other undefined target of averaging 2.0%.

Despite dialing up its economic growth expectations, the Fed continues to signal that there are no expected short-term interest rate hikes for the next two years.

Every quarter, members of the FOMC forecast where interest rates will go in the short, medium, and long term. These projections are represented visually the chart below called a "dot plot":

What this dot plot shows is that most of the 18 FOMC members are still expecting to keep the fed funds target near zero through 2023.

FOMC attitudes are thus changing, albeit slower than market expectations.

Fed to allow SLR relief to expire as scheduled

Another major move by the Federal Reserve, announced Friday, will be the expiration of a significant capital break for big banks. The reprieve was granted last April as a response to the burgeoning coronavirus that spiked bank reserves that were triggered by the government's fiscal interventions during the pandemic. The relaxation of including these reserves in banks' supplementary leverage ratio (SLR) allowed lenders to load up on Treasuries and deposits without setting aside capital to protect against losses. Despite huge hopes and massive lobbying, this temporary allowance will expire March 31st as planned, to the great displeasure to the largest domestic banks with the largest Treasury holdings and deposit bases.

Without getting into too much technical detail, the bottom line here is that banks will be less willing to purchase Treasury securities, decreasing demand and thus potentially increasing yields. In addition, banks may be resistant to accepting certain types of deposits that were being excluded from the SLR. This will certainly be an interesting effect — banks, in certain circumstances, saying "no thank you" to new deposits.