COVID-19 Is Once Again Playing a Role in Market Volatility

The global coronavirus pandemic may be improving, particularly in the United States, but it is far from over and has begun to drag down many financial markets on renewed fears fueled by spreading COVID variants.

On Thursday, the world officially broke the 4 million mark in deaths from COVID-19, and some estimates for the real number that include unaccounted virus-related deaths range from two to as much as over four times this number. Regardless of the actual count, there is clearly a rise of hotspots around the world, primarily because of the extremely contagious COVID-19 Delta variant and a lack of supply of vaccinations outside of the U.S. Given this problematic news, markets began to pull back this week from several growth and reflation trades on fears of a global and domestic slowdown from the sharp bounce the U.S. has seen from the lows of the pandemic-induced economic collapse.

In the equities markets, more investment flows have returned to the more pandemic-suited tech stocks and away from growth stocks. Interest rates, particularly medium and longer-term rates, have fallen. The bellwether ten-year Treasury yield has tumbled over the past month from around 1.60% to the 1.30% range to end the week. The U.S. dollar has also been slipping back since its run up in mid-June.

In addition to the pessimistic tone taken by several markets due to the trending COVID-related threats to an economic rebound and growth, applications for unemployment insurance edged up last week as the American labor market truly grinds its way back toward full recovery.

First-time jobless claims totaled 373,000 for the week ended July 3rd, compared with the consensus market estimate of 350,000. Furthermore, the previous week’s level was revised up slightly by 7,000, from 364,000 to 371,000. The level of continuing claims, the measure of ongoing benefits, decreased to 3.34 million, down 145,000 from the previous week’s revised level. Despite the uptick in first-time applicants, the decreased number of continuing claims represented the lowest level since the onset of the pandemic in March 2020.

On this news, the ten-year Treasury yield dipped below 1.25%:

Furthermore, the slope between the two-year Treasury yield and the ten-year Treasury yield, a closely watched gauge for future economic growth and higher interest rates, has been edging downward closer to 100 bps (1.00%), a key technical level for this indicator: 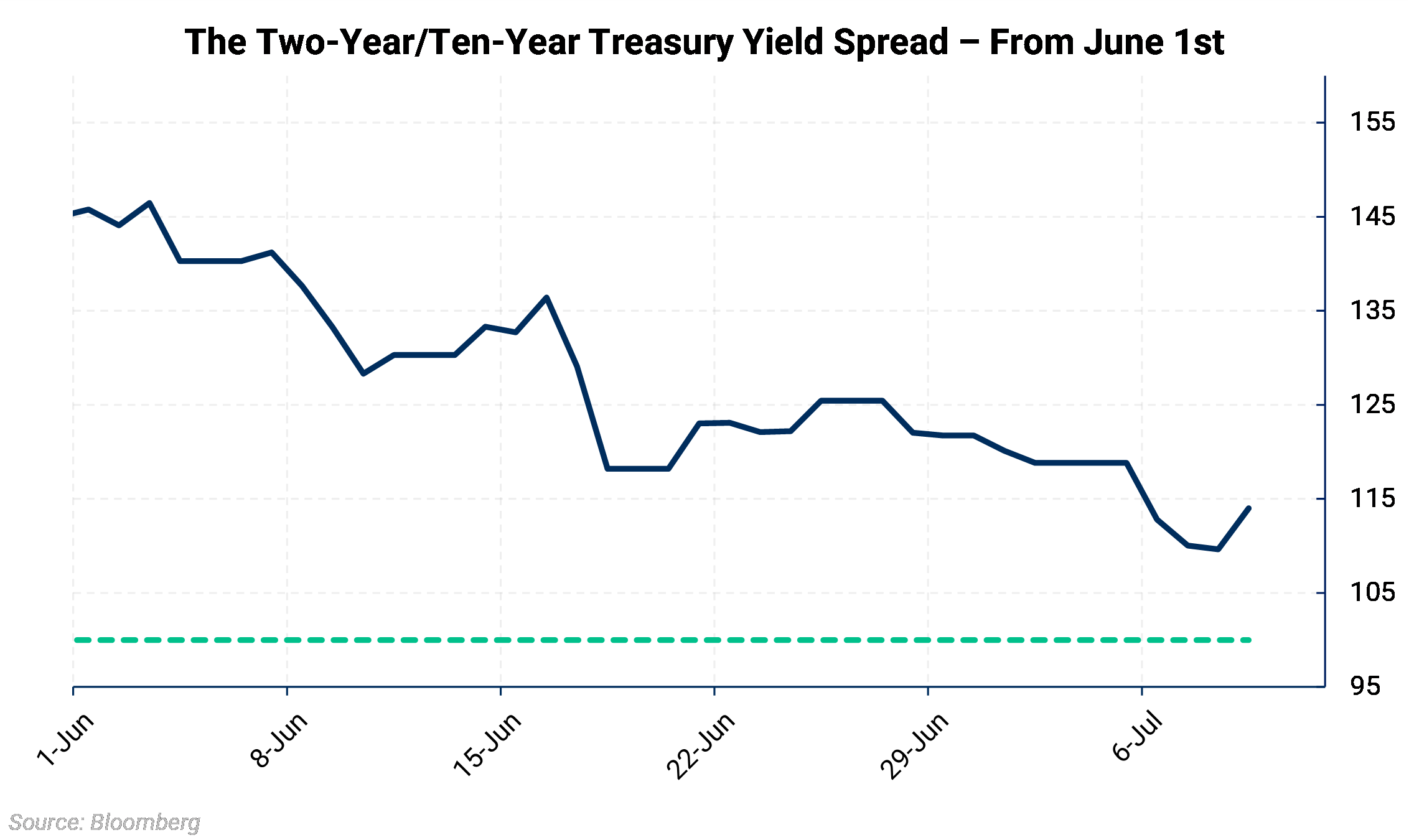 Shorter-term money market borrowing yields, such as LIBOR and SOFR, continue to show little change and remain in the range of 5 to 15 bps (0.05% to 0.15%) for one day to six months, respectively.

The minutes from the June Federal Open Market Committee (“FOMC”) meeting show Federal Reserve officials debated how and when to start pulling back their extraordinary support for an economy growing much stronger than they expected earlier this year. The minutes also revealed the degree to which the policy makers revised their economic outlook due to a double-barreled boost from vaccinations and fiscal stimulus as well as bottlenecks and supply shortages. Several members favored tapering mortgage-backed securities faster than Treasuries. The minutes show little alarm over inflationary pressures.

Fed Chairman Jerome Powell has not commented on whether the central bank has met its inflation goal, but his recent remarks have suggested the Fed's leadership believes its goal of average 2% inflation has, or will soon, be satisfied. That would make officials' assessments of when the economy has returned to their undefined level of maximum employment as the final threshold to determine when to raise rates.