Producers in the Bakken have enjoyed a fairly reasonable discount of about -$2/Bbl to WTI for the past few years. However, there are now ongoing concerns regarding the play's largest crude oil takeaway option, the Dakota Access Pipeline (DAPL).

DAPL, the 575 MBbl/d pipeline that transports Bakken crude to Patoka, Illinois, was ordered by a Judge in July to shut down, pending an additional environmental review. The pipe had been transporting oil for three years. A month later, a federal appeals court reversed the judge's ruling to shut the pipe, while the environmental review took place.

There have been additional challenges from indigenous tribes as recent as last fall while Dakota Access's appeal of the July ruling is still pending before the D.C. Circuit, where oral arguments took place on November 4.

There are new fears that a new Biden administration would also target the Energy Transfer-owned pipeline with executive action much like it did with the Keystone XL pipeline. DAPL is somewhat different in that it is already up and running. Biden has not publicly spoken about DAPL, but according to The Guardian, Kamala Harris signed an amicus brief last May and joined tribes in calling on a judge to shut it down while an environmental impact study is conducted.

There is concern among some producers in the Bakken that if DAPL were removed the region's crude price spreads would suffer. The answer is of course yes, it would force the shippers to find other more expensive ways out of the basin. The chart below shows Bakken oil production progression along with the available oil pipeline takeaway capacity plus the small amount of refining demand in the area. Prior to the COVID-19 and Saudi supply-induced oil price crash in early 2020, Bakken oil production was over 1.4 MMBbl/d and testing the region's crude outlets.

DAPL (blue area) accounts for a sizable portion of pipeline capacity and is critical for the shale play's oil prices. The extra capacity and narrow differentials brought by the pipeline had enabled production growth. DAPL had been operating at or near capacity before production took a plunge last year, and owner Energy Transfer is already constructing an expansion (shaded blue area) to raise the system's takeaway to 1.1 MMBbl/d. The expansion is due to be completed in 3Q2021, according to S&P Global Platts. 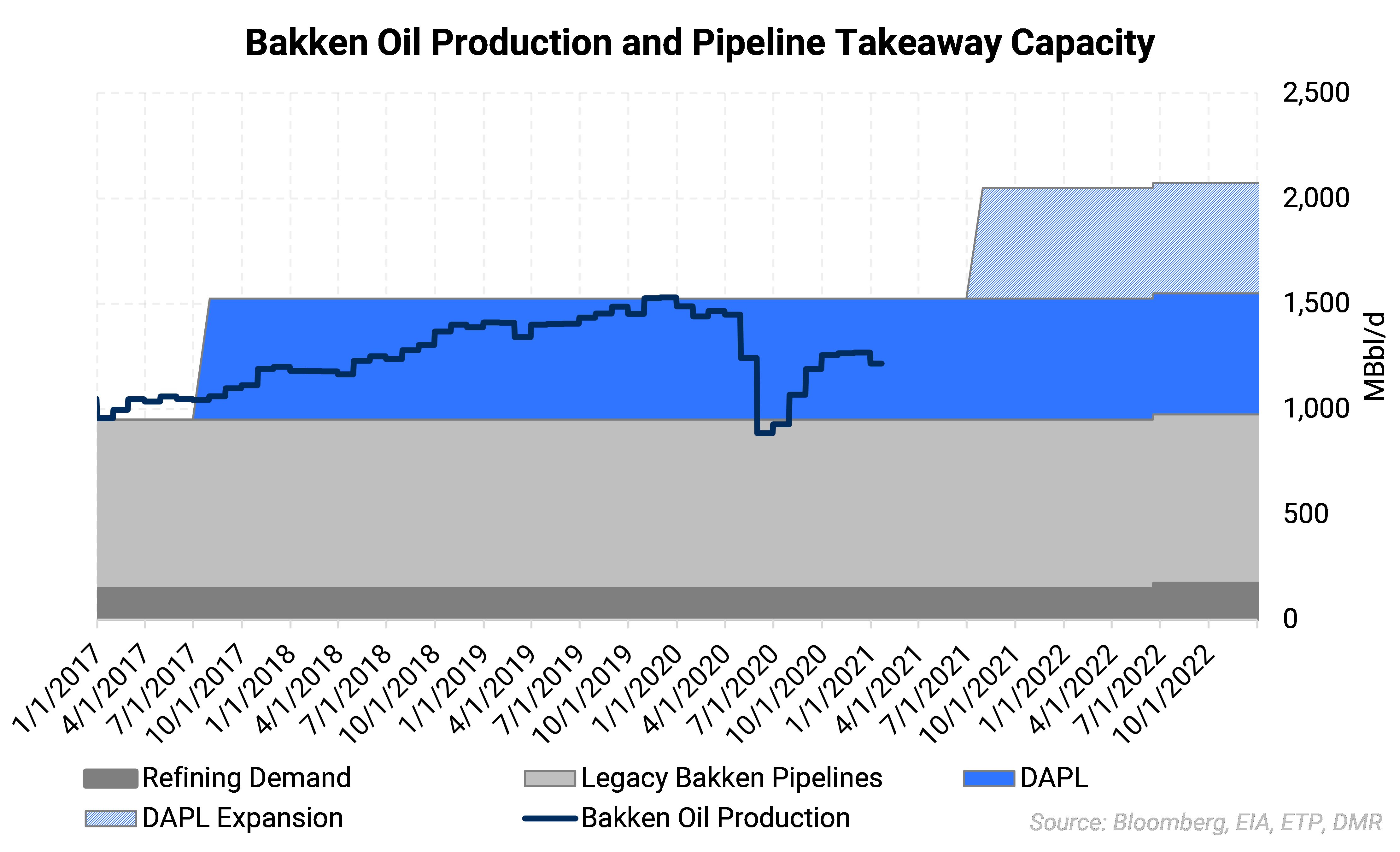 In the past, expensive crude-by-rail has become necessary when production outpaced pipeline takeaway. The chart below shows crude-by-rail (CBR) shipments from Petroleum Administration for Defense Districts Two (PADD 2) in the Midwest to PADD 1 (East Coast), PADD 3 (Gulf Coast), and PADD 5 (West Coast), according to the EIA.

The EIA reports rail shipments when oil on rail moves to other regions or PADDs. We can assume a vast majority of the shipments coming from PADD 2 are originating in the Bakken.

There is a large dip in CBR shipments out of PADD 2 in mid-2017, coinciding with the start-up of DAPL. Bakken spreads tend to widen out when the higher-cost rail is highly utilized and tighten when there is ample pipeline takeaway capacity. 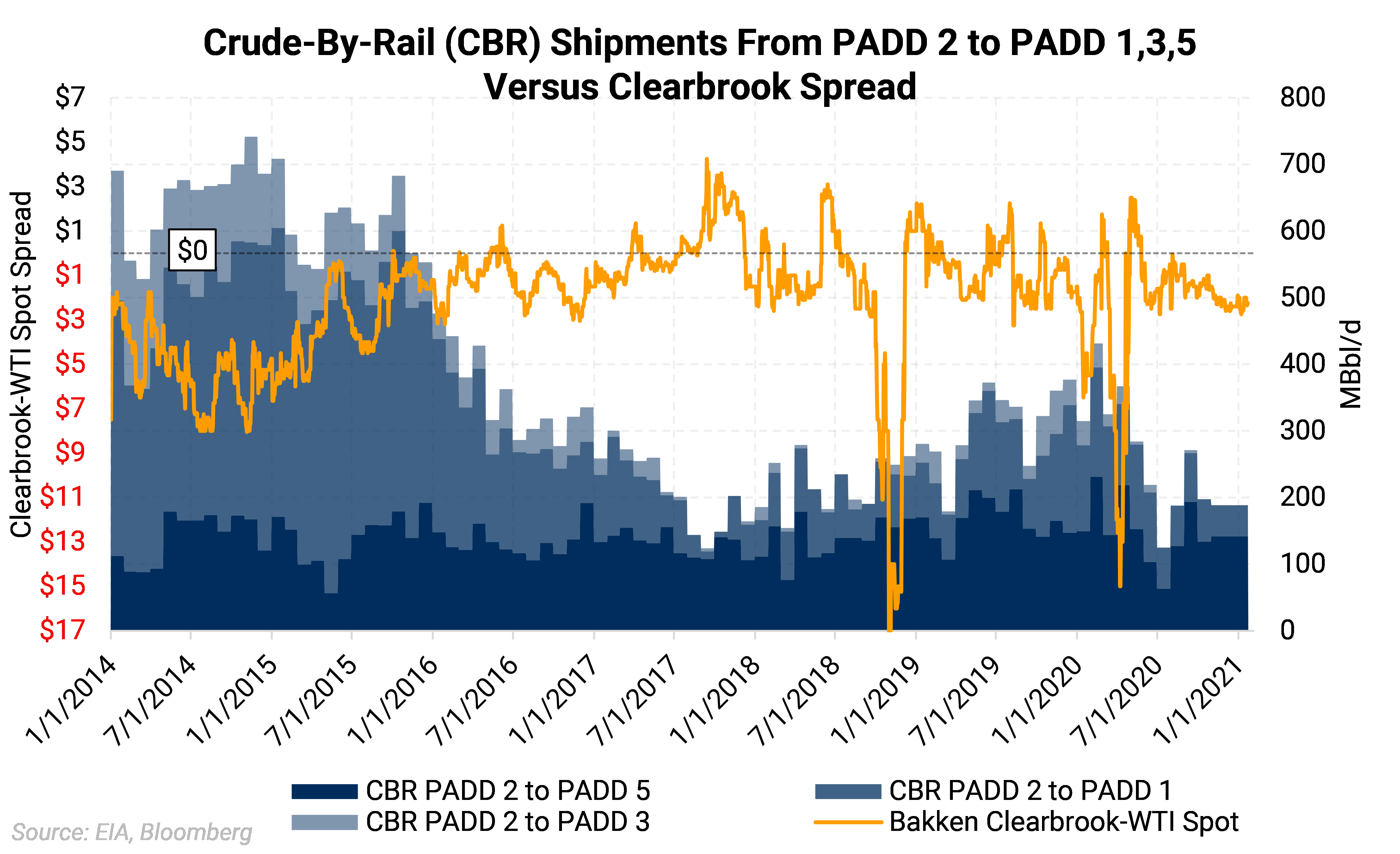 There is an unfortunate reality when it comes to hedging Bakken crude at either Clearbrook and Guernsey. The financial forward market for Bakken oil differentials is rather illiquid. It can be challenging to find a counterparty to even quote a market. There are some banks or merchants that will make a market. However, in our experience, the bid-ask spread has often been quite wide and unattractive to a producer due to lack of liquidity. AEGIS can help advise on a plan that may include mitigating risk from a physical standpoint as the financial instruments for Clearbrook and Guernsey are lacking.