The Federal Reserve Chairman Jerome Powell said in prepared remarks Friday at The Jackson Hole (Wyoming) Economic Symposium that his forecast is for the economic environment to be sufficiently equipped for the central bank to at least begin cutting its asset purchases later this year, aligning himself with most of the Federal Reserve System’s presidents and most fixed income market participants, but that rate hikes were still far off. Nevertheless, Powell also cautioned that the tapering of the Fed’s current $120 billion per month quantitative easing program should be seen as a signal that the Fed will raise interest rates.

But when, and how swiftly? The markets will have to continue to wait and see.

Fed Chair Powell said in his remarks that the Fed has seen “substantial further progress” on its goal for inflation, referring to the benchmark the central bank has used (inflation to “average” 2%) to signal when it will start to tighten its easy money policy. The personal consumption expenditures gauge, or the PCE price index, which the Federal Reserve uses to gauge inflation more so than the PPI and CPI measurements, reported this week to have climbed 0.4% in July from June, and 4.2% from a year ago, well above the Fed’s 2% goal. The core PCE price index, which excludes food and energy prices, rose 0.3% in July from its upwardly revised gain in June. The measure was up 3.6% from a year earlier, matching its biggest jump since 1991:

In addition to addressing inflation and the tapering of Treasury and mortgage-backed security purchases, Powell also discussed the other major economic dilemma facing the Fed, that being unemployment. Powell said that there “has also been clear progress toward maximum employment,” but clearly stopping short of saying that goal has been met. In fact, Powell went on to state that rate hikes aren’t imminent as there is still “much ground to cover” before the economy hits the ubiquitous level of “full employment”.

Powell noted that the delta variant of COVID “presents a near-term risk” to getting back to full employment, but he insisted that “the prospects are good for continued progress toward maximum employment.”

He added that some of the factors that have pushed inflation higher are starting to abate, though several regional Fed presidents have recently stated that they see lasting price pressures in their respective districts.

The Fed’s tapering decision and the subsequent tightening decisions are clearly two separate decisions based on differing data sets and schedules. As Powell concluded in his remarks, “the timing and pace of the coming reduction in asset purchases will not be intended to carry a direct signal regarding the timing of interest rate liftoff, for which we have articulated a different and substantially more stringent test.”

Despite the reinforcing statements about Fed asset purchase tapering, this Fed action has already been priced into the rate markets. Given this, and the disappointing vagueness of the timing of the eventual rise in short-term borrowing rates, the fixed income market had little reaction to Friday’s events. In fact, Treasury rates slid lower Friday after the conclusion of all these mentioned declarations, after rising throughout the week in anticipation that more monetary tightening information, particularly on rate increases, would result from the symposium: 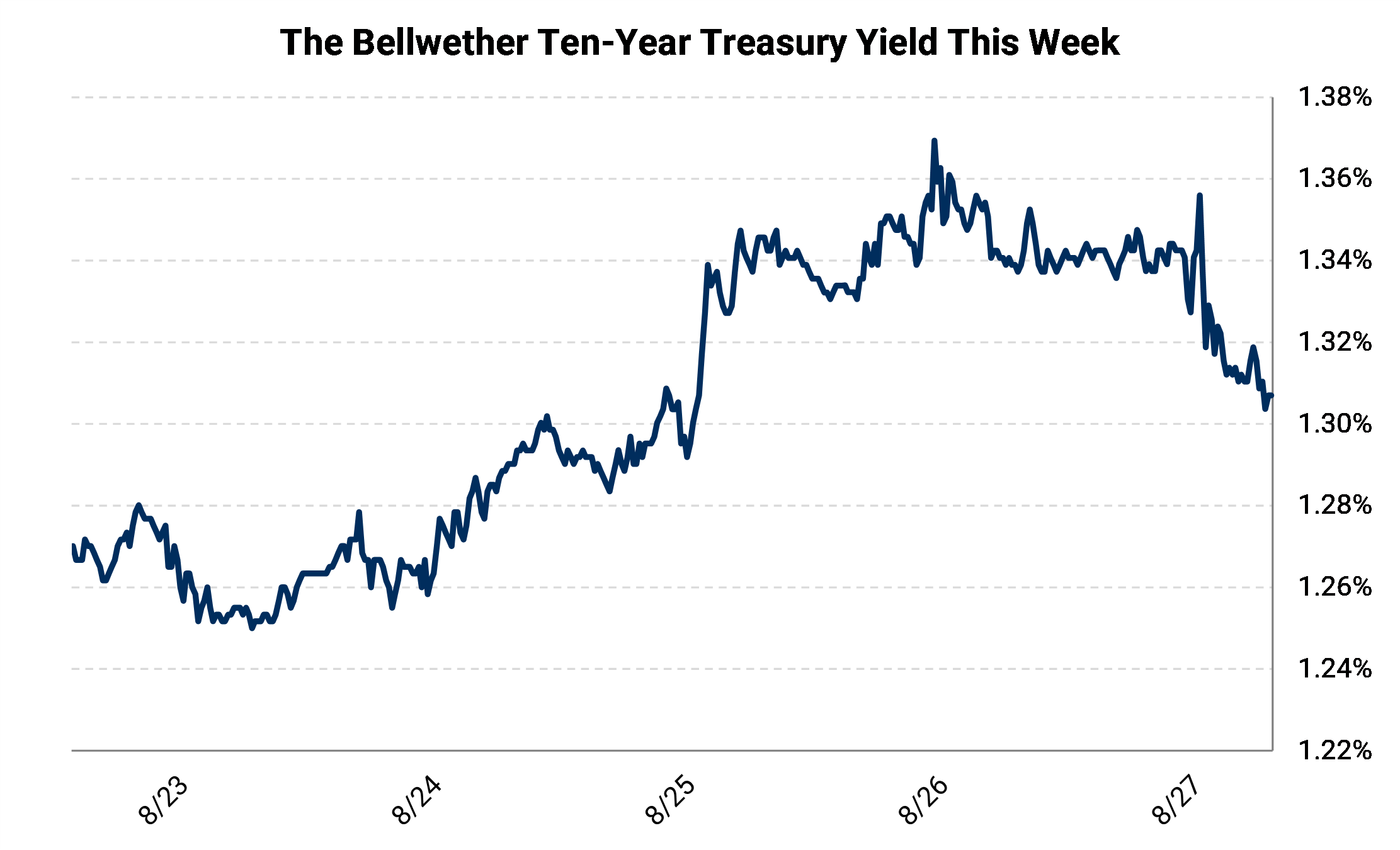 Along with the decline in Treasury yields, so did interest rate swap levels slide downward. In fact, the five-year swap rate has been trading within a declining channel since the rate market’s recent high at the end of March: 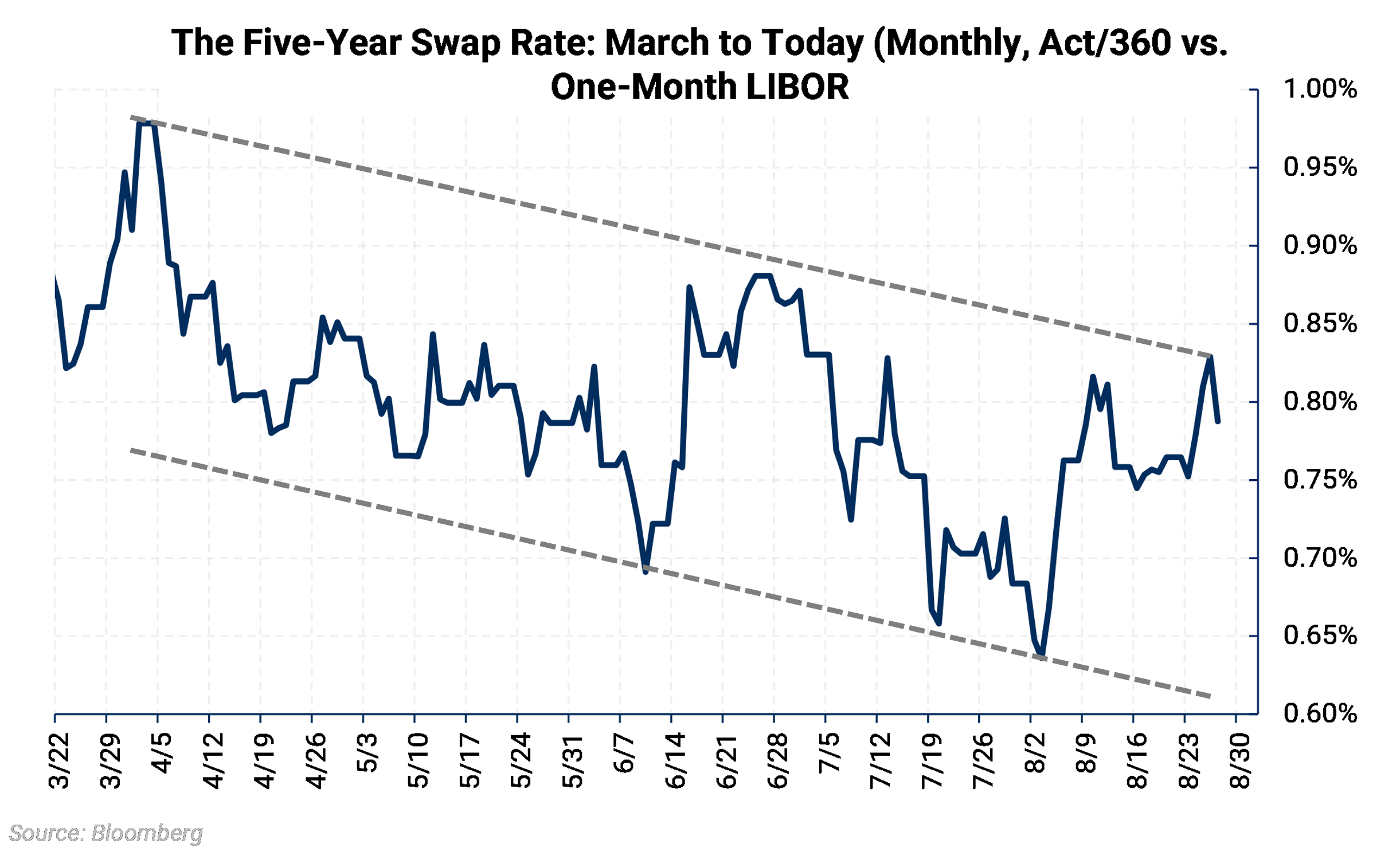 Given the recent reprieve in rates even as quantitative tightening proclamations are starting to unfold (including from the main man himself) along with the backdrop of rising inflation that may, or may not, be transient in all cases, this should be viewed as an opportunity to lock in future floating-rate liabilities before rates across all maturities start to increase in the market from the anticipation of Fed rate hikes, let alone when they eventually occur.