Fed Votes to Commence Tapering, Payrolls Surprise to the Upside

As anticipated, the Federal Reserve, through its Federal Open Market Committee (“FOMC”) meeting, voted to commence a cutback in its systematic quantitative easing program, or “taper”.

The U.S. labor market got back on track last month with a larger-than-forecasted and broad-based payrolls gain, indicating greater progress filling millions of vacancies as the effects of the coronavirus Delta variant fade.

Despite these two major macroeconomic events, the end of the week saw rates decline, with the bellwether ten-year Treasury yield falling below 1.45%, it’s lowest yield since late June. This rate slide is seen as being temporary.

Starting this month and into December, the Fed will curtail its $120 billion/month in asset purchases ($80 billion in Treasury securities and $40 billion in mortgage-backed securities, or “MBS”) by $15 billion, reducing Treasury purchases by $10 billion and MBS purchases by $5 billion each month. This puts them on an eight-month pace to fully reverse this emergency easing activity put into place at the height of the pandemic-induced economic collapse.

In a sign of divergence emerging within the Fed about the persistence of inflation, the Fed left the door open to speeding the rate of tapering of asset purchases after its scheduled December meeting. Any acceleration of this unwinding will most likely be gauged to inflation, setting the course for less than its current eight-month pace. Of note, the FOMC tweaked its official statement on inflation, arguing that although they still believe that currently elevated inflation will be temporary, it may in fact not be. Federal Reserve Chairman Jerome Powell underscored this high level of uncertainty regarding inflation in his post-meeting speech. Chair Powell said that he expects inflation to slow in the first or second quarter of 2022, much later than the Fed previously indicated. He suggested that it is possible we could reach full employment in 2022, which would justify rate increases in the second half of 2022. This will most likely be the case regardless, even if inflation moderates before then.

Once the Fed completes this curtailment of quantitative easing, the next focus will be on raising short-term borrowing rates, such as LIBOR and SOFR. The forward curve has two federal funds increases (of 0.25% each) priced in for 2022. Many market forecasters are calling for as many as three rate hikes before the end of next year.

Nonfarm payrolls increased 531,000 in October after large upward revisions to the prior two months. The unemployment rate fell to 4.6% from its previous monthly level of 4.8%, while October’s labor force participation rate was unchanged. Average hourly earnings came in line with estimates, rising the most since February. 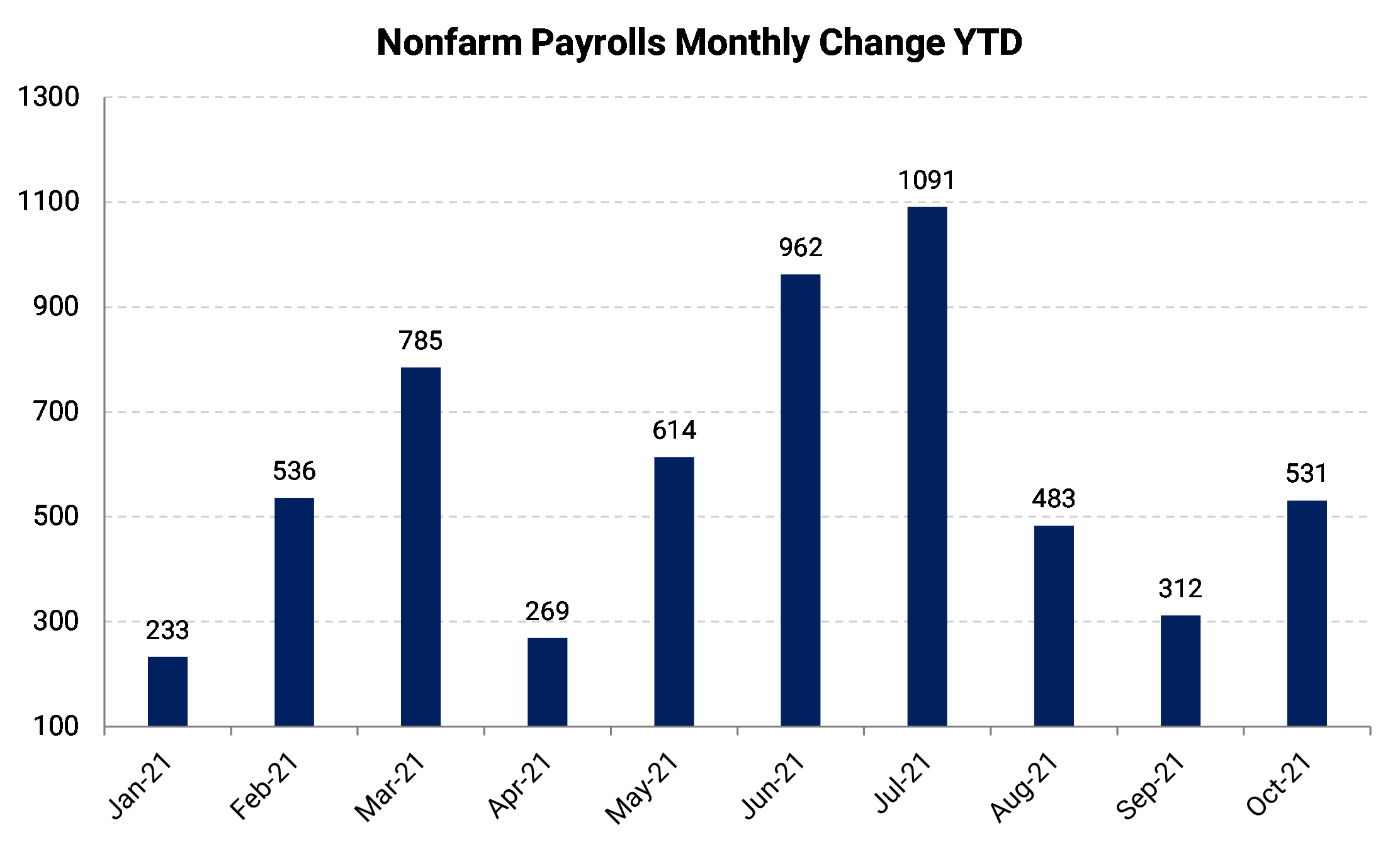 Payroll gains last month were broad based and led by increases in leisure and hospitality. Professional and business services, transportation and warehousing, and manufacturing also posted significant advances. Hiring at temporary help services rose the most since February, indicating companies are having success luring workers for the holiday-shopping season.

Although the payroll report came out higher than expected, it was not high enough to make the market believe the Fed will act faster on their recently announced tapering plans and eventual rate hikes. This led to a rally in Treasury securities and accompanying fall in Treasury rates at the end of the week. The ten-year Treasury yield fell below 1.45% Friday, its lowest level since late June, and 25 basis points (0.25%) off its recent high of just over 1.70%: 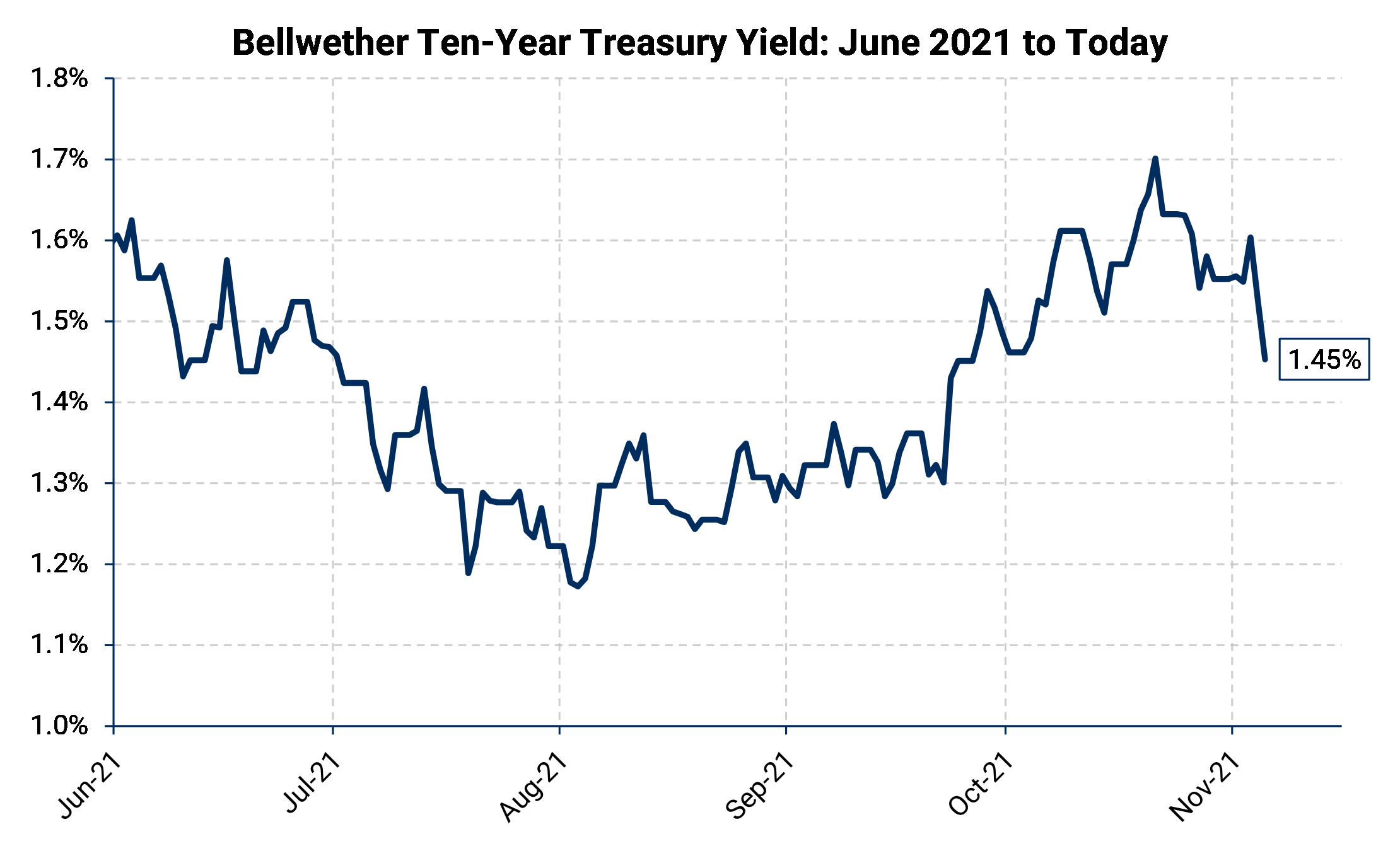 Despite this market reaction, this rally is expected to be short-lived with the future direction of interest rates, both in the near-term and in the longer-term, to be upwards for all rates out to at least 20 years, with short-term rates rising next year in anticipation of the Fed’s federal funds expected rate hikes.

The Bank of England (“BoE”) kept interest rates on hold this week during their central bank meeting, surprising investors who had been convinced that it would be the first of the world's big central banks to raise borrowing costs after the COVID-19 pandemic. The BoE kept alive the prospect of a move soon, saying it would probably have to raise its Bank Rate from its all-time low of 0.1% "over coming months" if the economy performed as expected. Their hesitancy was primarily driven by concern over what immediate rate hikes would do to the fragile labor markets in Great Britain, despite forecasts for inflation increases to over 5% in early 2022.

The yield on two-year British government bonds fell by the most since the day after the Brexit vote in 2016. This was a clear sign of the dovishness of the BofE and the prioritization of employment over “temporary” inflation, not dissimilar from the stance of the U.S. Federal Reserve. By not raising rates as expected, the value of the British pound sterling fell, supporting the recent strength in the U.S. dollar: 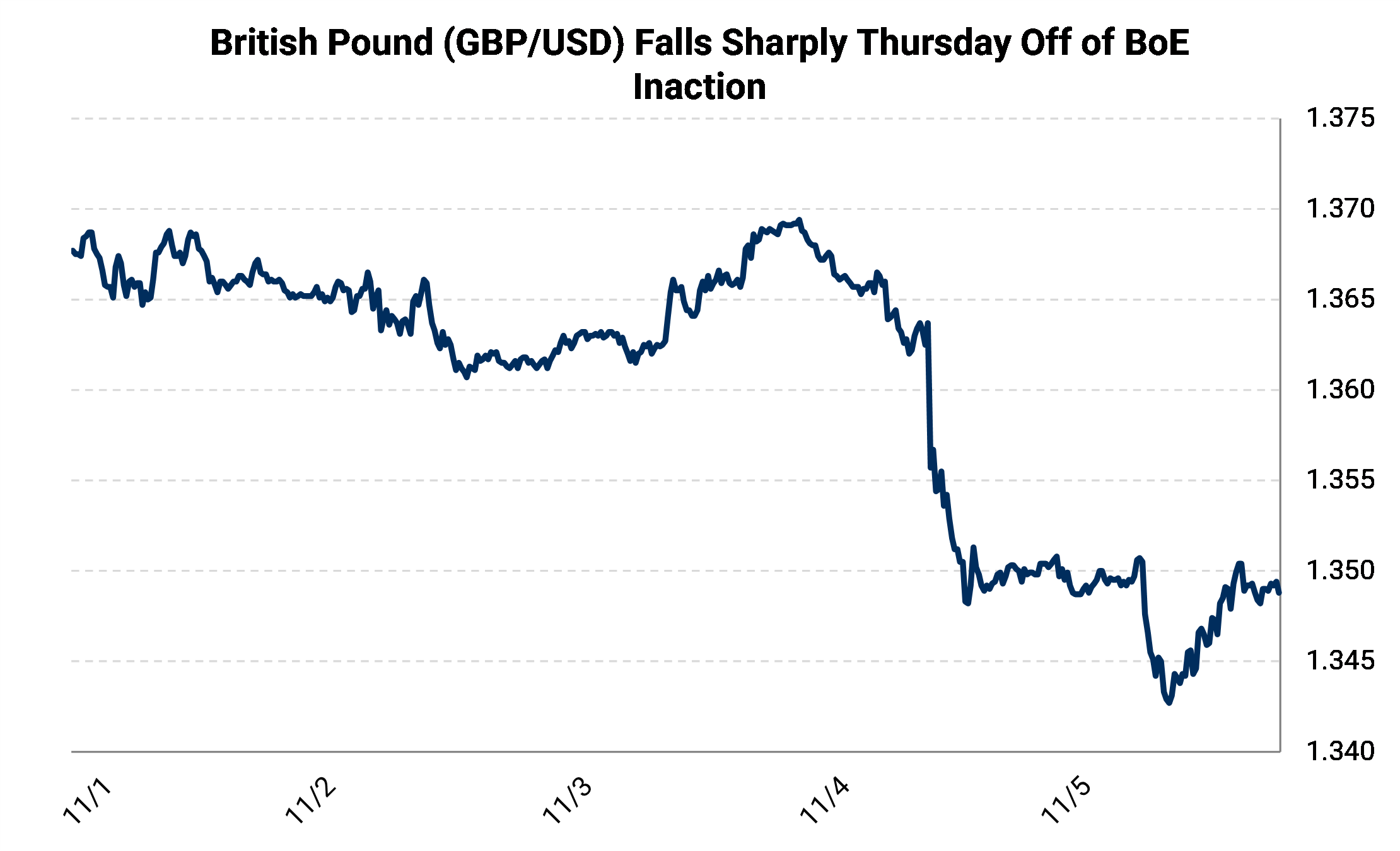 Similar to the posture taken by the BoE, the Reserve Bank of Australia, Australia’s central bank, decided this week at its monthly policy meeting to keep its cash rate also at 0.1%. However, inflation in Australia is not as big of a concern as it is in Great Britain nor in the United States.