This sentiment is neither unusual nor unexpected. But timing-wise, the fact that these official views have openly been discussed and recorded during the formal FOMC meetings is a strong signal that changes to monetary policy are finally on the Fed’s radar, with tapering seemingly being the first step. The ten-year bellwether Treasury yield shot up to nearly 1.70% on this news, while the five-year interest rate swap rose to roughly 0.85%.

The FOMC’s comments on tapering pushed pricing in the interest rate markets on the prospects for future federal funds rate increases, which investors generally expect to begin six quarters after tapering commences. Despite this backdrop, one-month and three-month USD LIBOR hit record lows again this week, to 0.09163% and 0.14700%, respectively. Treasury bill yields are slightly negative out to July 8th. The lows in these short-term financing rates are reflective of the current funding market that continues to struggle with large amounts of cash in the banking system and the significant slack in loan demand.

Treasuries were supported later in the week as extreme volatility in cryptocurrencies weighed on stocks, especially those in the technology sector, leaving investors to park funds into safer Treasury securities, alleviating some of this week’s upward pressure on their yields and swap rate levels. 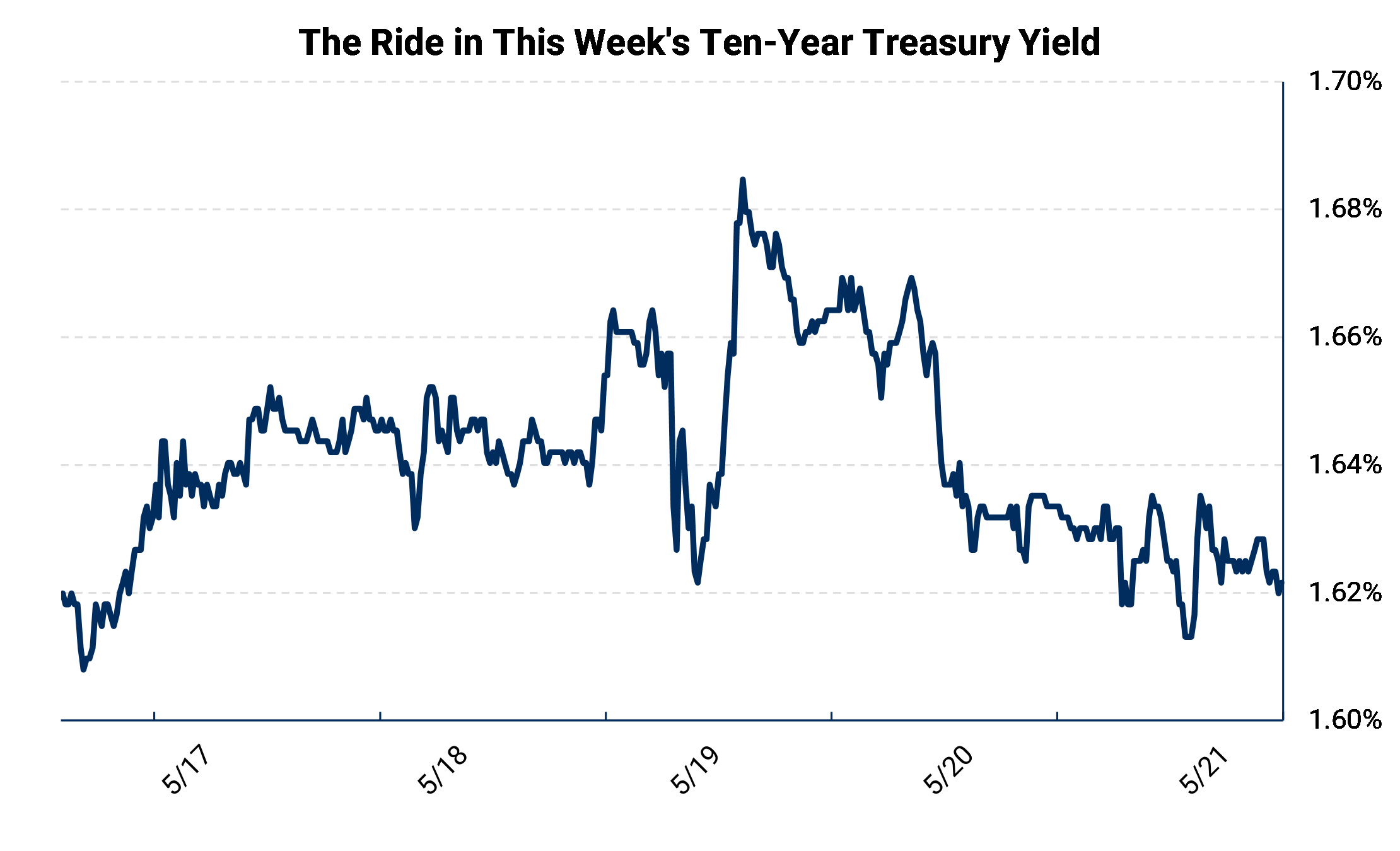 Federal Reserve officials at their April meeting said a strong pickup in economic activity would warrant discussions about tightening monetary policy. The meeting summary included the statement that “a number of participants suggested that if the economy continued to make rapid progress toward the Committee’s goals, it might be appropriate at some point in upcoming meetings to begin discussing a plan for adjusting the pace of asset purchases”. In other words, the Fed has put its stake in the ground to commence tapering plans.

Markets have been watching closely for clues about when the central bank might start tapering its bond purchases, which currently are at $120 billion a month, comprised of $80 billion in Treasury securities and $40 billion in mortgage-backed securities. The Fed’s balance sheet is approaching $8 trillion, nearly double its size before the COVID-19 pandemic.

Fed officials have been steadfast that they will not change policy until their economic goals, particularly regarding employment and inflation, have been hit. Federal Reserve Chairman Jerome Powell said after this meeting that the recovery remains “uneven and far from complete” and the economy was still not showing the “substantial further progress” standard the committee has set before it will change any monetary policies. A weighing factor on the Fed, and Chairman Powell in particular, was the stunningly slow pace of hiring in April, with nonfarm payrolls rising just 266,000 against expectations for a one million plus gain amid the accelerating reopening of the American economy.

While the Fed upgraded its view on the economy, saying growth has strengthened and inflation was rising, the FOMC nevertheless voted to hold benchmark short-term borrowing rates near zero percent and current quantitative easing bond purchases at their current levels. The next FOMC meetings are scheduled for June 15th and 16th.

Applications for state unemployment insurance fell for the week ending May 15th, to a new pandemic low, resulting from the loosening of restrictions that is increasing business activity and labor demand. Initial claims in regular state unemployment insurance benefits decreased by 34,000 to 444,000 for the past week, according to the Labor Department report on Thursday. The median estimate called for a slightly higher level of 450,000 new applications.

While these levels of claims remain significantly higher than pre-pandemic levels and indicates the labor market is still far from a full recovery, a recent view of this data (that excludes the record annihilating new claims levels from April 2020 through July 2020 that peaked at over six million and remained at above one million) clearly shows the positive trend since February of this year: 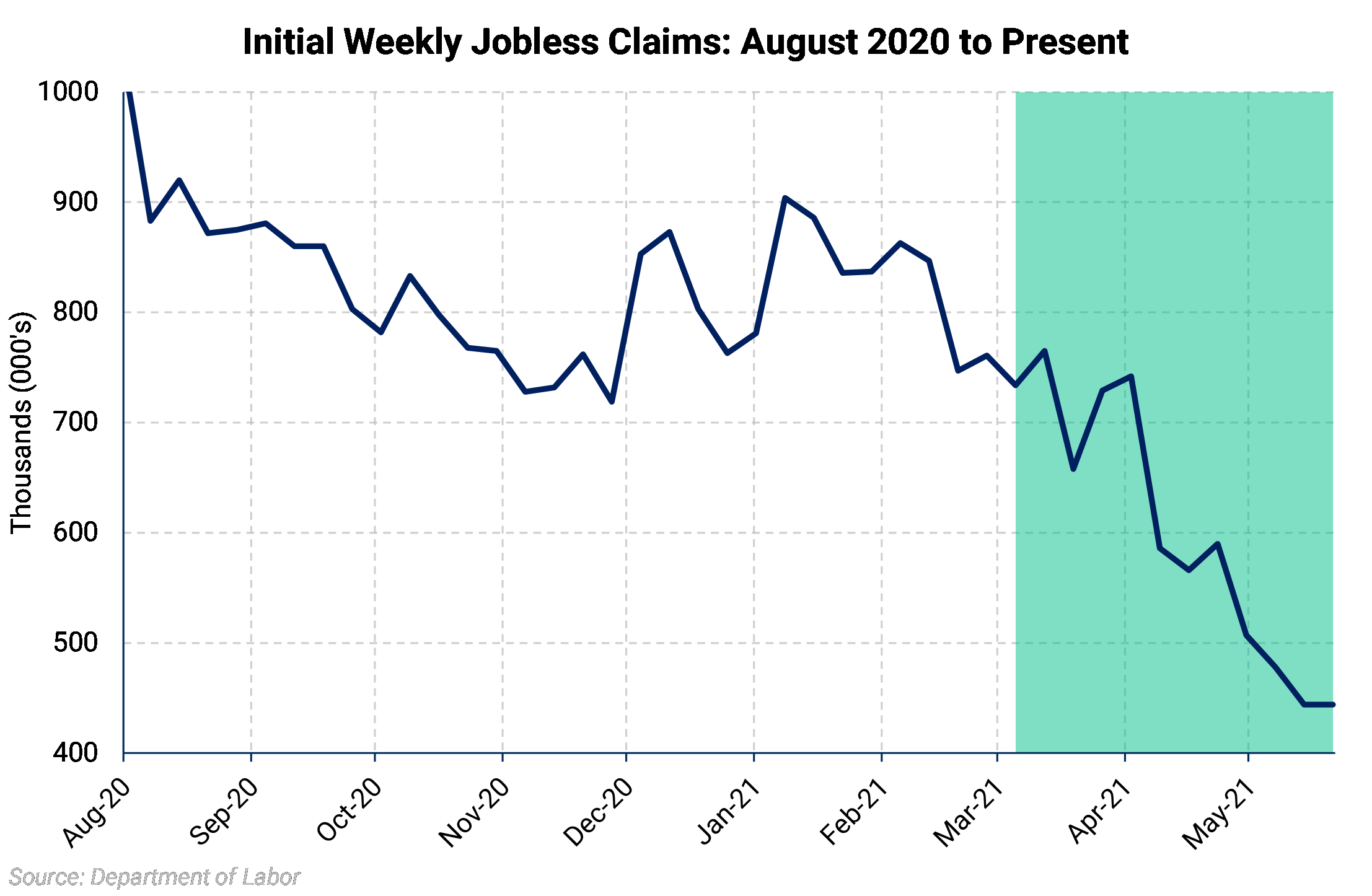 This report presented the third straight weekly drop in initial claims. More than 20 states have recently announced plans to pull out of federal unemployment benefit programs amid the debate over whether the $300 per week extra jobless pay is making it more difficult for employers to hire.

Continuing claims for ongoing state benefits unexpectedly jumped by 111,000 for the week ended May 8th, the largest weekly increase since the end of November 2020. Initial applications for Pandemic Unemployment Assistance for self-employed and gig workers decreased slightly last week.

The next major insight to the U.S. unemployment picture will be the May nonfarm payrolls and unemployment report, which will be released on Friday, June 4th. Expectations call for a payroll increase of 600,000 from its unexpectedly low and despairing level of 266,000 in April and a drop in the unemployment rate from 6.1% to 5.9%.