The dual victories by the two Democratic candidates, Reverend Raphael Warnock and Jon Ossoff, in the Georgian senatorial runoff elections were one of several historical events that effected America and financial markets in what will go down as an infamous week in U.S. history. The new Democrat controlled presidency, House, and now Senate, will result in a much more liberal array of policies, including significant fiscal stimulus and other additional spending.

This can set off a highly inter-related series of economic events — deficit Treasury funding; increased monetary growth to allow the Federal Reserve to continue, or if needed, increase their Treasury and mortgage-backed securities purchase programs; interest rates pushed higher both by the need to attract buyers of new Treasury debt as well as the fixed income market's expectations for reflation; and quite possibly, actual increases in inflation. 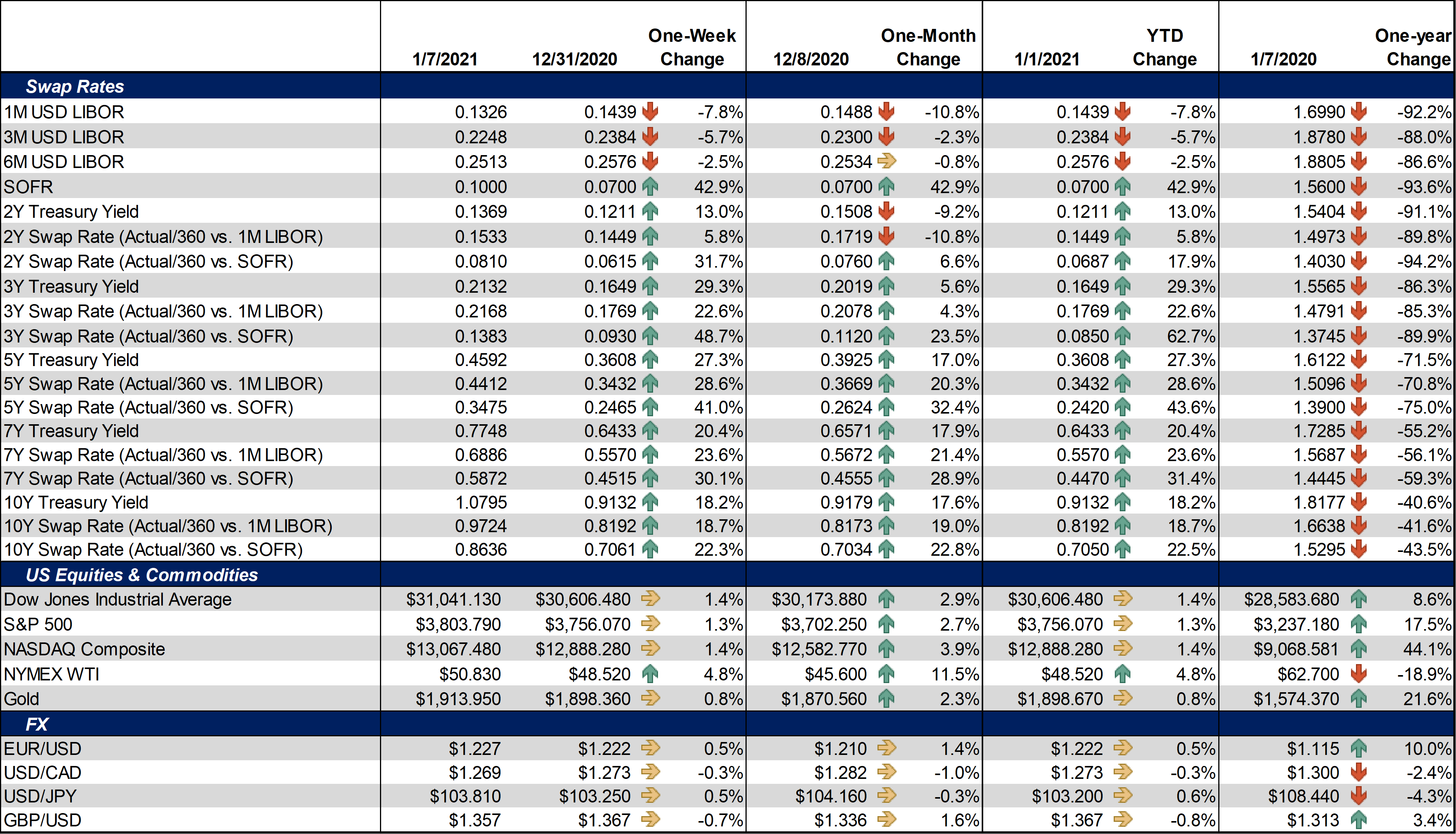 This week's circumstances pushed the bellwether 10-year Treasury yield past its recent resistance level of 0.98% to over 1.00% following the news of Tuesday night's election outcomes, setting a new floor at this big figure. This move suggests a further break higher, targeting the 1.15% to 1.20% range for this yield in the more immediate future. 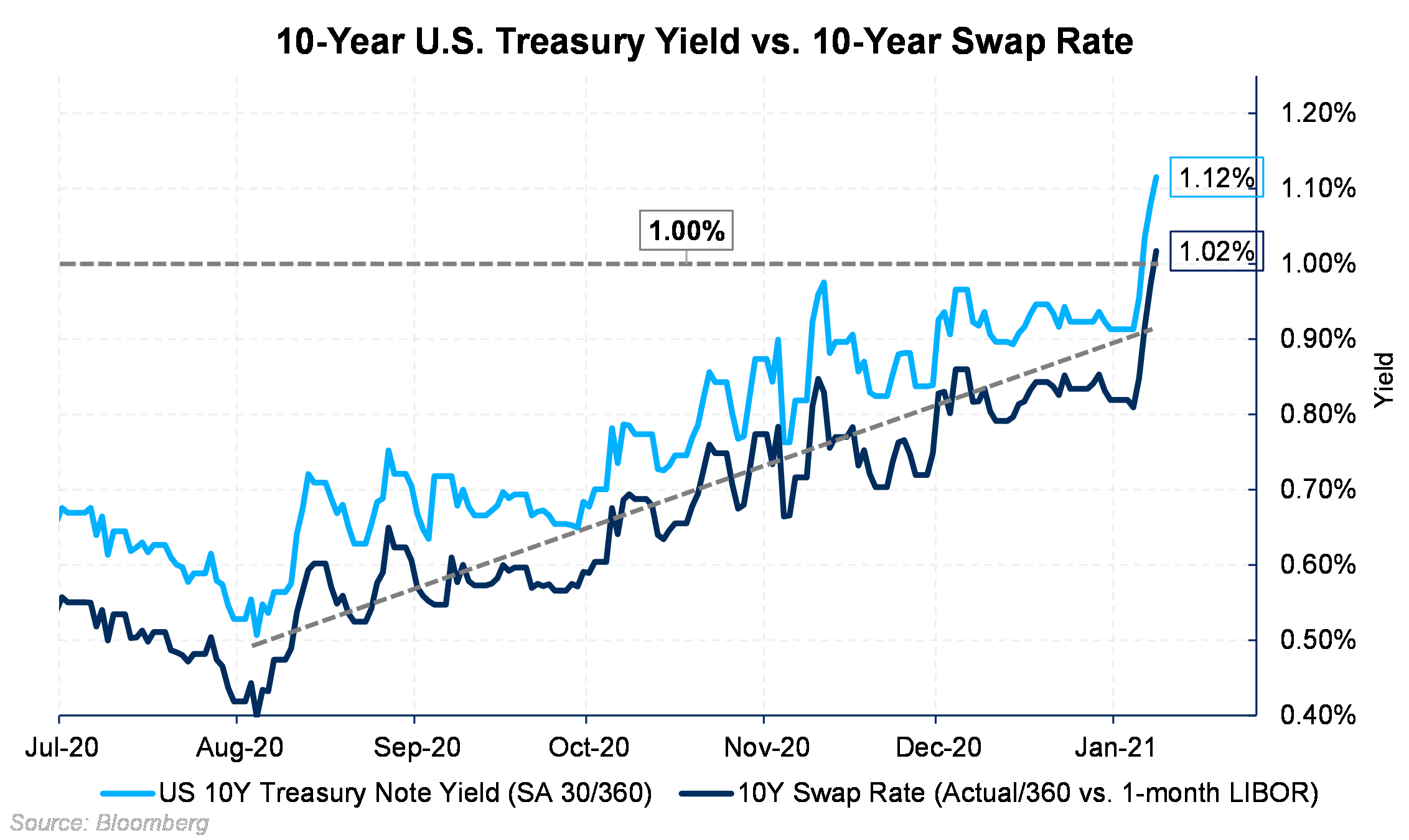 Without a Republican controlled Senate that would have the ability to put the brakes on the many likely forthcoming liberal policies, generous COVID relief to individuals, businesses, and state and local governments will most certainly be proposed soon out of the gate after Joe Biden's inauguration. Increased healthcare inclusion and benefits, along with significant new spending and regulation focused on climate change and portions of the Green New Deal are almost a certainty to come soon thereafter. These, and many other expected grand policies, will all require increased spending by a government that already has record levels of deficits, along with record levels of debt and outstanding money supply to finance them.

Higher interest rates and expense are a logical outcome

Even if desired, additional Fed action may not be able to completely stop medium- and longer-term rates from rising in a steepening trend if economic optimism takes hold further, despite the weight of the mounting COVID crisis's effect on employment and the overall U.S. economy.

Treasury yields are the primary driver, nearly on a 1:1 basis, of higher interest rate swap rates where a hedger can lock in short-term interest rate exposure, such as LIBOR. While LIBOR is more pegged to the Fed's federal funds target, currently in the range of 0.00% - 0.25%, the Fed can at any time (not just at FOMC meetings) change course and move this target higher if there is proactive concern over potential higher inflation due to increased deficits, increased money supply, and/or weakness in the U.S. dollar. When this domino effect occurs, LIBOR and other short-term funding rates, such as SOFR and AMERIBOR, will move higher in lockstep, increasing floating rate debt interest expense.

Analysts are now reactively revising their rate expectations much higher

While many economists at year-end 2020 forecasted a rising ten-year Treasury yield in the range of 1.25% to 1.50% by the end of 2021, that was predicated on the odds that the Georgian Senate races would produce at most one victory for the Democrats, still leaving the Republican majority's roadblock on fiscal spending. With this week's political outcomes, many of these forecasts are now up near, or at, 2.00%, which is higher than where the ten-year Treasury yield started in 2020, prior to the pandemic. If these targets are met, the cost of hedging floating rate debt across all maturities will rise along with their counterpart Treasury yields. As displayed below, the five-year swap rate (on a monthly, Actual/360 basis, like that of the one-month LIBOR basis) has risen 0.30% since its low in August 202 and over 0.12% alone since Monday's close: 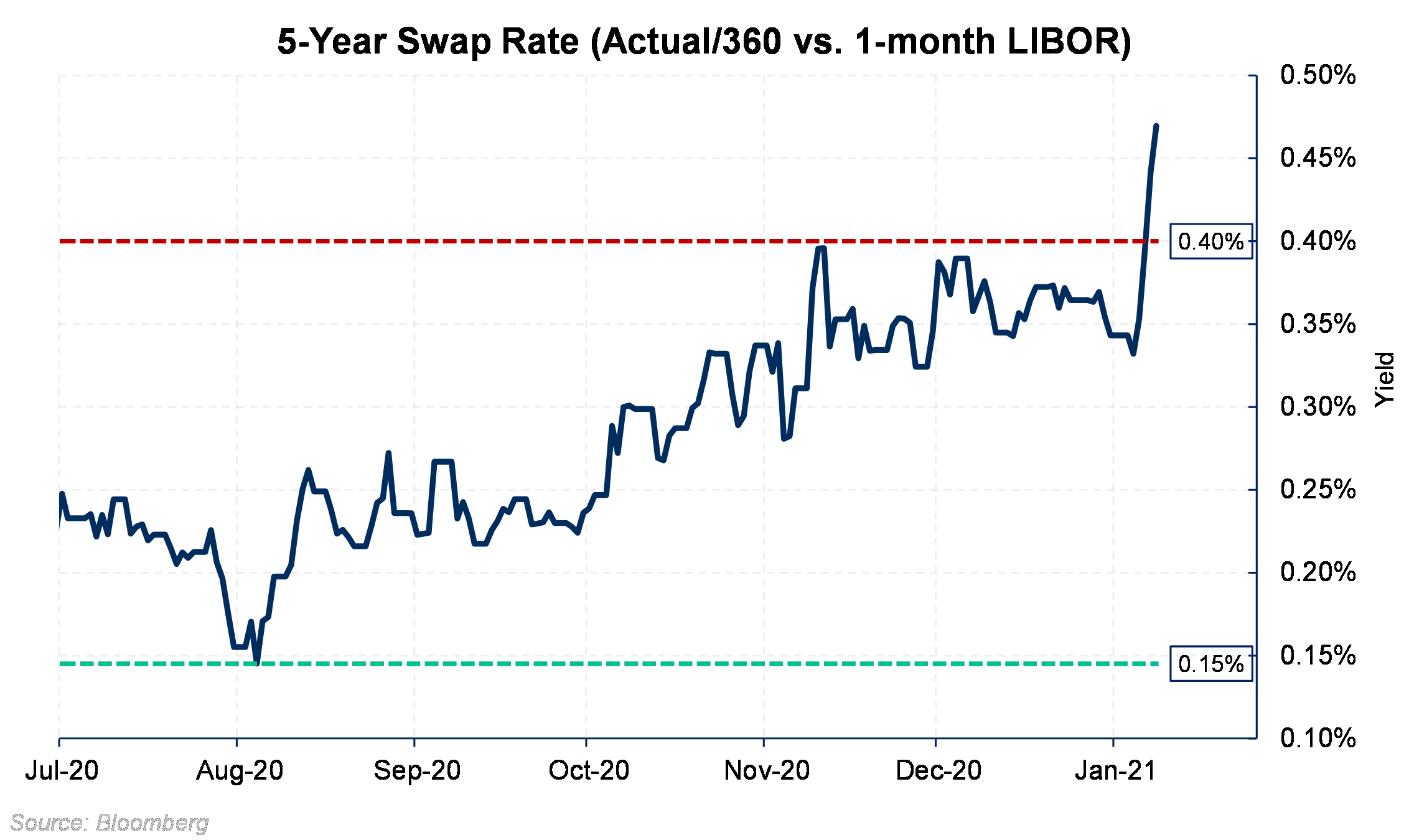 Further economic rebound in sight, but we have to get there first

Markets always look at the long run and do not necessarily fixate on current conditions. This explains the motivation for record equity growth seen during the worst global health crisis in over a century, and the recent increase in interest rates due to the forecasted expansion in fiscal spending.

Newly developed COVID vaccinations are viewed as being the savior to the current historic health and resulting economic crises. However, problems with production, distribution, and delivery of the vaccinations are delaying this foreseen rebound. Original forecasts predicted that 20 million Americans would receive the first round of the two-part COVID vaccinations by the end of 2020. One week into 2021, the country has only managed to vaccinate a little over six million people as of Thursday, according to the Centers for Disease Control and Prevention.

This all the while the COVID pandemic rages further almost every day. With the surreal events of this past week, from the public release of the Trump audio tapes with Georgian officials over the state's presidential election, Tuesday's outcome of the Georgian senatorial elections placing government policy control into the hands of Democrats, and Wednesday's first ever storming of the U.S. Capitol building by American citizens, COVID news has taken a back seat to the top news of the day. However, in this daily increasing calamity, the U.S. has reached a new milestone of over 4,000 coronavirus related deaths a day, reaching a total death count of over 365,000.

Equities, and now bonds, are foreseeing a significant economic rebound commencing in the second half of 2021 once it is anticipated the worst of the pandemic crisis will be approaching an end, along with increased fiscal support and continued liquidity provided by the Federal Reserve. But the country must greatly improve the rate of vaccinations and survive over the next several months, politically and economically, before we can get there. Every day that the health crisis continues, the human toll and economic damage from which the nation must rebound gets more severe, making its eventual needs and timing more uncertain.

The deteriorating state of U.S. employment is clearly following the worsening state of the COVID crisis. As the pandemic continues to grow at alarming rates, many businesses remain limited or closed (many permanently), and further local municipalities feel forced to continue or expand restrictions and shutdowns.

These extremely unfortunate circumstances are being reflected in the numerous weekly and monthly employment related reports. Friday's nonfarm payroll report had a median forecast for a slight, but positive, increase of 50,000 jobs. However, the Labor Bureau reported Friday a loss of 140,000 nonfarm jobs for the month of December 2020, the first negative print in eight months.

This net loss in jobs is anticipated to continue at least into the first few months of 2021 as the country continues to struggle with the effects of the coronavirus. This, and the next few reports if they are as weak as anticipated to be, will add to the impetus for the newly all Democratic government to take larger and swifter fiscal action, ironically helping to support the equities market and the rise in interest rates further.

Job losses were in the obvious sectors — leisure, hospitality, personal services, and government. Interestingly, despite the large drop in health-conscious consumer shopping at brick-and-mortar retail stores over the holiday season, there was decent growth in retail. In other positive sign that forebodes hope for future economic expansion, job growth continued in the construction, manufacturing, and wholesaling sectors:

December's unemployment rate remained at 6.7% from November's level, just slightly beneath the forecast of 6.8%, but do not be deceived. The number of American who reportedly have thrown in the towel and dropped out of the work force, and thus are not included in the denominator of the unemployment rate, has grown to over 13.7 million. This is the real take away from the unemployment rate - not its nominal level.

Dropping out of the work force helps to increase permanent unemployment, an extremely difficult dilemma to reverse. Count on the new Democrat establishment, the Treasury under a dovish Janet Yellen, and the Federal Reserve to take all actions deemed necessary to combat this challenge.