Haynesville Production Is Growing. What Happens to Basis Prices?

Henry Hub Natural gas prices have surged this year, roughly doubling, climbing over $2.50 to $5/MMBtu since the beginning of 2021. Higher gas prices have made shale plays like the Haynesville attractive for gas producer growth. Moreover, the play resides just over 200 miles away from the benchmark Henry Hub, making persistent basis discounts more easily overcome. The added M&A focus on the play, and higher gas prices, will cause production to grow, but what effect will this have on Haynesville-linked basis prices, if any?

First, let's look at a few basis prices that producers in the Haynesville receive. The two most typically referenced basis prices located on the west side of the shale play are NGPL-TexOk, which has a liquid forward market, and the daily-only price at Carthage, TX. The central and eastern part of the play have other price points. The chart below shows Haynesville-connected basis points that many of our clients receive. Since 2018, NGPL-TexOk has averaged -$0.18/MMBtu to the Hub, with more recent prices closer to (minus) -$0.20 and forward pricing for the next few years averaging (minus) -$0.14. 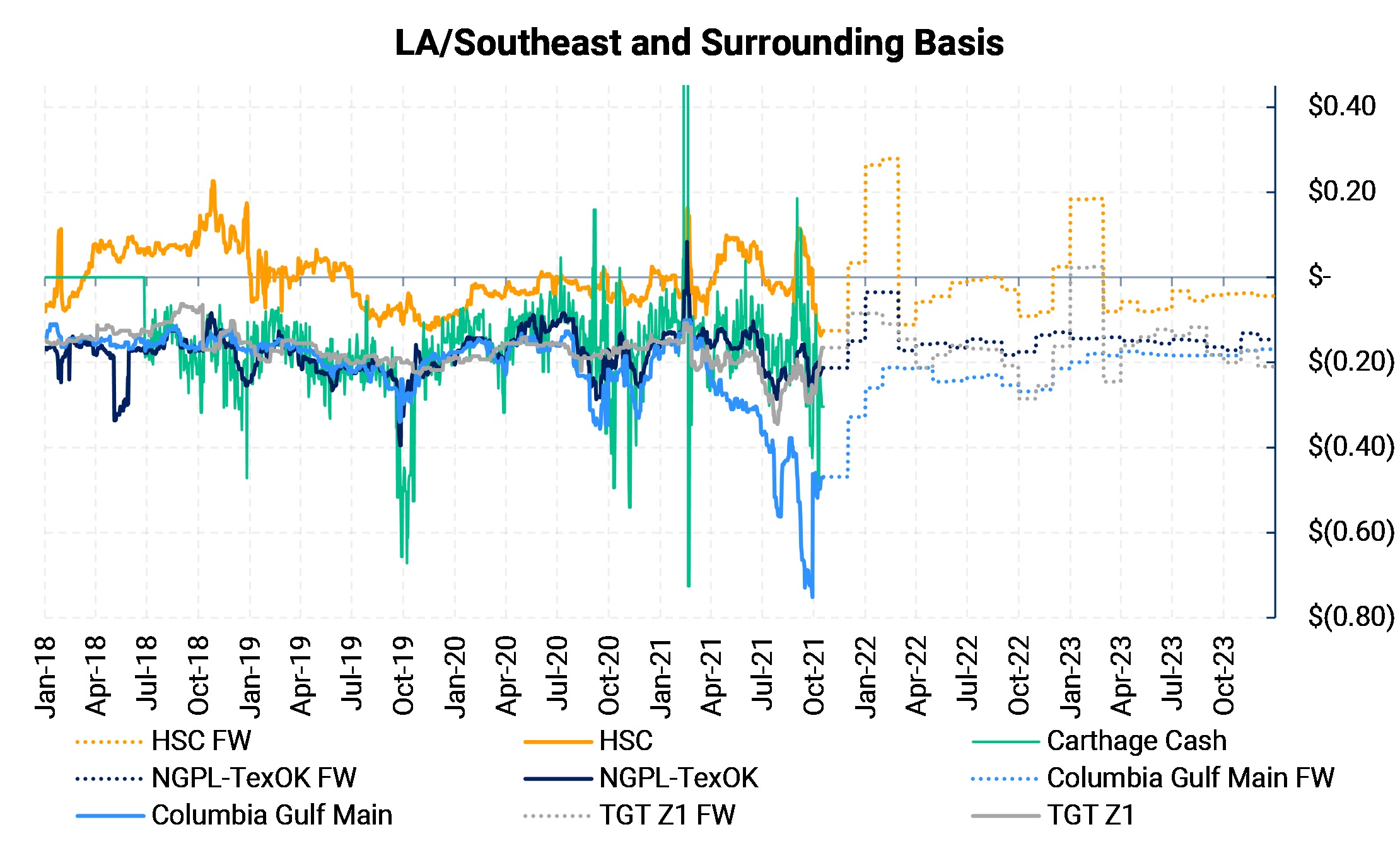 Some Haynesville producers will also receive a gas price linked to Columbia Gulf Mainline (CGM), which is more of a Perryville-area price in eastern Louisiana. CGM has experienced much more volatility than other Haynesville-linked basis prices. The prompt-month contract for CGM has deteriorated from about (minus) -$0.20 in March to about (minus) -$0.45 as of late October.

CGM is assessed from trades done in and out of the Columbia Gulf pipeline in the northern Louisiana area. Most of the volume flowing to the CGM price point is sourced in Appalachia, and the pipeline has flowed near capacity since early this year. Volumes flowing north to south on Columbia Gulf have been steadily increasing over the years as new expansions have opened up, and Appalachian production has continued to grow. High pipeline utilization, fed by new production, has led to the recent CGM basis blowout. The price slippage isn’t exclusive to just the prompt month. In the chart below, the Winter 2021-2022 strip and Summer 2022 have widened by 12c and 7c, respectively, since early April.

The CGM forward curve, as shown in the first chart, improves materially from current levels. It would be fair to assume that traders are pricing in more “normalcy” for this basis point in an efficient market. Forward curves are often mispriced with respect to fundamentals;  therefore, we need to look at where the risk lies for CGM. Does CGM have more likelihood of realizing lower than the curve, or higher? 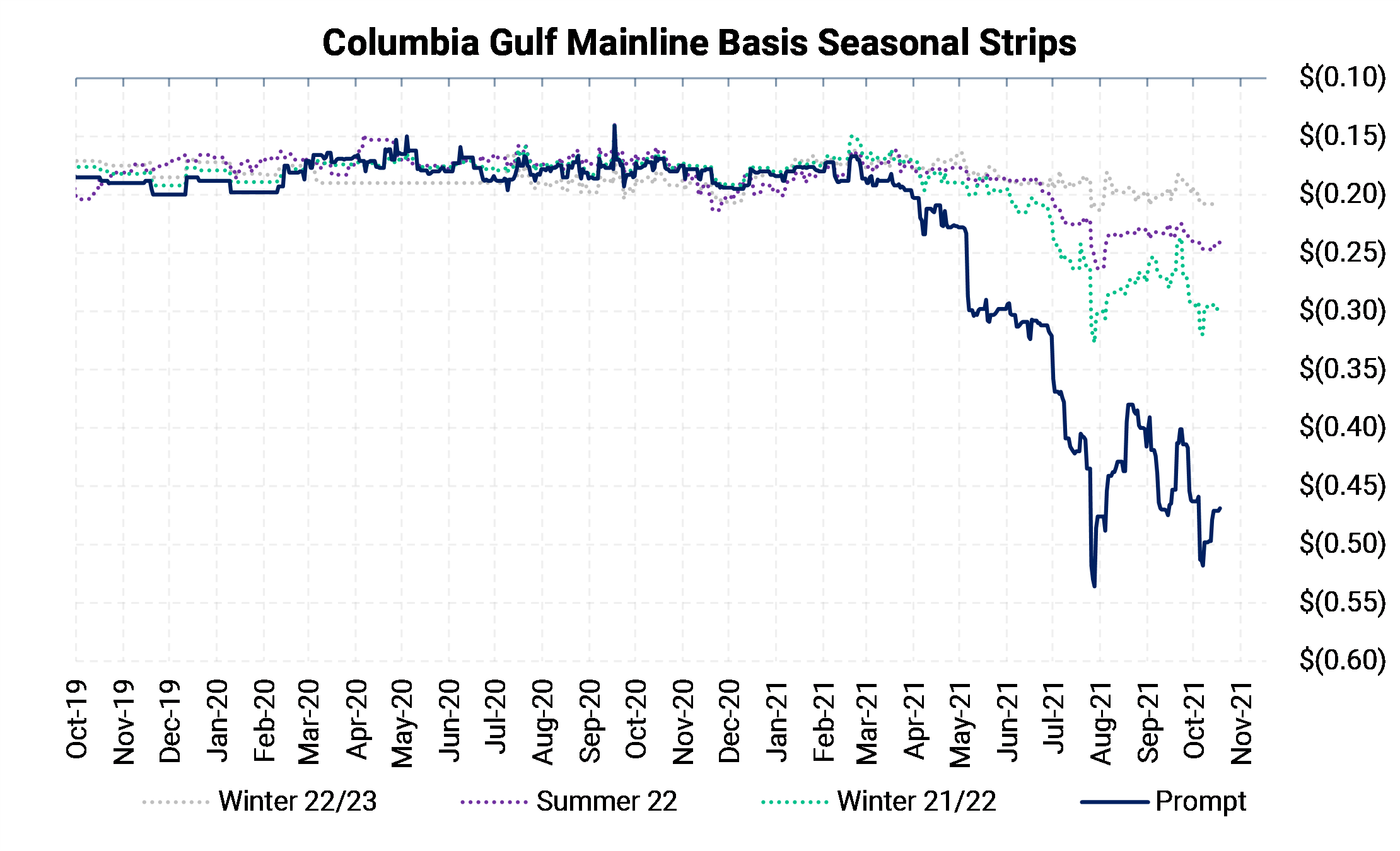 Let’s consider any infrastructure projects that would change throughputs, and Haynesville-area production growth.

Sufficient takeaway capacity becomes essential when production is set to increase, and the area is already feeling basis price pressure.

Currently, Columbia Gulf is flowing at or near max capacity near the Perryville area, where Haynesville producers send their gas east to eventually reach the Gulf Coast and other markets. Due to CGM pricing, the eastern route has recently become the most undesirable route for producers, but higher net-back routes to the west and south are already flowing near capacity.

Current pricing is consistent with a basis market that needs more egress capacity. Without new pipe, production growth will be difficult without further pricing discounts.

Over the next two years there are three projects either near completion or in the construction phase:

Expansion of the Acadian system. This will add an incremental 300 MMcf/d of takeaway from the Haynesville. This project is due online this quarter.

Columbia Gulf expansion. TC Energy is adding capacity on Columbia Gulf from north of Perryville down to Rayne, LA. Compressor additions will allow about 400 MMcf/d more gas to flow on Columbia Gulf, with the ultimate buyer of that gas being Cheniere’s new Sabine Pass Train 6.

Estimates for Haynesville production vary from analyst to analyst. Most expect the area will see material growth over the next few years, with a renewed focus for M&A and higher gas prices.

Our model below shows a potential scenario where the greater Haynesville area will grow by about 1 Bcf/d each of the next two years. Our assumptions use a production tool from Enverus and a purely economic model, based on the recent gas curve, to compute the production path. These assumptions are devoid of management decisions. In this model, an economic well with an IRR over 20% would be drilled, while inferior wells would not. 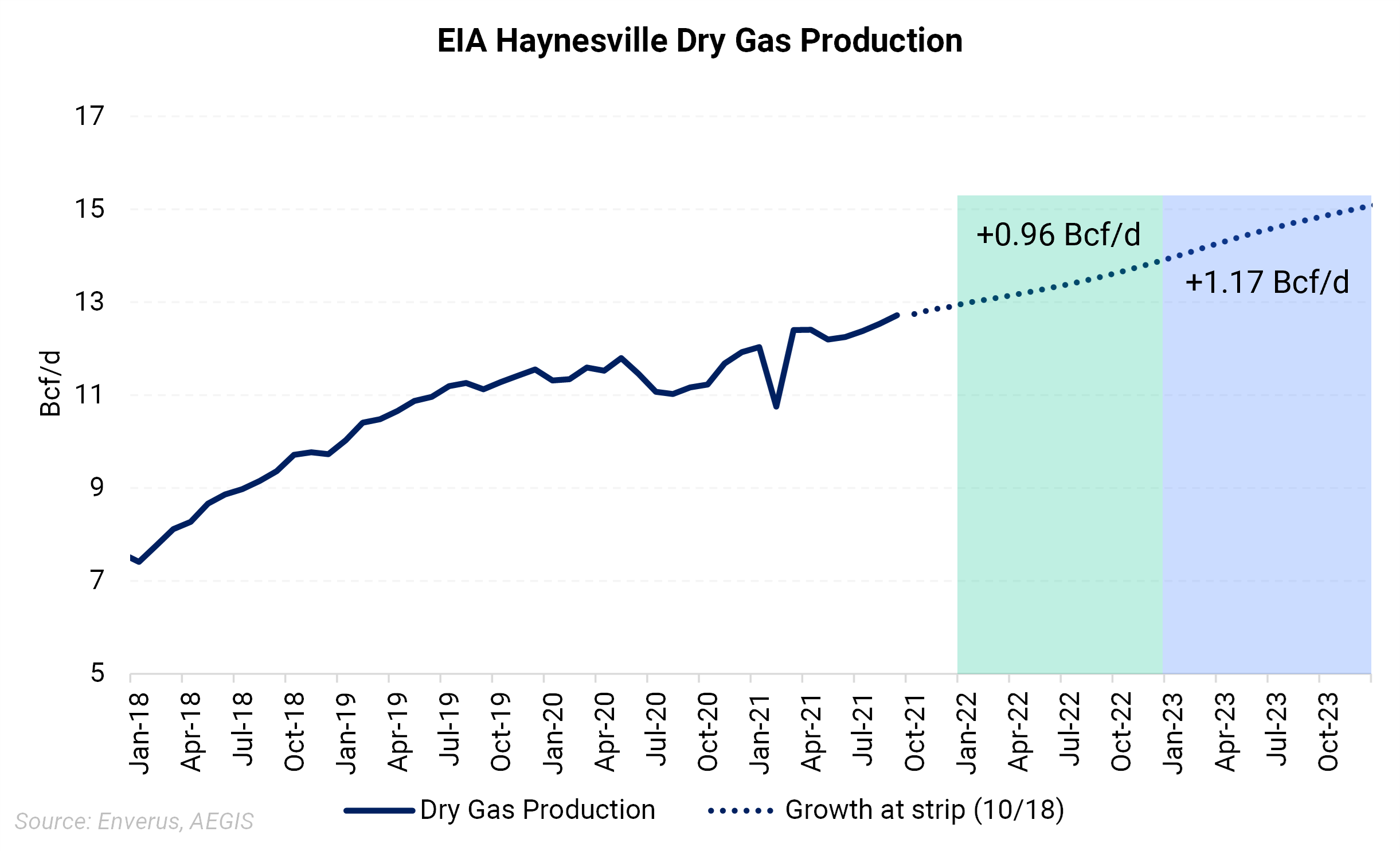 With more production likely on the way, new pipeline is necessary to avoid further price (basis) discounts to Henry Hub.

Takeaway: Columbia Gulf Mainline likely has more downside risk than upside over the next twelve months or so. Production is rising at a strong clip, and only minor pipe expansions are slated to come online before the end of 2022. The CGM forward curve, in our opinion, has a greater chance to realize lower than what is currently hedgeable.