Inflation Numbers Remain Robust, While Congress Gets Closer to Spending Up to $5 Trillion

CPI in line with forecasts

U.S. stocks rose to fresh all-time highs, the U.S. dollar weakened, and Treasury yields held firm after data Wednesday showed consumer prices, as measured by the Consumer Price Index (“CPI”), increased at a more moderate pace in July, reducing concern about the timing of an unwinding of some of the stimulus that has helped the economy recover from the COVID pandemic.  The S&P 500 and Dow Jones Industrial Average indexes climbed to records after data showed that the CPI rose 0.5% in July after climbing 0.9% in June. The tech-heavy Nasdaq 100 declined as investors rotated to cyclical shares from traditional growth favorites.

While the CPI figures were in line with estimates, it could take several more months of data to settle the debate over whether inflation proves transitory or not. Year-over-year, the CPI rose 5.4%, compared with estimates of 5.3%.

The supply constraints plaguing the U.S. recovery show few signs of dissipating any time soon, weighing on growth and stoking inflation.  Forecasters have now lowered economic growth projections for this year and lifted inflation expectations into 2022 across a variety of metrics, according to Bloomberg’s latest monthly survey of economists: 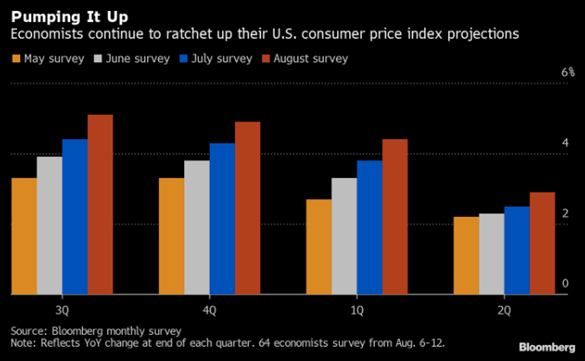 After numerous monthly inflation surprises, “transitory” is being highly questioned by the market. The longer global supply constraints continue to pressure prices, the greater chance inflation expectations will remain elevated. As recently reported, there have been new supply disruptions at Chinese ports due to health concerns, so the global bottleneck story is likely to linger into the latter half of this year.

Prices paid to U.S. producers, as measured by Thursday’s Producer Price Index {“PPI”) release, rose in July by more than expected, suggesting that higher commodity costs and supply bottlenecks are still adding to inflationary pressures for inputs.  The PPI for final demand increased 1% from the prior month and 7.8% from a year earlier, its highest YoY gain since the reporting of the PPI.  Producer prices have been accelerating for much of this year against a backdrop of robust demand, supply chain constraints, and shortages of materials. The increases in input costs, combined with recent upward pressure on wages, help explain higher consumer inflation discussed above.

Almost three-fourths of the jump in the July PPI reflected a record 1.1% pickup in services. The advance in final demand services was broad and included strength in margins at wholesalers and retailers.

U.S. interest rates have moved higher partly due to the inflationary impact of the unprecedented supply-side shock to the global economy. While the stance that inflation is transitory remains, it could be sufficiently undermined and serve as an impetus for rates to move higher. 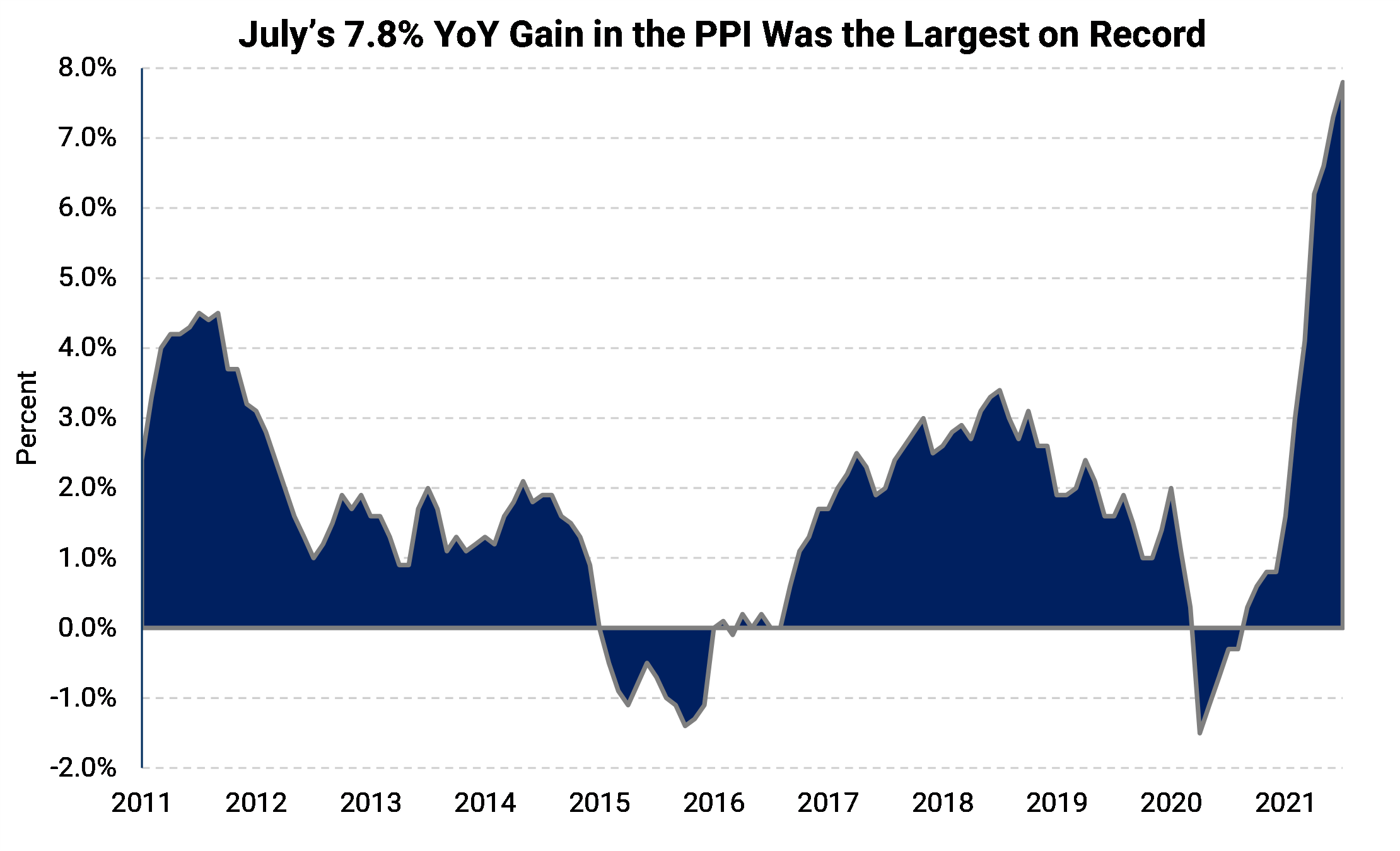 Statements Monday from the Atlanta Federal Reserve Bank’s President Raphael Bostic, the Richmond Fed President Tom Barkin, and the Boston Fed President Eric Rosengren suggests further that tapering of the Federal Reserve’s monthly, systematic asset purchases are nearing an unwind, along with a rise in interest rates. With inflation reaching the 2% target, which is a Fed precondition for a rate hike, Bostic and Rosengren envisage tapering to begin in the fourth quarter of this year, or possibly earlier if job market growth continues at the current pace.

Chiming in as well, the San Francisco Fed President Mary Daly said she sees the taper beginning at the end of this year or early in 2022, the Dallas Fed president Robert Kaplan suggested an earlier start in October, while the Kansas City Fed president Esther George noted "a transition from extraordinary monetary policy accommodation to more neutral settings must follow."

The transitory hold on interest rates

Despite these recent inflation results, the bellwether ten-year Treasury rate is holding in at around 1.30%, off from its recent intraday high of roughly 1.80% back at the end of March: 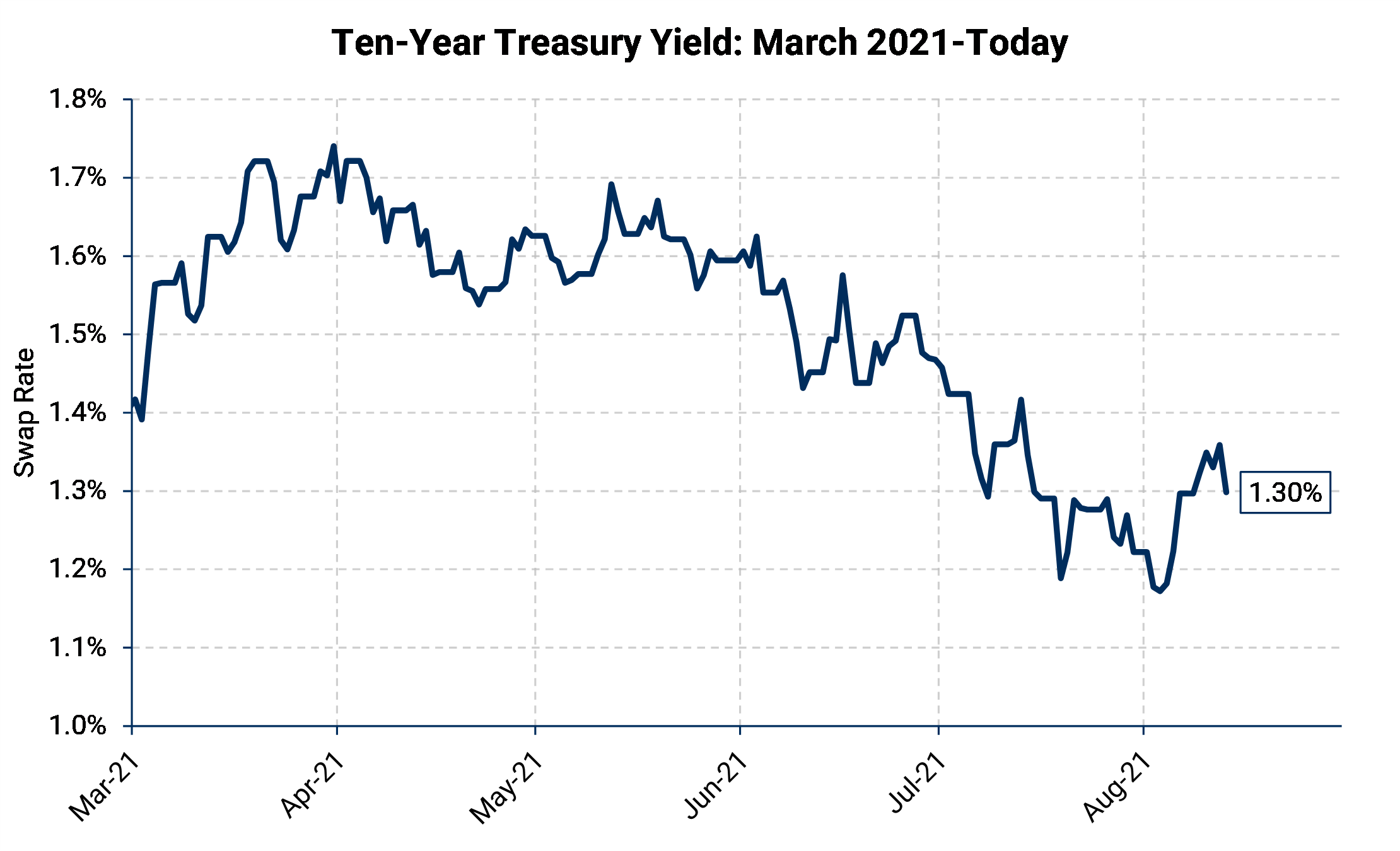 Contributing to the strength in Treasury bond prices, for now, include: the Federal Reserve’s quantitative easing policy via its monthly Treasury and mortgage-backed securities asset purchases; an outstanding $16.6 trillion (in USD equivalents) in alternative negative-yielding global sovereign debt; the federal budget deficit poising to decline, limiting new Treasury supply needs; and, from a market trading perspective, many fixed income traders have been caught short, forcing them to buy Treasury securities to cover their costly positions.

As the Fed begins to taper, this should put upward pressure on yields, especially with the recent additional fiscal spending to the tune of $4-5 trillion.

The Senate floor has been very, very busy this week. The Senate voted to advance a massive $1.2 trillion bipartisan infrastructure package following months of intense negotiations. The final vote of 69-30 represented a wide bipartisan berth, but the bill will likely encounter new challenges as it goes to the House. Then, Senate Democrats approved their $3.5 trillion budget resolution, which they hope will pave the way for a huge economic package without the threat of legislative obstacles from Republicans who oppose it. The measure passed after a lengthy series of amendment votes known as a "vote-a rama."

Next, the infrastructure bill goes to the House of Representatives for approval. Only after both chambers pass it will Democrats be able to use a process known as budget reconciliation to pass their additional legislation on a party-line 51-50 vote, with the help of Vice President Kamala Harris acting as the tie breaking vote, if needed. The sperate spending package by the Democrats will address expenditures for health care, aid for families, the climate crisis, and much more.

Nine moderate House Democrats have signed a letter to Speaker of the House Nancy Pelosi threatening to withhold support from the $3.5 trillion budget blueprint until a bipartisan infrastructure package is signed into law.  The moderates’ stance risks unraveling Speaker Pelosi’s plans to bring the budget resolution to a vote in the House the week of August 23rd. Pelosi’s slim margin of control means she can only afford to lose three members of her caucus in a vote on the budget, which passed the Senate on a party-line vote this week and isn’t expected to garner any Republican support in the House.

Surprisingly, the Congressional Budget Office’s cost estimate suggested that the infrastructure legislation will not impact near-term Treasury issuance. The U.S. Treasury has said it is reviewing the possibility of cutting its borrowing in the future, and that it could make an announcement on this issue as soon as November.