The ten-year Treasury yield peaked at nearly 1.90% this week as the fixed income market is speculating not only higher interest rates in the very near term, but also the potential for larger and quicker rate increases in order to combat inflation that is continuing to worsen in most cases. This demonstrates that traders are anticipating a Federal Reserve that is set on taming inflation as its main priority today at the expense of economic growth tomorrow.

The interest rate forward curve now has almost four Federal Reserve rate hikes of 0.25% apiece priced in for 2022. While there is a strong market consensus that this tightening will commence in March as soon as the Federal Reserve’s asset purchases fully wind down, there also is growing market consensus that the Fed’s first move may not be one hike of 0.25% in the federal funds rate, but a larger single hike of 0.50%.

Treasury yields are up to levels not seen since before the global coronavirus pandemic roiled markets, as displayed in the ten-year Treasury yield this week: 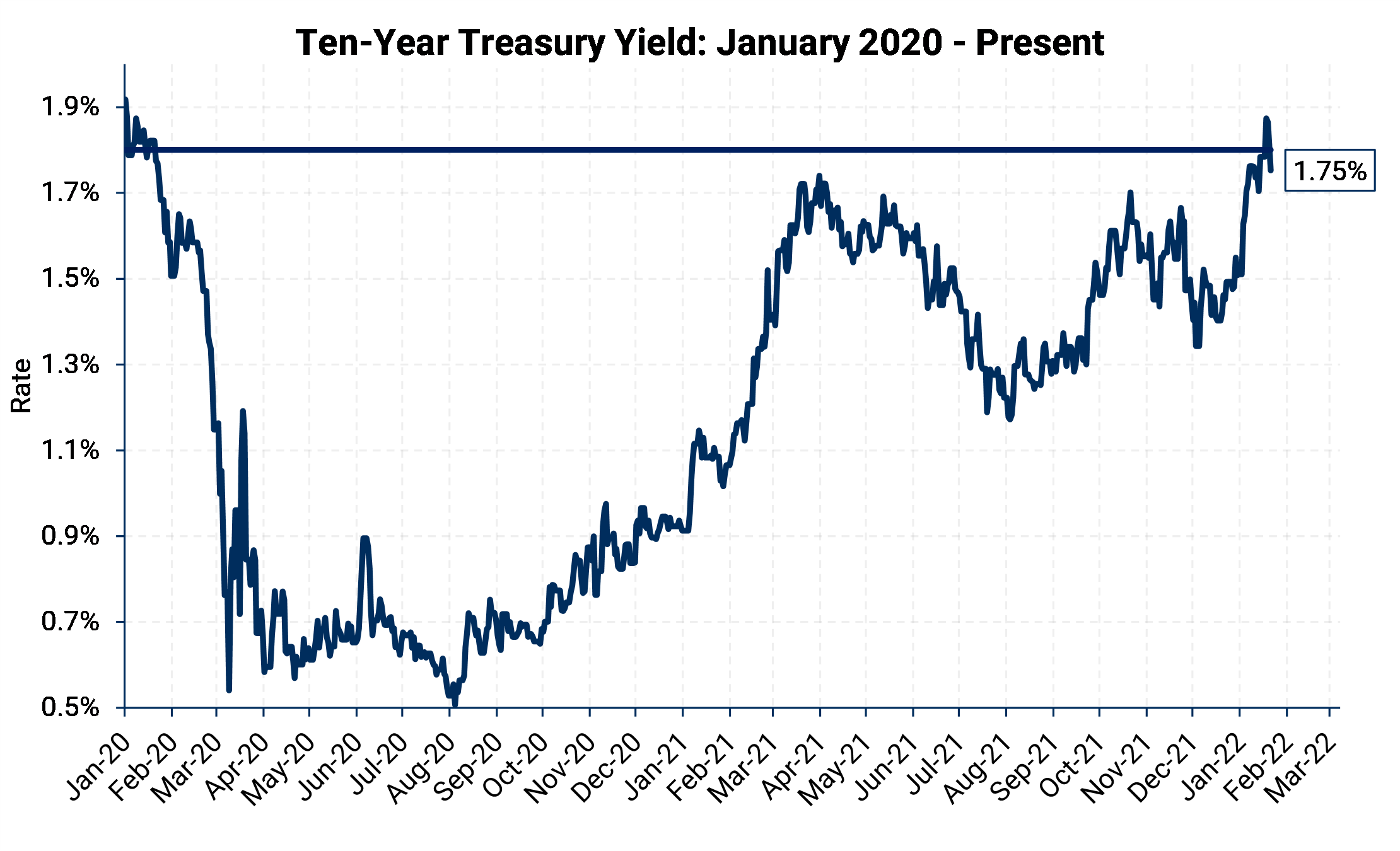 Moves in U.S. Treasury yields have seeped into other countries, with benchmark German yields rising to turn positive for the first time since May 2019. The Bank of England may move to raise short-term rates again next month as Britain’s inflation rate surged unexpectedly to the highest since 1992. In stark contrast to Western economies, in China, where policy is diverging from the U.S., the central bank has pledged to use more monetary policy tools to aid the economy and ease credit stress amid a real-estate slump.

Earlier in the week, rising rates put a choke on the equities markets. But equities and Treasuries reversed a selloff on Wednesday as investors turned their attention to corporate earnings. Earnings optimism offset speculation that the Federal Reserve may deliver more than a quarter-percentage point March interest rate hike to fight inflation. The S&P 500 rebounded from a two-day slide, and the Nasdaq 100 outperformed, bouncing back from a three-month low, led by gains in mega-cap tech and social media stocks. 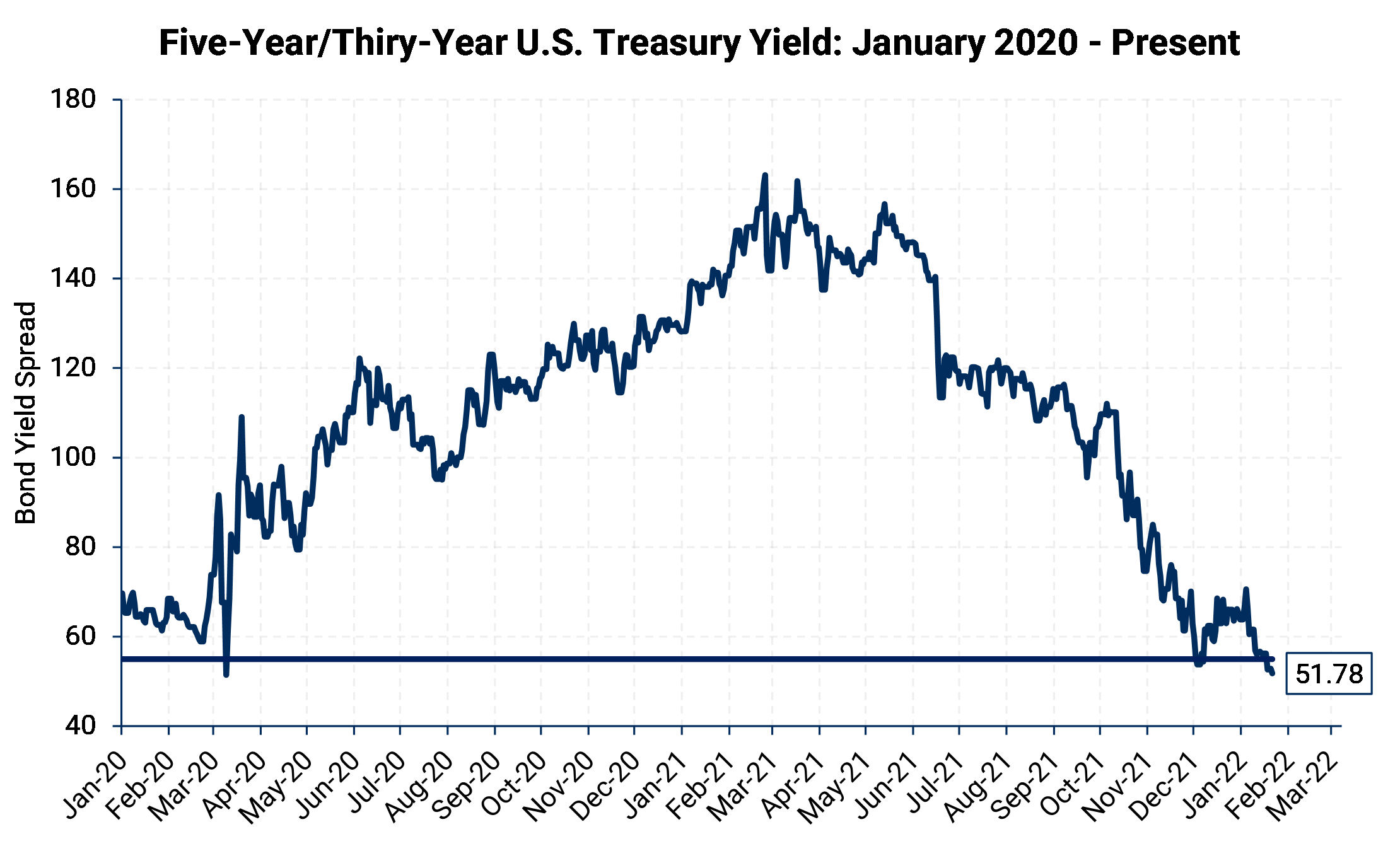 What this indicates is the market’s perception that the significant monetary policy tightening that it is anticipated to begin in March (the Fed’s halt to asset purchases, balance sheet unwinding, and pending rate hikes) will lead to slower growth later, perhaps at the expense of an eventual economic slowdown beginning sometime in 2023-2024, perhaps leading to an eventual recession.

New U.S. home construction unexpectedly strengthened in December to the fastest pace in nine months, led by apartment projects and suggesting builders found some success navigating shortages and rising prices of materials and labor. Applications to build, a proxy for future construction, jumped 9.1% to an annualized 1.87 million units in December, the highest since January of last year. Permits in 2021 surged 17.2% from the previous year. The number of one-family housing units still under construction increased to the highest level in almost 15 years, extending a steady uptrend since June 2020.

Weekly jobless claims jumped last week to a three-month high of 286,000, suggesting that the Omicron variant is having an impact on the labor market. Claims figures have been choppy in the last few weeks, reflecting challenges adjusting for seasonal effects during the holiday period. The increase in claims last week was the largest in six months: 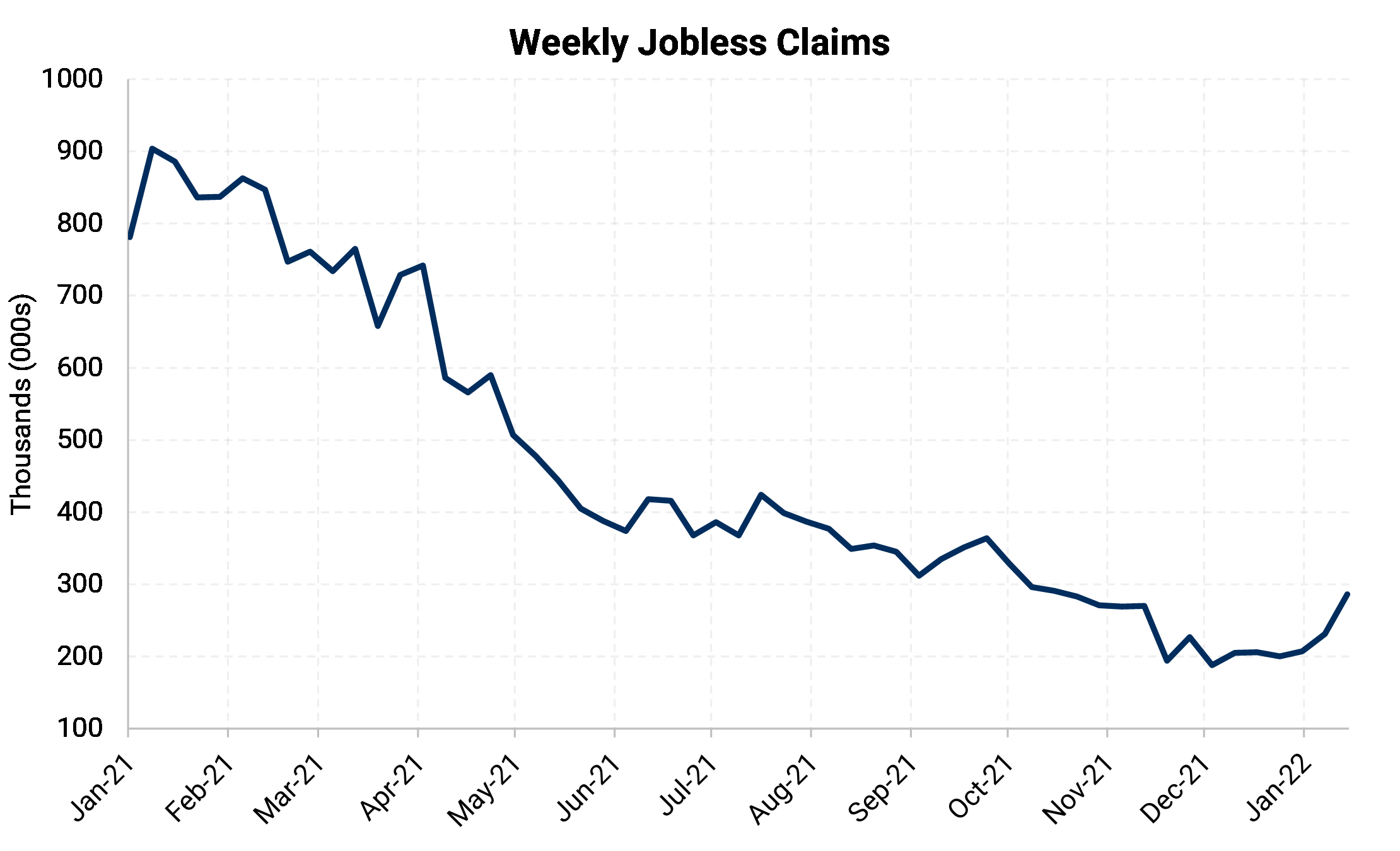 This rise in weekly unemployment insurance filings is not expected to derail the Fed from it’s tightening plans as the headline unemployment rate stands at 3.9%, just under the 4% threshold considered to be the current “full employment” level that the Federal Reserve is obligated to achieve, along with fighting inflation from its current decades-long high levels.