Inflationary Expectations Dominate Most of the Week's News

U.S. Treasury yields rose, and inflation outlooks have jumped after the U.S. Treasury Department on Thursday saw tepid demand for the sale of $27 billion of new 30-year bonds. This Treasury security sale capped off a total sale of $126 billion in coupon-bearing supply for the week. With the Treasuries markets closed Monday for the President's Day holiday, the Treasury will sell $27 billion in 20-year bonds this coming Wednesday and $9 billion in 30-year Treasury Inflation-Protected Securities (TIPS) on Thursday.

Despite a surprisingly soft report on consumer prices Wednesday, the reflation trade is gaining more traction in the fixed income markets. The bond market is sending a clear message that investors foresee additional fiscal stimulus as a sure bet and are banking on the vaccine rollout to gain momentum. There is significant growing speculation about inflation and what inflation is going to look like on the other side of the pandemic. 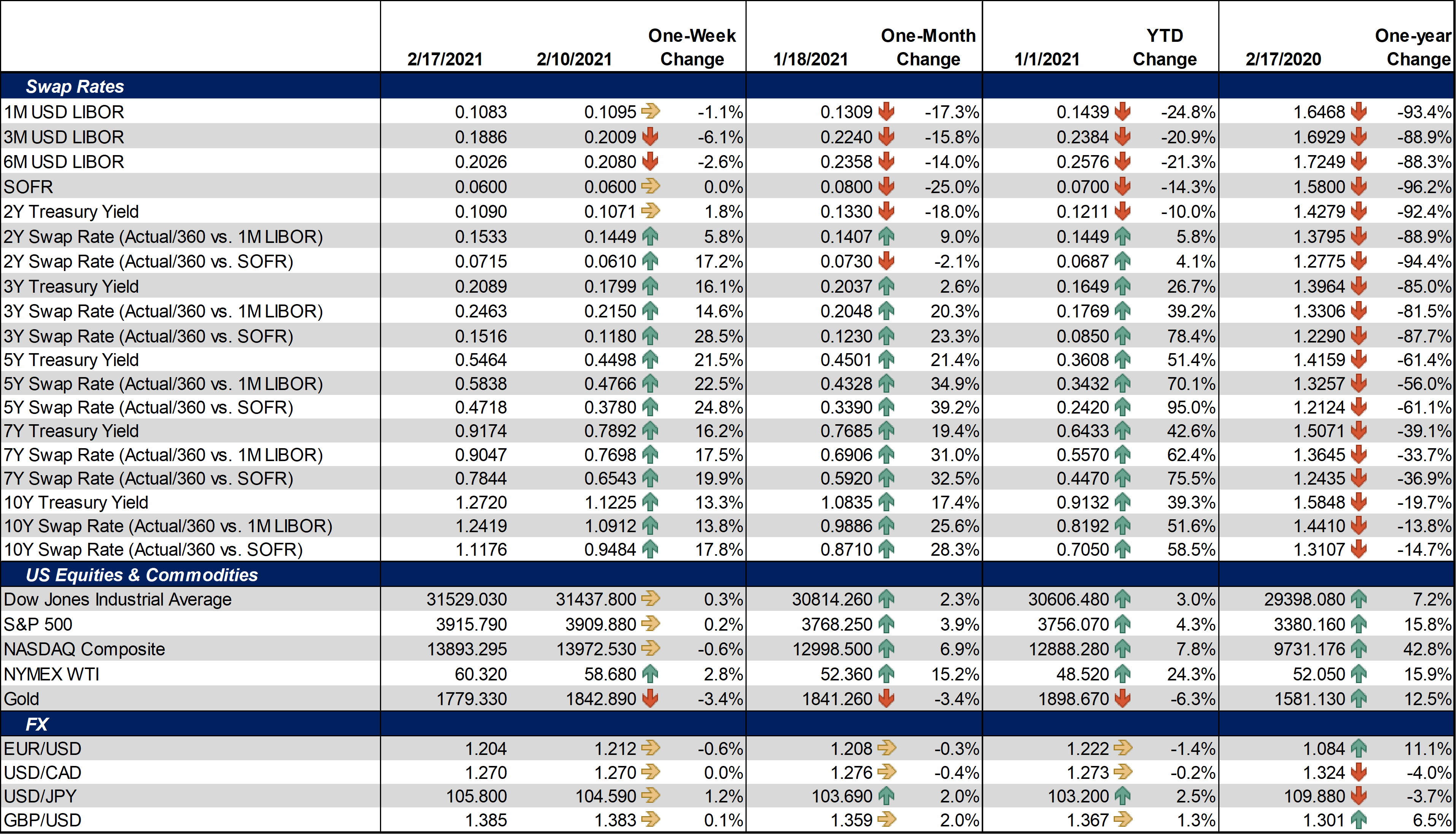 To start the trading week, Treasury Secretary Janet Yellen appeared on a slew of weekend political news shows, pushing the passage of President Joe Biden's $1.9 trillion fiscal relief package. When asked if she had any inflationary concerns with pumping so much money into the economy, as Democrat Larry Summers (former Treasury Secretary under Bill Clinton and economic advisor under Barrack Obama) has expressed, Yellen explained that "the risks to inflation are small compared to economic damage from failing to provide enough economic support" during the pandemic. In addition, she added that "we (i.e., the Federal Reserve) have the tools to deal with" inflation.

Later in the week, Yellen urged G7 finance leaders to "go big" with additional fiscal stimulus to recover from the coronavirus pandemic and told them that the Biden administration was committed to multilateral engagement and fighting climate change. The Treasury said in a statement that Yellen emphasized the need to provide more fiscal support to promote a robust and lasting recovery, telling her G7 counterparts: "the time to go big is now."

Yellen also told the meeting that G7 countries should work with international financial institutions, such as the International Monetary Fund and World Bank, to address challenges facing low-income countries that are struggling to respond to the pandemic.

Inflation expectations have ramped up as Democrats continue to work on a new fiscal spending bill, with or without Republican support. The current expected base case calls for an in initial minimum package of $1 trillion, with market expectations proving to suggest a much larger number. The combination of significant additional fiscal support and the reopening of the economy hitting around the same time later this spring or early this summer is lifting market expectations for growth and inflation.

Biden met with a bipartisan group of mayors and governors Friday as he continues to push for approval of his total $1.9 trillion coronavirus relief plan to bolster economic growth and help millions of unemployed workers. Democrats in Congress have moved to pass the stimulus plan within two weeks without GOP support, using a parliamentary procedure known as reconciliation. The plan is the first of two major spending initiatives Biden will seek and includes provisions like direct payments to Americans, weekly jobless benefits through September, and funding for vaccines and testing. The second bill will focus on infrastructure reform, climate change, and racial equity, among other things.

Republicans have opposed the $1.9 trillion price tag of the proposal and called for lowering the income cap for receiving the full $1,400 direct payment. Many Democrats and members of the Biden administration, however, signaled that they were hesitant to lower the income cap to the Republican suggested level of $50,000. The latest figure being negotiated among the political parties is reportedly $75,000.

Off of this fiscal momentum, benchmark 10-year Treasury yields rose above 1.20% at Friday's close: 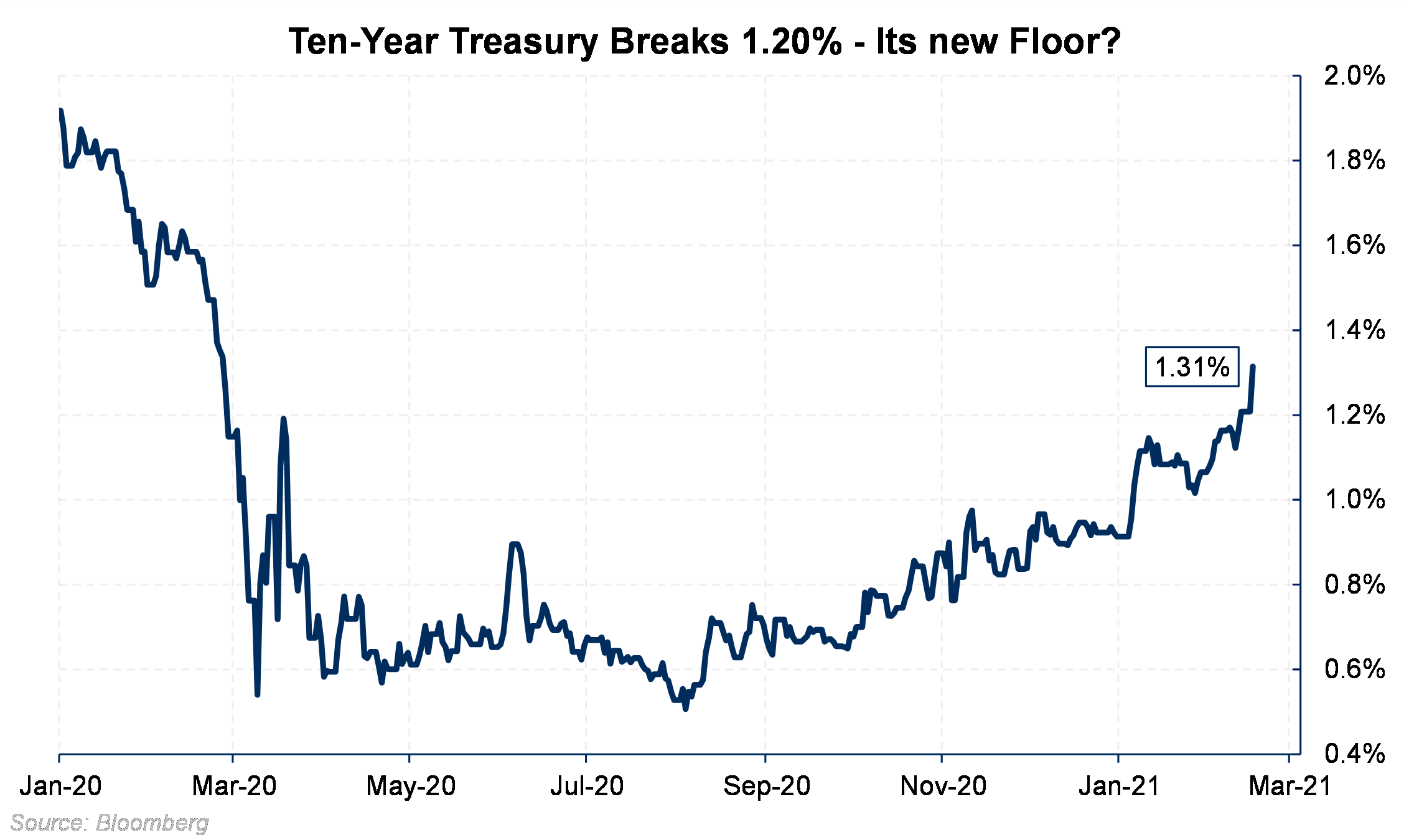 This 1.20% level may well become the new floor for the ten-year bond yield moving forward, as was suggested a few weeks back with the run up in rates after the Georgian senatorial runoff election results.

Thirty-year Treasury yields closed above 2.00% for the week, their highest level since the onset of the pandemic-driven economic crisis a year ago in February 2020: 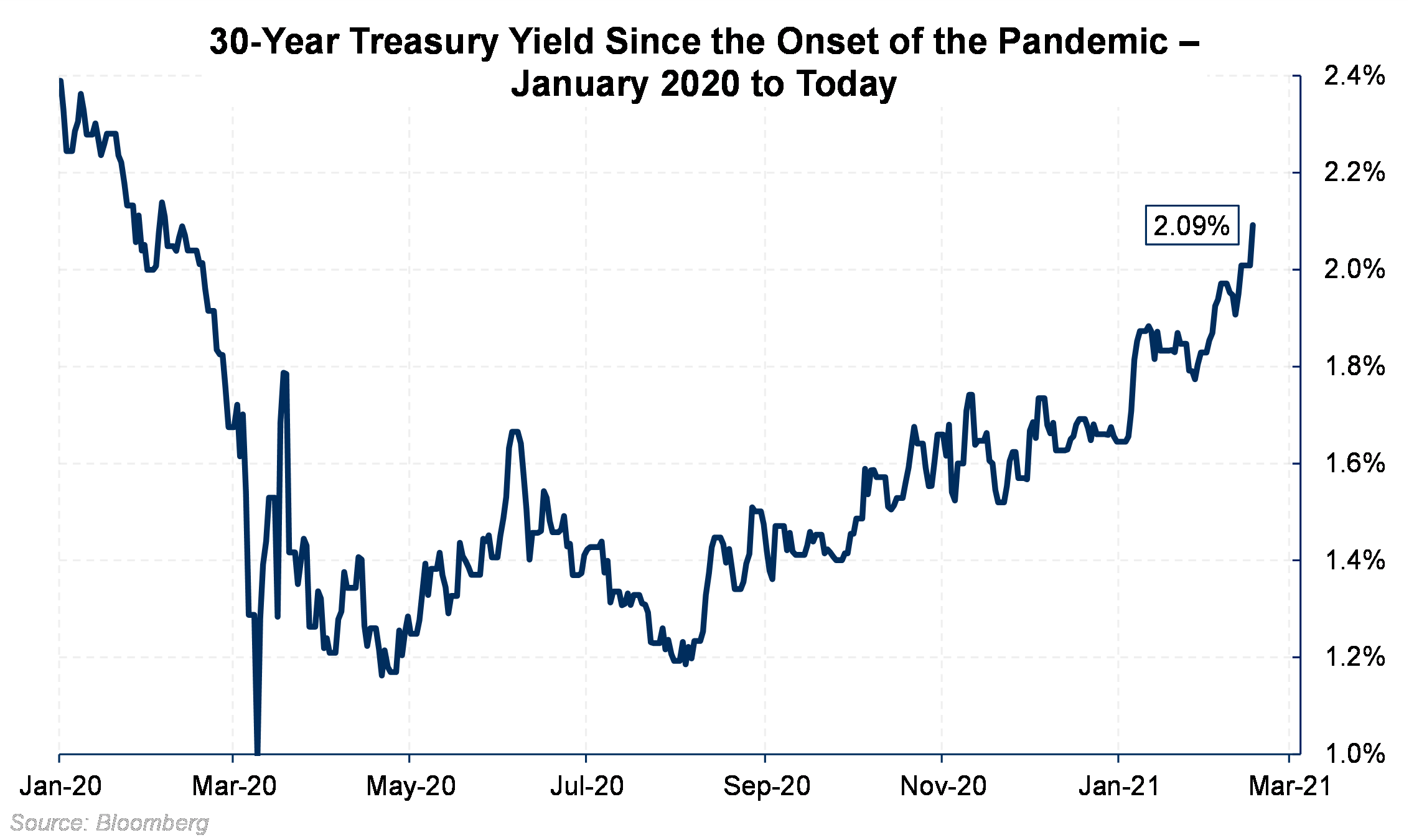 Furthermore, market proxies of inflation expectations accelerated as the yield curve tested its steepest levels in more than five years.

The closely watched yield spread between two-year and ten-year Treasury notes has steepened to 119 basis points (1.19%), its highest level since April 2017: 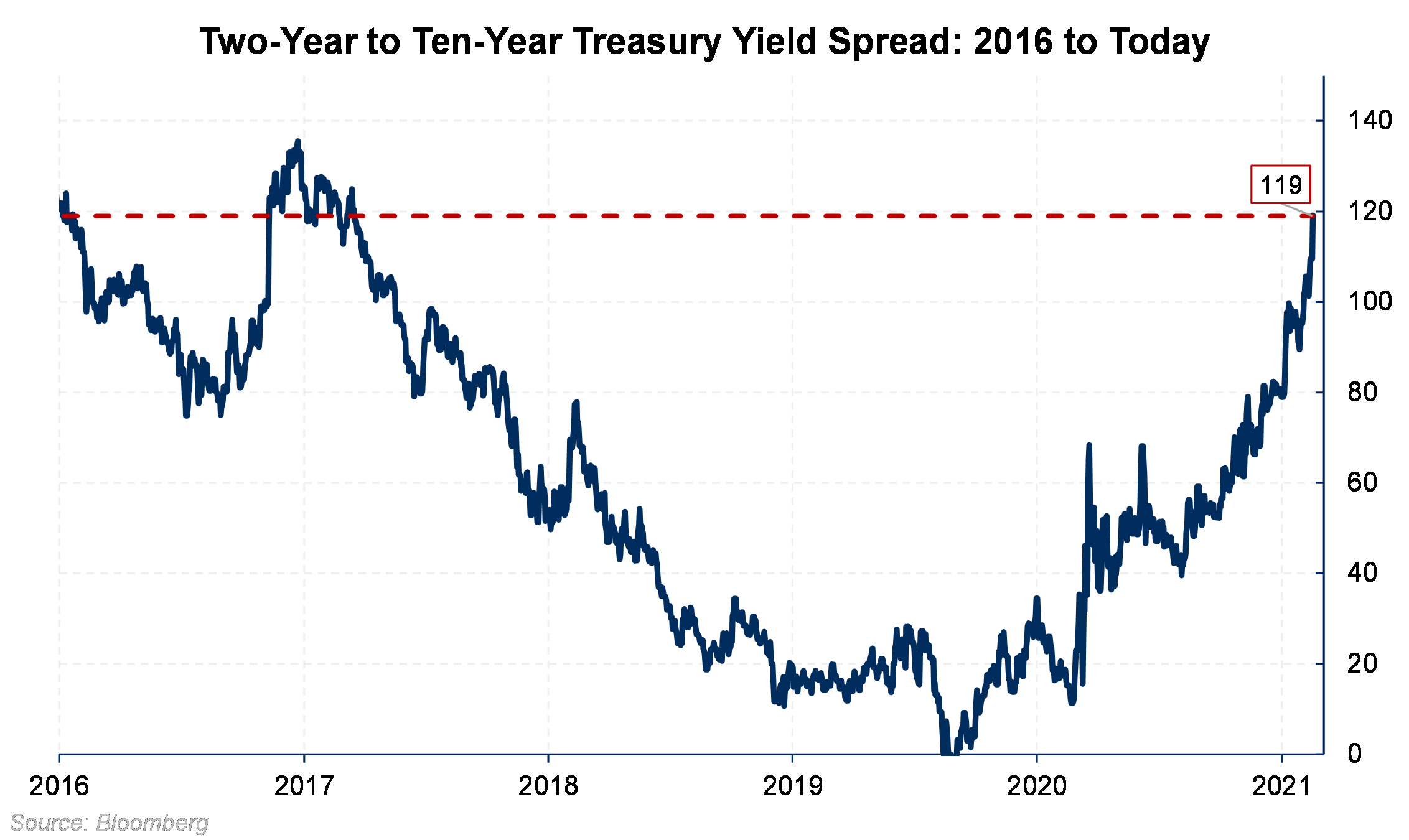 The other common inflation spread as indicated between the five-year and the 30-year Treasury yields rose to 151.5 bps (1.515%), its steepest level since October 2015: 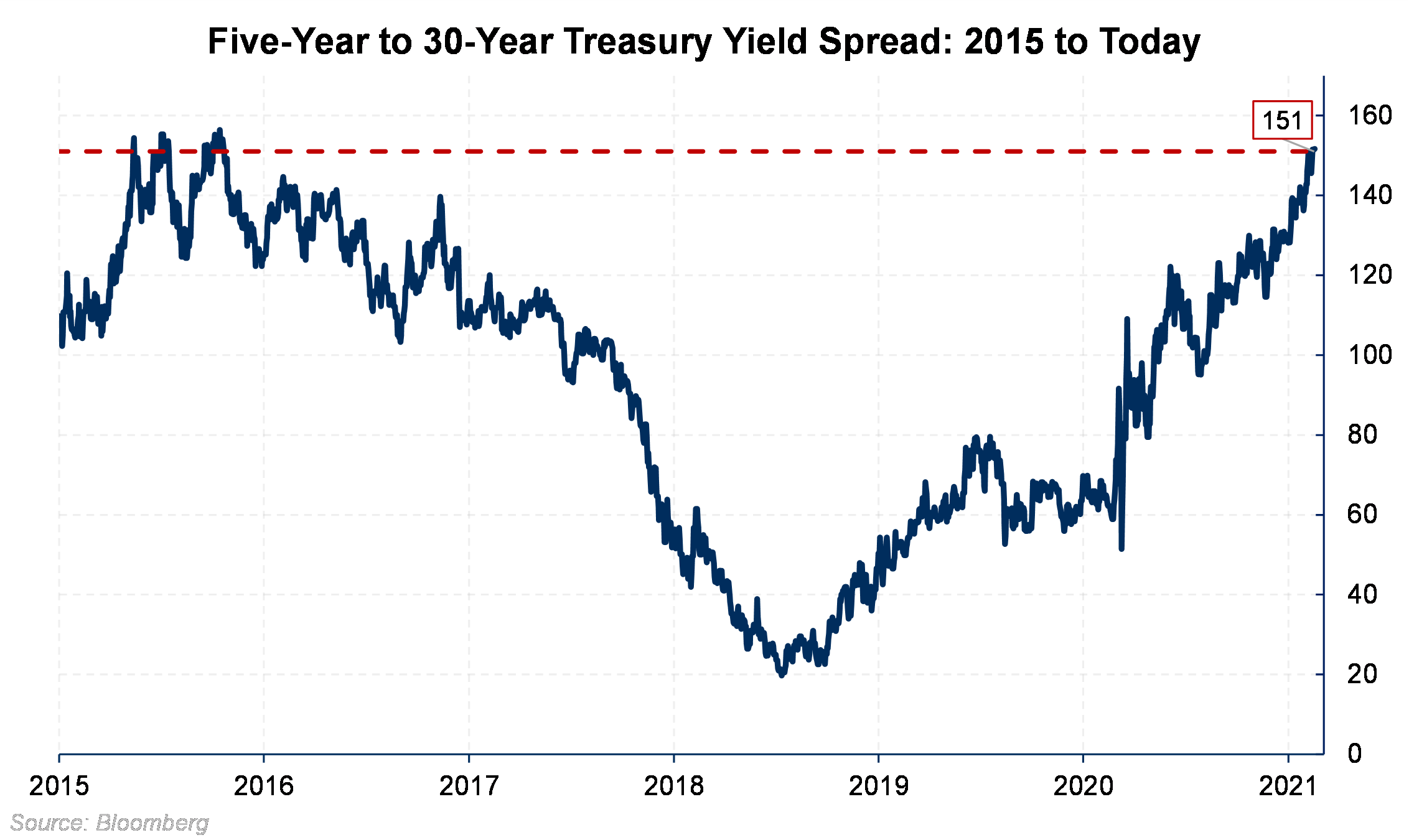 As interest rates have risen recently, the market has been anticipating higher inflation. Even though it is still expected to remain mild in the near-term, investors are watching for any early signs. Economists expect in coming months that the impact of stimulus spending could pressure prices.

The Federal Reserve has changed the way it looks at inflation and now considers a "range" around its prior 2% target. That means inflation could run a little hotter than the Fed would have previously accepted before tightening policy - that is, raising short-term borrowing rates to slow it.

Fed officials feel that allowing the economy to run hotter for a period will help not only reduce unemployment, currently at 6.3%, but also make job gains more inclusive in terms of rate and income. Long-term unemployment is nearing a historical peak almost a year after the pandemic began. Nearly 9 million fewer Americans are working now than last February.

U.S. consumer sentiment unexpectedly fell in early February amid growing pessimism about the economy among households with annual incomes below $75,000, even as the government is poised to deliver another round of COVID-19 relief money.

Consumers also appeared to anticipate higher inflation in the near-term. The survey's one-year inflation expectations rose to 3.3% from 3.0%. It is unlikely that if this consumer forecast comes to fruition that it would fall within the Fed's 2% range comfort zone, causing them to take anti-inflationary action, such as raising their federal funds target range and short-term borrowing rates along with it.

Investors are also focused on Treasury bills after the Treasury Department earlier last week said it will cut bill issuance to reduce its cash balance. This action is one of the primary drivers moving SOFR and LIBOR levels to their recent lows — with short-term investment rates so low, banks are choosing to just hold excess cash.

Analysts expect the Federal Reserve to hike the interest it pays on excess reserves (the "IOER") if Treasury bill rates fall below zero to maintain U.S. government rates from falling into the negative category, an assurance often mentioned by the Fed. The one-month and three-month Treasury bills currently only yield three to four basis points (0.03% to 0.04%).