Inflationary Pressures Continue to Reverberate Through the Rate Market

While global stocks are set for their first weekly drop since early October, their swings have been muted compared with the most recent gyrations in the bond market. Bond traders fear elevated inflation could lead to tighter monetary policy, while equity investors’ focus on a strong earnings season has tempered concerns and equity volatility.

Data this week showed consumer prices accelerated at their fastest annual pace in over 30 years, adding to evidence of inflationary pressures being more permanent than transitory. Risks are building for bond investors as persistent elevated inflation could force the Federal Reserve to tighten monetary policy faster than anticipated.

The U.S. consumer price index (“CPI”) increased 6.2% in October from a year earlier, beating consensus expectations that called for rise of 5.9%. This is the highest reading of the CPI since December 1990. Stripping out volatile food and energy prices, the so-called “core CPI” for October was up 0.6% against estimates of 0.4%. Annual core inflation ran at a 4.6% pace compared with the 4.0% expectation, its highest level since August 1991. 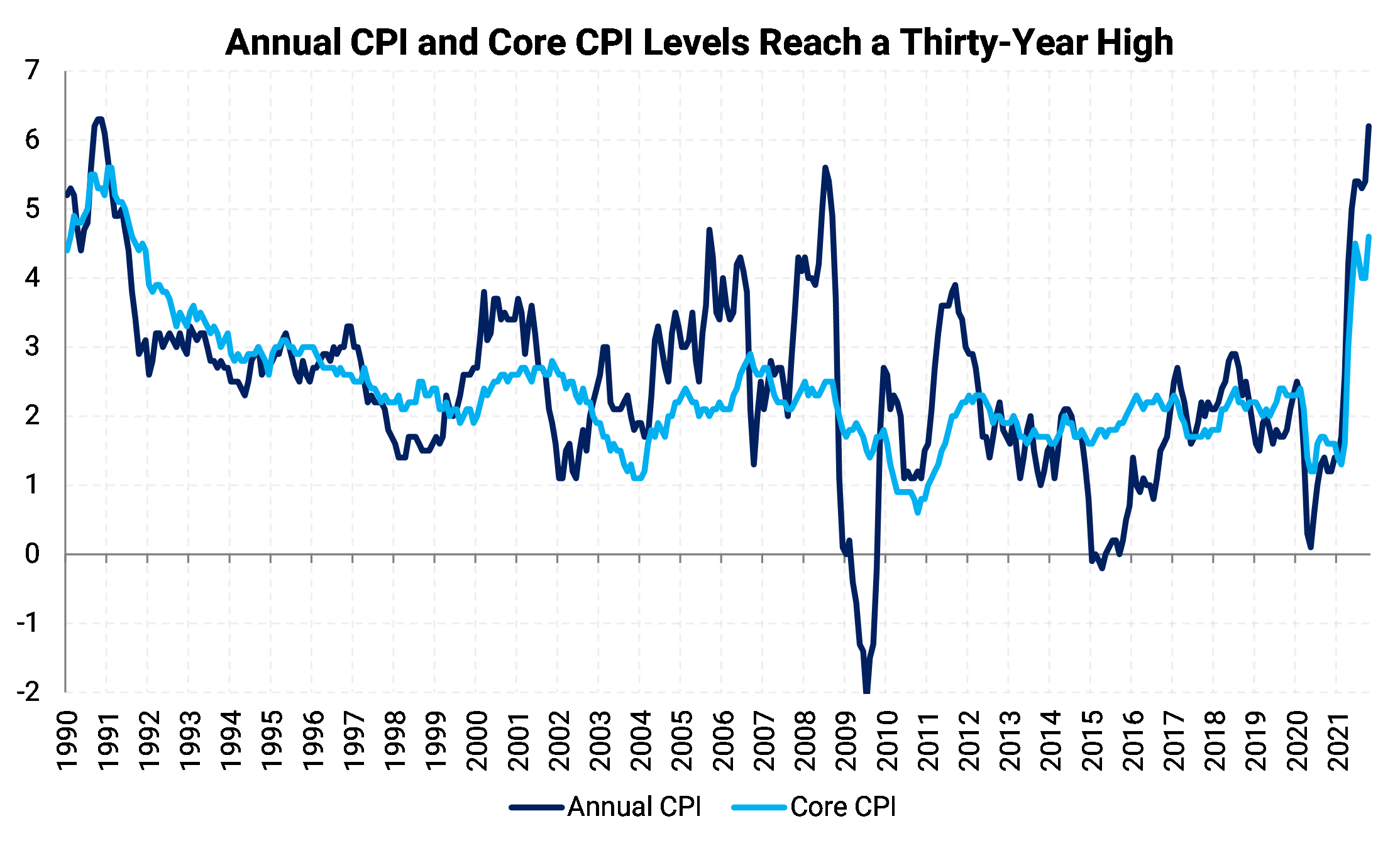 Higher prices for energy, shelter, food, and vehicles fueled this supercharged CPI reading and indicated inflation is broadening out beyond categories associated with reopening. The pickup suggests higher inflation will be longer lasting than previously thought, putting pressure on Fed officials to end near-zero interest rates sooner than expected and potentially to quicken the pace of the bond buying taper announced last week.

In October’s CPI report, prices for new cars rose 1.4% as a global shortage of semiconductors continues to limit inventories and drive up costs. Used-vehicle prices jumped 2.5%.

Inflation-adjusted average hourly earnings fell 1.2% in October from a year earlier. Wages have strengthened markedly in recent months, with some measures rising by the most on record, but higher consumer prices are eroding Americans’ buying power.

Treasury Secretary Yellen reiterated her view that elevated U.S. inflation won’t persist beyond next year and said the Fed will not allow a repeat of 1970s-style price rises. Still, traders worry the latest figures may be enough for the Fed to act sooner rather than later with raising rates.

Prices paid to U.S. producers also accelerated in October, largely due to higher goods costs, driving concerns about the persistence of inflationary pressures in the economy. The producer price index (“PPI”) for final demand increased 0.6% from the prior month and 8.6% from a year earlier. Excluding the volatile food and energy components, the so-called “core PPI” rose 0.4% in October and was up 6.8% from a year ago. Both these PPI and core PPI levels are the sharpest annual increases since the measurement of the PPI: 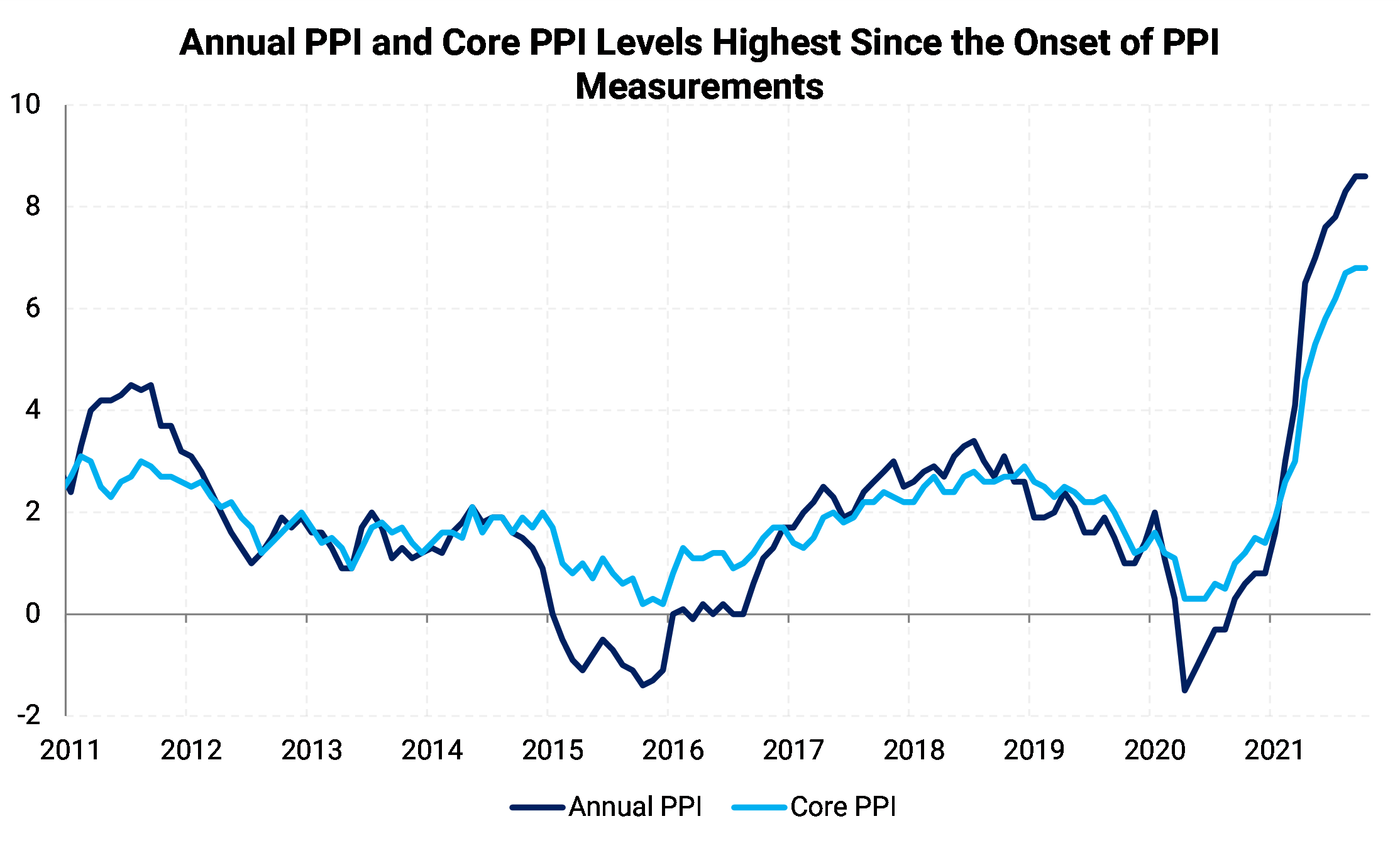 Over 80% of the October increase in prices for final demand services can be traced to margins for automobiles and automobile parts retailing, which rose 8.9%. As well, the indices for apparel, footwear, accessories retailing, truck transportation of freight, food and alcohol retailing, hospital outpatient care, and machinery and equipment parts and supplies wholesaling all moved up.

The PPI report underscores how transportation bottlenecks, materials shortages, and increasing labor costs have sent prices soaring across the economy in recent months. And, with ongoing supply-chain challenges anticipated to linger into 2022, sustained price increases at the producer level foreshadow additional consumer price increases in the coming months.

Shorter-term Treasury yields with two to five years maturities are up more than longer-term yields as market participants increasingly are pricing in a higher probability of a Fed rate hike in June 2022. While some market participants believe that the Fed will raise rates in June 2022, others believe the first rate hike will not happen until the end of 2022, or even the first quarter of 2023.

Furthermore, the number of rate hikes is also still under critical debate as those who foresee rate hikes as early as June 2022 see as many as three rate hikes (of 0.25% apiece) before the end of next year as compared to those who call for a single hike by the first quarter of 2023. In summary, this divergence in rate hike expectations, driven by differing views on inflation and the Fed’s potential reaction to it, is increasing volatility in rates across the yield curve out to the ten-year maturity.

Take a look at the change in the five-year Treasury yield this week alone, despite the lack of Treasury trading Thursday for the Veteran’s Day holiday. The U.S. debt maturity that is most responsive to changes in Federal Reserve policy is leading the fallout from this week’s shock CPI inflation print. Five-year Treasury yields jumped 20 basis points (0.20%) this week, the biggest surge in two years, as traders consider the potential for earlier-than-expected Fed rate increases: 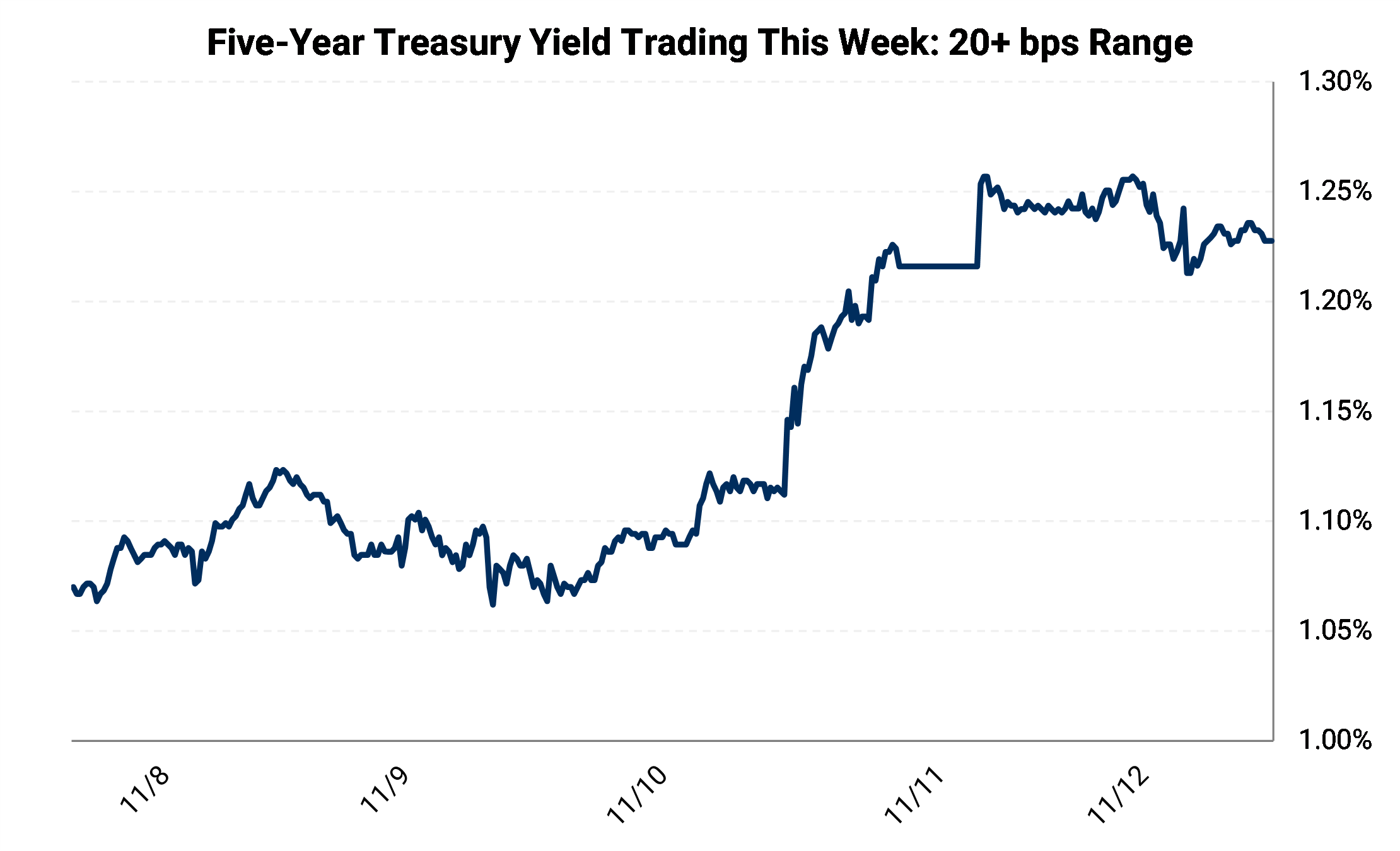 The University of Michigan consumer sentiment survey, which tends to be more sensitive to inflation than its Conference Board equivalent, dropped to a level of 66.8, lower than the expected 72.5 reading and its lowest level in a decade. The shortfall was felt over both the current conditions and expectations components. The subcomponent on “bad time to buy large durables because of high prices” surged to an all-time high. 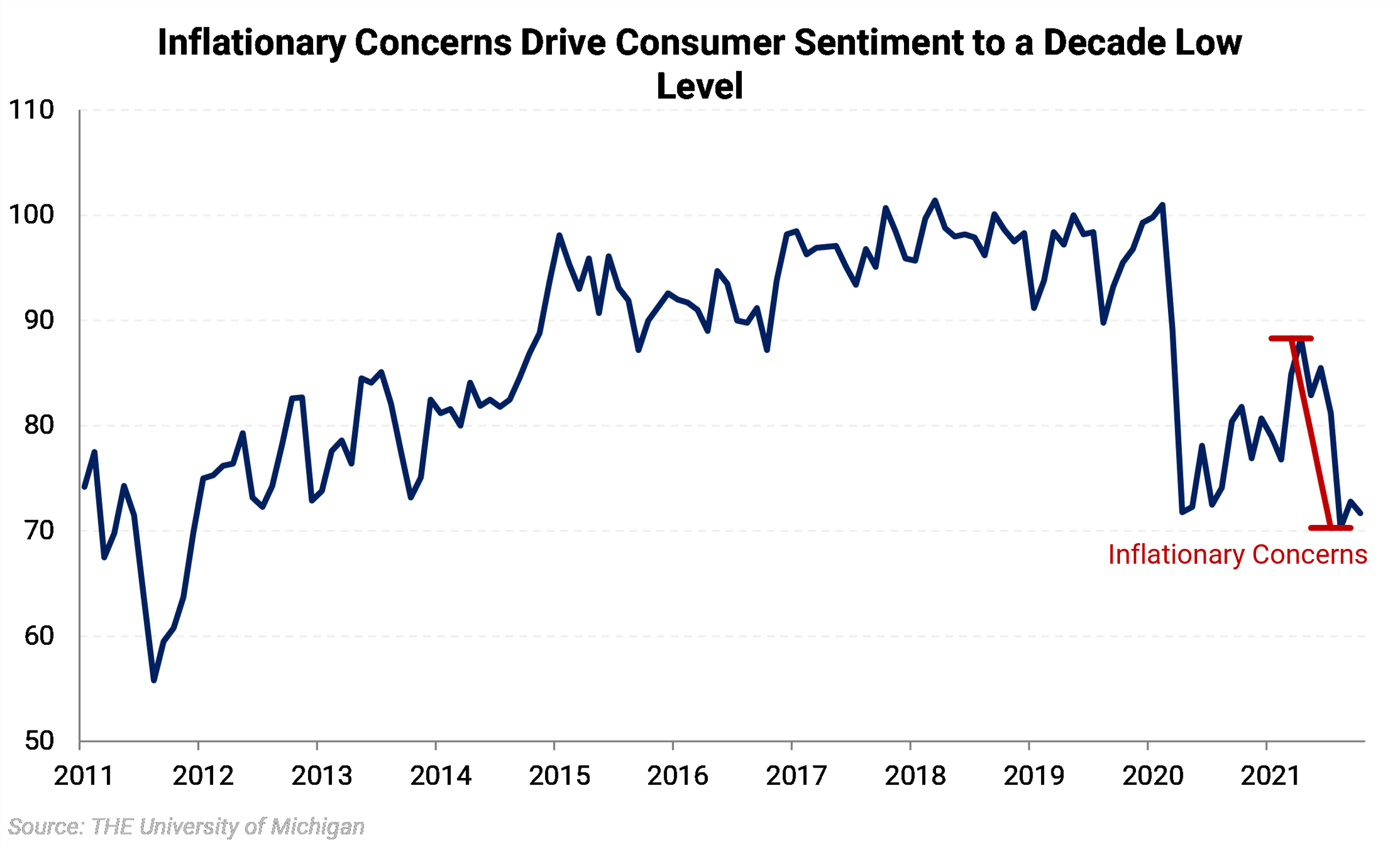