The selloff in the Treasury market continued this week after coming off a long Presidents' Day weekend. Reflation trades continue to proliferate, as fixed rate Treasury bonds were sold to raise capital to both invest in equities and in floating rate debt - one of the ways fixed income investors hedge against the anticipation of rising interest rates. Treasury security selling was also driven by primary dealers who had to establish the required capacity for this week's Treasury auctions of new 20-year bonds and 30-year TIPS (a.k.a. Treasury Inflation-Protected Securities). Additionally, retail sales in January greatly outpaced market expectations as the most recent $900 billion stimulus relief package began to work its way into the economy.

In all, intermediate and longer-dated Treasury yields and swap rates are at or near their respective one-year highs. 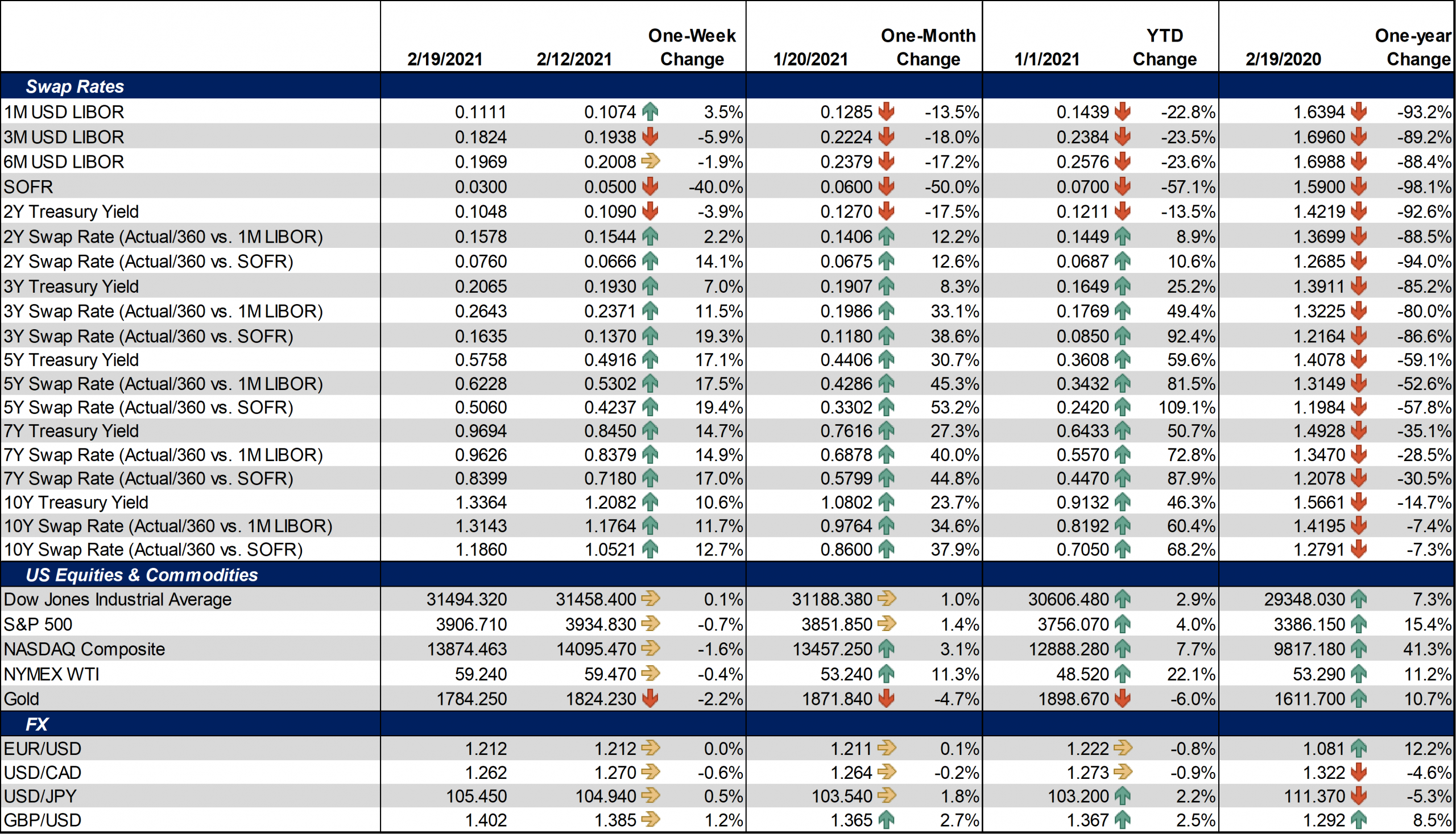 The ten-year Treasury yield spent the holiday-shortened week at or above 1.28%, trying to break and stay above the 1.30% level, making 1.30% the new floor from its previous, short-lived 1.20% floor: 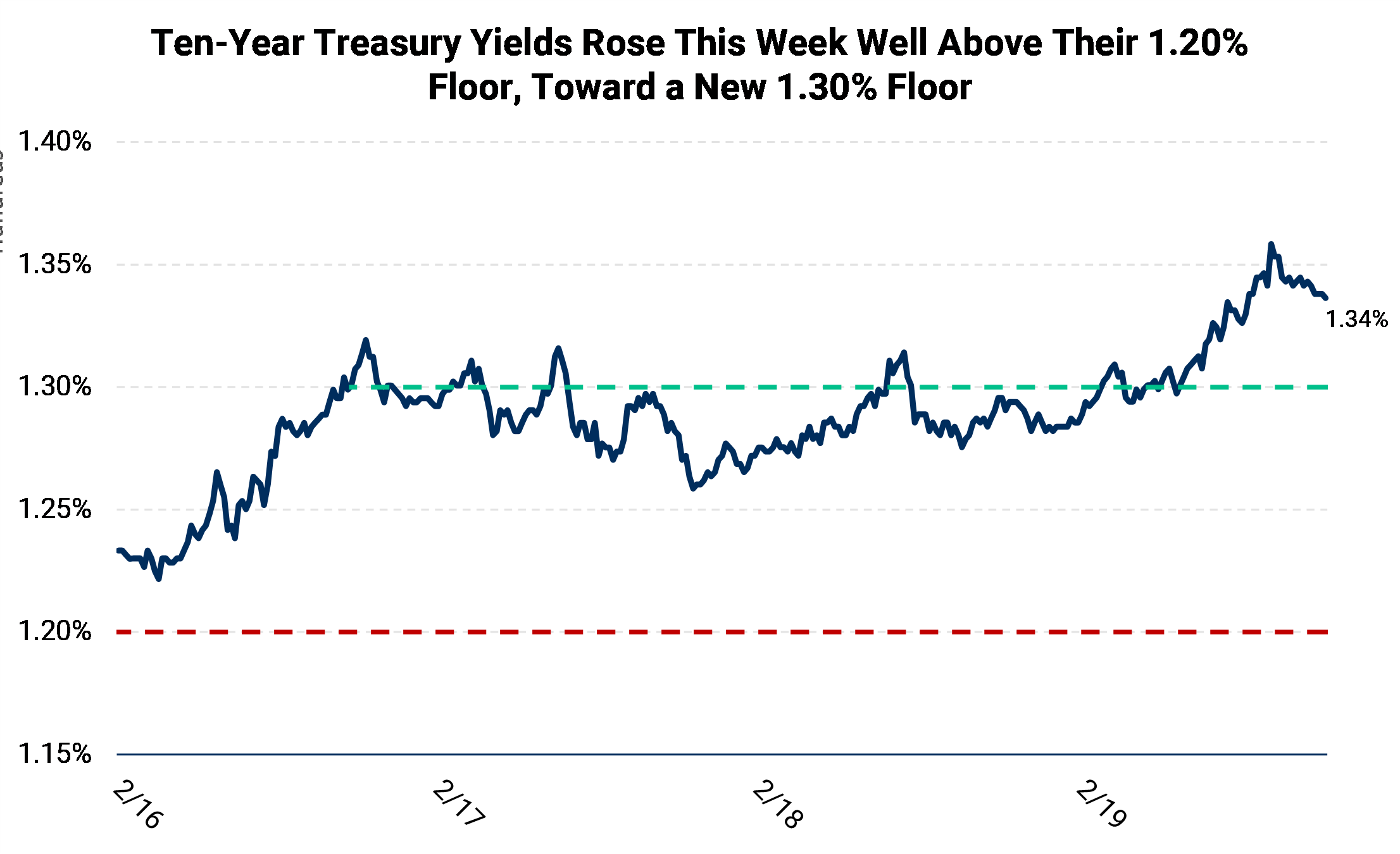 Even intermediate five -year Treasury yields have risen beyond 0.45% since the start of the month and are looking to be setting a new floor at around 0.55%: 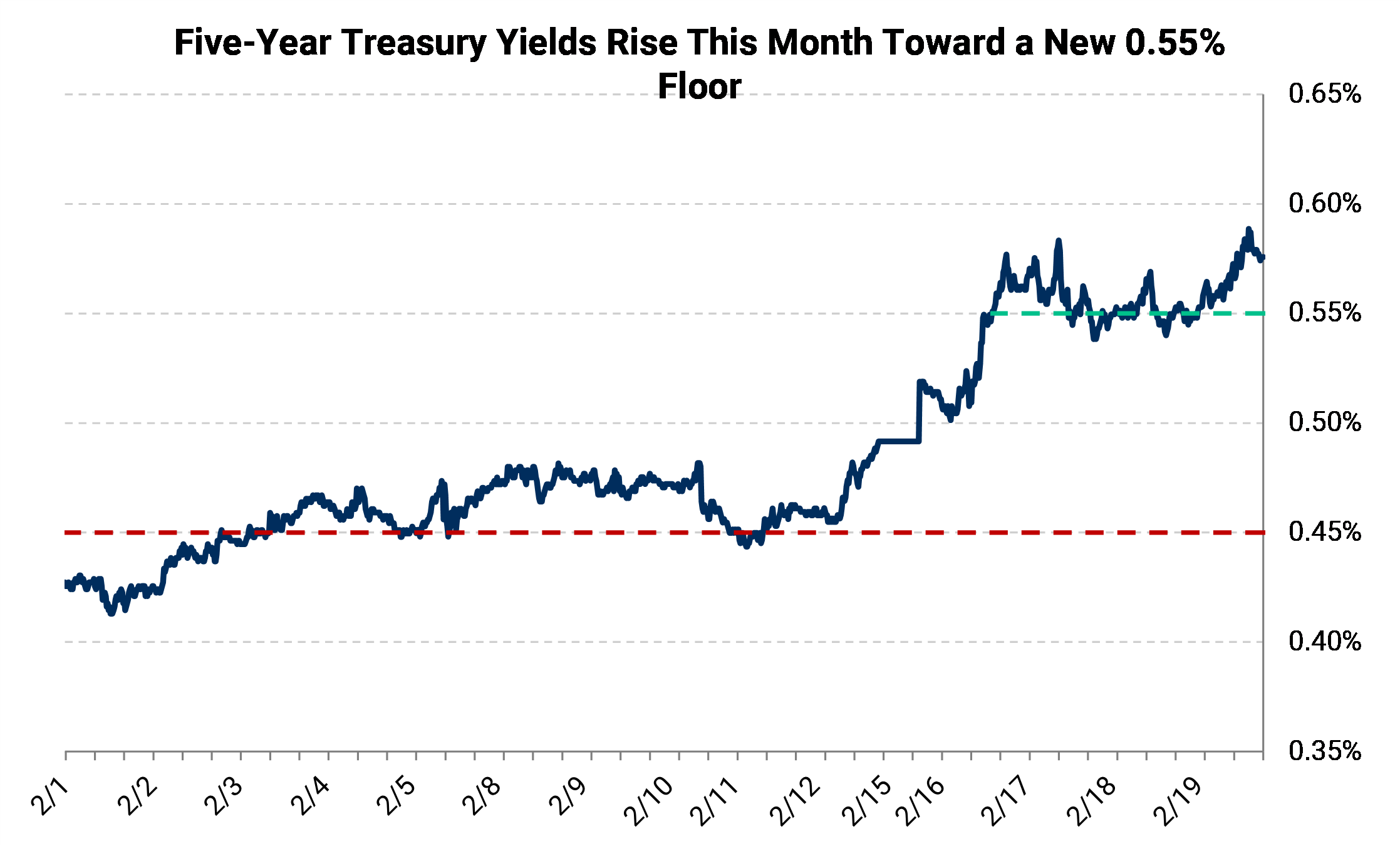 This has led the five-year interest rate swap to more than double over the past six months from around 0.25% to roughly 0.60% today (on a monthly, Act/360 basis, against one-month LIBOR). Such rising rate activity demands review by floating rate debt borrowers and serious consideration of hedging floating interest rate risk exposures.

This broad activity is all part of steepening Treasury yield and interest rate swap curves, with the very short end (funding rates under one year out to the two-year Treasury yield) still being pinned by Federal Reserve policy. This is why there is so much focus and discussion on:

The Federal Reserve Open Market committee ("FOMC"), the Federal Reserve Chairman Jerome Powell, and the new Treasury Secretary Janet Yellen, so far have all stuck to their guns by tying any rate targeting increase to a clear increase in inflation beyond an undefined "average range" of 2.0%, motivated by the extremely desperate need to increase employment, especially among the worst hit lower-income and minority workforces. Yellen this week has pointed to the more than nine million Americans still unemployed compared to pre-COVID pandemic crisis, with four million (primarily mothers) having left the workforce entirely. She also cited the danger of a "permanent, life-long toll" for people put out of work over the long haul.

Historically, the Fed has not had the most supportive track record in waiting for employment in these hardest hit categories before taking action to fight inflation by raising rates before these lowest earners have reached full employment and income. But in this new world and Democrat controlled White House and Congress, along with Powell who took office as chairman of the Board of Governors of the Federal Reserve System in February 2018 for four years and has expressed the desire to remain as Chair, we may see a new attitude, if not new leadership, that will hold back on its full set of easing policies until the bottom of the labor force sees a significant boost.

And, if this scenario unfolds, the question will be if such delayed action allows inflation and interest rates to rise much higher than in the past when the Fed typically begins to take defensive monetary action. This is the tradeoff that the Fed, the Treasury, the Biden administration, Congress, and most forcefully, the fixed income markets, may be forced to face.

Consumers ushered to spend their stimulus checks in January

Monthly retail sales jumped 5.3% to start 2021, well ahead of expectations for a less modest 1.2% rise. A month after Congress approved a $900 billion additional stimulus package, shoppers were armed with $600 checks they used to buy a variety of goods. 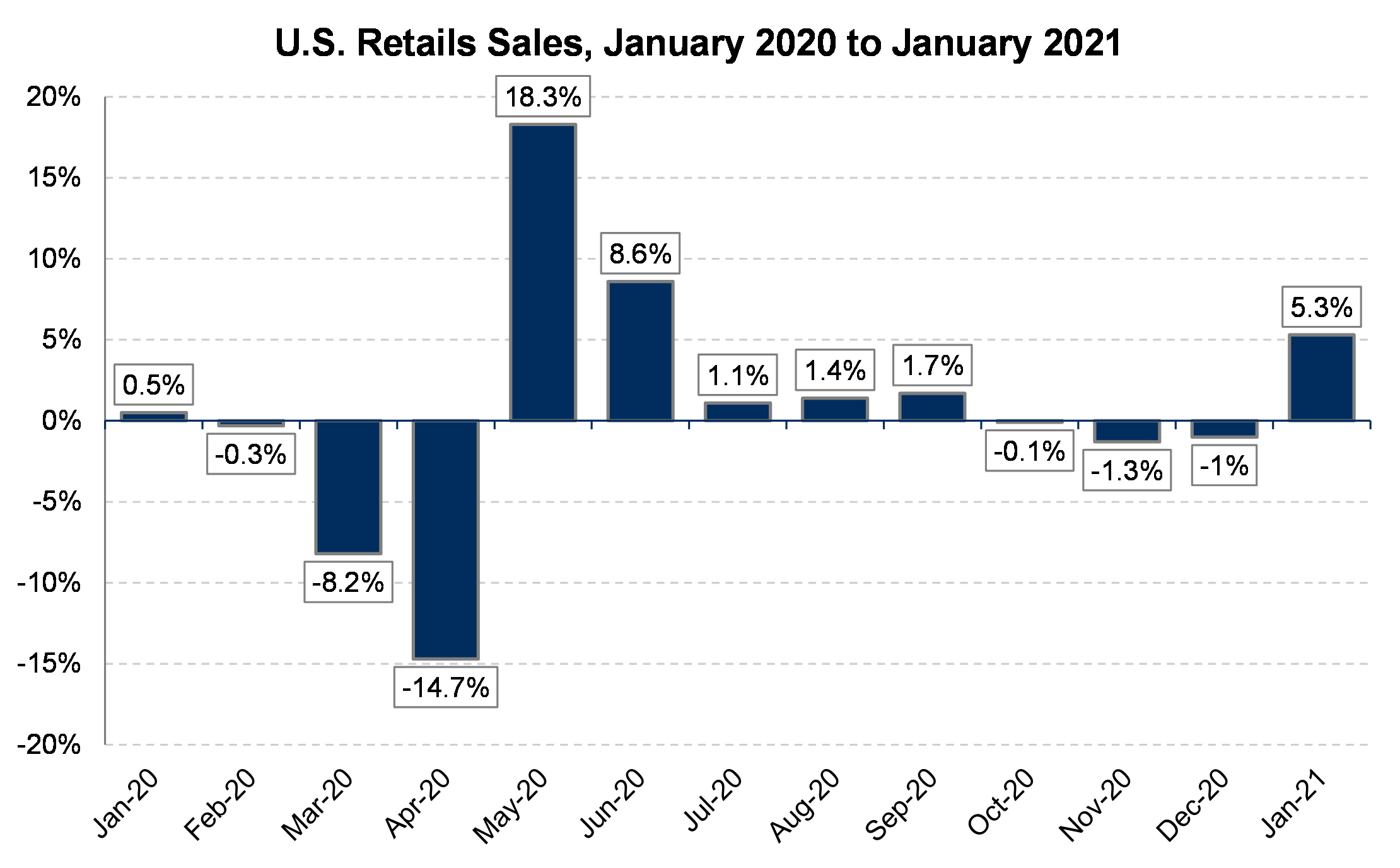 A closely watched measure of retail sales that excludes autos rose 5.9% in January, also far ahead of estimates that called for only a 1% increase, in further display of unexpected consumer spending strength.

The jump in consumer spending came at a time when expectations for growth in the early part of 2021 were muted as the economy continues to shake off the pandemic-induced slowdown. Every major category of spending saw monthly increases in January. This even includes food and drinking establishments which saw a gain of 6.9% for the month, although year-over-year, were still down mightily by 16.9%.

This was the first corporate SOFR-based bond issuance outside of those previously issued by the U.S. government and financial institutions. This action is being pushed heavily by regulators to all issuers, both public and private, and is much needed by the fixed income and derivatives markets to build a more liquid, forward SOFR yield curve.

These SOFR-based notes were oversubscribed six times over, displaying the current demand for floating rate investments that have any decent yield to them. Investors are increasingly taking on more reflation trades, anticipating higher floating rates into the future. Traders like interest payments that increase in line with the market, especially if inflation rises. Intermediate and longer-term government bonds have been selling off as investors start to factor in the full economic impact over time of a stimulus plan totaling as much as $1.9 trillion, with the ten-year Treasury yield climbing this week to its highest level in a year.

That move has eclipsed narrowing risk premiums, which are approaching post-crisis lows, sending all-in investment-grade bond yields to their highest levels since November. That has spurred demand for notes with floating rates, which generate higher yields as underlying benchmarks rise.

This increasing demand for floating rate investments is yet another indication of the fixed income market's expectation for increasing interest rates and the need to proactively take steps to hedge inflationary risks.