Is Winter Over? No, But Gas Scarcity Is No Longer Likely

This winter's natural gas prices have plunged. Mild weather has severely reduced gas demand. The 1Q2022 strip has been the hardest hit,  nosediving about $2.65/MMBtu from the early October high of $6.30/MMBtu. 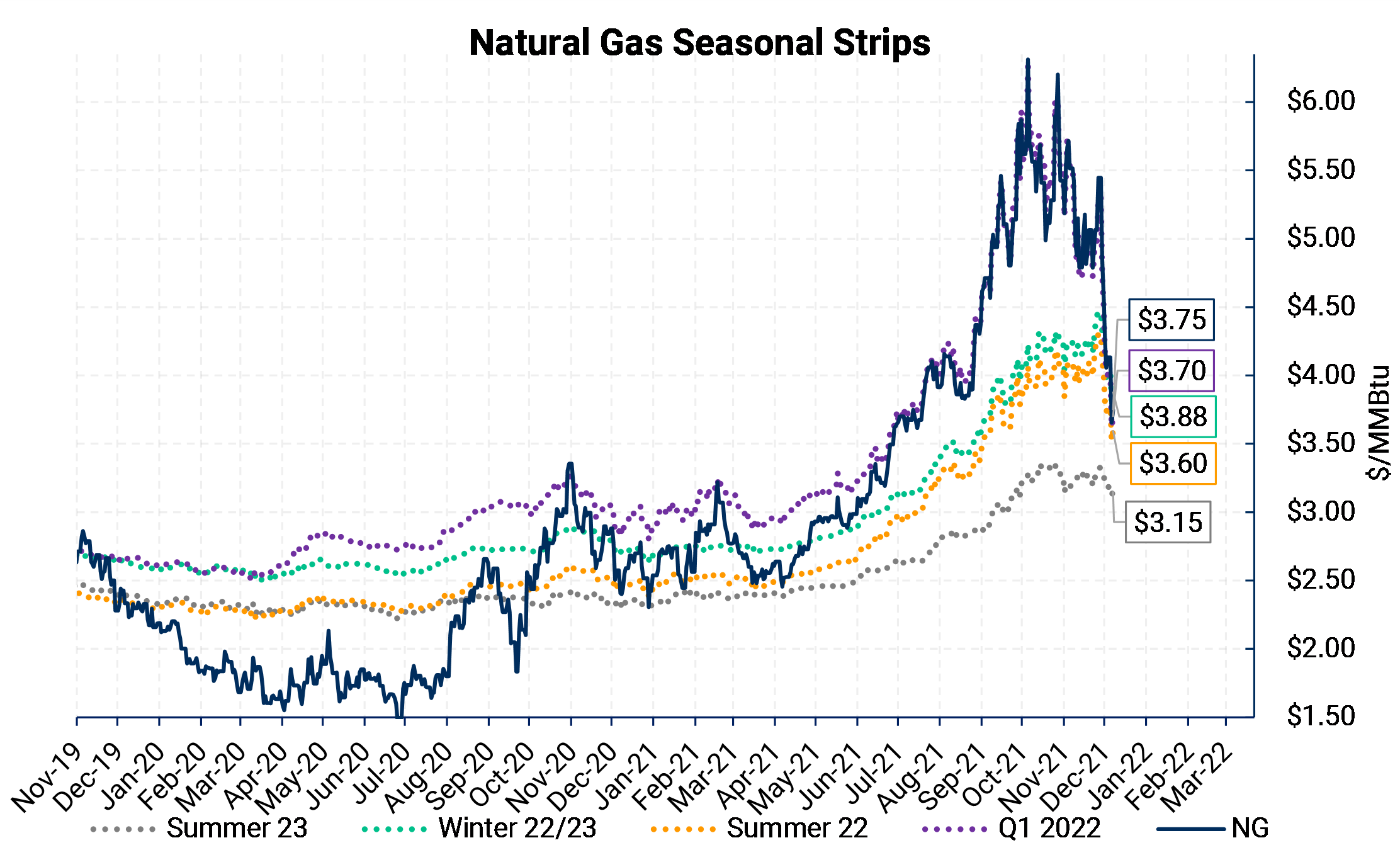 Why such a dramatic drop? Mild weather is responsible for most of the collapse. In late summer and early fall, a rally in winter gas prices was consistent with concern that inventories would be insufficient for demand if winter started cold. AEGIS has long been saying that the market was likely pricing in the risk of a cold winter; below-average temperatures could easily have made gas scarce.

Take a look at the January contract evolution below. In early October, the January 2022 contract was trading near $6.50. At that time, the contract options market had implied a 22% chance the natural gas would reach $15. There was a‘fear premium’ priced into the market. However, as time progressed from early October, the weather was almost continuously mild. The pause in demand allowed storage levels to tick higher and compress the storage deficit to the five-year inventory average (see the chart below). 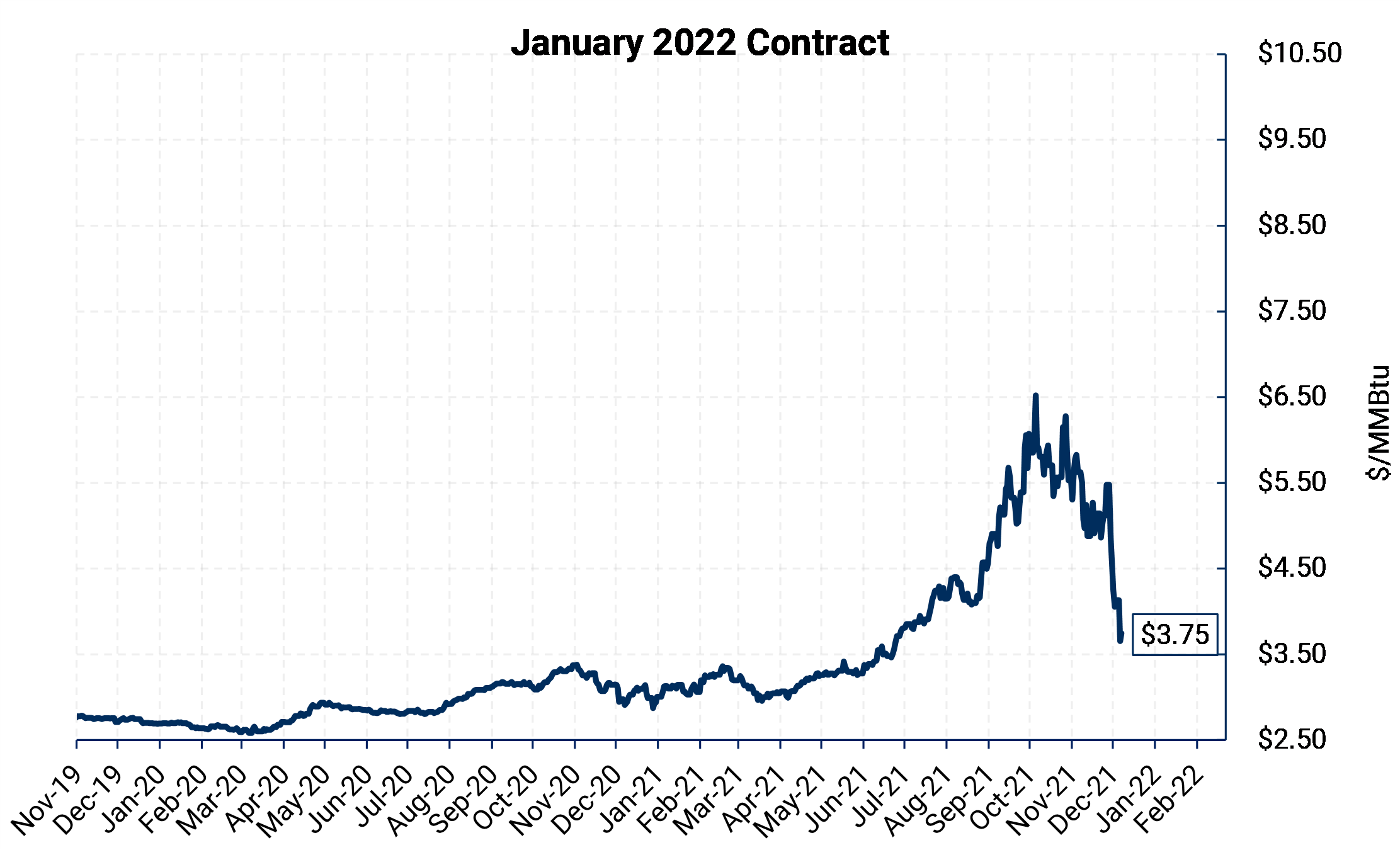 To see exactly how the weather progression took a toll on Winter 2021-2022, let’s isolate each month. This October ranked as the sixth warmest in the past 127 years, according to data from NOAA. As a result, the storage deficit to the five-year average contracted from -200 Bcf to only about -100 Bcf by October 31.

November weather was about average when compared to the 10-year climate normal. However, if you believe the market was pricing in cold winter as we do, a “normal” November was likely interpreted as bearish.

The October and November combo was mild, but December is trending even warmer. December weather started warm, and forecasts for the middle third of the month are calling for the 3rd fewest gas-weighted HDDs since 1950, according to the Commodity Weather Group.

First Half of December Anomaly 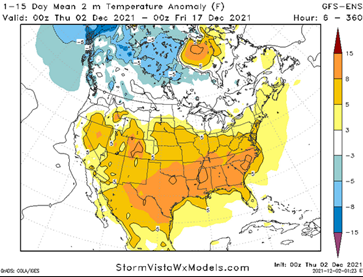 What does all this warmth mean?

Obviously, lower demand, but more importantly, it removes the likelihood of gas scarcity in the later winter months. Suppose 200 Bcf would have been burned in October through mid-December if the weather had been average. That 200 Bcf of supply is now available for the end of winter. We’re now not as likely to have late-winter shortages. Natural gas priced at $6 in early October was appropriate if most of the winter were cold; however, it looks like at least through mid-December, the opposite is happening.

What does this mean for the rest of the curve?

While tenors beyond this winter have fallen slightly, most of the selling action has been concentrated through 1Q 2022. Gas fundamentals remain bullish, and the weather has less of an effect on the Summer 2022 strip and beyond.

After the rally that began in July, this winter’s tenors had been quite dislocated from the rest of the curve.  After the warm start, the winter strip has compressed and priced closer to the Summer 2022 strip.  The summer pricing has been quite firm. We think this winter’s recent weakness should have little bearing on the coming summer strip, outside of a very mild end to winter, or a change in the non-weather supply-demand balance. We believe continued strength in the fundamentals should keep the curve buoyed.