Despite the Food and Drug Administration's likely emergency authorization of Pfizer's COVID-19 vaccine and the possible first doses to be distributed and administered as early as this coming Monday, the U.S. economy has a rough road ahead. It will be several months before enough Americans are vaccinated such that many segments of the economy that are suffering so severely can begin to rebound. The bridge to reach this inflection point includes additional fiscal support. A political compromise and legislative agreement on the next round of aid from Congress, that appeared so close just a few days ago, are faltering and weighing on the markets.

Bipartisan talks on a pandemic relief bill, which include the necessary funds to distribute the Pfizer vaccine in the coming weeks and months, are hung up on differences between Republicans and Democrats on shielding companies from virus-related lawsuits, raising doubts about a deal and risking dragging negotiations past next week despite an apparent compromise on state and local funding. As well, the Senate faces a potentially tumultuous session Friday as lawmakers struggle to approve critical legislation and avert a federal government shutdown at midnight. The House of Representatives passed a one-week stopgap spending bill Wednesday in a 343-67 vote, and the Senate's approval is needed to get it to President Donald Trump to sign the measure before funding runs out.

Admiral Brett Giror, the Assistant Secretary for Health at the U.S. Department of Health and Human Services, is forecasting that virus inoculations may reach 20 million people in December alone, rising to 30 million in January and eventually to a total of 50 million by the end of February. Many argue these numbers based on distribution and supply limitations. The UK has already approved the Pfizer vaccine and has commenced inoculations, or as the Brits say, "jabs." So has Russia, who needed no formal domestic approval for its own Sputnik V vaccine.

But even if 50 million Americans are hopefully vaccinated by March, without immediate fiscal action, the economy will certainly continue to reverse course, creating a deeper hole from which to climb and an increased level of permanent damage that will take longer for an eventual strong, healthy economy to mend — particularly unemployment. This current discouraging state of economic affairs has led to the first weekly decline in broad equity market indices in a month and a decline of the benchmark ten-year Treasury yield from its recent high of just over 0.98% to a return below 0.88%.

First-time claims for unemployment insurance totaled 853,000 for the week ended December 5th, an increase from the upwardly revised 716,000 total a week before, the Labor Department reported Thursday. This was about 17% higher than the median economic forecast that called for a rise in new claims to 730,000. This has been the first time that weekly initial claims moved above the 800,000 range since the first full week in October, and its highest level since mid-September:

These increased filings were driven by the increasing amount of business shutdowns in reaction to the growing spread of the coronavirus pandemic.

Distribution of the first virus vaccines could help ease restrictions, but it will take?months for a meaningful number of Americans to be vaccinated. The timing for a reversal of newly imposed shutdowns and the hiring and re-hiring of staff is still unclear.

Continuing jobless claims, which reflect Americans on ongoing unemployment benefits, jumped by 230,000 to 5.76 million for the week ended November 28th. This compared to median expectations that forecasted continuing claims to measure 5.21 million. This was also the first weekly increase in this figure since August. To point out, this number does not represent the total number of Americans that are unemployed, as many have exhausted benefits. The total number of unemployed is roughly 10.7 million.

In any event, this recent increase in joblessness has no stop in near site and is clearly a driver for immediate additional fiscal relief.

Given the global pandemic and its accompanying economic collapse, it has been a year in which the Federal Reserve ("Fed") has taken dramatic steps and initiated unprecedent policies. From the initial rate target cut to zero and emergency aid programs in March to its decision to place inflation at the heart of its monetary policy, the central bank has taken a proactive approach, with Fed officials consistently reiterating their sensitivity to the markets and the economy's needs.

The Federal Open Market Committee ("FOMC") is scheduled to meet next week on December 15th-16th. There are a few potential moves by the FOMC and the Fed that are being closely watched by the markets. The Treasury's decision not to extend some emergency Fed lending programs beyond year-end has increased expectations that Fed policy makers may act soon.

As the economy regains strength from its present fallback, the Fed could reduce the size of its asset purchasing program. That would lift interest rates and pose a risk to stocks. The stock market has been powered by low interest rates and an economic recovery from the pandemic-induced recession. Short-term borrowing rates have been cut by 1.50% to nearly 0% while the benchmark ten-year Treasury yield has fallen to 0.89% from 1.80% at the beginning of January. This yield's low for the year was 0.55%, reached back in March.

The Fed has not only lowered benchmark rates, but it has also plowed money into long-dated Treasury bonds, keeping those prices up and yields low. That encourages investors to seek higher returns in riskier bonds, so they buy more corporate bonds. That, in turn, lowers the cost of borrowing for companies which produces the circular dynamics of forcing more money into stocks.

The Fed's pace of Treasury security purchases is an area of market concern. The Fed has been purchasing roughly $80 billion a week in Treasuries and $40 billion in mortgage-backed securities since June, for an annual run-rate of more than $6.2 trillion. That is more than 30% of expected gross domestic product in the U.S. for 2020. But the minutes from the FOMC's most recent meeting in November revealed some discussion among board members of slowing the pace of asset purchases. "While participants judged that immediate adjustments to the pace and composition of asset purchases were not necessary, they recognized that circumstances could shift to warrant such adjustments," the minutes read. They also said that, before the Fed lifts rates again, it should first taper the size of its holdings.

Another Fed action that the market will be closely watching for is yield capping, or "yield curve control", a tool that the Fed still has in its toolbox. While the Fed has moved away from capping targeted yields in exchange for allowing yields to float higher as long as inflation stayed within an undefined average of 2%, the Fed could always target any portion of the yield curve. If they do, it could be on the longer end if they feel that these rates are climbing to levels that will impede much needed economic growth.

The fixed income market's concern over this possible Fed action has led to a derailing of a classic recovery trade. The mere hint that the Fed may take additional steps to hold down long-term rates is causing Treasury traders to scale back so-called "steepener" bets, a tried-and-true strategy that has generated big profits over past years as economic rebounds pushed long-term yields higher.

Some bond traders are eliminating or reducing the size of their bets while others are utilizing options as opposed to actual Treasury securities. These actions reflect how the Fed's overwhelming presence in markets, which began with the 2008 financial crisis and shows no signs of ending, is distorting traditional trading strategies by reducing volatility, adding fuel to a record-setting advance in stocks, allowing Fed-backed credit markets to price at record levels, and curbing Treasury yields at levels that may no longer fully reflect market sentiment or investors' belief in the economy's strength.

Were it not for Fed policy makers frequently affirming that they will do whatever it takes to bolster the economy, the ten-year yield would have likely already pushed above 1.00%, perhaps well above it. Instead, this benchmark yield has edged lower every time it has come close to that level since March, dragged down by traders worried that the Fed could adjust its bond purchases.

This fear has led to a significant amount of yield curve steepening trades to be unwound in recent trading sessions as fixed income speculators have begun to rethink their steepening bets as the ten-year Treasury threatened to breach 1.00% once again. This has led to a flattening of the two-to-ten-year Treasury yield spread back down to as low as 75 bps (or, 0.75%) from its recent run up to over 82 bps (or, 0.82%) on Wednesday, a three-year high: 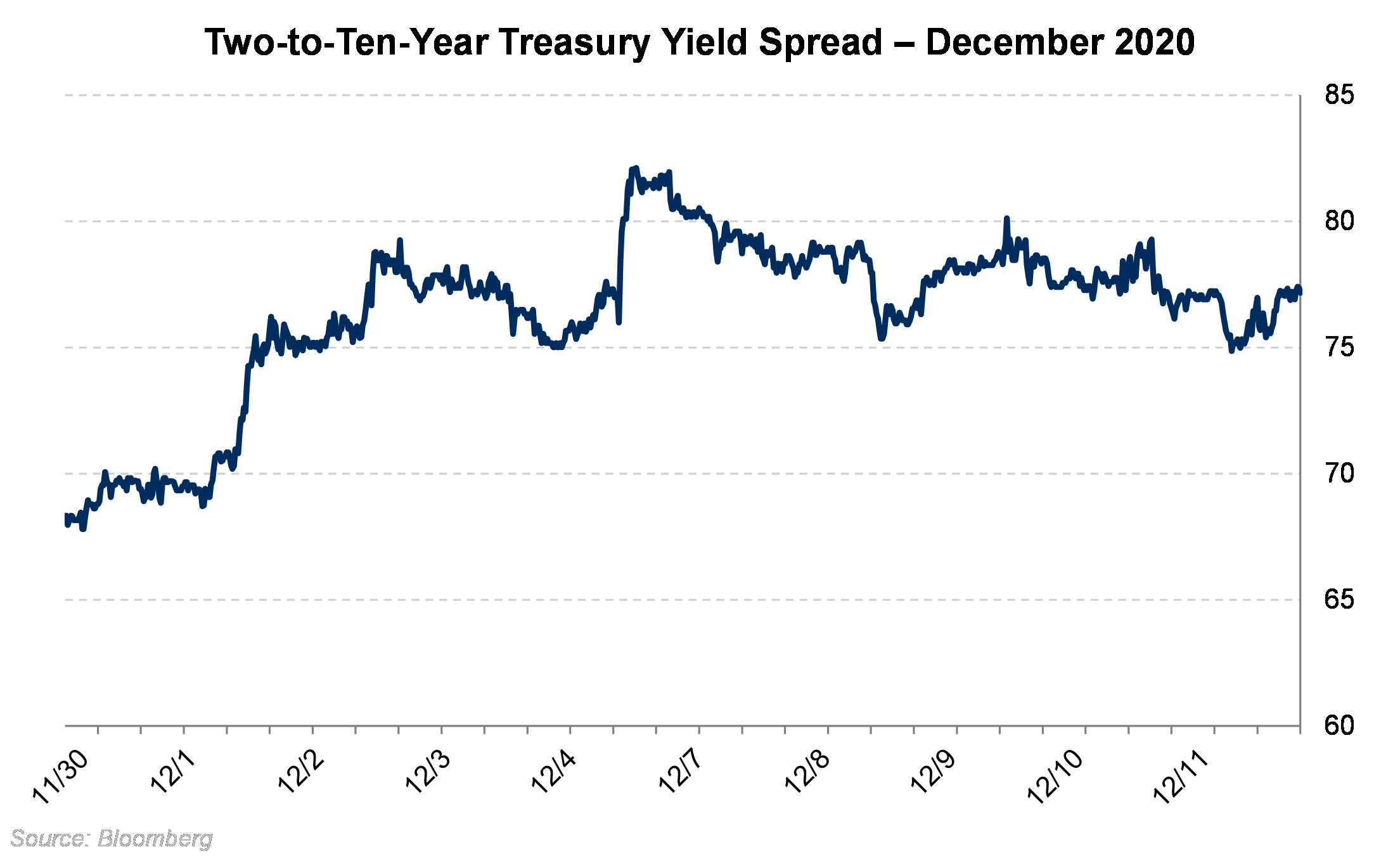 It is hard for bond traders to have conviction when they are just one announcement away from the Fed crushing their bets and ruining their year. With market expectations for Fed action tamping down yields, traditional signals sent by those rates have become less reliable for interpreting investor sentiment.

Higher yields are a double-edged sword for the Fed. On the one hand, they can signal greater confidence in the recovery and, indeed, Fed officials might even welcome them if they are accompanied by rising inflation expectations, which would most likely be accompanied with an improving employment picture. But the flip side is that rates climb too high, raising long-term borrowing costs, which is one of the last things the economy needs with the pandemic raging and millions still out of work.