A number of fundamental and market forces are aligning to push prices higher.

Oil prices have been trading near their highest level since 2014, and many analysts/agencies think prices have more upside from current levels.  Demand has surged around the globe, and U.S. production has stayed on the sidelines, while OPEC's response has kept oil markets persistently tighter. Since reaching a bottom of $62 on August 20 due to the delta variant, prices have climbed nearly $20 to $82/Bbl (October 11).

Options markets are reflecting a new level of bullish sentiment

The options market seems to agree with the more bullish forecasts. Historically, the crude options market has skewed more towards put options, which implies that traders believe that a downward move in price is more probable than an upside move.

The chart below shows the option skew for the rolling 2nd-month WTI contract vs. the prompt-month WTI price. Last week, for the first time since October 2019, the second-month contract displayed call skew (shown by navy blue line eclipsing zero). 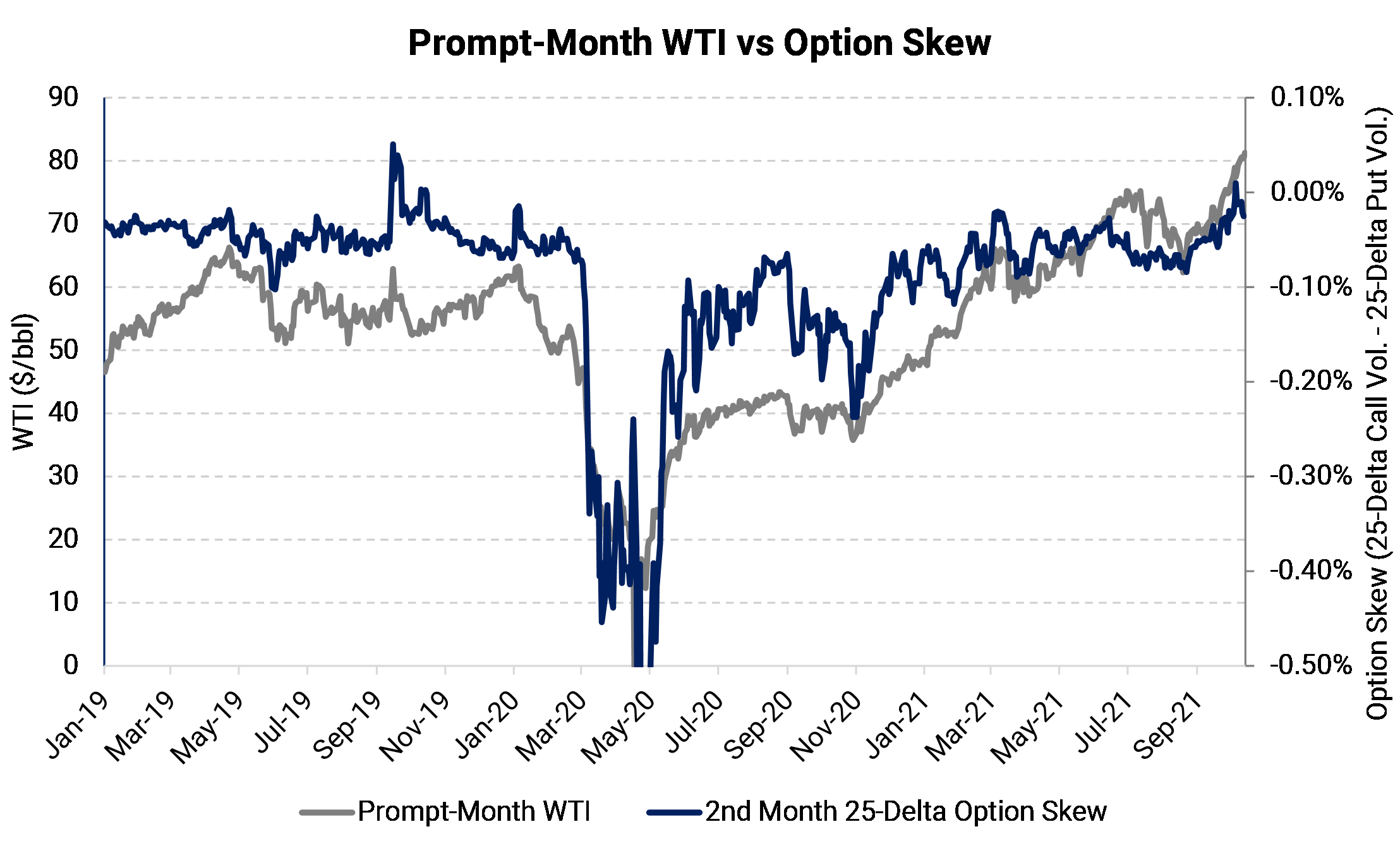 In addition, a strong rally in global natural gas prices has further added to the bullish sentiment surrounding crude prices. Thanks to surging prices in Europe and Asia, power plants have begun to switch from natural gas to fuel oils to produce electricity. Just last week, Aramco CEO Amin Nasser says that crude consumption has increased by an estimated 500 MBbl/d, primarily due to gas-to-oil switching in specific markets in Asia. The chart below shows power generation economics by fuel type for the U.S., Asia, and European Union. 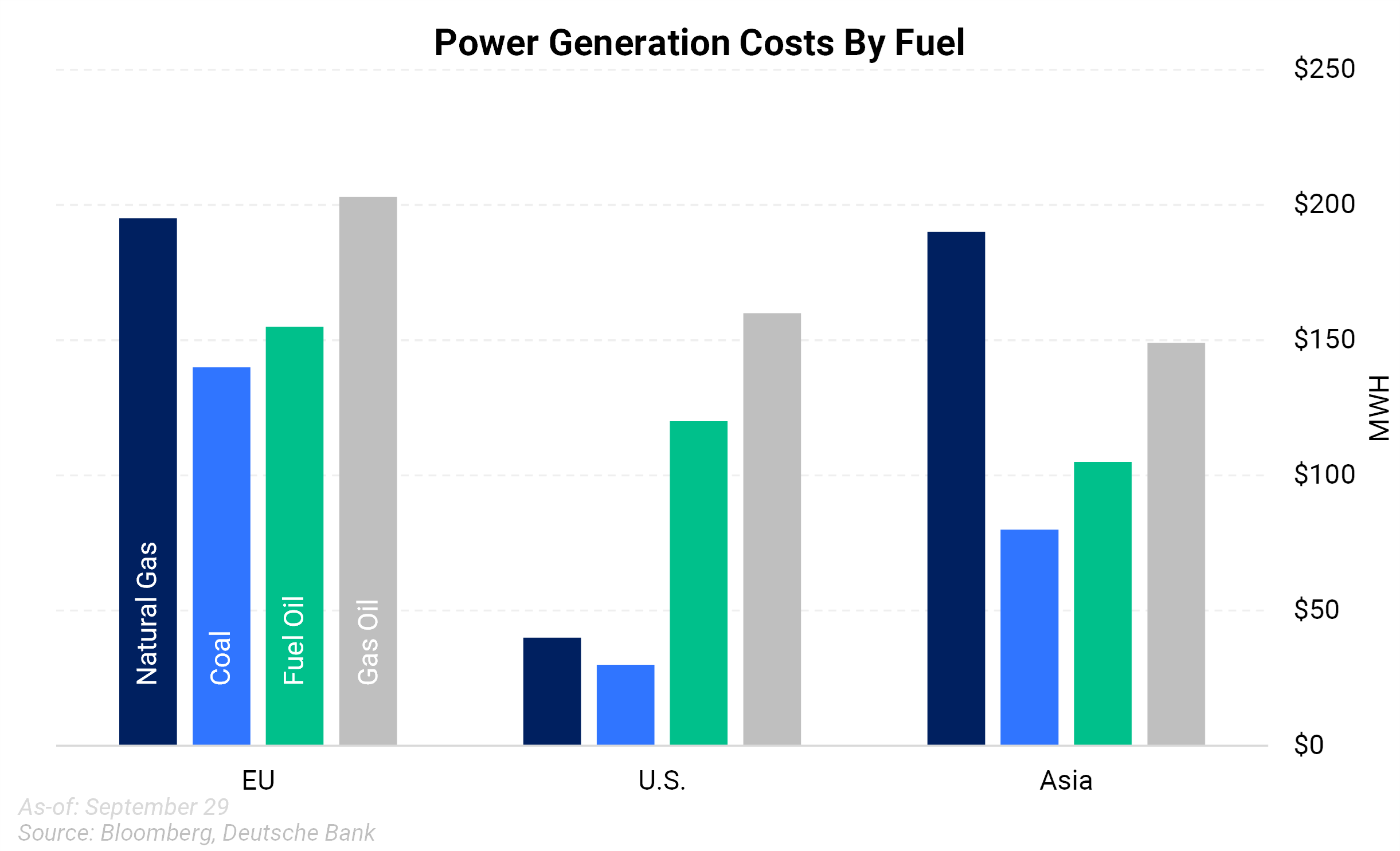 Even more impressive, crude has rallied despite weakening macro data coming out of the U.S., which in normal times would imply that demand growth may not be as robust. Over the past two months, the U.S. Bureau of Labor Statistics has released a pair of bearish job reports, well below where analysts were expecting. The USD has weakened, which may have offset the macro concerns; still, if energy prices continue to surge, economic growth may be stymied.

OPEC+ is producing less than it announced it would

A few months ago, we would have refuted this bullish outlook citing plentiful OPEC+ capacity as a potential buffer for prices. However, recent data suggests that the group may be overstating spare capacity, adding another bullish catalyst to crude prices. Intuitively, the group would overstate capacity as it has both the incentive and ability to do so. After years of political instability, lack of investment, and U.S. sanctions, the group may have lost some of its heavily-touted spare capacity. The chart below shows the difference between each country's actual production and their respective quota under the current accord. 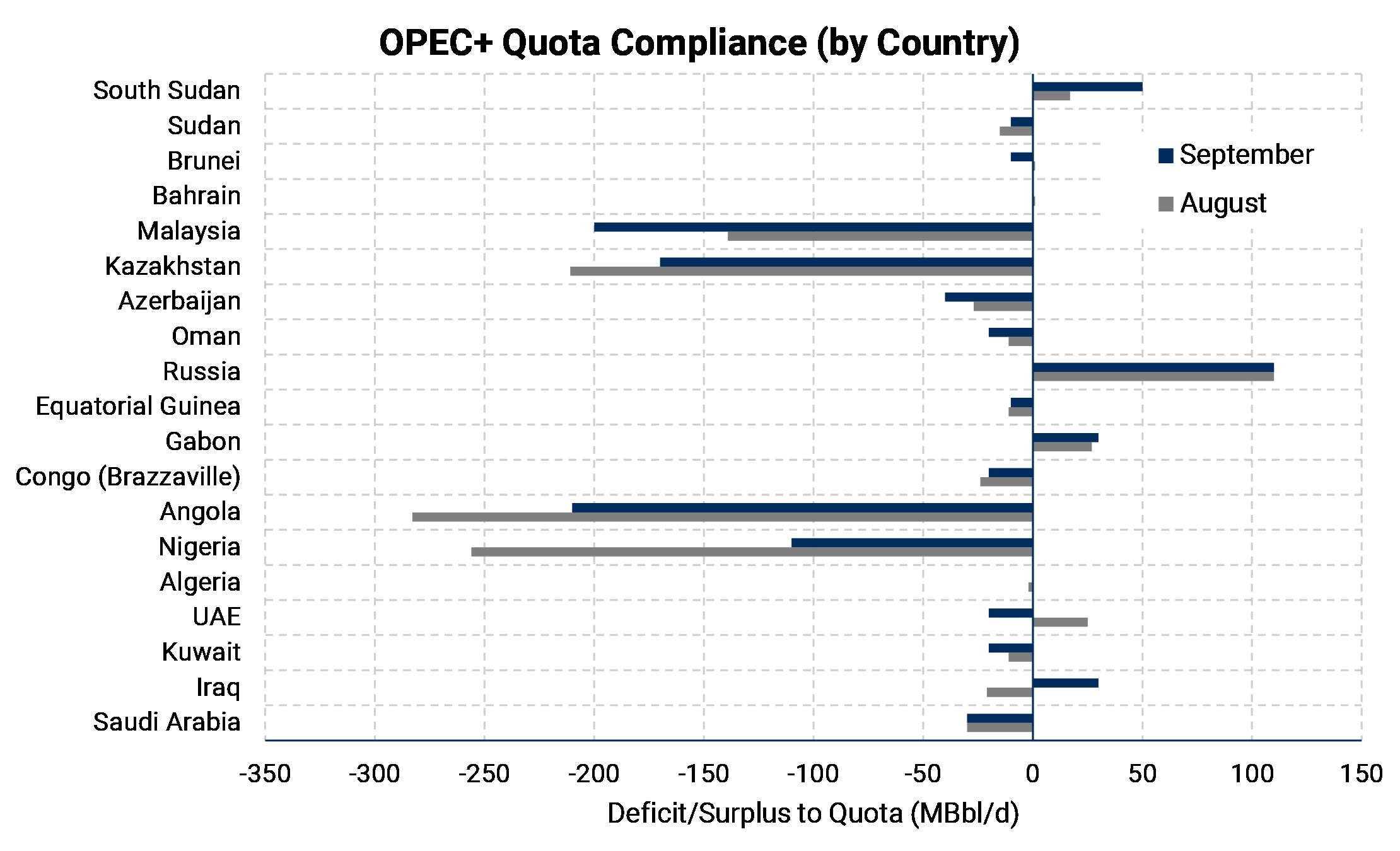 According to Argus, the cartel produced 650 MBbl/d less than their allocations for September bringing total compliance to 115%. This has exacerbated the recent market tightness observed in crude markets. Further, global demand has recovered much quicker than initially expected. With prices at $80+/Bbl and pressure from the U.S., India, and other consumers to increase production, it begs the question: what are they waiting for?

On the other side of the globe, U.S. production has not responded to higher prices, as public companies have titled their strategy to focus on capital returns rather than growth. In addition, investors have been slow to back fossil-fuel companies thanks to growing ESG concerns and the lack of investment shows in production/drilling data. Private producers have been deploying rigs, while most U.S. public producers have been on the sidelines. Perhaps higher oil prices could draw capital toward public E&P's, but only time will tell, and meaningful production growth will likely be limited without them.

The combination of limited production growth and recovering demand bodes well for oil prices. If demand continues to recover at its current trajectory and OPEC does not have spare capacity, prices would need to move higher to incentivize U.S. and non-OPEC production growth. The recent surge in gas prices and other commodities further adds to our bullish outlook. It is too early to call this a structural bull cycle, but the fundamentals remain tight, and this tightness looks like it's here to stay.