The U.S. interest rate markets, and thus the currency markets, are reacting to the events last night with the Georgian Senatorial elections. Rates are climbing on the expectations of a much more overall liberal fiscal policy, including more economic stimulus than what has recently been passed, requiring a chain of fiscal and monetary events that can create inflation, send interest rates higher, and devalue the U.S. dollar. Fortunately, higher rates and a weaker dollar can be hedged now, if done carefully and strategically.

With the Georgian Senatorial races leaving little doubt that both Democrats will have won, after all the votes are counted and recounted, the markets are reacting to their expectations of what this "blue wave" indicates, with the bellwether ten-year U.S. Treasury yield breaking its 0.98% resistance level and breaching the psychologically important 1.00% big figure mark. This move suggests a further break higher, targeting the 1.15% to 1.20% range for this yield in the more immediate future. 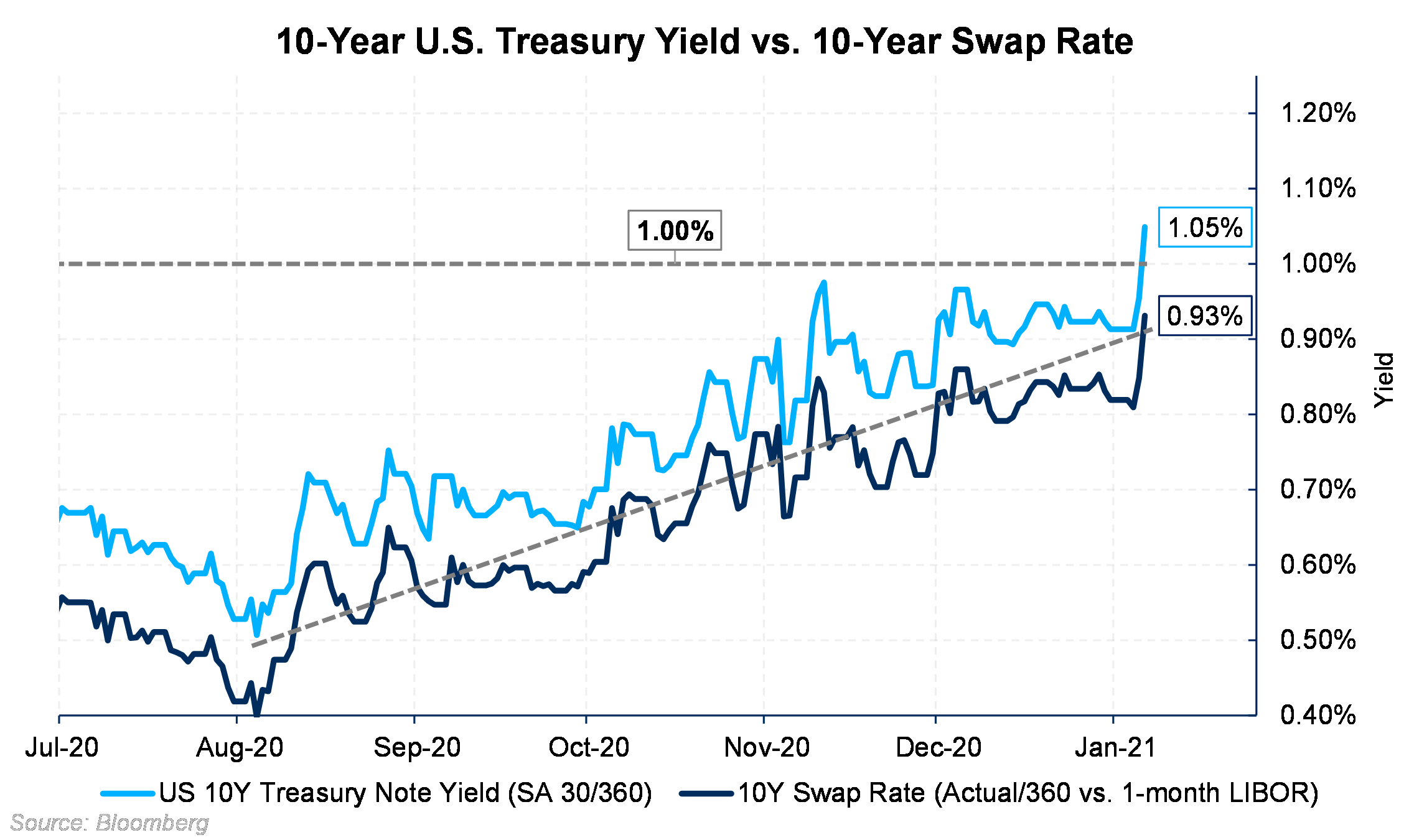 This market activity is a result of what will be a Democratically controlled Senate, along with the House and Presidency, suggesting that additional fiscal stimulus and higher than previously expected deficits are to come, soon. This will add to the record level of money supply as the Federal Reserve will have to print more to purchase the Treasury debt that will finance these even higher deficits. Higher interest rates and expense are a logical outcome

Even if desired, additional Fed action may not be able to completely stop medium- and longer-term rates from rising in a steepening trend if economic optimism takes hold further, despite the weight of the current COVID demise on employment (a weak non-farm payrolls and unemployment rate report is expected Friday) and the overall U.S. economy.

Treasury yields are the primary driver, nearly on a 1:1 basis, of higher interest rate swap rates where a hedger can lock in short-term interest rate exposure, such as LIBOR. While LIBOR is more pegged to the Fed's federal funds target, currently in the range of 0.00% - 0.25%, the Fed can at any time (not just at FOMC meetings) change course and move this target higher if there is proactive concern over potential higher inflation due to increased deficits, increased money supply, and/or weakness in the U.S. dollar. When this domino effect occurs, LIBOR and other short-term funding rates, such as SOFR and AMERIBOR, will move higher in lockstep, increasing floating rate debt interest expense. 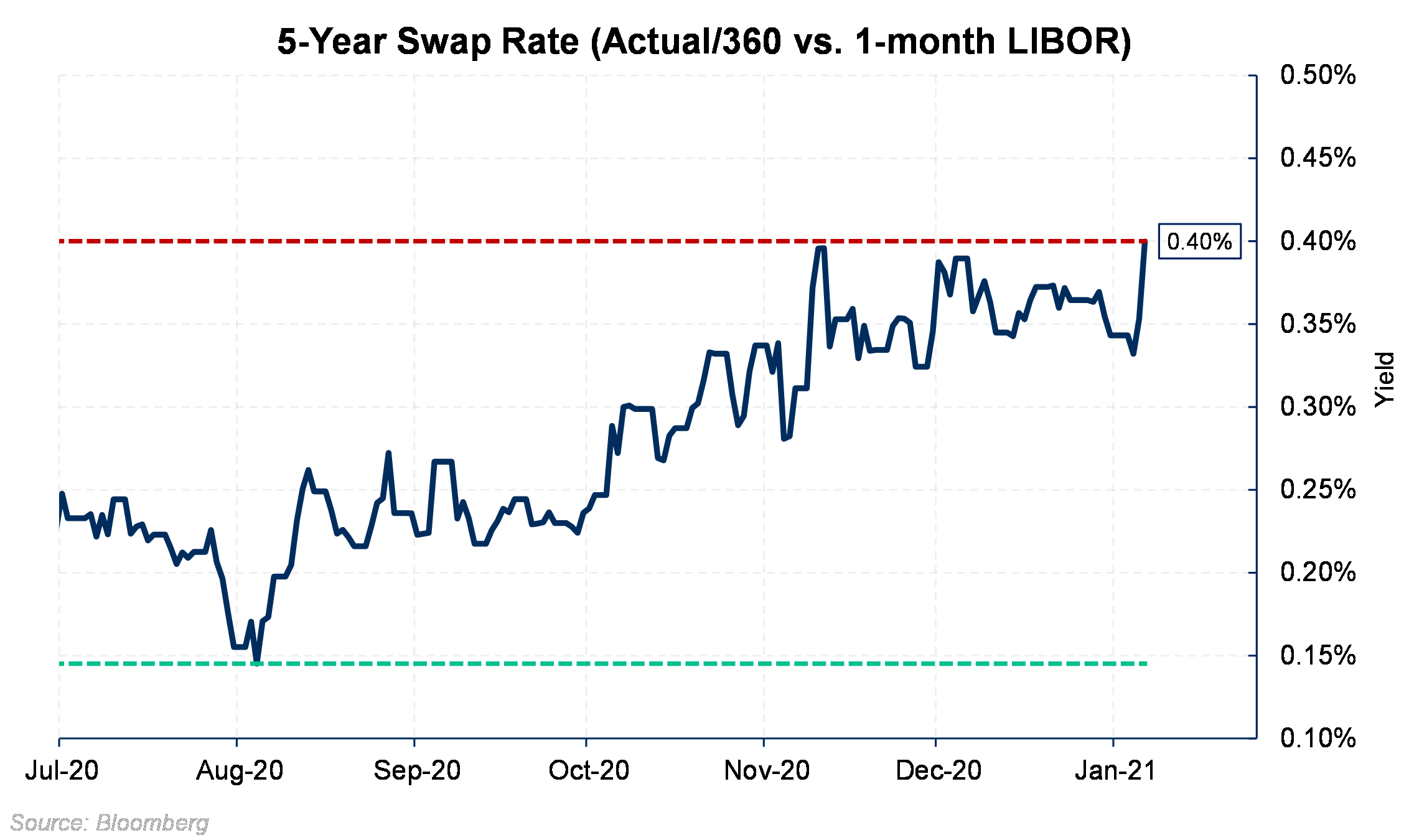 Analysts are now reactively revising their rate expectations much higher

While many economists at year-end 2020 forecasted a rising ten-year Treasury yield in the range of 1.25% to 1.50% by the end of 2021, that was predicated on the odds that the Georgian Senate races would produce at most one victory for the Democrats, still leaving the Republican majority's breaks on fiscal spending. With last night's news, many of these forecasts are now up near, or at, 2.00%, which is higher than where the ten-year Treasury yield started in 2020, prior to the pandemic. If these targets are met, the cost of hedging floating rate debt across all maturities will rise along with their counterpart Treasury yields. As displayed, the five-year swap rate (on a monthly, Actual/360 basis, like that of the one-month LIBOR basis) has risen 0.25% since its low in August and 0.07% alone since its Monday's close.

Recommendation: As a result of all of the above, AEGIS is advising those with floating rate debt to take full advantage of the opportunity that still exists in the interest rate swap and cap markets to commence, or extend, a strategic rates hedging program. AEGIS will work with you to plan and execute the optimal structures, amounts, and terms based on your specific debt profiles and needs.