As fixed income traders bet on the likelihood of a stimulus deal and a Democratic Party election sweep, the ten-year Treasury broke through key technical levels, spurring a selloff across the Treasury yield and interest rate swap curves.

The ten- and 30-year Treasury yields rose this week to their highest levels since June off the increasing hope of an agreement on the next round of fiscal stimulus, particularly given the rising speculation of a "Blue Wave" coming on November 3rd. With former Vice President Joe Biden leading the race to be the next U.S. president in opinion polls nationally and in swing states, markets are warming up to the increasing possibility of a Democrat sweep, a view that was not altered after Thursday night's debate. This growing outlook boosts the probability of a sizable stimulus package being passed even if a deal doesn't get done before the election. For bond investors, this means positive growth along with more Treasury bond issuance and bigger deficits — all that support higher permanent market rates.

Rates began their climb Tuesday after White House Chief of Staff Mark Meadows announced that the White House's goal was to get "some kind of deal" on a fiscal stimulus package "in the next 48 hours". Although this did not come to fruition, the pressure on yields continued to build through the week after House Speaker Nancy Pelosi said she was hopeful for a stimulus agreement by the week's end. For the first time in several months, a decent degree of volatility returned to the fixed income bond and swap markets which have been on pause for the past several months: 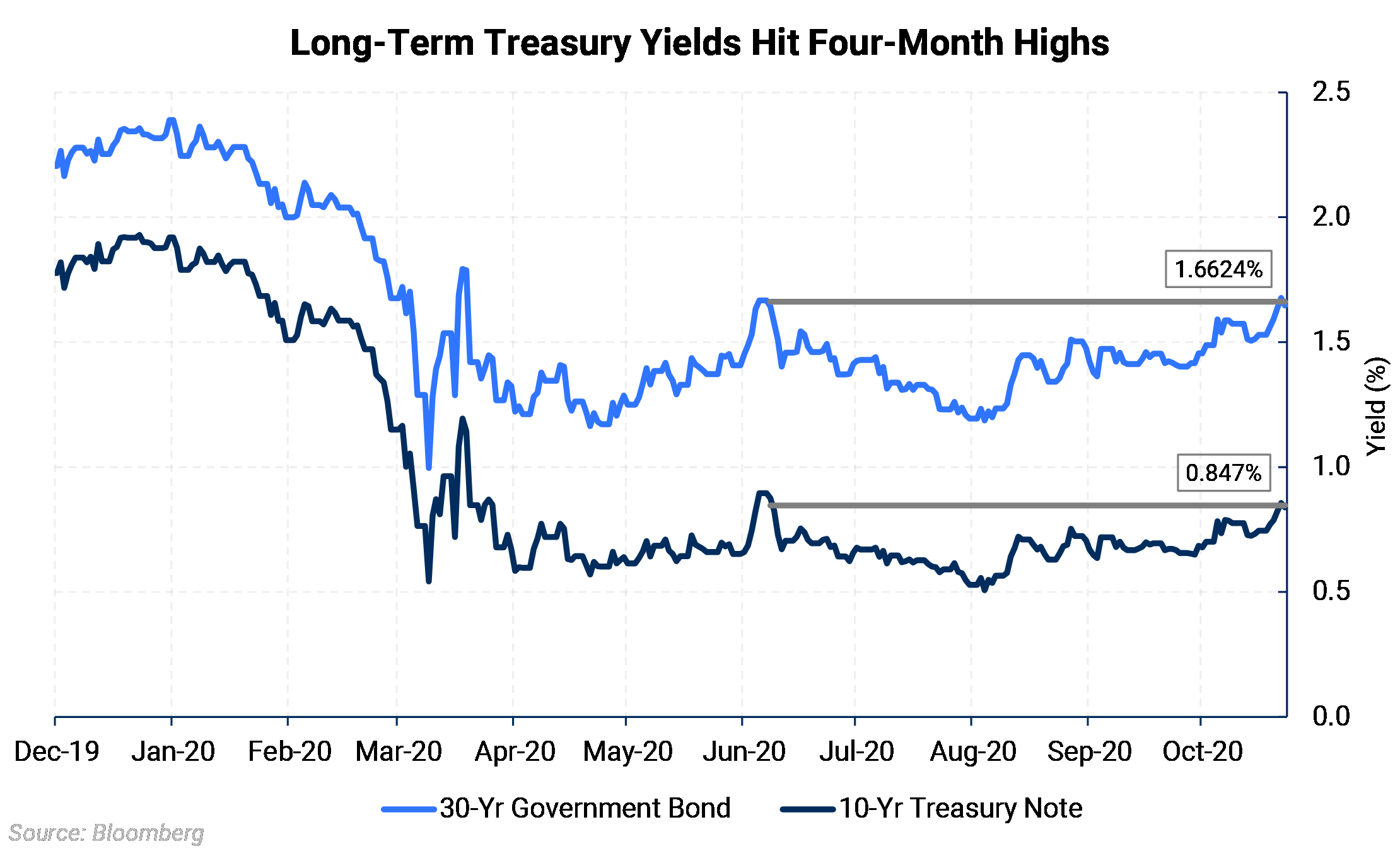 Despite the substantial absolute percentage changes in longer-term rates, shorter- and medium-term rates have seen much less significant increases, in the range of one to four basis points (0.01% to 0.04%) in the two to five year maturity sectors.

This unequal rise in rates has led the yield curve to steepen - in other words, it has widened the gap between short-term and long-term yields. Speculative wagers on longer-term Treasury yields hit a record, according to the latest data released by the Commodity Futures Trading Commission, in signs that leveraged funds are positioning for a steeper curve. These so-called "steepener trades" are often seen as bets on reflation. This can be reflected in the often observed and heavily traded futures spread between the five-year and 30-year Treasury yields, which has climbed to its highest level since 2016: 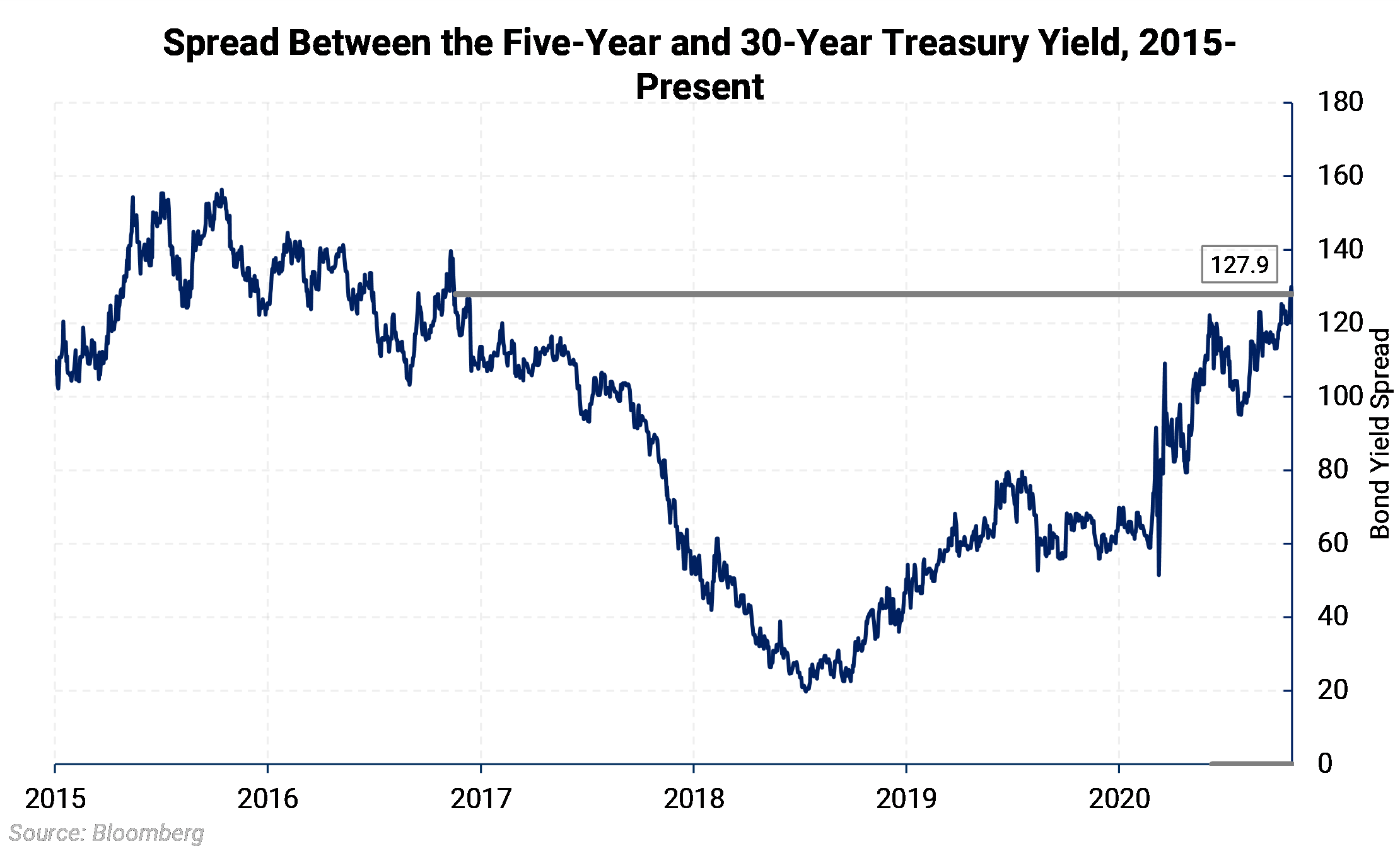 Evercore ISI, recognized as a top-ranked independent market research firm, forecasts that the ten-year Treasury yield could climb to a range of 0.90% to 1.00% if a "large fiscal package" of roughly $2.5 trillion to $3.0 trillion is passed by early next year.

Also to note, another potential driver of the increase in Treasury yields was Chicago Fed President Charles Evans's statement earlier this week that the central bank isn't eager to increase its current pace of long-term Treasury purchases.

Congressional lawmakers continue to work toward a package to bolster the economy. Speaker Pelosi signaled optimism on a deal with Treasury Secretary Steven Mnuchin, while opposition remains in the Republican-controlled Senate, making a pact before the election less likely. "We continue to be engaged in negotiations, and I am hopeful we will be able to reach an agreement," Pelosi said at a news conference Thursday, but she pointed to Senate Majority Leader Mitch McConnell's publicly expressed opposition to the spending levels under discussion.

Senate Republicans may become the ultimate roadblock to enacting a roughly $2 trillion stimulus deal being negotiated by Pelosi and Mnuchin. McConnell has made no promises on when the Senate might take up any compromise agreement, and some senior GOP lawmakers expressed skepticism whether the chamber would vote on one, even after the election. Republican vote counters in the Senate won't have the 13 votes needed to pass a stimulus package as large as Pelosi and Mnuchin are seeking, according to South Dakota's Senator John Thune, the Republican party's number two leader in the Senate.

The resistance among Senate Republicans to the near $2 trillion package under negotiation has spurred some House Democrats to oppose the idea of a pre-election vote on any bill, as well. Pelosi told members of the House's Democratic leadership that some of the party's lawmakers have told her they don't want to come back to the Capitol for a vote before the November 3rd election if the Senate isn't ready to act.

Pelosi said she and Mnuchin were nearing agreement on how to allocate money for testing and tracing to safely reopen schools and the economy, a key aspect in the talks. She said they still haven't settled three of the main sticking points: Democrats' demands for aid to state and local governments, school funding, and Republican insistence on a liability shield for employers.

This week saw reports on new housing starts, building permits, and existing homes sales, all continuing to reflect strength and growth. The housing market is being driven by three factors: record-low mortgage rates, a low inventory of existing housing inventory, and a migration to the suburbs and low-density areas as Americans seek more room for home offices and schooling. Housing is a long leading indicator, forecasting the direction of the overall economy one-year or more in advance.

The housing sector has been among the strongest in the economy, along with the stock market, defying the effects of COVID-19 and actually benefiting from it, while Americans consumers have shifted their spending habits away from travel, leisure, and entertainment. Many of those activities are no longer available or are less desirable amid concern over personal health concerns, helping to steer consumers more toward housing.

U.S. single-family homebuilding surged in September, reinforcing the housing market's status as a positive standout of the economic recovery. Housing starts increased 1.9% to a seasonally adjusted annual rate of 1.415 million units last month, the Commerce Department said. Single-family homebuilding, the largest share of the housing market, jumped 8.5% to a rate of 1.108 million units last month. But starts for the volatile multi-family housing segment fell 16.3% to a pace of only 307,000 units. Groundbreaking activity rose in the West, South, and Northeast, but fell in the Midwest.

Annual growth of single-family home prices has risen "by more in the last three months than in any previously recorded period dating back to 1969," said Matthew Speakman, economist for the online home seller Zillow. "This torrid growth in sales may ultimately be done in by an inventory crunch that's only getting worse — it's hard to keep setting sales records when there's so little for sale — forcing a slowdown in transactions in the coming months. But with demand for housing as high as it is, it's unlikely that a slowdown in sales will be substantial."

A survey on Monday showed confidence among single-family homebuilders increased to a record high in October. Builders, however, said constructing affordable homes was becoming increasingly challenging because of shortages of lots, labor, lumber, and other key building materials are lengthening construction times and costs.

The rate of existing home sales continued its sweltering pace in September, rising 9.4% from August and nearly 21% year-over-year. Prices, meanwhile, continued to climb, reaching a median of $311,800, up 14.8% from a year ago. Sales and prices rose in all regions of the country, although sales were strongest in the Northeast.

As the summer ends and autumn sets in, the housing market tends to cool off with the weather. But this year, that trend has been upended.

New weekly filings for jobless claims in the U.S. totaled 787,000 last week, nearly the lowest total since the early days of the pandemic. Economists surveyed had been expecting 875,000 claims for the week ended October 17th.

This most recent level was the lowest total since October 3rd and their second-lowest mark since March 14th, just before an avalanche of layoffs that followed shutdown efforts to combat the coronavirus pandemic. This total reflected a decline of 55,000 from the downwardly revised 842,000 claims in the previous week.

One reason for the decline in weekly jobless claims has been the migration of workers who have exhausted their regular state program benefits and have moved to the Pandemic Emergency Unemployment Compensation ("PEUC") program. That total increased by 509,828 for the week ended October 3rd to 3.3 million. Recipients under this program get an extra 13 weeks of compensation after exhausting the typical state eligibility of 26 weeks.

In total, 25.3 million people are on the various unemployment benefits programs, disproportionately affecting low-wage workers, who are typically younger, ethnic, and renters. Despite the continuing fall in claims, the decline, even allowing for the PEUC/extended benefits effect, does not map one-to-one in rising payrolls. Some people no longer claiming benefits may have taken non-payroll gigs or freelance jobs, while others may have dropped out of the labor force permanently, which is a chief concern for the Federal Reserve and a poor sign for future economic growth.