U.S. interest rates and equities edged lower at the close of the week after stock indices closed at all-time highs Wednesday and Thursday. The relief over a peaceful transition of power on Tuesday's Inauguration Day and the enthusiasm for the American Rescue Plan proposed by the newly sworn in President Joseph Biden turned somber as investors grew anxious at the week's end that the coronavirus pandemic will hamper growth for longer than expected and that Democrats may struggle to get a nearly $2 trillion spending bill through a dubious and growingly distracted Congress. 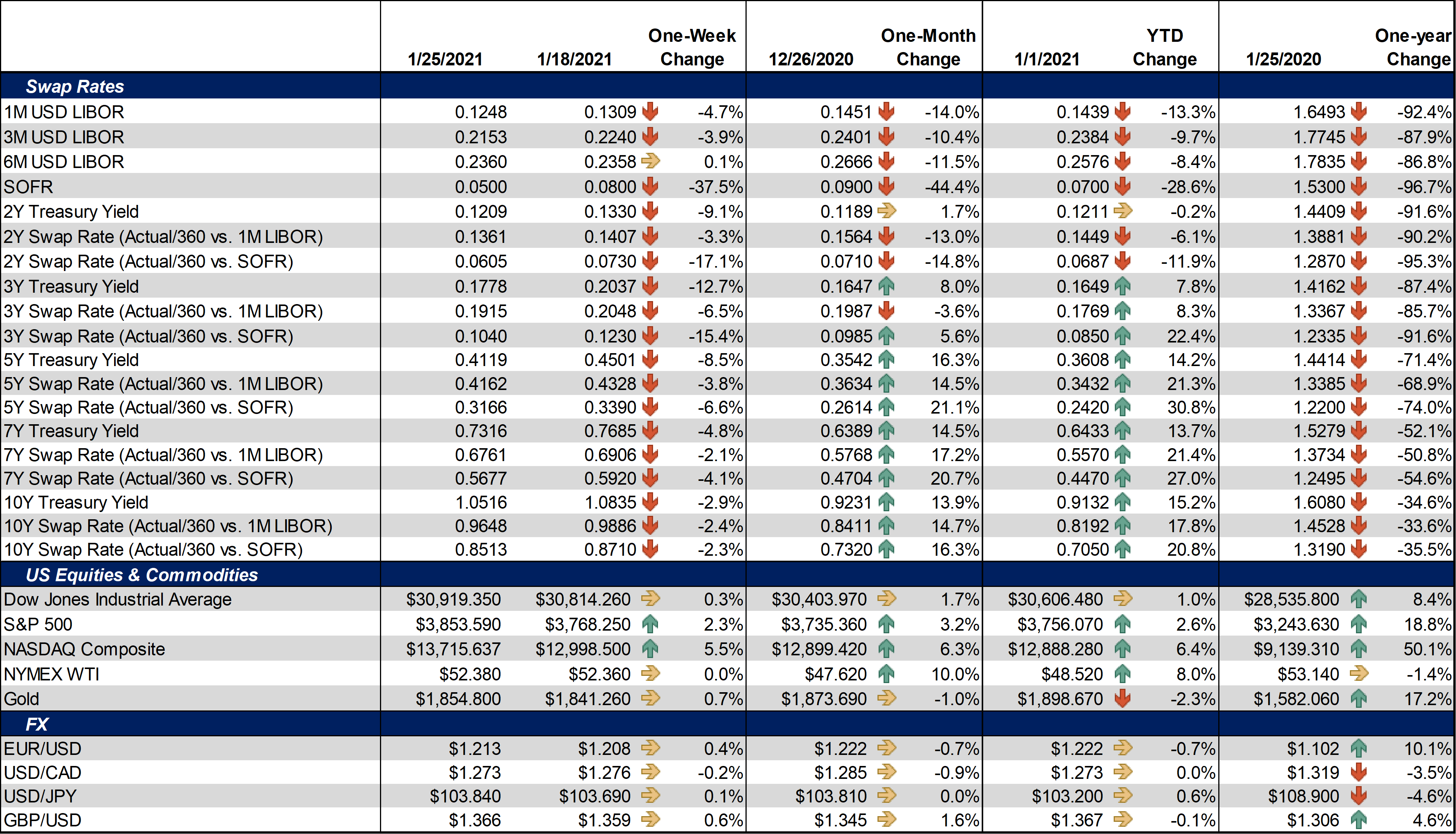 The S&P 500 Index fell for the first time in the four-day week after reaching a record intraday high Thursday of 3,861, with losses widening Friday on reports that the new virus strain may be deadlier than first reported. Treasury yields traded within a narrow range for the week, with the bellwether ten-year Treasury yield bouncing between 1.08% and 1.12%, closing the week near this lower bound. President Biden warned the nation to prepare for its darkest days in the yearlong pandemic, predicting that as many as 100,000 more Americans will die over the next month as he and his new administration overhaul the federal coronavirus response and presses Congress for swift approval for more aid.

But Biden's plea for the nation to assume a "wartime" footing did not immediately sway an increasingly unconvinced Congress, where Republican opposition to the $1.9 trillion pandemic relief plan only hardened. Even some Democrats made clear they would not rubber-stamp the new president's approach. Highlighting the enormous stakes for his presidency, Biden unveiled the new administration's 200-page blueprint for battling the pandemic on Thursday, his first full day in office.

That package faces challenges in Congress after moderate Republicans this week said they saw no need to rush on another big spending bill after last month's $900 billion effort. Republican Senator Susan Collins of Maine on Thursday became the latest to express opposition to the idea of a big new package, aligning with fellow Republican Senators Mitt Romney of Utah and Lisa Murkowski of Alaska, while Republican Senator of Missouri Roy Blunt, a member of GOP leadership, called the top line number a "non-starter."

Moderate Republicans such as Collins, Romney, and Murkowski, along with maintaining the vote of moderate Democrat Joe Manchin of West Virginia, are seen as the best chance for Democrats to build a bipartisan Senate coalition to get this and several future politically contentious bills aimed at longer-term targets like infrastructure and climate change passed over the next few months in a 50-50 Senate.

Democrats, meanwhile, are discussing making an end-run around Republicans via the budget reconciliation process. That process could eliminate the need for Republican support in the Senate by lowering the threshold for passage to a simple majority. Biden, along with Vice President Kamala Harris, Deese, and other administration officials are planning meetings with lawmakers from both sides of the aisle in coming days. Biden has made it clear his preference would be a bipartisan bill and will exhaust all efforts to attain this before resorting to alternative measures in order to get his large fiscal relief plan approved.

These efforts will certainly be hindered by Democrat Senate Majority Leader Chuck Schumer's announcement Friday that Democrat House Majority Leader Nancy Pelosi will deliver the House's second and latest article of impeachment of former President Donald Trump to the Senate on Monday. Once the article is transmitted, this will commence a Senate trial with notices sent and briefs requested of the two sides. The risk here by Democrats is that, although its commencement is under negotiation, this mandatory Senate impeachment trial will potentially take up valuable Senate time and effort away from Biden's cabinet confirmations as well as his COVID-19 crisis spending package.

Weekly initial jobless claims fall, but barely, at under 1 million

The better part of a year after the pandemic hit the U.S., weekly filings for unemployment claims in regular state programs are still running at 900,000, more than quadruple the pre-virus level. About 5.05 million people were receiving claiming the benefits as of January 9th, according to the Labor Department this week, with an additional 5.7 million claimed under the Pandemic Unemployment Assistance program for the self-employed and gig workers. Some unemployment benefits, including the assistance for gig workers, are set to expire on March 14th, underscoring the Biden administration's desire for congressional action on the stimulus package sooner rather than later.

The president is asking the Labor Department to issue guidance clarifying that workers can refuse employment that jeopardizes their health and still receive unemployment benefits. That could help service-industry and factory workers worried about the spread of the coronavirus at their job to stay home from work.

Biden will also ask the Department of Agriculture to issue new guidance that would allow as many as 12 million additional Americans to have access to food-stamp benefits that were enhanced during the pandemic. The president will also ask the department to make it easier for families to access a program providing benefits to children who would normally qualify for free school lunches and increase the benefit by 15%.

And Biden will request that the Treasury Department create new online tools to help the estimated eight million Americans who have not yet received the coronavirus stimulus checks to which they are entitled.

The return of Dr. Fauci at the helm as the pandemic shows sign of temporarily plateauing

In a sign of the sharp reversal of course in handling an outbreak that has now killed more than 400,000 Americans, the Biden team returned Dr. Anthony Fauci, one of the world's best-known infectious disease experts, back to center stage.

In addition, Biden signed a series of executive orders that would impose testing and mask requirements for travelers, produce federal guidance to reopen schools, and bolster domestic manufacturing of supplies to combat the virus. He was flanked by a new team of scientists and doctors, including Fauci, who he said would help the U.S. response from here on out. Biden pleaded for Americans to wear masks, saying the simple precaution could save 50,000 lives through April. "The fact is, it is the single best thing we can do - more important than the vaccines," he said, before lamenting that face-coverings had become a political issue.

While deaths from COVID-19 continue to mount, including 4,400 on Wednesday alone, the second-most ever in a single day, Fauci said there are signs the U.S. outbreak may have again plateaued. Case numbers and hospitalizations have declined from record highs in the past week. But he added that the administration is concerned about new strains of the virus, particularly in South Africa and Brazil, that appear more transmissible and resistant to treatment and may even be less susceptible to current vaccines.

In a strong sign of respect and support, the most recent Federal Reserve Chairwoman, Janet Yellen, was unanimously approved by the Senate Finance Committee Friday as the new Treasury Secretary, likely making her the nation's first female to hold this position as early as Monday after a full Senate confirmation vote.

During her virtual Senate confirmation hearing, Yellen was asked about her view on longer-term U.S. Treasury debt, including adding an "ultra-long" 50-year Treasury bond funding, and perhaps even a 100-year bond, to the current maturity mix. Yellen provided fodder to fixed income traders that there is a chance the U.S. will finally expand maturities in the world's biggest bond market beyond 30 years by replying that "there is an advantage to funding the debt, especially when interest rates are very low, by issuing long-term debt, and I would be very pleased to look at this issue and examine what the market would be like for bonds of this maturity."

The current Treasury secretary, Steven Mnuchin, pushed hard during the early part of his tenure for issuing 50- or 100-year bonds to lock in historically low rates. But he and his debt managers never followed through, in large part because bond dealers and the Treasury Borrowing Advisory Committee were skeptical there would be enough demand to sustain periodic auctions. The Treasury Department instead rebooted issuance of 20-year bonds in 2020, part of an effort to lock in low rates and fund a federal deficit that ballooned under fresh tax cuts and pandemic-related spending.

The U.K, Canada, and Italy have sold 50-year bonds in recent years, while 100-year debt has been issued in a few countries, including Belgium and Mexico.

Any sale of 50-year and possibly 100-year debt would likely raise 10-year, 20-year, and 30-year Treasury yields as these ultra-long issuances would divert the limited universe of bond investor demand for this new debt.