Natural gas prices have reached multi-year highs across many of the near-term strips. It is an excellent opportunity for a producer to add hedges if there are gaps in the portfolio. There are a few reasons why prices have become so elevated, but none more impactful than the drop in oil prices.

The November gas contract has now traded above $3.00/MMBtu as of Wednesday, October 21. It was the highest daily settle for the contract since 2016. Yet, the prompt-month contract isn't alone in setting new multi-year highs. Natural gas Winter 2020-2021, Summer 2021, and Winter 2021-2022 have all hit their highest mark in four years. The rally in the forward curve drops substantially for "red" summer (2022) as that strip has barely reached $2.50.

The chart below shows an almost V-shaped rally for forward-looking gas seasonal strips coinciding with the drop in oil prices caused by COVID-19 demand destruction. The two charts are identical, except one provides a one-year window and the other a four-year lookback.

AEGIS has seen much more producer hedging action as the aforementioned seasonal strips have reached very attractive price levels. Even if you are a client that is highly hedged already, there are potential adjustments to the book that can be made when rapid price movements like this happen. Clients: please reach out to engage@aegis-hedging.com if you would like to discuss.

The table below shows the November contract plus the next four gas seasons. Note the sharp rally in the past month and that each contract and strip sit at their 52-week highs.

Focusing on Production, LNG, and Weather 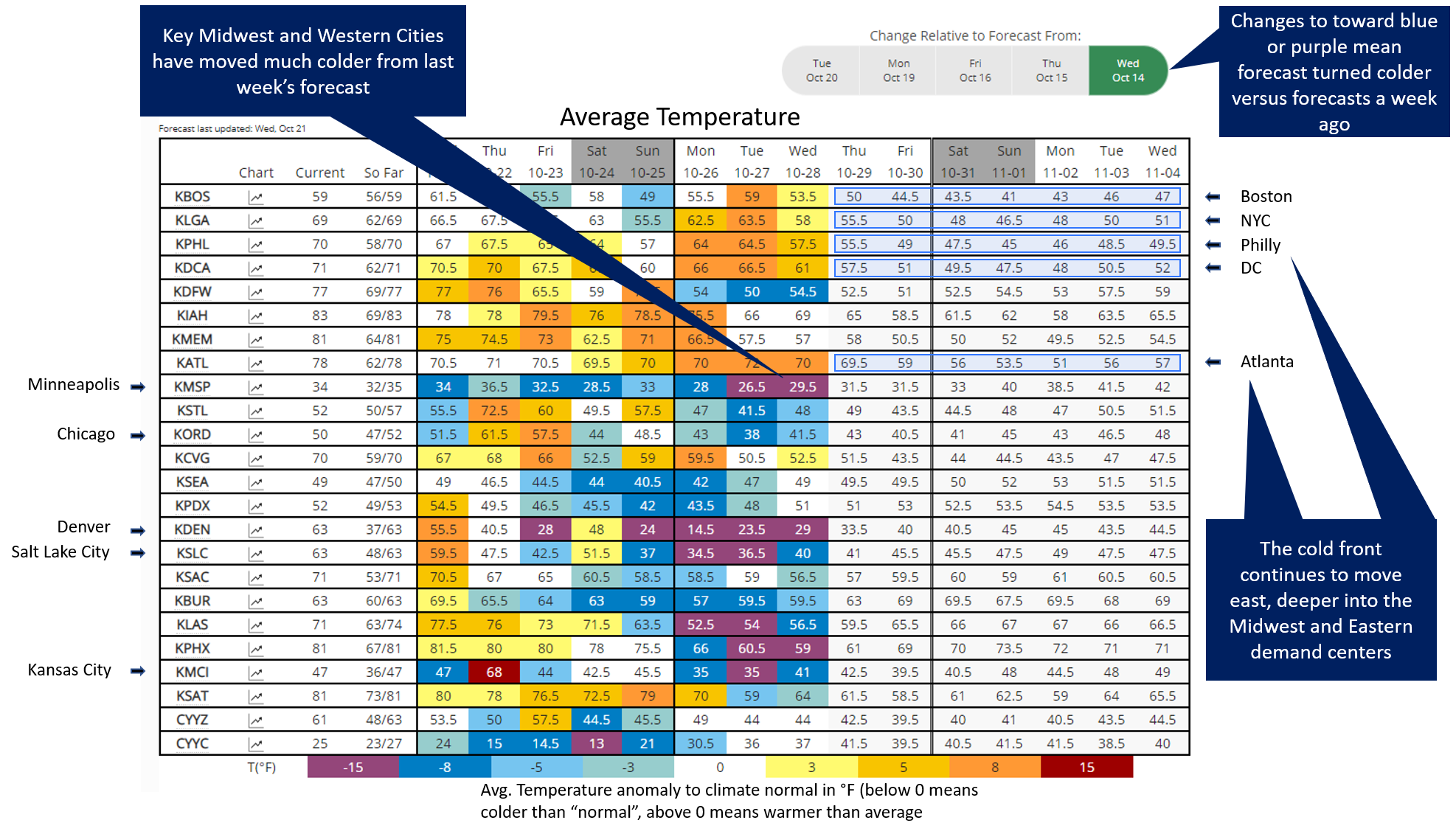 A cooling weather forecast has been a catalyst for the more near-term gas contracts. November gas has rallied, in part, due to colder-than-normal temperatures expected early in the month.

The weather forecast progression on the right shows the average temperature for major U.S. cities with data provided by Commodity Weather Group (CWG). The graphic represents changes from "normal" to the average temperature from a week ago. For example, Minneapolis (weather station KMSP) has seen a 15°F move colder for Oct. 27-28 from last week's forecast. A cold front is sweeping across parts of the West and Midwest from Canada, moving eastward. The blue highlighted areas show temperatures dropping in major eastern seaboard cities as the front moves east.

These weather patterns are very near-term and, therefore mostly influence cash markets and front-month contracts. We do caution that overall winter weather has the potential to be warm and could undermine the current price rally in gas.