By close on Thursday, the January 2021 contract had given up a total of 66c in the last month, ending at $2.53 (preliminary close, not settle). On the day, the loss was 24c, or around one-third of the total monthly decline.

The primary driver was mild weather across the demand centers in the U.S., which we address in this article.

However, the curve, in the last day, has shown losses much farther out. For example, through yesterday, the Winter 2021-2022 strip had given up 18c since a month ago. Today, the total loss accelerated, so it was down another 15c. Next winter closed at just $2.83.

Let's explore why this recent weakness got worse, and what it means for the rest of winter and the next two seasons. 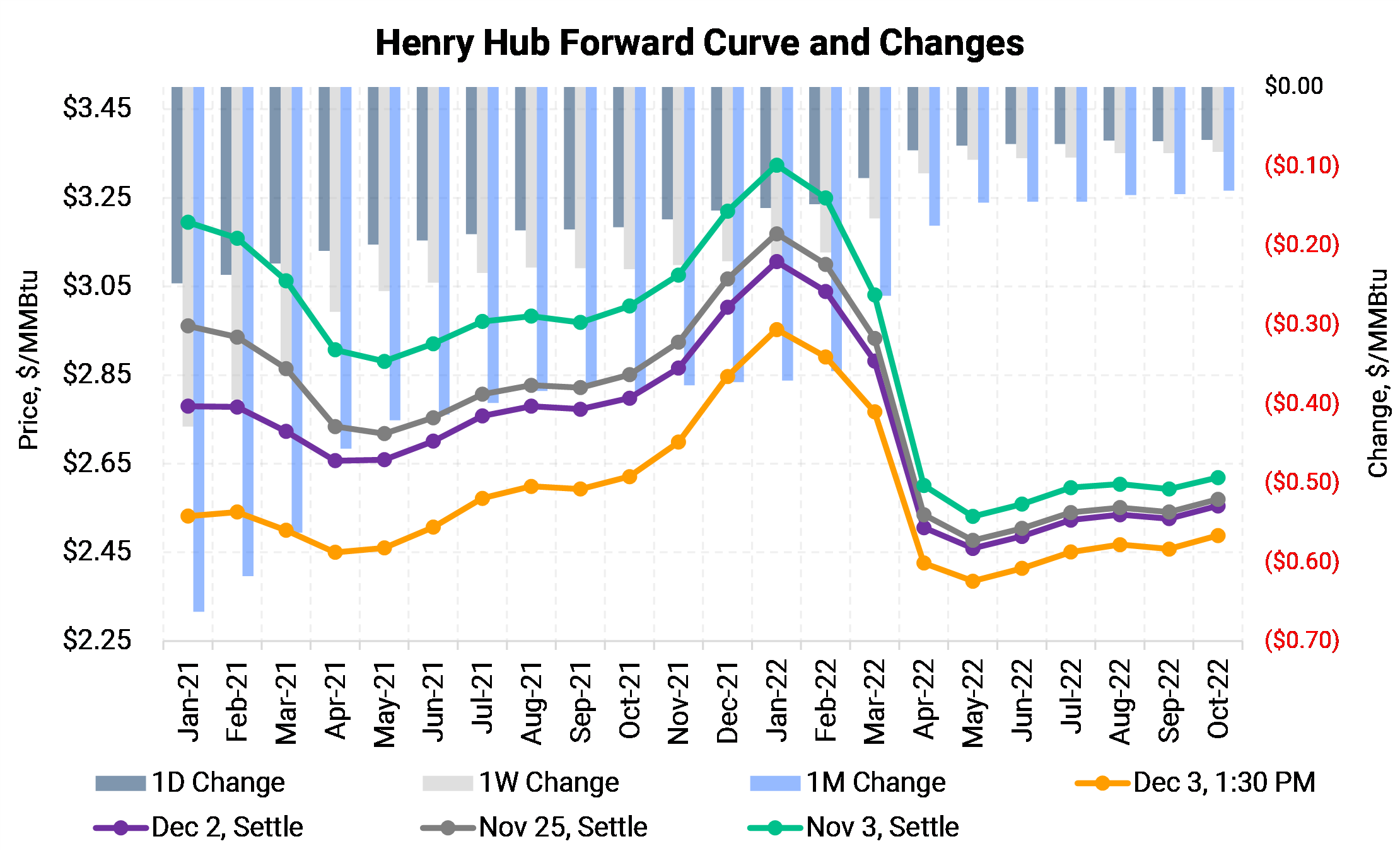 The closer we creep to peak winter without widespread cold weather, the less chance there is for late-winter scarcity of natural gas.

Total gas storage was slightly elevated going into November this year, so there was a buffer of supply that could mitigate early-winter cold. Under "normal" weather conditions, that buffer would be eradicated by March.

However, total demand losses from a mild November and December (to date, not including forecasts) have taken out near 250 Bcf of demand. That's gas that can stay in underground storage for later use.

And the more days that pass, there are fewer chances for the weather to turn cold for a long period. Therefore, there is not just more gas in storage; there is also less threat of drawing down that storage to scarcity levels.

The role of speculators

Today's sell-off looks more severe than fundamentals could alone explain. Our evidence? The aforementioned weakness in next winter. When the whole curve sells off, it is being sold by someone. AEGIS gas-weighted clients, as a whole, were not unusually active, so we will conclude that hedgers are less likely the culprit.

However, speculators had been building a "long" portfolio for the last several months, buying up futures contracts and options to bet on a bullish outcome. As prices fall, those long portfolios are losing cash money on a daily basis. They can't tolerate continued mark-to-market losses, margin calls, or hits to their VAR trading budgets.

We expect in a few weeks we'll see evidence in U.S. regulator data that the speculators were active today.

Our point of view now

As we have said before, weather can ruin an otherwise constructive supply-demand outlook. That is what has happened in the last six weeks. We still conclude that supply is too low, and demand is too high, for gas prices to stay low in 2021 if weather is somewhere near normal.

We are still bullish, but we must be realistic about the rest of winter. Temperatures could flip to cold for the end of December and the rest of winter. But if it's closer to "normal," then we shouldn't expect fireworks in gas prices. The potential for huge price spikes is passing.

However, the supply-demand balance still looks undersupplied, taking away weather impacts. The market should become aware of it during 2021, and we do not think a 12-month nearby strip at $2.58 reflects that outcome at all.