The recovery in the U.S. labor market disappointed for a second straight month in January with only modest job growth, highlighting the persistently difficult prospects for millions of unemployed and supporting demands and market expectations for more stimulus spending. Nonfarm payrolls increased by just 49,000, off from market expectations of a 105,000 increase, and after a downwardly revised 227,000 December decrease, according to the Labor Department report Friday. Although the unemployment rate fell to 6.3%, seemingly stronger than the market forecast of 6.7%, this measure was greatly influenced by a continued number of Americans leaving the workforce, helping to make this unemployment figure appear sturdier than the data behind it.

With this January data strengthening the case for another sizeable pandemic relief package, which is looking more likely to be the $1.9 trillion package proposed by President Joe Biden, both the equities markets and the interest rate markets saw increases during the week, capped off with Friday's nonfarm payroll and unemployment report. Equities rose by roughly 4.8% across the broad indices for the week, while the ten-year U.S. Treasury yield made a consistent daily climb during the trading week from 1.05% to 1.16%, nearing its recent high of over 1.18%. The U.S. dollar slid by 0.7% over the week. 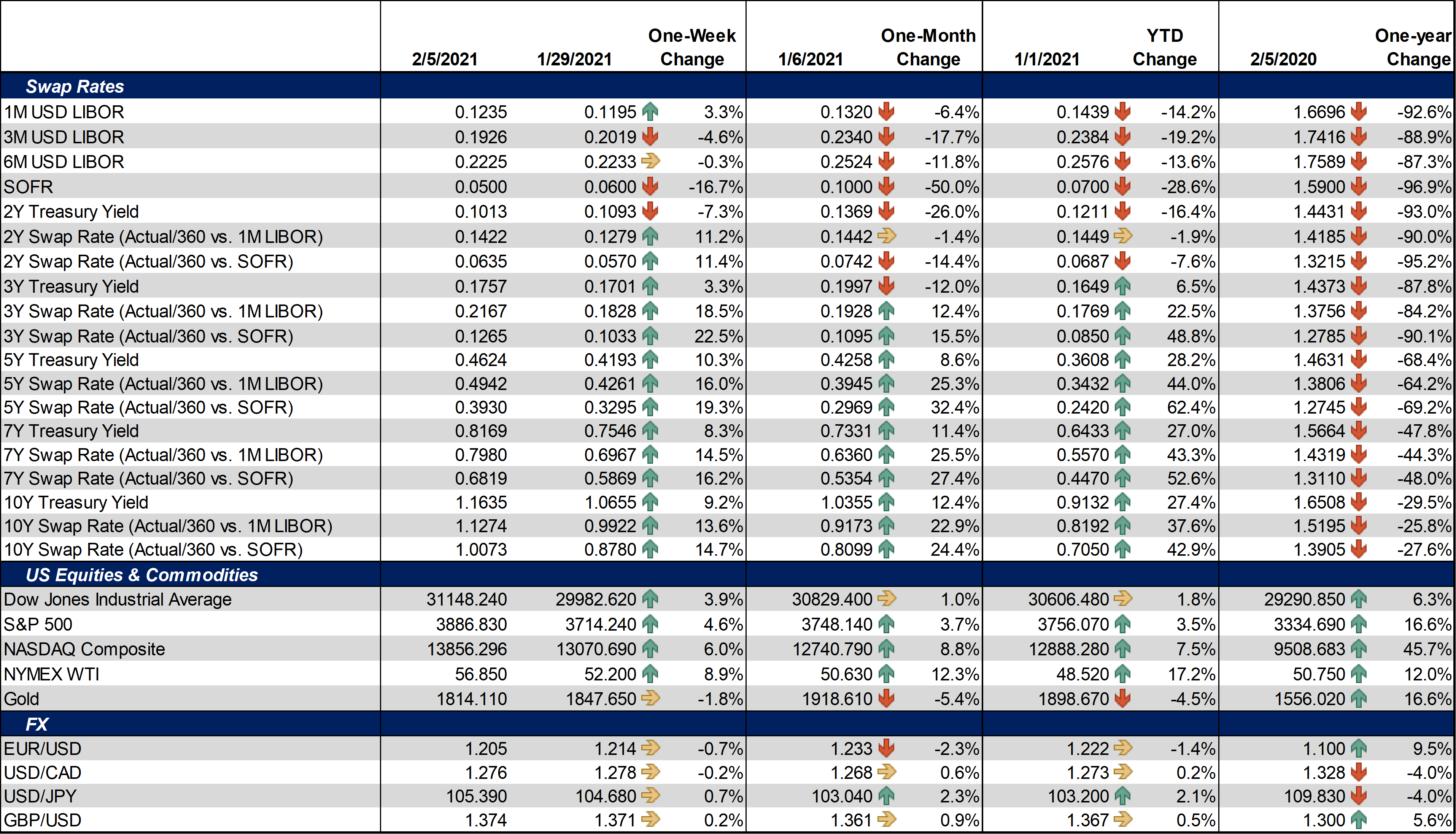 Market expectations for the full $1.9 trillion relief package were bolstered over the past several trading days as Congressional Democrats began initial moves to pass this complete package through the reconciliation process, which will ultimately only require 51 votes in the Senate, which Democrats should have if they keep all 50 Democrat senators onboard, including the right-leaning, more fiscally conservative senator from West Virginia, Senator Joe Manchin, along with Vice President Kamala Harris's tie-breaking 51st vote.

While a small number of Republicans who met with Biden in a bipartisan effort at the White House proposed a much smaller relief package, most Republicans prefer to hold off on any further assistance and wait for the December $900 billion aid package to filter through the economy before adding more to the U.S. deficit and total national debt.

Almost 40% of the currently unemployed have been out of work for 27 weeks or more. That group, known as the "long-term unemployed", was little changed from December at a little more than 4 million Americans. Long-term unemployment has grown steadily since Spring 2020 and is approaching the record set in April 2010, in the aftermath of the Great Recession. At that time, nearly 46% of the unemployed were out of work at least six months: 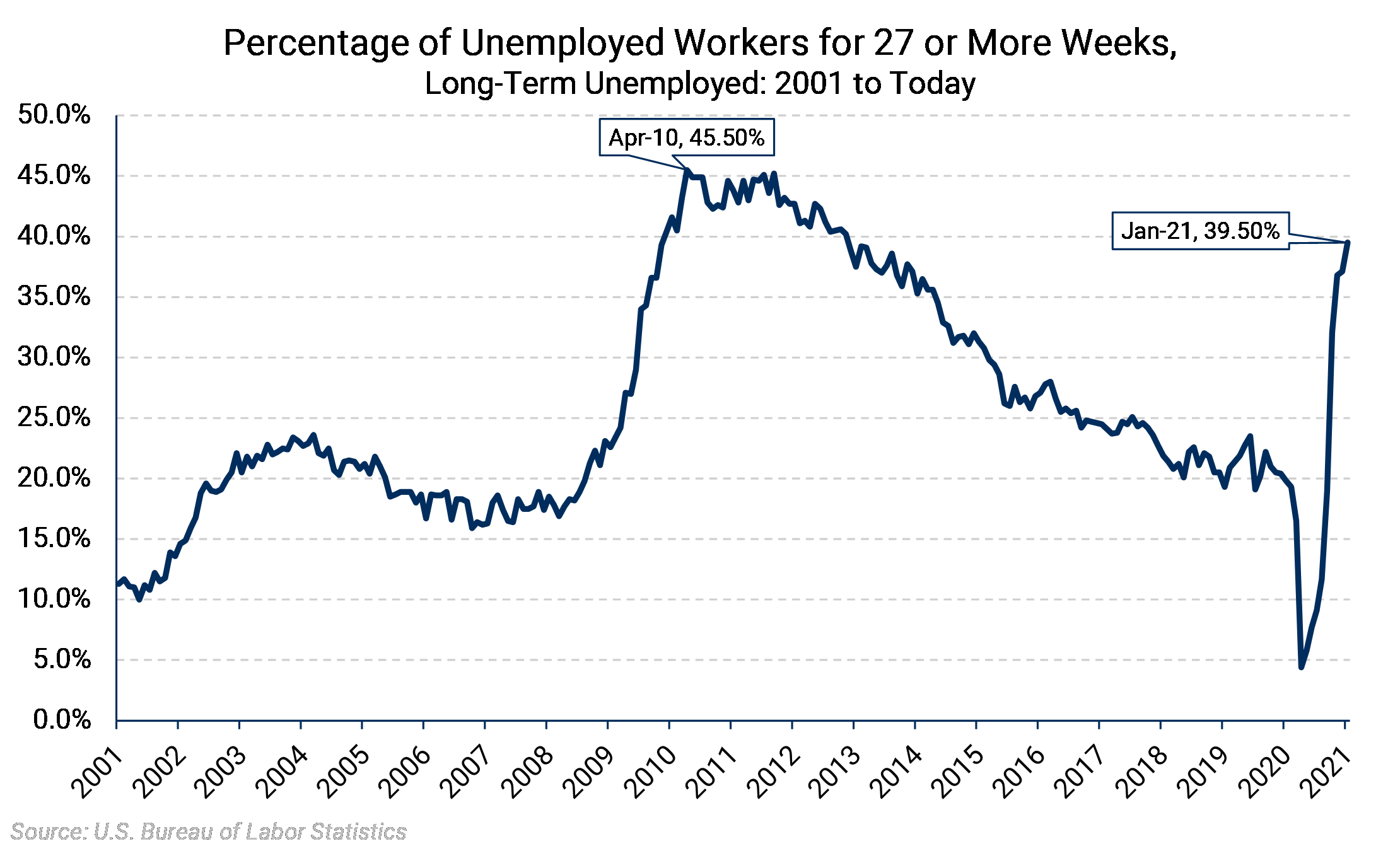 It would take approximately 29 years to get back to pre-recession 2020 levels at the current pace of job growth, according to the Economic Policy Institute. Of course, it is unlikely it will take three decades to recover. The U.S. is distributing vaccines to curtail and hopefully eradicate the coronavirus pandemic and $1.9 trillion of spending is about to be infused into the economy. However, pain will persist, at least in the short-term, before widespread vaccine rollouts and the accompanying resumption of "normal" economic activity occurs.

Biden and his administration, including Treasury Secretary Janet Yellen, have clung to the "go big" spending philosophy, claiming to have learned their lessons during their time governing during and after the Great Recession. The lesson portrayed is that it is more detrimental to the economy and future economic growth to "go too small rather than too big." The latest jobs figures have put a dent in a recent string of stronger economic data, including growth in manufacturing and home construction.

At the same time, the employment report included some bright spots. Americans are working longer hours and employment at temporary-help services jumped the most in three months, which may foreshadow a pickup in hiring in coming months. Average weekly hours rose to 35, the highest level in this data going back to 2006. Payrolls at temporary-help services climbed by almost 81,000.

Treasury yield and interest rate swap curves continue to steepen as longer-term rates climb, pulling medium-term rates along with them, while very short-term rates, such as one- and three-month USD LIBOR, remain at historically low levels.

This seemingly paradoxical rate scenario is being supported by two primary drivers. First, the Federal Reserve has continually reiterated its targeted federal funds rate of 0.00% to 0.25% for at least the near future while unemployment remains in crisis mode. Second, banks are becoming increasing flush with cash due to several money market and funding market dynamics, the most prominent being the U.S. Treasury issuing less debt in overnight to one-year tenures (Treasury "bills"), choosing instead to fund America's debt in longer maturities, locking in historically record low rates with longer repayment periods. It is currently unknown how the pending fiscal relief package will be funded, but rumors persist of the possibility of a 50-year Treasury bond issuance. Such 50-year auctions would likely further steepen the yield curve as it would lessen demand by primary dealers for 10-, 20- and 30-year securities, increasing their yields. 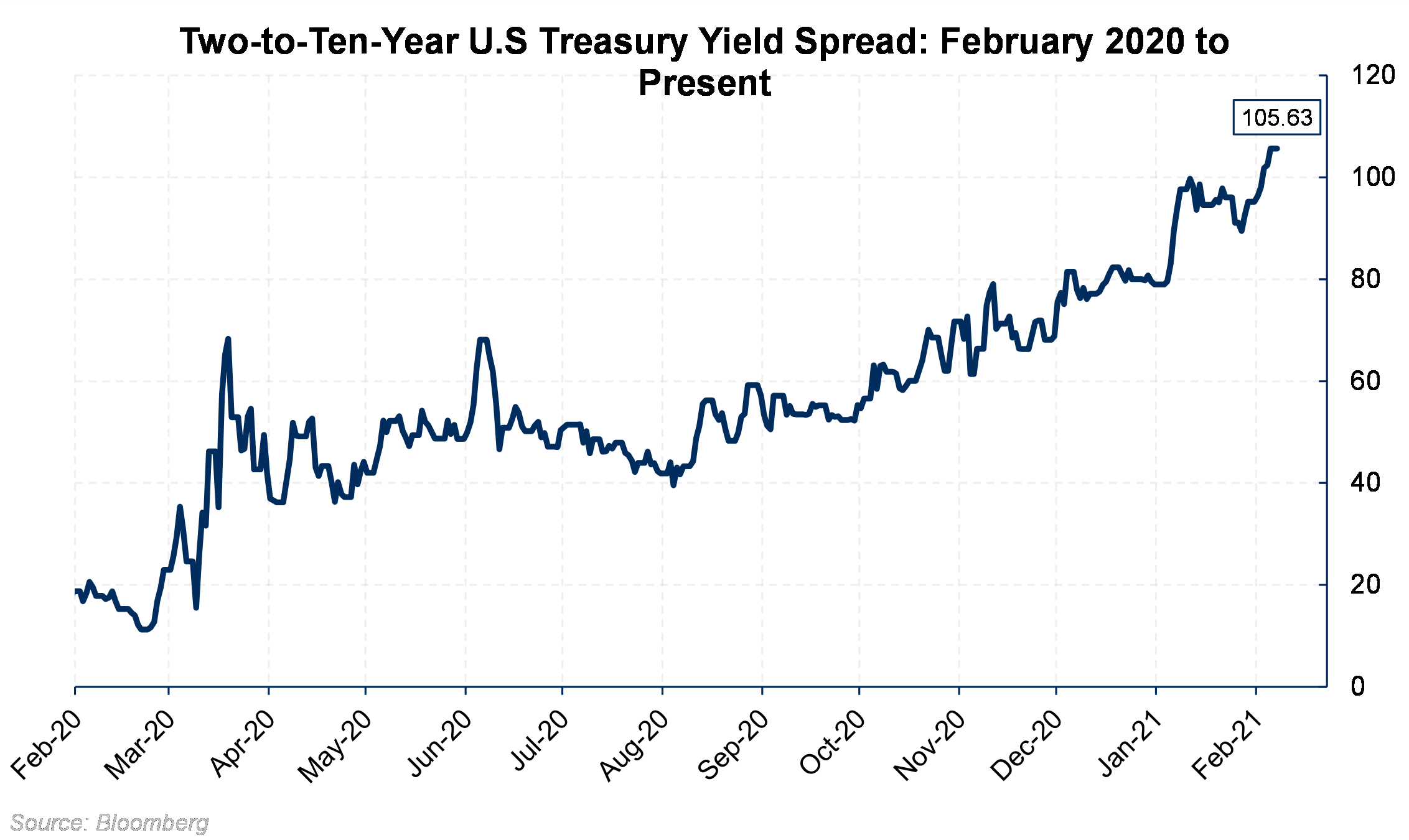 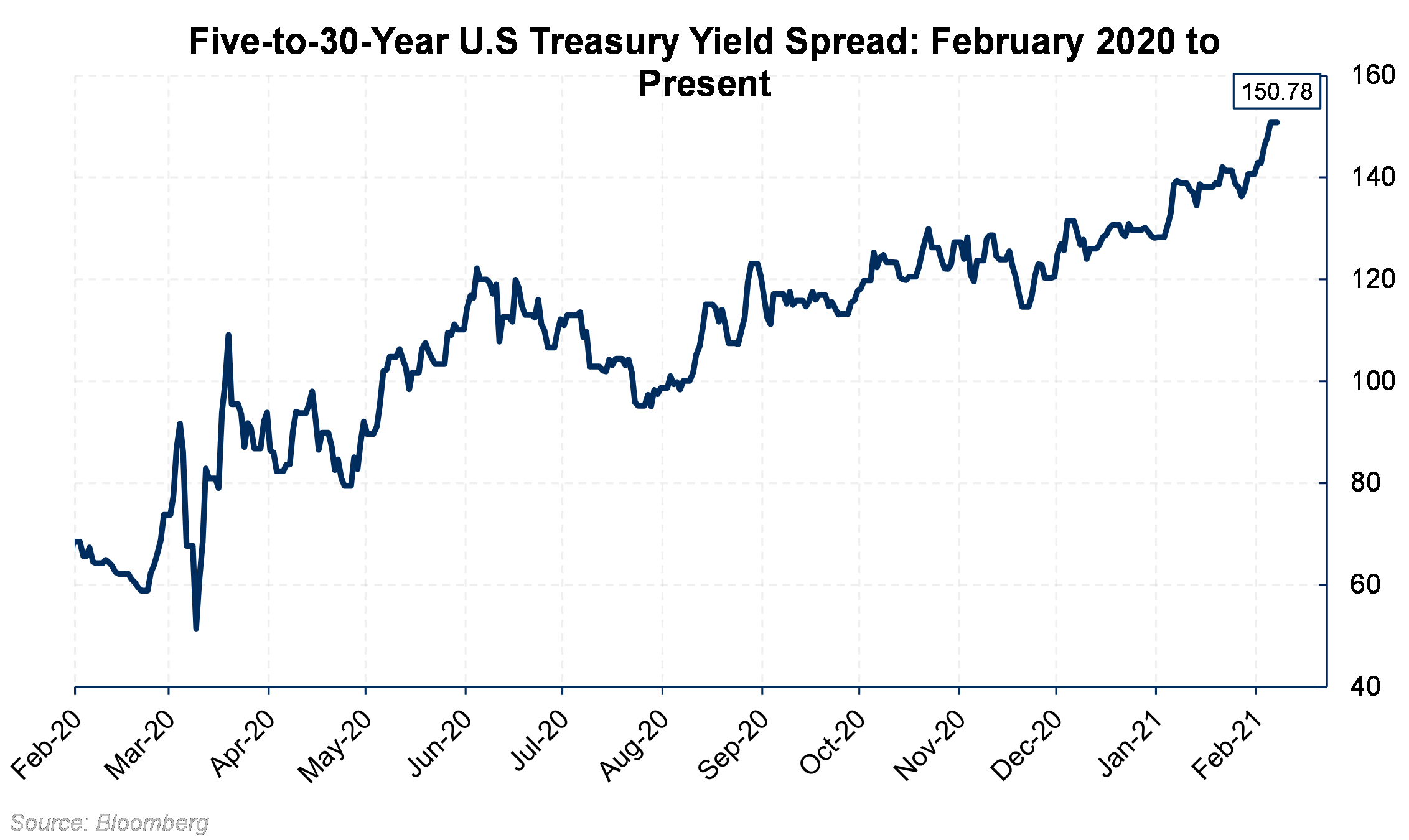 The shape of the yield curve is the bond market's way of indicating its forecast for future economic growth and the direction of rates. So, while the stock market and short-term interest rates seemingly portray different stories on the current U.S. economy, the remainder of the U.S. Treasury and swap rate yield curve is aligning with the positive, post-pandemic economic forecast for significant economic growth.

The two primary fundamentals that are causing significant market uncertainty are the employment crisis and inflation — can the former be corrected without igniting the latter? This will be the job of the Federal Reserve to manage. So, while all eyes continue to be on politics, the current fiscal relief spending package, and the upcoming infrastructure and green energy spending proposals in the near-term, the Fed will become an even larger force in the determination of these two major uncertainties.