(Updated September 1) OPEC, with its participating guest countries (collectively, OPEC+), remains a major force in determining oil prices. With the inclusion of Russia, the group accounts for almost half the world’s potential supply.

Below, we keep a running list on OPEC developments and online resources. This effort began in February 2021, so items before that date may not be included, even if they are relevant for understanding the current situation.

Recent developments and items to watch:

During the latest OPEC+ meeting, the group reached a consensus to proceed with the planned supply hikes. So far, 45% of idle capacity reached under last year's agreement has been brought back online.

The cartel remained steadfast in its plan, despite calls from the U.S. to increase production even further. The group's current schedule shows them boosting output in monthly installments of 400 MBbl/d. OPEC sees a supply surplus in 2022, implying it may not be able to adhere to its current supply hike schedule without pressuring prices lower.

There were worries that the group would halt its supply hikes, as oil markets briefly showed signs of weakening demand due to the delta variant, particularly in China and the U.S... However, the group seems to hold an optimistic outlook regarding demand, citing resilient fuel use as justification for the increase. As a result, OPEC raised its 2022 demand growth forecast from 3.28 MMBbl/d to 4.2 MMBbl/d.

(July 2) It appears UAE is willing to blow up an OPEC+ deal so it can produce more of its own oil, but the situation is fluid.

During the day Thursday, reporters were saying an OPEC+ committee was recommending a new set of production increases to raise output by 2 MMBbl/d between August and December. Simultaneously, the committee recommended extending the framework of supply cuts to December of 2022 from its current expiration date of April 2022.

The market interpreted the news very positively. The potential deal would make much more certain the pace of production increases, and the supply growth is slower than what OPEC and other groups are expecting out of demand growth this year.

However, the United Arab Emirates delegation ended all the fun. Reports came out that UAE would reject the deal unless some demands were met. The effect is that they want to increase their own production by 700 MBbl/d over and above any OPEC+ plans. When the meeting ended on Friday, no deal had been struck, and the group planned to reconvene on the 5th.

OPEC+ Expected to Increase Production Systematically by Another 2.0 MMBbl/d by Year-End

(July 1) An OPEC+ panel recommended the cartel do two things, both perceived as positive and bullish by the market: (1) Increase production again, this time by a total 2.0 MMBbl/d between August and December, or 400 MBbl/d each month, and (2) Extend the supply-cut quota deal through December 2022 so that it would not expire in April.

By many forecasts, this production increase would not keep up with demand growth and would keep the global oil market tight. For example, many estimates have the market in a deficit of about 2 MMBbl/d in early 2021. By year-end, that imbalance could widen as only a portion of OPEC's spare capacity would return, and at a lower rate than demand has grown.

In fact, the market apparently has concluded the same. On July 1, WTI prices lurched ahead by $2 by early afternoon, adding on to an already strong rally in anticipation of the OPEC+ meeting. Countless analysts and traders are likely finding confidence in their 2021 models now that they can write the supply figures in ink rather than pencil.

However, the question remains why OPEC would hold back production if they see robust demand growth. Two potential answers come to mind. First, some OPEC members had reportedly expressed concern about some COVID hotspots still holding back demand for petroleum. Second, OPEC may finally believe that the market could tolerate higher prices without encouraging a wave of new production out of the U.S. or elsewhere.

(June 24) OPEC is mulling a further easing of oil output cuts ahead of the cartel’s next meeting on July 1, as the strong rally in oil prices implies demand has returned quicker than expected. Since the last OPEC meeting, the August ’21 WTI contract has risen by $5.32/Bbl or 7.88%, despite the current supply hike schedule.

OPEC has not decided on the quantity or a timeline to return supply to the global market. Now that demand has shown signs of improvement, OPEC’s focus has likely shifted to non-OPEC supply. According to Reuters, OPEC only expects U.S. shale output to increase by around 200 MBbl/d this year, but next year’s output is forecast to rise by 500 MBbl/d to 1,300 MBbl/d.

OPEC+ Opted To Stick With Plan Agreed To In April

(June 1, 2021) On June 1, OPEC+ agreed to keep the planned production hike in through July. OPEC's Secretary-General Mohammad Barkindo said he did not believe higher Iranian supply would disrupt the oil markets. Reaffirming their three-phased output increases were considered supportive of oil prices. WTI rallied beyond $66/Bbl for the same week of the announcement. WTI at $66 was considered a technical resistance level. Barkindo, in his official remarks, said April data showed a drop in OECD commercial oil inventories of 6.9 MMBbl from the previous month to 2.96 billion barrels. (June 5)

OPEC+'s decision to stick with their previously agreed plan was seen as a non-event. However, oil prices reacted positively, finishing above $69.50/Bbl by June 4. The oil cartel continues to manage output to reduce OECD oil inventories to the rolling five-year average. We are nearly there by OPEC's estimates. It will be interesting how OPEC manages its supply with Iranian nuclear talks still ongoing with the EU and US. Iran has about 1.5 MMBbl/d of export capacity in the wings. The next meeting is scheduled for July 1, 2021. 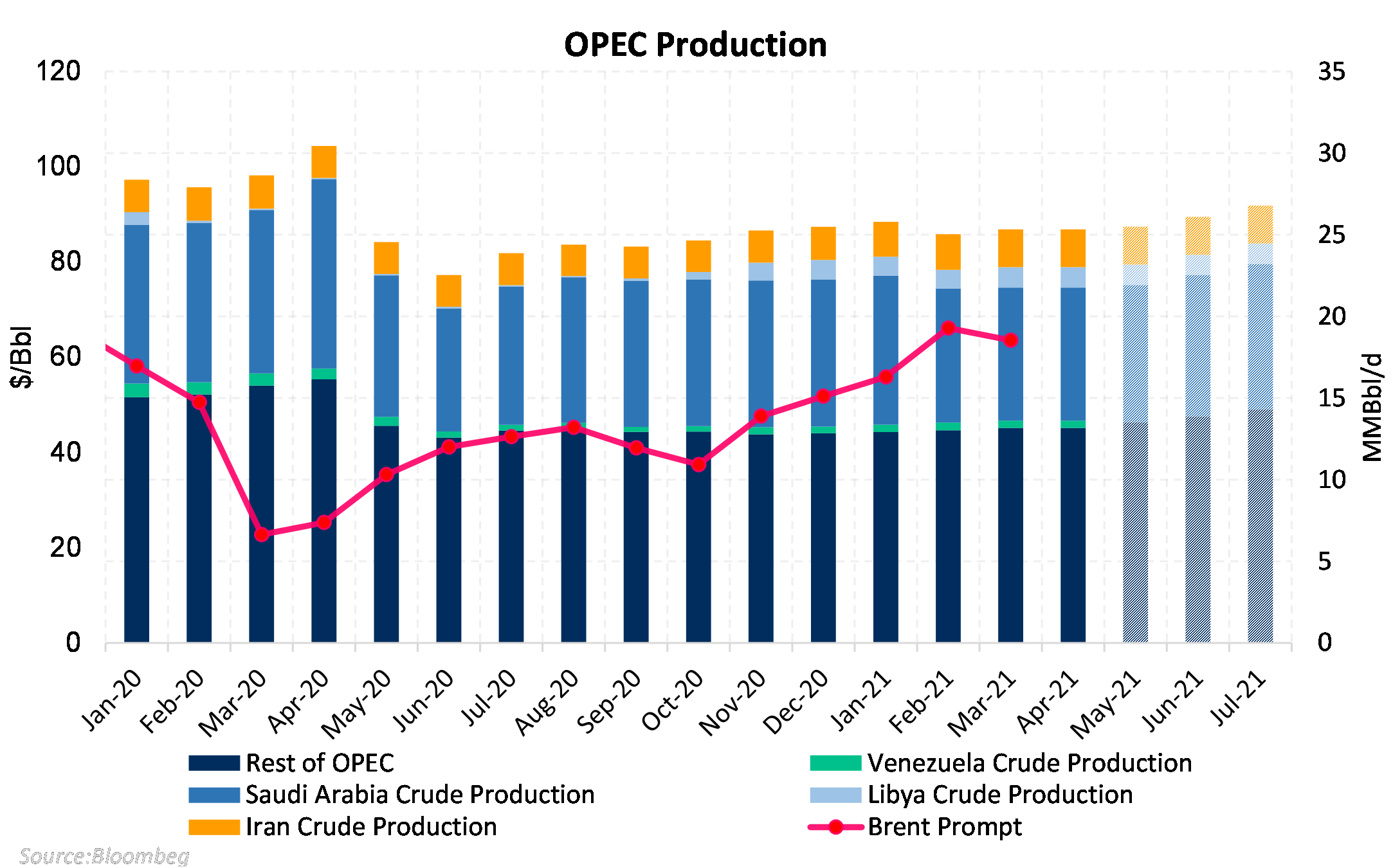 (Apr. 1, 2021) On Apr 1, OPEC+ agreed to increase oil output gradually. According to delegates, the cartel will raise its production by 350 MMBbl/d in both May and June and then increase by 440 in July. Saudi Arabia may also roll back some of its 1 MMBbl/d compensatory cuts over the same period in monthly increments of 250 MBbl/d beginning in May. In total the cartel will add 2 MMBbl/d in supply to the market from May to June. According to OPEC analysis, the group is expecting global inventories to reach their five-year average by the end of June and fall 35 MMBbl/d below the benchmark by July – even with the group raising production by 1.4 MMBbl/d during that time frame.

While many analysts were expecting the cartel to keep output steady for at least another month, prices remained firm in response to the news. The cautious move by the group reaffirms the notion that they are focusing on keeping prices in the $55 – $65/Bbl range and reducing inventories to “normal levels” at a steady pace. Further reassurance came out of the meeting, with the Kingdom highlighting the importance of keeping its finger on the pulse of the oil markets, to prevent overheating. The next meeting is scheduled for April 28, 2021.

The attacks were claimed by Iran-backed Houthi rebels, according to Bloomberg. The initial scare and possible threat to supply resulted in Brent crude reaching $71.37/Bbl and WTI touching nearly $68.

Explosions rocked the city of Dhahran, Saudi Arabia, where Aramco is headquartered, according to witnesses. The Saudi Energy Ministry said key oil infrastructure at Ras Tanura was hit during the attack, but that its facilities and oil output was unaffected. Loadings in the Ras Tanura area were continuing on Monday, according to the Ministry.

Oil prices have given back attack-related gains as of 7:00 AM Houston time on Monday.

The Persian Gulf side of Saudi Arabia is home to the Ras Tanura terminal – the world’s largest oil export port. There are two large oil tank farms, a refinery, and multiple deep water ports in the Ras Tanura area. The terminal is capable of exporting about 6.5 MMBbl/d, according to Bloomberg.

This attack doesn’t look to have caused a production disruption this time. Different Saudi oil infrastructure came under fire in September 2019, cutting production for about a month.  Saudi Arabia is one of the world’s largest oil producers and attacks that disrupt production can and has led to higher oil prices. 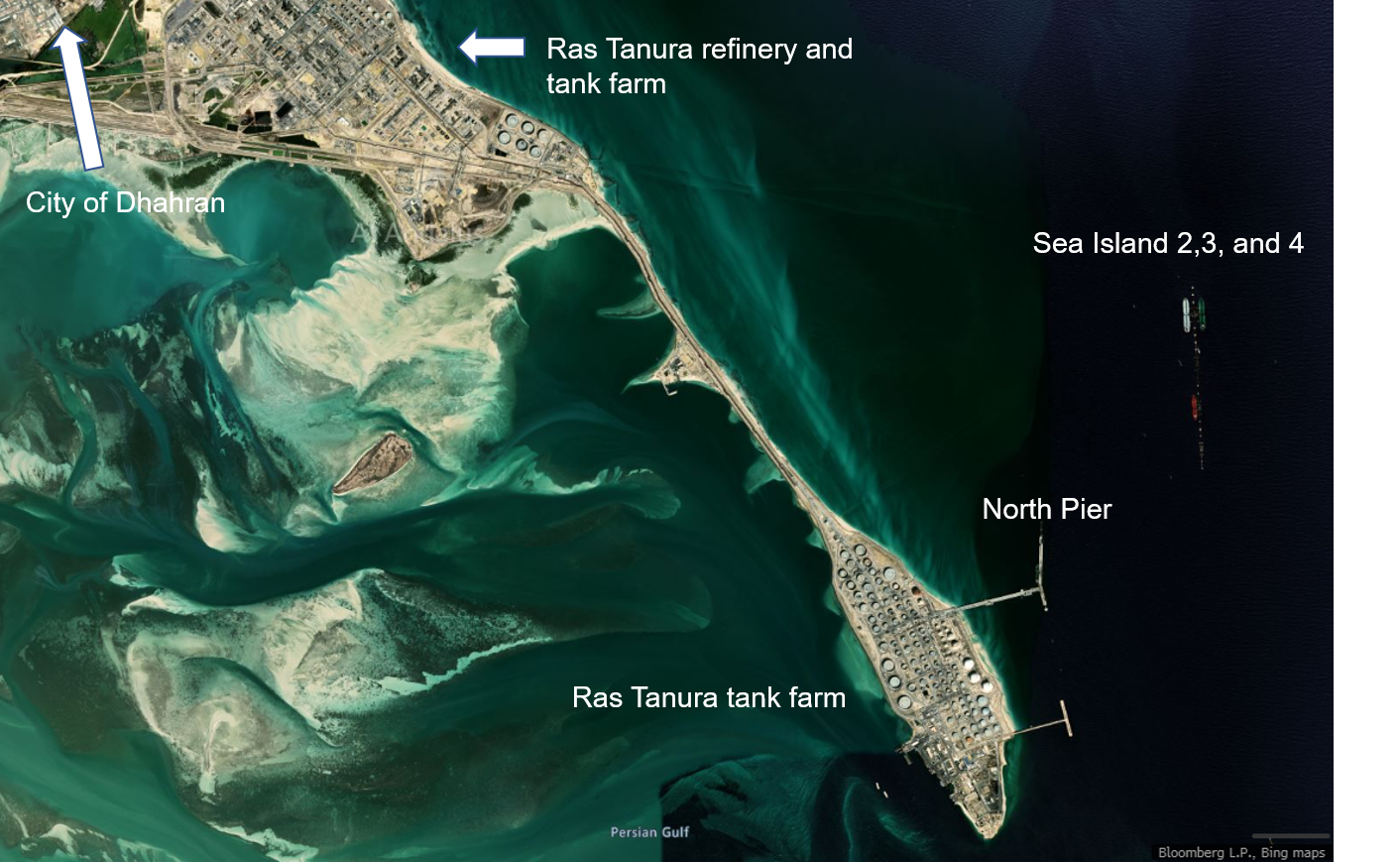 OPEC+ surprises the market with unchanged production quotas for April

(Mar. 4, 2021) The market likely expected Saudi Arabia to return its latest 1 MMBbl/d of production cuts, and the balance of OPEC+ to increase production modestly, in the full OPEC+ meeting held March 4. However, the group elected to keep total output almost unchanged.

Russia received a small exemption of 130 MBbl/d, to start in April.

AEGIS notes Saudi Arabia continues to make the largest investment, voluntarily withholding additional barrels to keep the market undersupplied and prices supported. One has to wonder if the Saudis see those additional cuts as necessary to hold together the supply-cut deal for longer.

Global storage levels are likely depleting near 1 MMBbl/d, and the continued destocking would imply backwardation in the oil curves and support for prices. Yet, we recognize that as global demand becomes more certain, OPEC+ has around 7 MMBbl/d of spare capacity that could be brought back.

(Feb. 24, 2021) Some members consider current pricing to be too high, the market needing supply. Reuters reports a “modest” increase in production will be considered.

The group will look at updated supply and demand figures, for possible action in April.

Official figures have OPEC+ withholding just over 7 MMBbl/d in February. That number includes a short-term action taken by Saudi Arabia to cut its own production by another 1 MMBbl/d through March.

OPEC+ must measure the global supply-demand balance carefully to bring an appropriate level of supply back.

(Feb. 17 , 2021) Saudi Arabia plans to unwind 1 MMBbl/d of supply cuts starting in April.* The action would end the 1 MMBbl/d of unilateral curtailments the country announced in early January for February and March. Since January 5, global oil prices have risen over 25% to $64.34/Bbl (through February 17).

OPEC+ must measure the global supply-demand balance carefully to bring an appropriate level of supply back.