U.S. oil producers have resisted growth plans, even as prices have risen sharply. Earnings calls for 4Q2021 are complete and show modest growth among those disclosing production plans.

Crude oil prices have risen past $100 per barrel due to Russia's invasion of Ukraine, and the average cost of gasoline in the United States has topped $4 per gallon. On the other hand, domestic oil output has not changed much in the last two years. The chart below shows the rally of the WTI prompt month and subsequent strips of the forward curve. 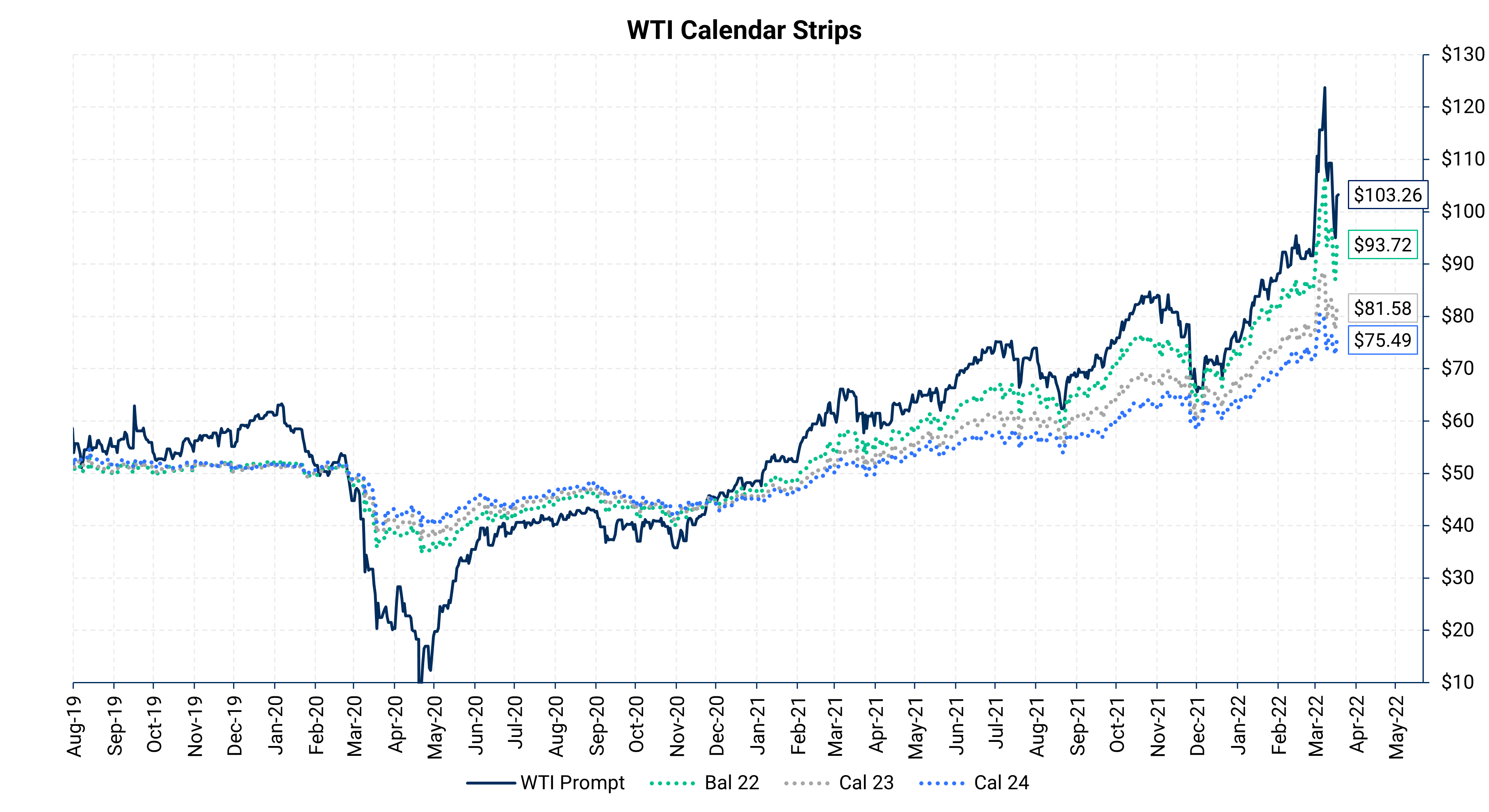 According to the EIA, crude-oil production was 11.6 million b/d for the week ending March 11. It has held near that level for the last three months. While production is up about 0.6 MMBbl/d from a year ago, it is still much below the 13 MMBbl/d from before COVID. Producers have hardly rushed to ramp up production to take advantage of high pricing. 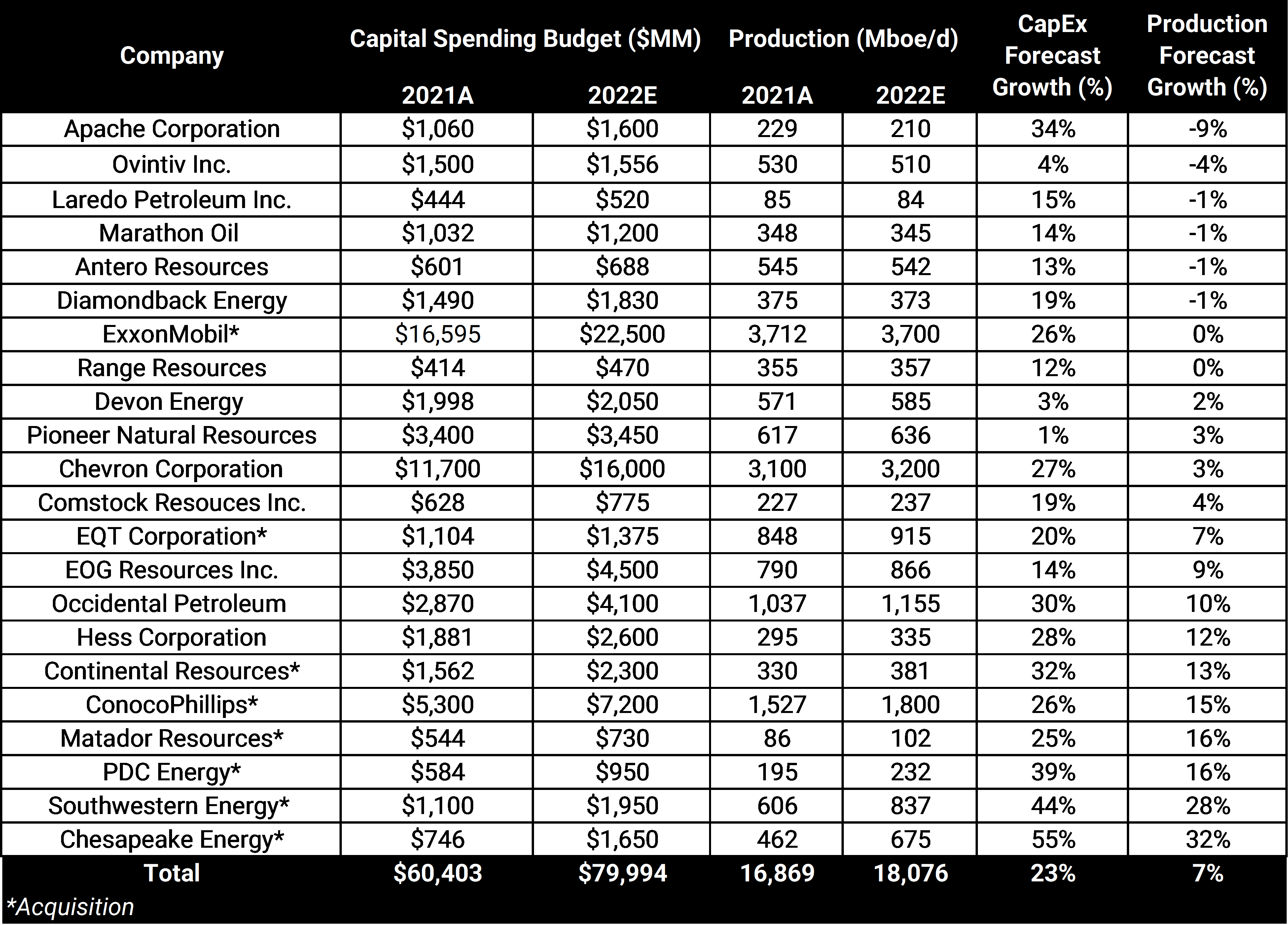 To obtain a brief glimpse of how the 4Q21 earnings season has played out, we aggregated capital spending and production statistics from several larger U.S. independent E&P companies for 2021 and 2022. Investment among these names should rise this year, but production growth would be meager.

Capital spending by these companies is stated to increase by 23%, from roughly $60 billion in 2021 to $80 billion in 2022. Diamondback Energy, for example, increased its budget for 2022 by 19% to accommodate inflation-related expense increases.

Significant capital budgets aren't translating into increased production, with production volumes for the said companies growing only 7% in 2022 compared to 2021. And, that low number is even supported by acquired volumes. Most companies have reported that they will maintain flat production through 2022. In our list, only companies that have had made acquisitions have projected much higher capital spending and production from last year.

Two supermajors are noteworthy: While keeping a flat output overall, global producers ExxonMobil and Chevron announced ramping up their production by 25% and 10% in the Permian Basin. Prices are higher, but many perceive the global market to be persistently undersupplied. The news of two of the top oil producers came as the International Energy Agency (IEA) predicted ongoing demand growth; in the fourth quarter of 2021, global demand increased by 1.1 MMBbl/d, bringing the total to 99 MMBbl/d. Total demand in 2022 is now forecasted to be 99.7 mb/d, up 2.1 MMBbl/d from 2021.

The Russia-Ukraine conflict emerged just as this quarter’s earnings calls were ending. WTI at a point soared to $130.50 on March 6 as President Biden announced Russia’s energy imports ban. Then, prices retreated amid news of optimistic Russia-Ukraine negotiations to $109.33 as the week ended. Volatility, uncertainty, and the danger of more Russian oil sanctions could result in higher prices.

Perhaps these earnings calls happened too early for companies to announce their plans to respond to recent-higher prices. Some activity may already be happening. The oil and gas rig count, an indicator of future output, increased 13 to 663 in the week ending March 11, the highest level since April 2020, according to Baker Hughes.

Although high prices can improve profitability, producers are concerned that this may reduce demand or otherwise be short-lived. They are concerned that massive new drilling investments will produce oil after the dust has settled and prices have relaxed to lower pre-Russia/Ukraine levels. "What we don't want to do as a company, and I don't think anyone in the industry wants to do, is try to chase prices up in the short term and have that run-up be ultimately ineffective," said Chesapeake CEO Domenic Dell'Osso (Reuters).

Hedges can mitigate some of that uncertainty in future prices. Many AEGIS clients have used the recent run-up in oil prices to set both oil and gas hedges and make cash flow in 2022-2023 much more predictable.