The Treasury selloff that started the year is rippling across the globe as investors price in the risk that the Federal Reserve raises interest rates faster than currently anticipated to contain inflation. Yields on the bellwether U.S. ten-year notes rose above their high in 2021 of 1.77% to nearly 1.80% intraday Friday to end this week. This rate rise maintained despite the significant disappointment in the December nonfarm payrolls report. 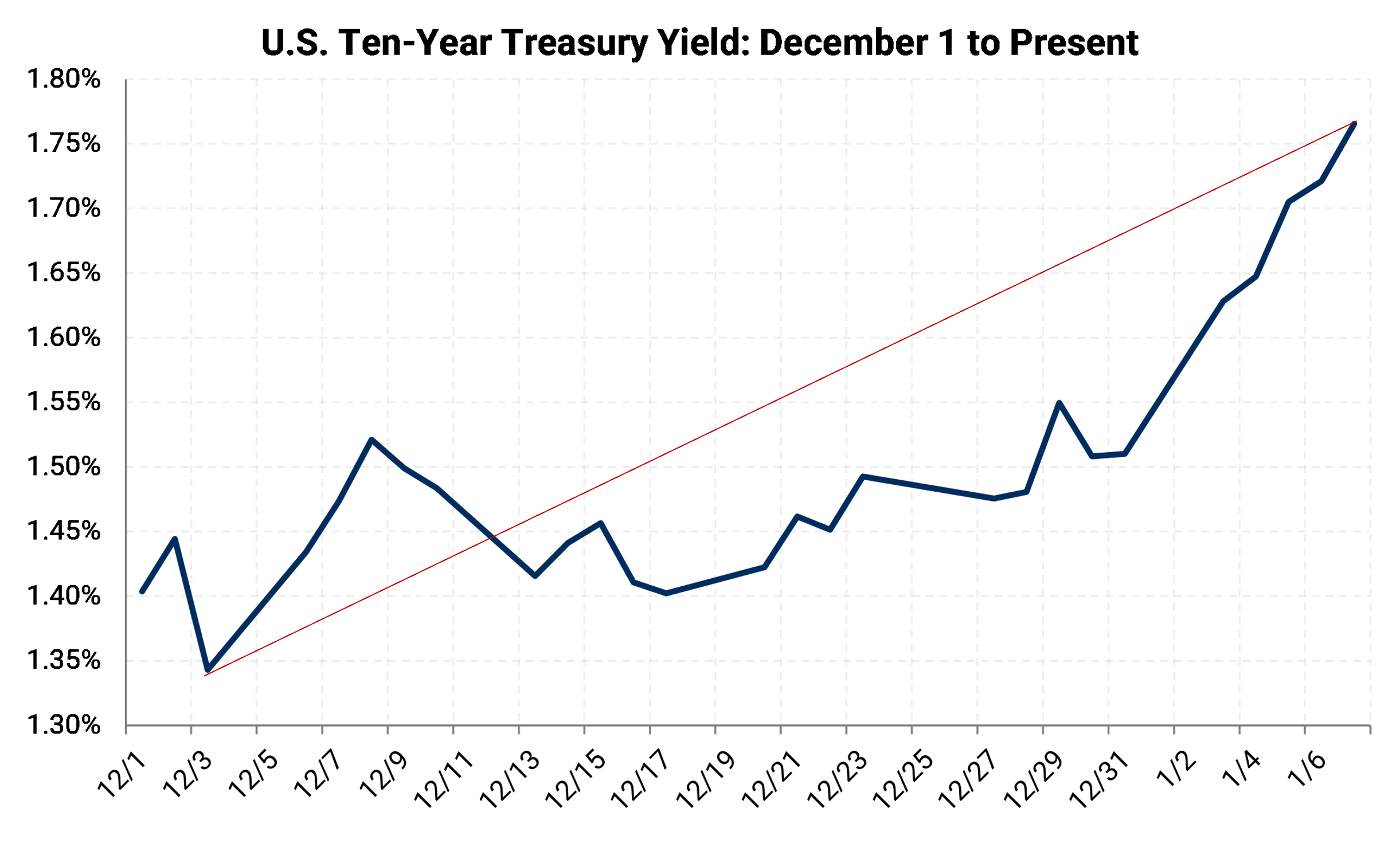 This is the steepest increase in the ten-year yield since June 2020. The jump sparked a sell-off in bonds and equities across Asia and Europe and widened divergences in rate expectations across markets.

In a document released on Wednesday that markets took as decidedly hawkish, the minutes from the December 14th-15th FOMC policy meeting showed Fed officials uniformly concerned about the pace of price increases that promised to persist, alongside global supply bottlenecks well into 2022.

The minutes showed officials’ increasing preference for a faster path of rate hikes and a shrinking of the bank’s $8.8 trillion balance sheet. According to the FOMC minutes, participants seemed to feel more comfortable with shrinking the balance sheet more immediately after commencing rate hikes than what was seen in 2018, with some participants even asserting that “removing policy accommodation by relying more on balance sheet reduction and less on increases in policy rates could help limit yield curve flattening during policy normalization”.

The strength in U.S. rates combined with these updated forecasts for even more aggressive rate hikes have helped to support the U.S dollar against most major currencies, as seen in the U.S. Dollar Index (“DXY Index”) which is maintaining its highest levels since July of 2020: 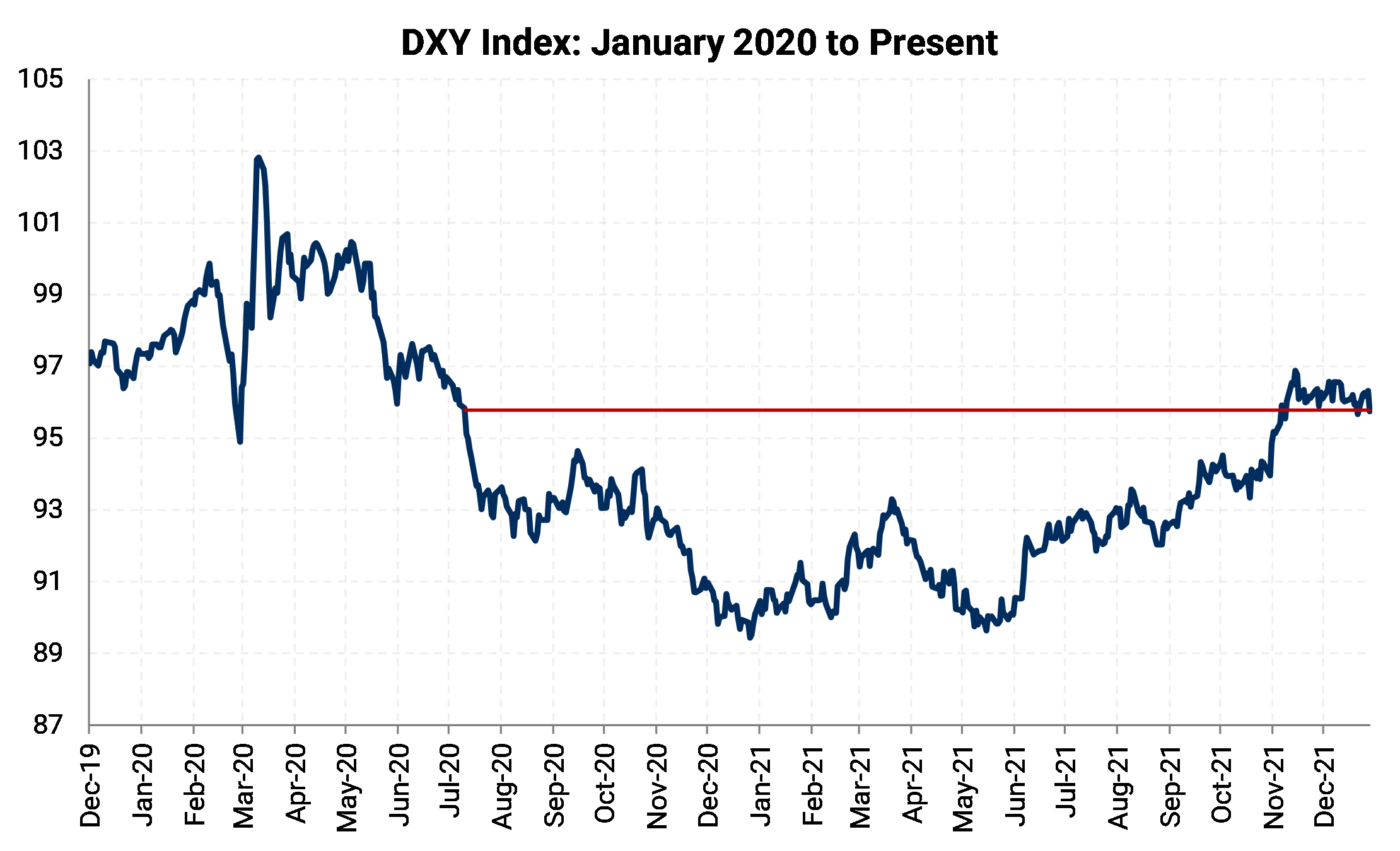 Federal funds futures have an implied probability of about 80% of a rate hike in March, about two to three months earlier than anticipated before the release of these minutes.

Federal Reserve Chairman Jerome Powell will appear before the Senate Banking Committee next week for a hearing on his nomination for a second four-year term as head of the central bank and is likely to update his views about the economy at that time.

The December nonfarm payroll report released at the end of the week on Friday was over 50% lower than expected, but wages paid rose more than anticipated, likely adding to inflationary pressures.

The 199,000 increase in nonfarm payrolls in December followed a revised 249,000 gain in November: 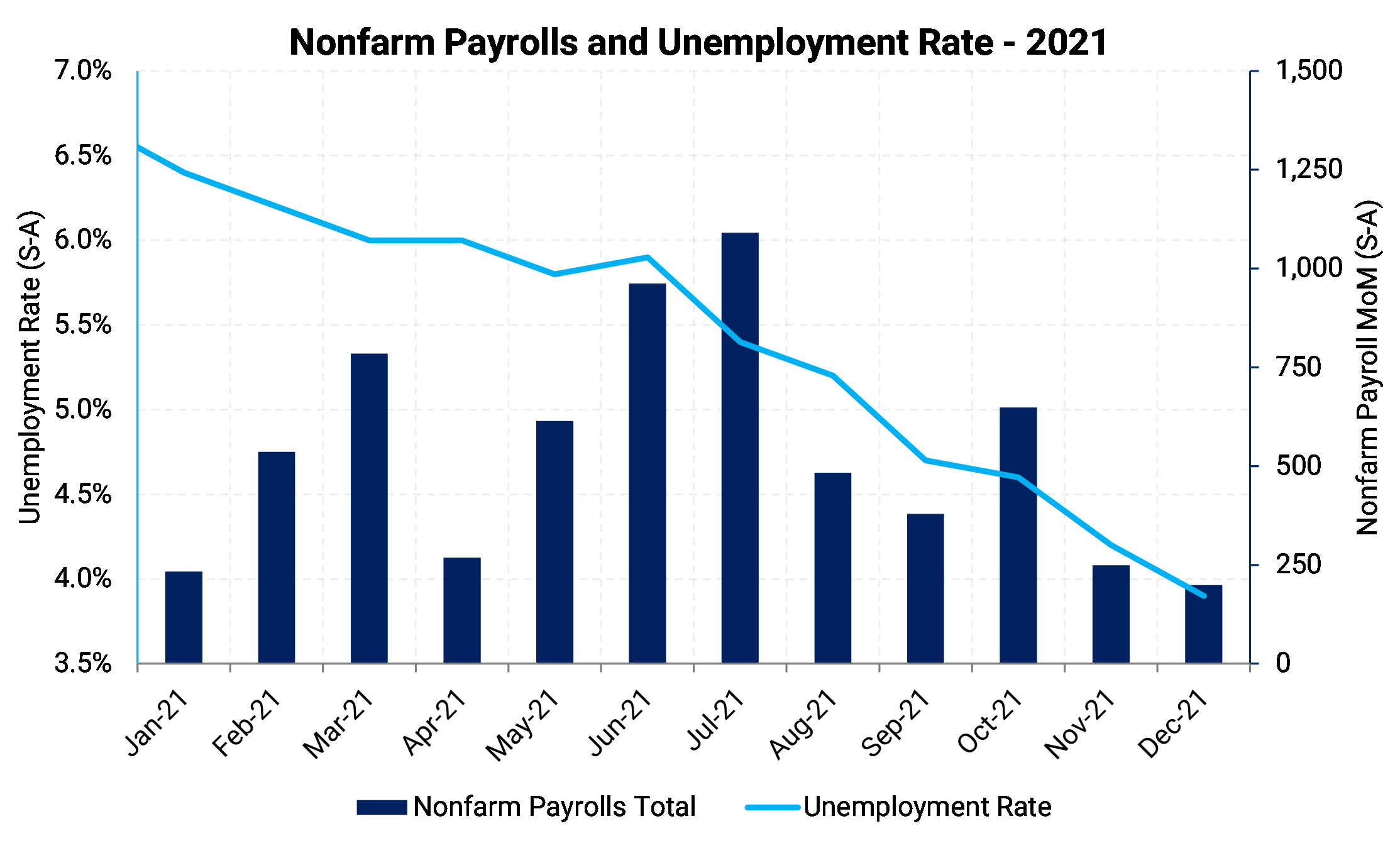 The unemployment rate fell to 3.9%, below the consensus forecast of 4.1%, while the labor force participation rate was unchanged.

The survey period for the jobs report ended mid-month, so Omicron-related impacts later in December will be reflected in the January report to be released on February 4th.

Looking at wage growth, average hourly earnings rose 4.7%, which while down from the upward revised 5.1% YoY for November, was well above the expected level of 4.2%.

The jobs report showed there were 6.3 million unemployed people in December 2021, compared to 5.7 million in February 2020, just before the COVID-19 wave hit America. This narrowing differential illustrates the strong rebound in the demand for labor as the economy continues to recover. This conflicts with the information from the weekly jobless claim report released earlier in the week, which showed that voluntary job separations reached a new record, with 4.5 million Americans quitting their jobs in November. Furthermore, the increase in work nonattendance caused by the Omicron wave will only compound the current severe labor shortages.

This is a classic case of increasing demand and diminishing supply, which inevitably leads to higher wages and the exacerbation of the inflationary pressures throughout the economy.