Officials are scrambling to clear up overloaded supply lines, unclog backlogged ports, and find thousands of workers needed to overcome shortages and rising costs. Price increases for food, shelter, and other staples have accelerated after the delta coronavirus variant upset the global economy and supply chain.

While U.S. retail price increases are showing multi-decade highs, the wholesale price report offers signs that producer price increases are lessening despite these supply chain challenges and broad shortages ranging from commodity inputs to labor. In either case, rising prices are failing to diminish retail sales, which unexpectedly rose in the past month in the face of declining consumer sentiment.

The Treasury and interest rate swap yield curves flattened after a faster-than-expected rise in consumer prices reinforced the view that the Federal Reserve will move to remove monetary stimulus by tapering in the coming months. The Consumer Price Index (“CPI”) rose 0.4% in the month of September after rising 0.3% in August. The median expectation called for an increase of 0.3%. With these readings, the CPI rose 5.4% over the past twelve months: 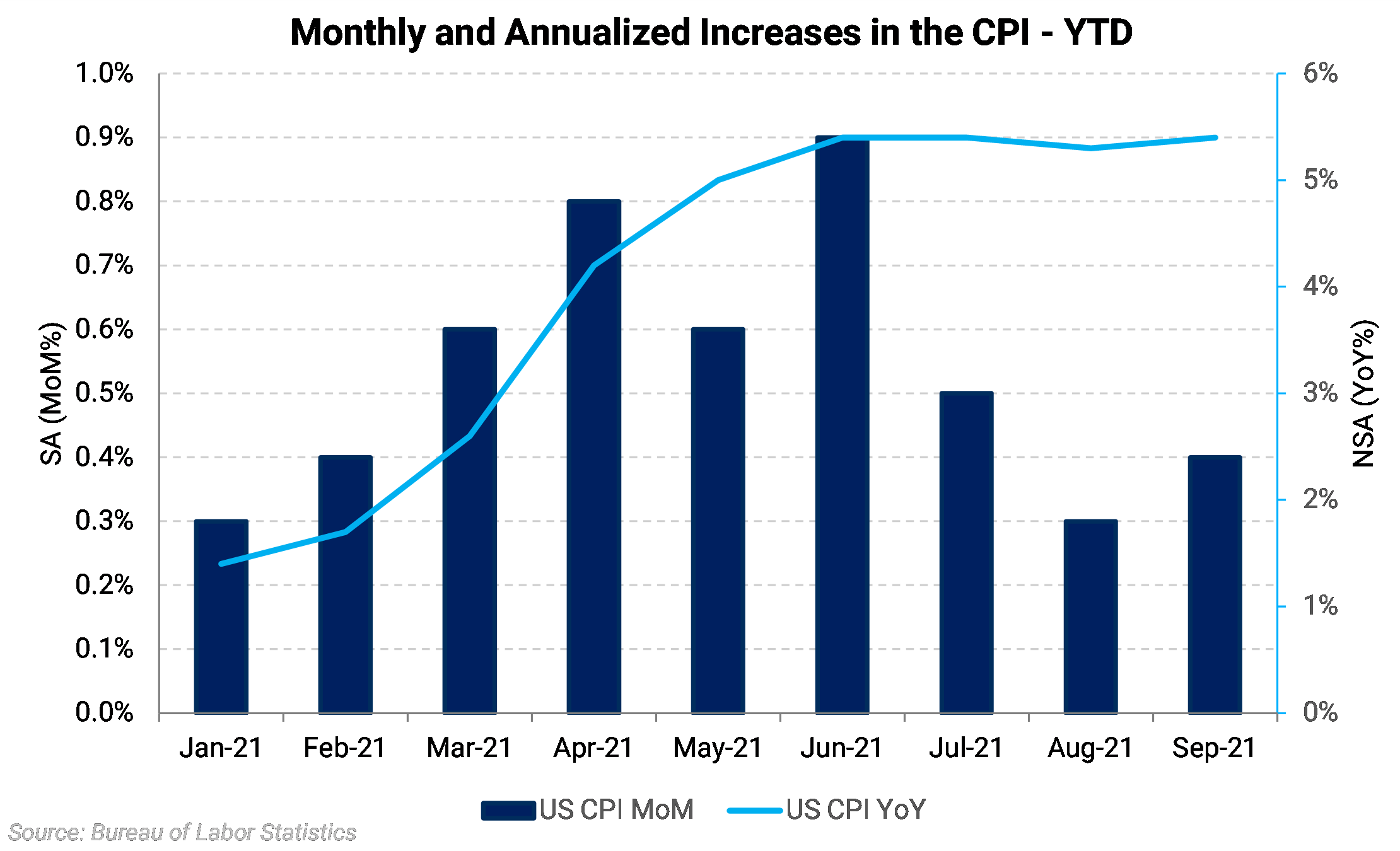 With this increase, Social Security payments will see their highest annual increase since 1982, which is both good and bad news – good news for those receiving higher payments in their effort to keep up with inflation, but bad news for the sustainability of this pillar of American social benefits.

The market’s inflation expectations remain steady following the CPI report. The Fed continues to stick to their temporary guns with Fed Vice Chair Richard Clarida saying Tuesday ahead of the CPI report that the unwelcome surge in inflation this year will prove to be “largely transitory,” echoing comments from other officials who chalked up the elevated price pressures primarily to supply-chain bottlenecks.

…while the PPI posted its slowest increase this year

Prices charged by producers rose at a slightly slower rate in September despite supply chain snarls and shortages that have driven up manufacturing and shipping costs. The Producer Price Index (“PPI”) rose 0.5% in September after rising 0.7% in August. The median expectation called for an increase of 0.6%. With these readings, the PPI rose 8.6% over the past twelve months: 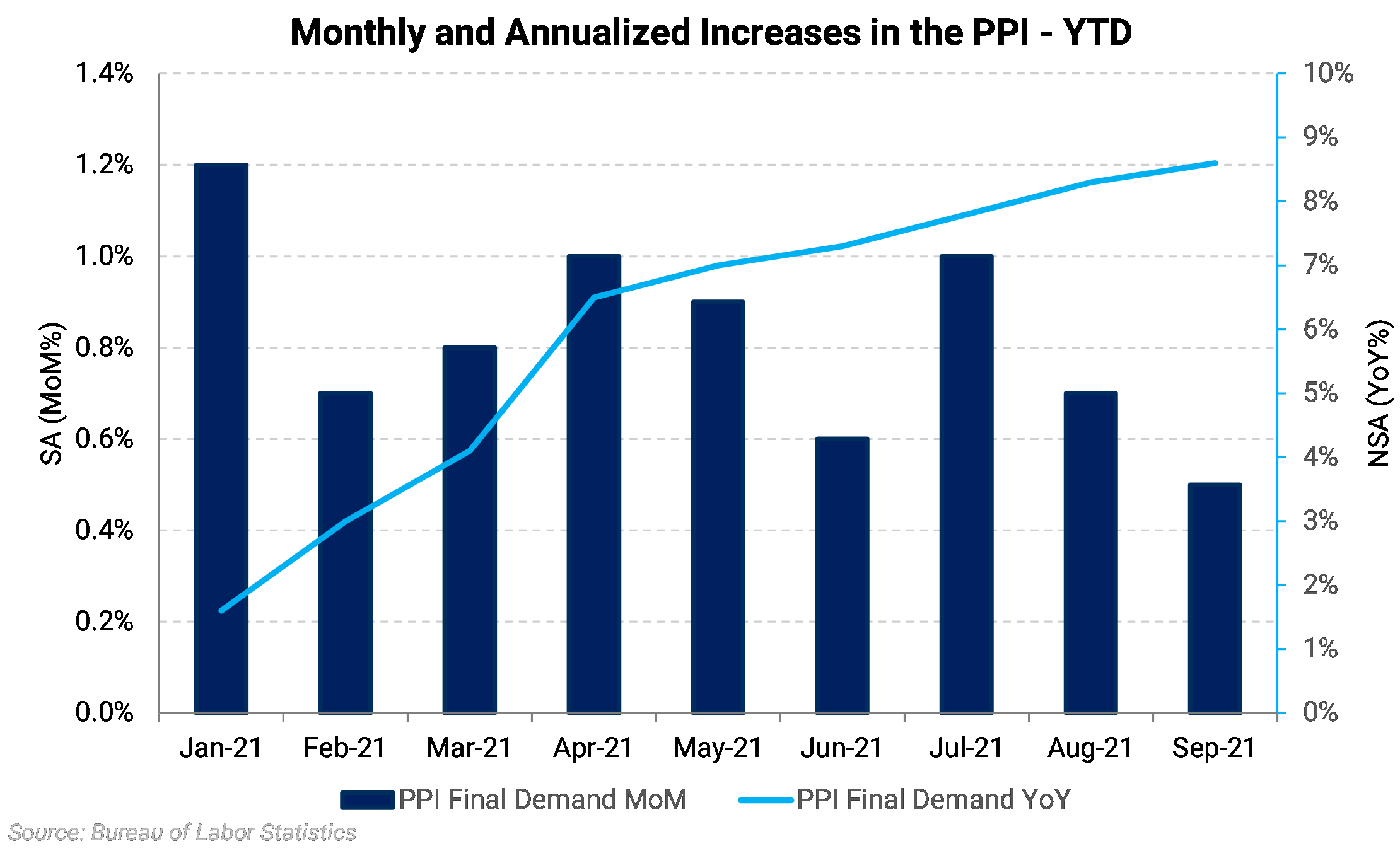 This annual increase is the highest recorded since the Labor Department began calculating annual PPI growth in November 2010.

Excluding volatile food and energy components, the Core PPI rose 0.2%, the smallest advance this year. Annually, this makes the 12-month rolling increase in this wholesale indicator 6.8%.

Almost 80 percent of the total increase in producer prices came from a 1.3% monthly jump in the cost of final demand goods — products purchased by retailers or wholesalers to eventually be sold to retail consumers and businesses. Half of the jump came from energy prices alone, which rose sharply in September.

The benchmark U.S. ten-year Treasury yield fell through Thursday after data inflation and the labor market eased worries that the Federal Reserve may need to act earlier than expected to combat rising prices.

Coming off the lower than anticipated PPI report, weekly initial job claims for state unemployment insurance dropped 36,000 to a seasonally adjusted 293,000 versus expectations of 316,000.

Shorter-term yields have risen while longer dated yields have dipped, which has served to flatten the yield curve, indicating the market is anticipating a rate hike by the Fed. However, San Francisco Federal Reserve Bank President Mary Daly on Thursday said inflation and employment have made enough progress for the U.S. central bank to begin scaling back its monthly bond buying but is far from ready for interest rate hikes.

The gap between yields on two- and ten-year Treasury notes, seen as an indicator of economic expectations, touched a two-week low: 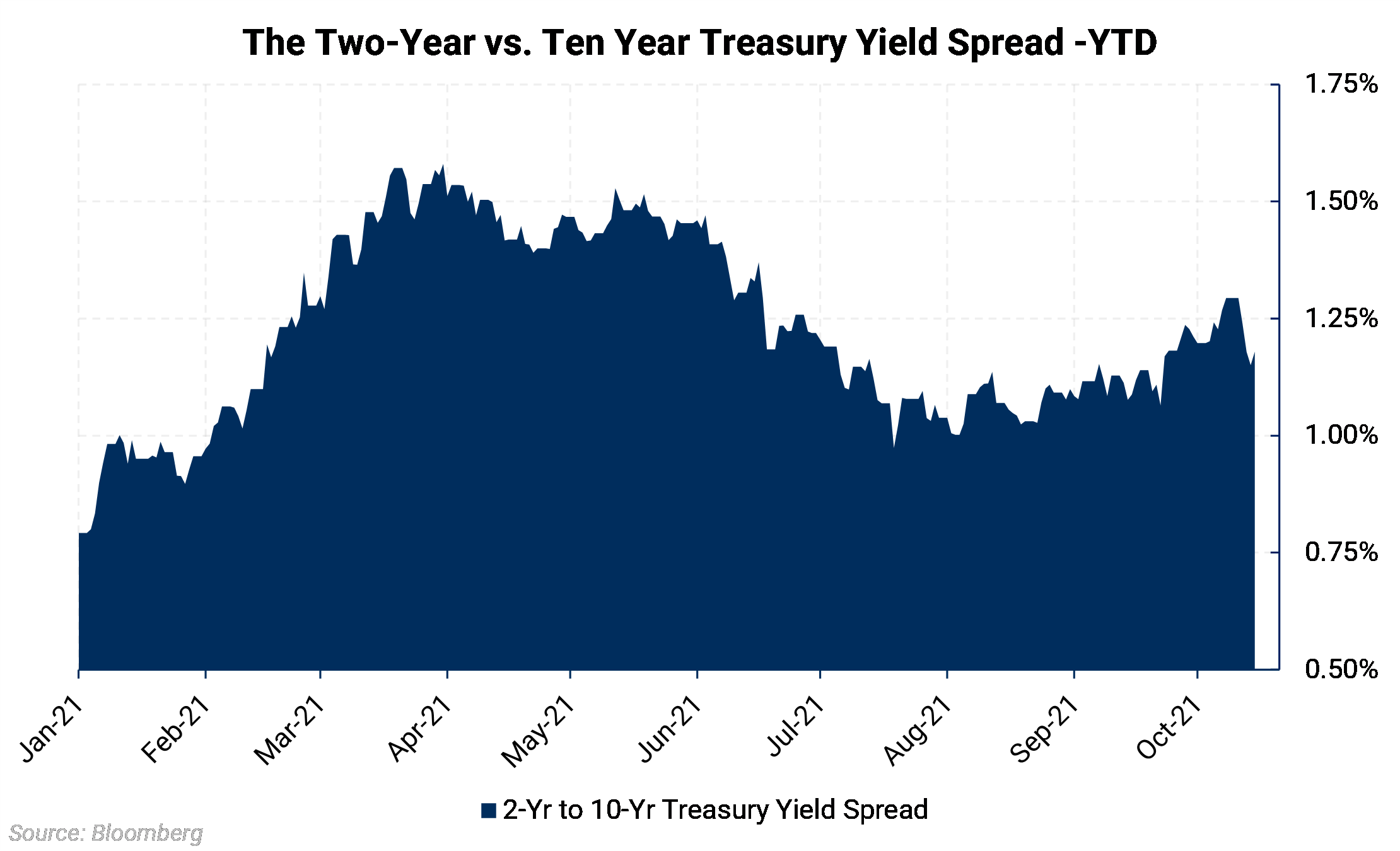 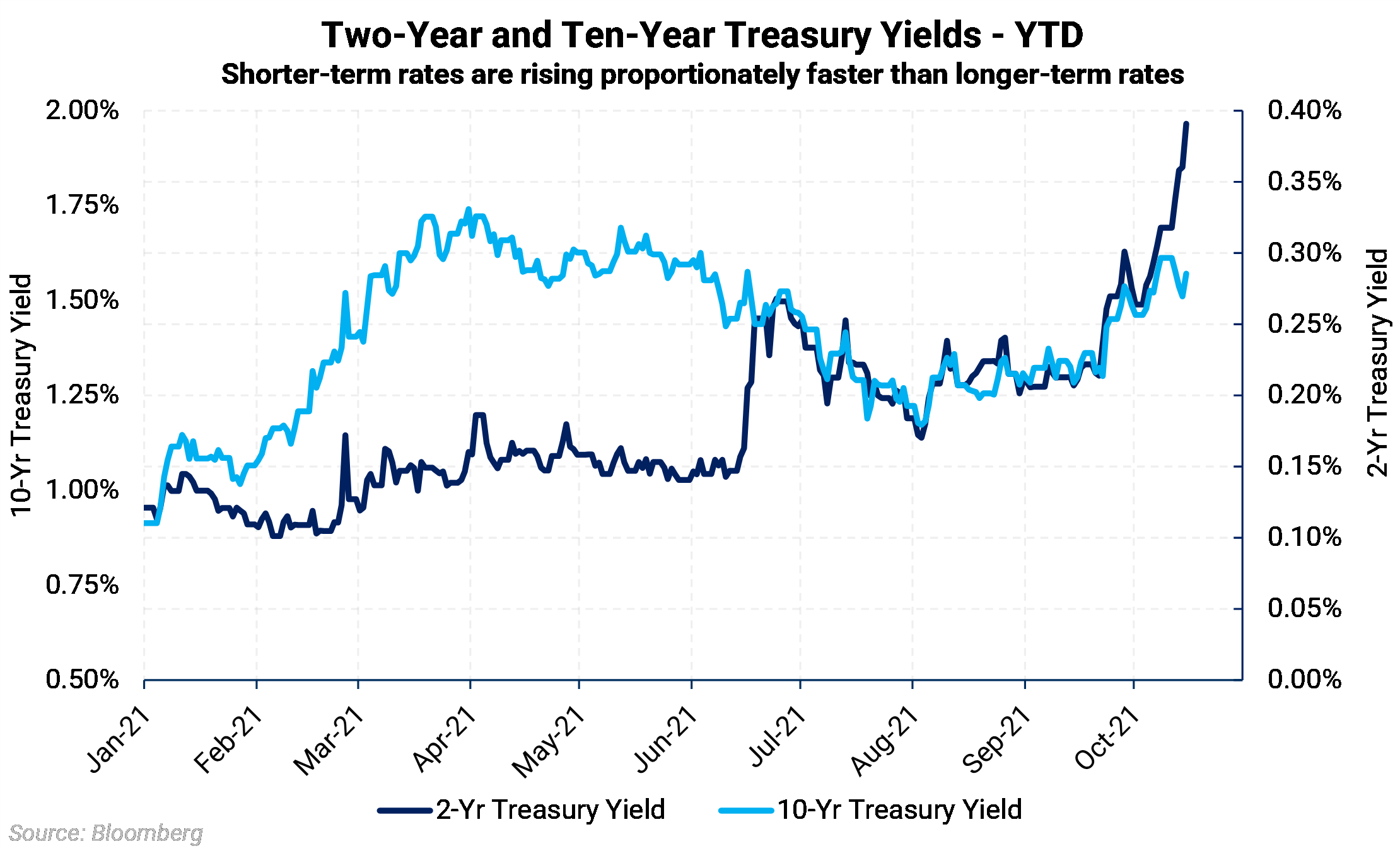 Retail sales surprise in the face of falling consumer sentiment

After a recent small uptick, U.S. consumer sentiment fell unexpectedly in early October back down to 71.4, now the second-lowest level since 2011, as Americans grew more concerned about both current conditions and the economic outlook. Consumers expect inflation to rise 4.8% over the next year, the highest since 2008. Buying conditions were seen as less favorable, especially for vehicles. “When asked to describe in their own words why conditions were unfavorable, net price increases were cited more frequently than any time since inflation peaked at over 10% in 1978-80,” Richard Curtin, director of this University of Michigan survey, said in a statement following Friday’s release. 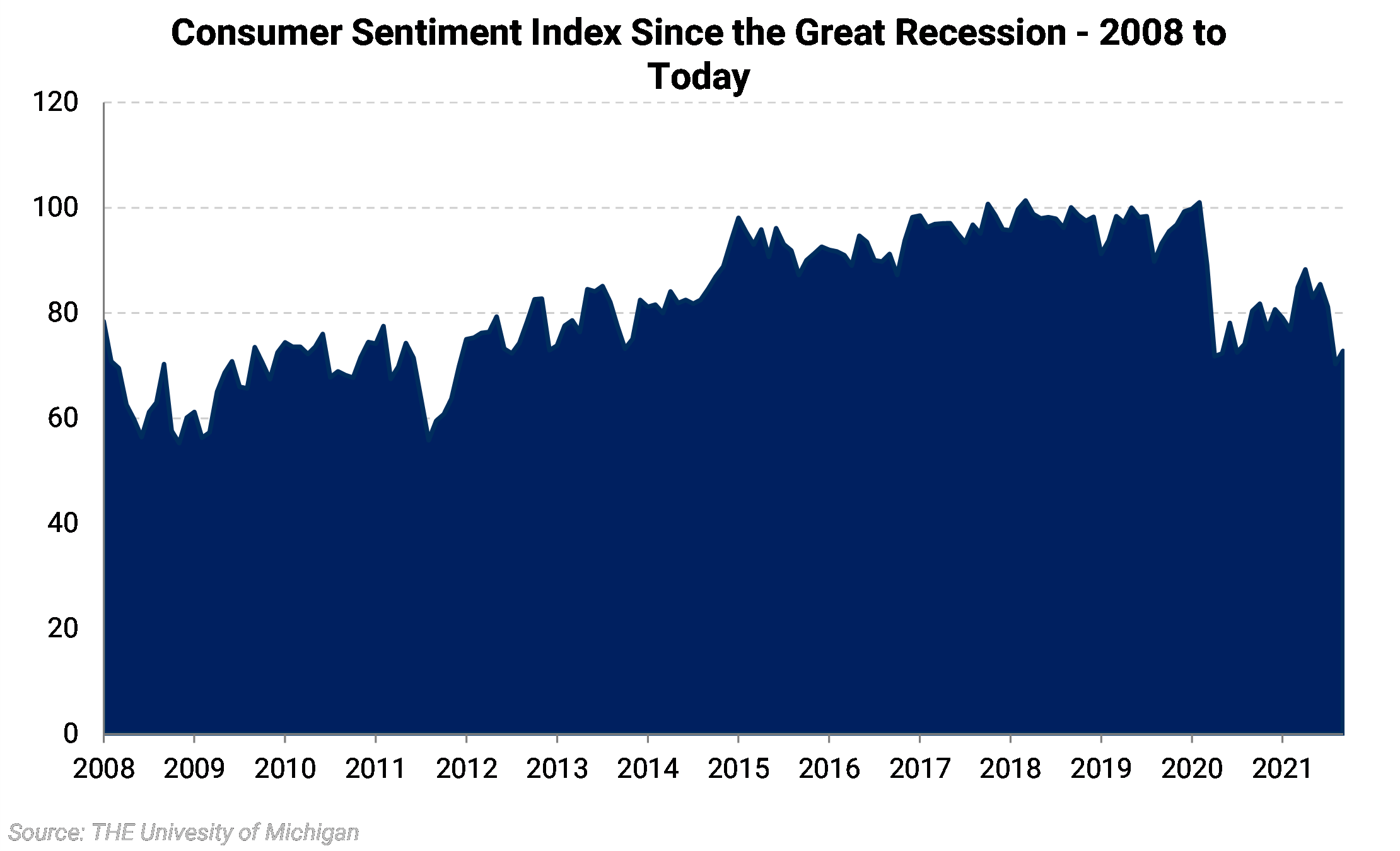 Despite declining consumer confidence, U.S. retail sales surprisingly increased last month in a broad advance, suggesting resilient demand for merchandise even as production constraints limit supply. The value of overall retail purchases increased 0.7% in September following an upwardly revised 0.9% gain in August. Excluding autos, sales advanced 0.8% in September. Retail sales were expected to decline in September by a median forecast of 0.2%. This surprise helped to push rates back up higher by two to five basis points (0.02% to 0.05%) across the Treasury and interest rate swap yield curves to end the week.