Real Problem if New Fiscal Package Starts with a "2"

U.S. markets were whipsawed this week by speculation over whether a fiscal stimulus deal would be reached, along with the news of President Trump's case of the coronavirus. Talks between Speaker Nancy Pelosi and Treasury Secretary Steven Mnuchin brought no immediate breakthrough on a deal for a new pandemic relief package, while the House prepared to vote on a Democrat-only plan. The two sides are still far apart on the total amount of stimulus and how it would be apportioned. Many of the same sticking points that have resulted in the current stalemate, including aid to state and local governments, remain.

House Democrats are currently sticking to a $2.2 trillion proposal, which is down from their original $3.4 trillion HEROES Act bill passed in May. Senate Majority Leader and Republican, Mitch McConnell, said the House plan was laden with "poison pills" that have nothing to do with pandemic relief. McConnell has held steadfast in insisting that any new Congressional spending package must remain under $2 trillion. Up to 20 Senate Republicans are calling for no new fiscal stimulus primarily based on their views of the strength of the current economic recovery.

Officials in both parties have questioned whether the differences could be bridged. The lack of progress in Wednesday and Thursday's talks dimmed optimism in financial markets about a stimulus deal. This, combined with heightened concerns stemming from an uptick in COVID-19 cases, including the late Thursday night news of President Trump's case of COVID, and the slowdown in employment gains, led to risk-off positioning that pushed equities basically back to unchanged levels, while short-term and long-terms rates have fallen from their weekly highs by 2 bps (0.02%) and 4 bps (0.04%), respectively. 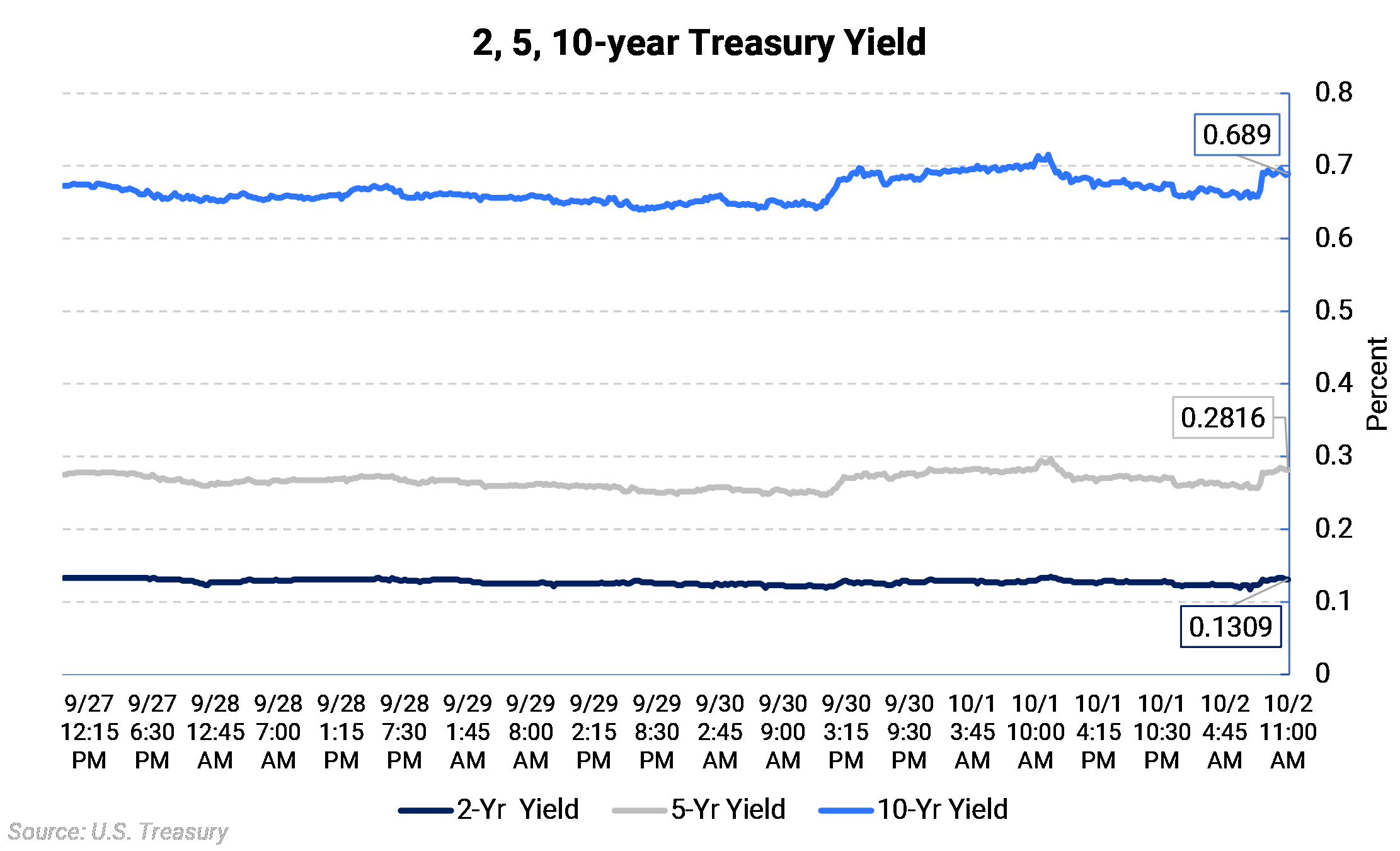 A key point of disagreement has been the Democrats' push for large-scale aid to local and state governments. Their plan released Monday has $436 billion for one year of assistance, less than a previous demand for $915 billion, which triggered scorn from Trump administration officials who called it a bailout for poorly run states. The plan also includes new aid for airlines, restaurants, and small businesses that was not in the original House package but which both sides want as part of any package. It also has more than double the amount they originally proposed for schools.

The Democratic-backed bill would also provide another round of $1,200 in direct relief payments to individuals and $500 per dependent, less than the $1,200 for dependents Democrats originally proposed. It would also reinstate the $600 per week in extra unemployment benefits through January 2021, the same amount that expired in July and helped disposable incomes surge even as the economy tipped into recession.

The negotiators are also stuck on an expanded tax break for businesses losses included in the bipartisan CARES Act legislation in March. Democrats have since said they oppose the tax write-off, which they say is a $160 billion giveaway to oil companies and real estate investors.

In contrast, Senate Republicans have offered a maximum of $1.6 trillion, some of which is covered by unused small business relief funds. That would include $400 a week in additional unemployment insurance, less than the $600 the Democrats want, but more than the $300 the White House has already put forward. The Republican package would also provide $250 billion in assistance to state and local governments, $100 billion more than a previous White House offer, but not as much as Democrats say is needed.

President Donald Trump has previously indicated he could accept the bipartisan proposal from the Problem Solvers Caucus (a bipartisan group in the House of Representatives that includes 50 members, equally divided between Democrats and Republicans, who seek to foster bipartisan cooperation on key policy issues). Trump's firm and public support will be necessary to get any agreement with Democrats on a stimulus through the Republican-controlled Senate.

The House is scheduled to leave Washington at the end of this week, though members will be on call to return if there is a stimulus vote. Most senators may leave after next week, with the exception of a late-October vote on the nomination of Amy Coney Barrett to the Supreme Court. They also could be called back if a deal is reached. Given their pending exit, House Democrats voted on, and passed, their $2.2 million relief package Thursday night despite the lack of a Congressional agreement, in a symbolic gesture to leverage prior to the November 3rd elections.

Although the White House has continued to express confidence that the economy is recovering, the pandemic continues to reverberate for companies and workers. In one of the biggest layoff announcements since COVID-19 caused widespread business shutdowns, Walt Disney said Tuesday that it will cut 28,000 workers in its slumping U.S. resort business. American Airlines began to furlough 19,000 employees on Thursday, while United Airlines Holdings is planning to cut more than 13,000 laborers.

Economists have increasingly abandoned predictions for a stimulus deal before the election, cutting their forecasts for growth in the remainder of the year as a consequence.

In the last nonfarm payroll and unemployment report before the election, payrolls rose by only 661,000 in September, while August was revised up to 1.49 million from its previously reported increase of 1.37 million. September's increase was below the median expected increase of up to nearly 1 million new payrolls for the month. 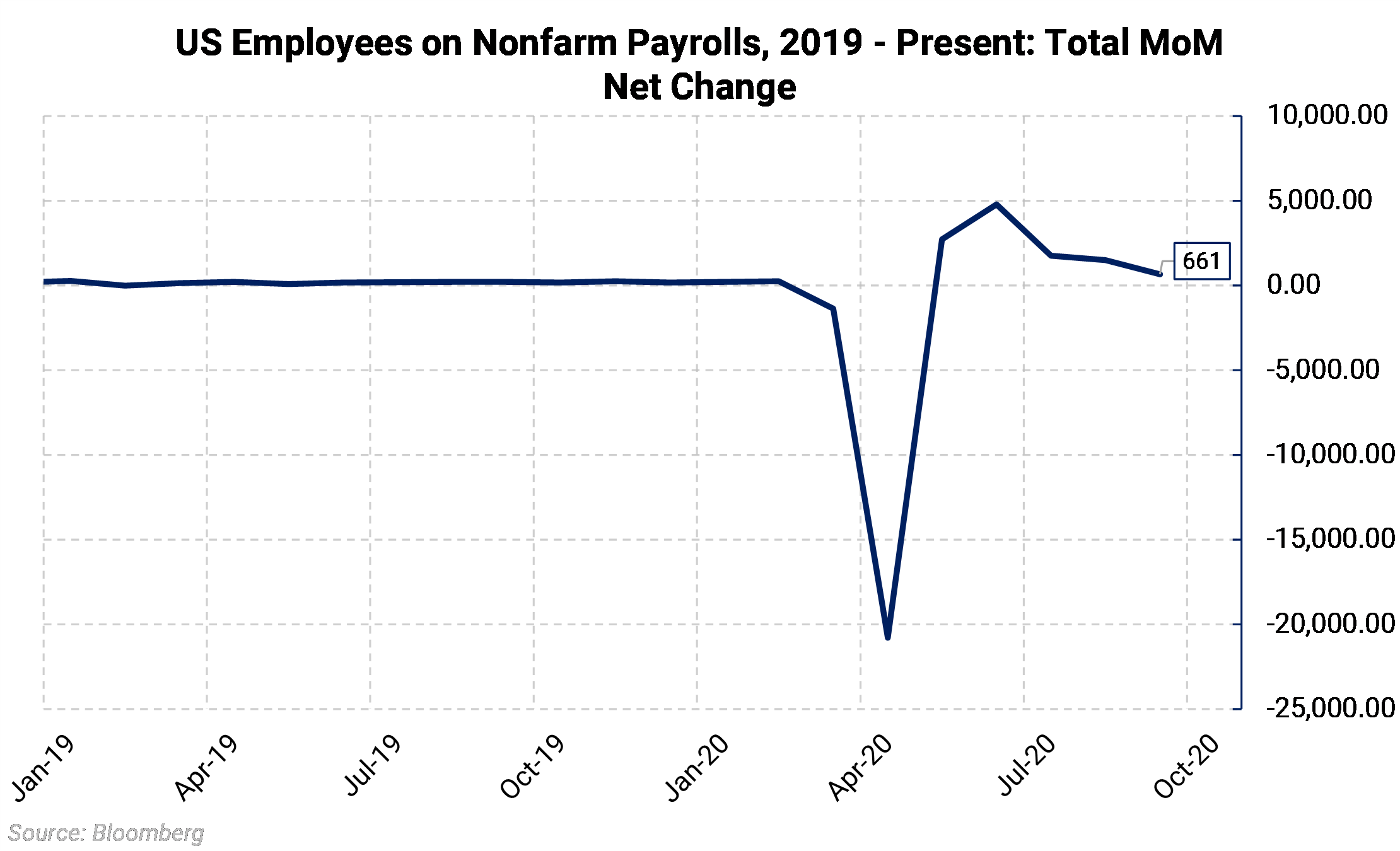 The unemployment rate fell to 7.9% in September versus its previous month's level of an unrevised 8.4%. Both the payrolls and the unemployment figures reflect an economy that is still recovering but at a continually slower pace, primarily as a result of waning fiscal stimulus.

An inordinately large number of people both gained jobs and lost jobs in September as workers that were on temporary furloughs were either re-employed or permanently unemployed, with the net balance leaning more towards permanent unemployment.

September saw a slowdown in retail and transportation jobs as those positions were among the first to snap back in the recovery over the previous months. The month also saw a large decline in government work, much of that made up of 2020 Census workers falling off the payrolls and local governments beginning to commence cutbacks in the face of pending deficits, especially without any additional federal fiscal relief.

As another sign of the significant disconnect between what is being displayed in the broad equity markets versus what is happening more locally on Main Street, it has been reported that 60% of all businesses that advertise on Yelp have, or will be, closing. For example, as many as 50% of New York City's restaurants are forecasted to be closed before the end of the year. See news on New York State's bond rating downgrade below.

The personal spending and income report on Thursday from the Commerce Department showed consumer spending rose 1.0% in August after increasing 1.5% in July, which was revised down from its previously reported increase of 1.9%. Economists had forecast consumer spending, which accounts for more than two-thirds of U.S. economic activity, advancing only 0.8% in August.

Personal income dropped 2.7% in August, reflecting a decrease in unemployment insurance benefits that ended in the previous month. The national $600 a week unemployment subsidy ended in July and was replaced by a $300 a week supplement, but only in certain states. The unemployment subsidies have helped to anchor consumer spending to date, but funding for the program has about run dry.

Consumers increased spending significantly over the summer, as they made up for purchases they put off during the spring. But the August boost to spending of 1%, while above expectations, was smaller than earlier in the summer when spending grew 9% in May, 7% in June, and a revised 1.5% in July. Spending on services, such as restaurant outings, hotels, and air travel, remains severely depressed. Air travel alone is down 70% from its pre-pandemic levels.

St. Louis Fed President breaks with the rest of the Fed, Chairman Powell

The U.S. economy should continue to recover from the coronavirus-induced recession even if Congress puts off consideration of additional fiscal stimulus to 2021, Federal Reserve Bank of St. Louis President James Bullard said Wednesday. This is in direct contrast of the continued pleas and recommendations of Federal Reserve Chairman Jerome Powell over the past several months in a multitude of verbal and written announcements.

"There may be enough resources right now, at least for 2020," Bullard said as part of a virtual question-and-answer period at the Fed's community banking conference hosted by the St. Louis bank. "It probably not so much hinges on whether Congress acts or not before the election here or after the election." He continued to add that "you could probably wait until next year and then you could assess the situation at that point and make a decision."

Bullard's view sets him apart from Fed Chair Powell and virtually every other Fed leader, many of whom have called for additional support to counter risk of a further setback in the recovery. Yet, Bullard said the $3 trillion in fiscal spending already appropriated by Congress in the spring has helped to offset the loss of output from the recession prompted by the virus, with the recovery so far happening faster than expected.

Bullard said the stimulus approved this year might not have been targeted perfectly and there have been some who have been left out, "but in a macro sense, I think there are plenty of resources there. Another thing you could do is possibly redirect resources that were already authorized in a way to get them to the right places that are most disrupted."

Bullard said huge layoffs announced by Walt Disney as well as by the airlines reflect the hardest-hit areas of the economy and that most businesses are holding up better.

New York State had its bond rating lowered one level by Moody's Investors Service ("Moody's"), the first such cut in 30 years, reflecting the impact of the coronavirus on New York City, the state's economic engine, and the Metropolitan Transportation Authority ("MTA"), the largest U.S. transit agency.

"While the public health response to the pandemic brought the city's infection rate down to among the lowest of big cities, the lasting economic consequences will likely be amongst the most severe in the nation and require significant fiscal adjustments by the city, the MTA, and the state," Moody's said in a news release Thursday.

New York has said it will have to cut $8 billion in aid to its cities and schools without more federal support.