Do you need to book an LNG vessel? Well, you are probably out of luck. Some shippers are unable to find vessels to load even after offering astronomical rates, according to Argus. It was reported that BP chartered a ship for about $350,000 per day, which was the most expensive commodity charter ever. The $350k sounds ridiculous; it equates to about $6.00/MMBtu by our estimate while the gas itself cost less than $3.00. Since landed Asian LNG prices are so high, a shipper can still make a healthy profit even with the high shipping cost - assuming they can find a ship to charter. The chart below breaks down our economic estimate for a possible spot cargo leaving the U.S. and selling into the northeast Asia market. 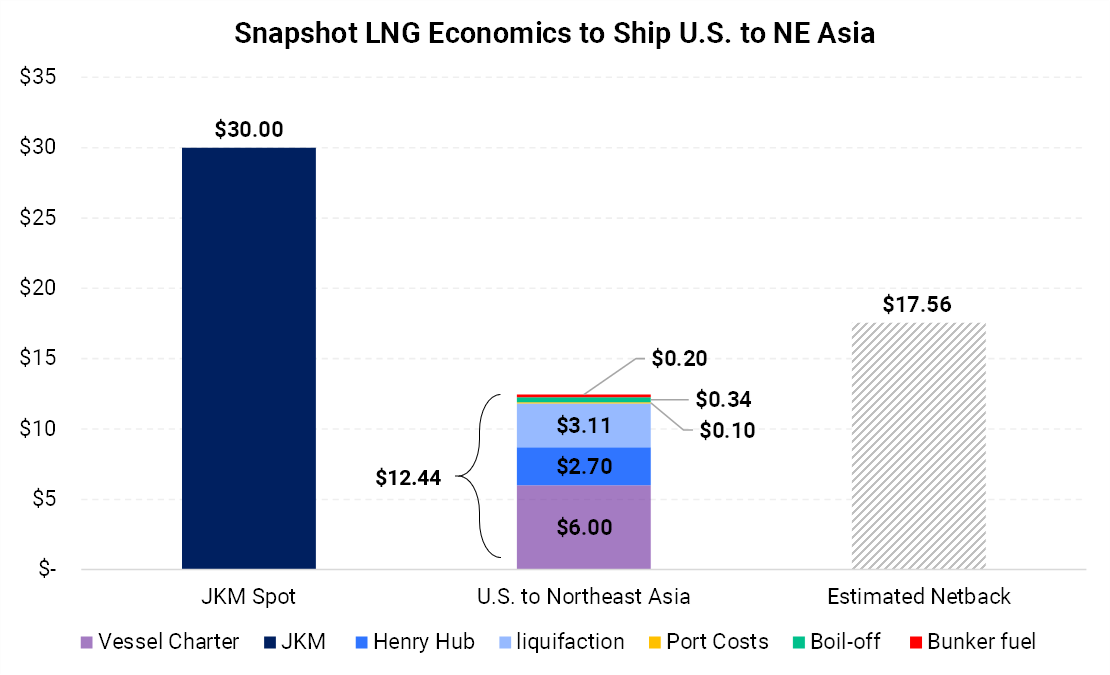 Source: Bloomberg, EIA, McKinsey, Cheniere, Wilhelmsen, Naturgy, AEGIS estimates Notes: Shipping cost in the example use the $350k/d BP charter example for a 60-day estimated voyage and 3.5 Bcf LNG vessel capacity. Liquefaction cost include an estimated fee from Cheniere. The above economic estimate is a broad estimate of fixed and variable cost and is not meant to show exact profitability of current transactions.

The above graphic shows an assessed Japan-Korea Marker (JKM) spot price reported by Platts on January 13. This likely isn't the price that most sellers are receiving but illustrates the price somebody did receive due to the dire need for gas in the region.

There are almost daily headlines of crazy high LNG shipping rates. The chart is meant to show that even with the record-high spot freight costs a shipper could make money.In addition to sky-high shipping costs, expensive NE Asian LNG prices are a function of record winter temperatures in the region, transportation bottlenecks, and supply outages.

Lower levels of LNG supply have contributed to the tightness in the global LNG market. Both Malaysia and Nigeria have been exporting at rates lower than capacity since late October, while other major LNG producers like the U.S., Russia, Qatar, and Australia have operated near or over capacity, according to S&P Global. Malaysia's Bintulu LNG export facility has faced production issues at multiple liquefaction trains, and upstream gas production in Indonesia is hampering LNG exports there. More recently, Chevron's Gorgon LNG has had issues that will keep the facility offline for several weeks as reported by the Financial Review.

AEGIS notes that the global LNG market has typically been in oversupply this year on a daily basis, but has recently experienced acute shortages as demand has soared in Asia and Europe. Global trading houses Vitol SA and Trafigura Group Ltd. estimate that the LNG market will likely remain in oversupply this year (after winter, of course), but will flip to market tightness beyond that.

Flow disruptions at the Panama Canal have helped cause higher prices in both the LPG and LNG market lately.

Shipping sources have said higher-than-usual LNG and LPG (liquefied petroleum gas, such as propane and butane) traffic has caused shipping delays across the Canal. The traffic has led to back-ups as shown in the map below.

There are many LNG vessels leaving the U.S. that are deciding to take the longer route around the Cape of Africa instead of the westbound Canal route in order to shorten the amount of days at sea. Vessels without a reserved slot at the Canal locks are sometimes having to wait an extra 10 days to get access through the Canal. At current shipping day rates, it's probably more economic to reach Asia via the longer eastern route.

Above - Selected vessels waiting to traverse the Panama Canal. Filtered for only Crude oil, LPG, and LNG tankers.

Does The U.S. Benefit From The High JKM Prices?

Its been almost a perfect storm of factors that have contributed to the headline-worthy LNG prices in NE Asia. Seeing some of the JKM prices, even in the forward market that are lower than spot market prices, can make a producer's mouth water.

Alas, Nymex natural gas price here in the U.S. is unable to directly benefit. LNG producers in the U.S. are already exporting near capacity at just above 11 Bcf/d, therefore, the U.S. can't further participate by increased sales. It needs additional LNG terminals that are not slated for in-service for years. The real winners have been those able to ship spot cargoes while the losers are those in the demand markets who are paying record prices for gas as a fuel for power.