4/21/2022: China rarely exports alumina; however, the country exported 9,949 mt of alumina to Russia last month, up from 104.5 mt in March 2021, according to China customs data and Reuters. Exports are small compared to total production; it exported 12,955 mt of alumina in March but produced over six million mt according to Reuters. Late last month, Bloomberg, citing anonymous traders, reported that China was testing “whether the cargoes face any logistics issues or problems with sanctions, with more ready to ship if all goes well.” Russia’s aluminum producer, Rusal, is currently having problems with sourcing alumina due to logistical issues from the Ukrainian conflict and Western sanctions.

4/1/2022: Due in part to the ongoing Russia-Ukraine conflict, aluminum had its biggest quarterly price gain since 1988. Logistical issues and Western sanctions have hampered Rusal’s ability to source bauxite and alumina. Bauxite is the ore that is refined into alumina, and alumina is then converted into aluminum.  Rusal’s alumina plant in southern Ukraine has been shuttered for employee safety concerns. Earlier this month, Australia banned exports of alumina and bauxite to Russia. Likewise, Rusal is currently unable to receive bauxite shipments from their mines in Guinea. Rusal, the largest aluminum producer outside of China, produced 3.76 million mt of aluminum last year, according to their 2021 operating results.

3/31/2022: Ore shipments from Rusal’s three bauxite mines in Guinea have “ground to a halt,” according to Reuters. Bauxite is the ore from which aluminum is produced.  Rusal has not commented on why shipments from the West African country have slowed. Some bauxite produced in Guinea is shipped to Rusal’s alumina plant in southern Ukraine; however, that plant is closed due to the ongoing conflict. No bauxite mines have been shut down, so ore is being stockpiled. The operations in Guinea represented approximately 50% of the company’s bauxite production, according to the 2021 operating results released yesterday. This slowdown in bauxite shipments compounds the problems Rusal is facing with sourcing input materials. Earlier this month, Australia banned exports of alumina and bauxite to Russia.

3/30/2022: Most LME metals finished lower yesterday on news that talks between Russia and Ukraine offered a potential pathway to a meeting between Vladimir Putin and Volodymyr Zelenskiy to resolve the war; however, markets are up slightly this morning after no breakthroughs occurred during today’s talks, according to Bloomberg. Aluminum 3M contract was down nearly 5% yesterday, settling at $3,436/mt, but has recovered about 3% this morning. Russia’s aluminum producer, Rusal, has had problems with sourcing inputs due to logistical issues due to the conflict. The company has not been sanctioned by any Western governments; however, importers have distanced themselves from Rusal and are beginning to source aluminum from other suppliers, according to mining.com.

3/29/2022: Early last week Australia banned exports of alumina, a key ingredient for aluminum production, to Russia, according to Reuters. At that time, it was unclear if the Rusal could access alumina produced from their Australian joint venture with Rio Tinto. However, anonymous sources cited by Bloomberg reported that Rusal cannot source alumina from the JV, nor ship or sell it elsewhere. It is currently unclear what will happen to Rusal’s portion of production. In 2020, Rusal’s portion of production was 740,000 mt, according to their annual report. This moves hurts both Rusal’s revenue potential and could also tighten the global aluminum supply chain.

3/28/2022: Chinese traders have sold 30,000 mt of alumina to Rusal in recent weeks, according to Bloomberg. Alumina, a key ingredient for aluminum production, is rarely exported from China as it is more profitable to use in domestic aluminum production. This modest tonnage was meant to “test whether the cargoes face any logistics issues or problems with sanctions, with more ready to ship if all goes well,” according to anonymous traders cited by Bloomberg. Rusal is currently having problems with sourcing alumina due to logistical issues from the Ukrainian conflict and Western sanctions.

3/23/2022: The LME will not abide by its own committee recommendation to ban Russian copper from LME warehouses. However, the exchange is in talks with several unnamed governments about whether it should continue to accept Russian deliveries into their warehouses, according to Bloomberg. Anonymous sources cited by Reuters claim that banning Russian metal “would exacerbate already tight supplies” and “a ban may also prove unlawful if no sanctions against producers are in place.” Based on recent LME data, nearly 12% of the LME’s aluminum in LME warehouses is Russian. Likewise, approximately 16% of nickel and 3% of copper in LME warehouses is of Russian branding.

3/14/2022: Late last week, Norilsk Nickel’s largest shareholder, Vladimir Potanin, stated that the company has found alternative palladium shipment routes. According to Potanin, the company used to do most palladium deliveries via air; however, most air routes have ceased due to sanctions on several Russian commercial airline companies. He did not specify what new shipment methods have emerged, nor any news regarding nickel shipments. Norilsk Nickel is the world’s largest palladium and refined nickel producer, according to Reuters.

3/11/2022: LME Aluminum 3M is down nearly $366/mt, or approximately 9.5%, this week, despite news that Oleg Deripaska, Rusal’s founder and largest shareholder of its parent company, EN+, was sanctioned by the UK government Thursday.

Rusal itself was not sanctioned; however, Western efforts to distance themselves from Russian companies could strain supplies of commodities such as aluminum. Importers are already beginning to source material from other suppliers, according to mining.com. One analyst cited by Bloomberg yesterday stated, “The fact that all these men are ‘under the gun’ makes dealing with their underlying companies all the more problematic.”

3/10/2022: Rusal’s export market might change in the coming years if it partners with Chinese aluminum producers. Early this week Bloomberg reported that several state-owned Chinese metals and energy companies are seeking stakes in major commodities firms, including Rusal.  Rusal is the largest aluminum producer outside of China. These potential ventures are meant to strengthen China’s energy and metals security, according to Bloomberg.

China already heavily relies on Russian aluminum. Last year, approximately 18.4% of China’s primary aluminum imports came from Russia, according to Chinese customs data. Similarly, approximately 7.5% of Rusal’s aluminum exports were shipped to China that year, based on Rusal and Chinese customs data.  Rusal’s exports to China might increase if a state-owned Chinese aluminum company invests in Rusal. However, this might have little effect on aluminum prices in the short term.

3/3/2022: MSC, Maersk, and CMA CGM, which are the world’s three largest container shipping companies, have all stopped booking shipments to and from Russia. Maersk handles “some” aluminum shipments for Rusal, also according to Reuters. Maersk’s most recent annual report does not detail Russian shipping volumes. Rusal is the largest aluminum producer outside of China, with 3.76 million mt of production in 2020 or about 5.7% of world production, according to S&P Global and USGS data.

3/2/2022: Several Ukrainian steel mills have temporarily shuttered production due to the ongoing war with Russia. Metinvest, which is Ukraine’s largest steelmaker, closed two plants (Ilyich and Azovstal) late last week due to safety concerns. These two plants represented 8.56 million mt, or 40% of Ukraine’s raw steel production in 2021. Likewise, ArcelorMittal has reduced production at one Ukrainian plant.

The country produced 21.4 million mt of raw steel in 2021, according to the International Iron and Steel Institute. In 2020, Ukraine was the world’s twelfth largest producer at 20.6 million mt, according to the USGS. Likewise, ArcelorMittal has reduced production at one Ukrainian plant. About 80% of Ukraine’s steel production is exported, with shipments mainly going to Middle East, Turkey, the EU, Africa and the Americas, according to S&P Global Platts.

2/25/2022: Yesterday afternoon, US President Biden announced sanctions on several large Russian banks and people closely aligned to Russian President Vladimir Putin; however, no sanctions against Russian aluminum producers were announced. In the weeks prior to the Russian invasion of Ukraine, White House officials had met with US aluminum industry representatives and at that time stated there was no plan to sanction Russian aluminum producers, according to Bloomberg. In 2020, Russia was the fifth-largest supplier of aluminum to the US, representing about 3% of our imports, according to the USGS. The US represented nearly 7% of Rusal’s (the state-owned aluminum producer) revenue in 2020, according to their annual report.

Similarly, no European allies have sanctioned Russian aluminum producers. Europe imports nearly 9% of their aluminum tubes and pipes from Russia, according to trendeconomy.com. Nearly 41% of Rusal’s revenue in 2020 came from Europe, according to their annual report. Rusal does not give regional volume breakdowns in their annual report, only revenue by region. Sanctions by either the US or Europe could jeopardize global supply and send LME prices and US or European premiums higher.

2/22/2022: Russian President Vladimir Putin has recognized two separatist, pro-Russian regions (Luhansk People's Republic and Donetsk People’s Republic) of eastern Ukraine as independent states. Putin also ordered troops into these regions.  US President Biden will sanction both regions, according to a press release by White House Press Secretary Jen Psaki. The EU and UK are preparing sanctions on Russia.  Both Donetsk and Luhansk are key strategic steel and iron ore production regions of Ukraine, as seven of the twelve steelmaking plants are in these two regions, according to UKRMETALURGPROM, Ukraine’s metals association. According to the association, in 2021 Ukraine produced 19.08 million mt of metal products of which to 15.12 million mt, or 79.2% was exported. In 2021, the main markets for Ukrainian steel products, were EU-27 (35.0%), other Europe (19.4%) and NAFTA (9.7%). Ukraine is the sixth-largest supplier of steel to the EU, according to the European Steel Association The most immediate effect of slower supply is on the European market, but the global nature of the steel market would likely force Europe's purchases into other regions. Loss of steel supply would test supply chains and prices beyond Europe. 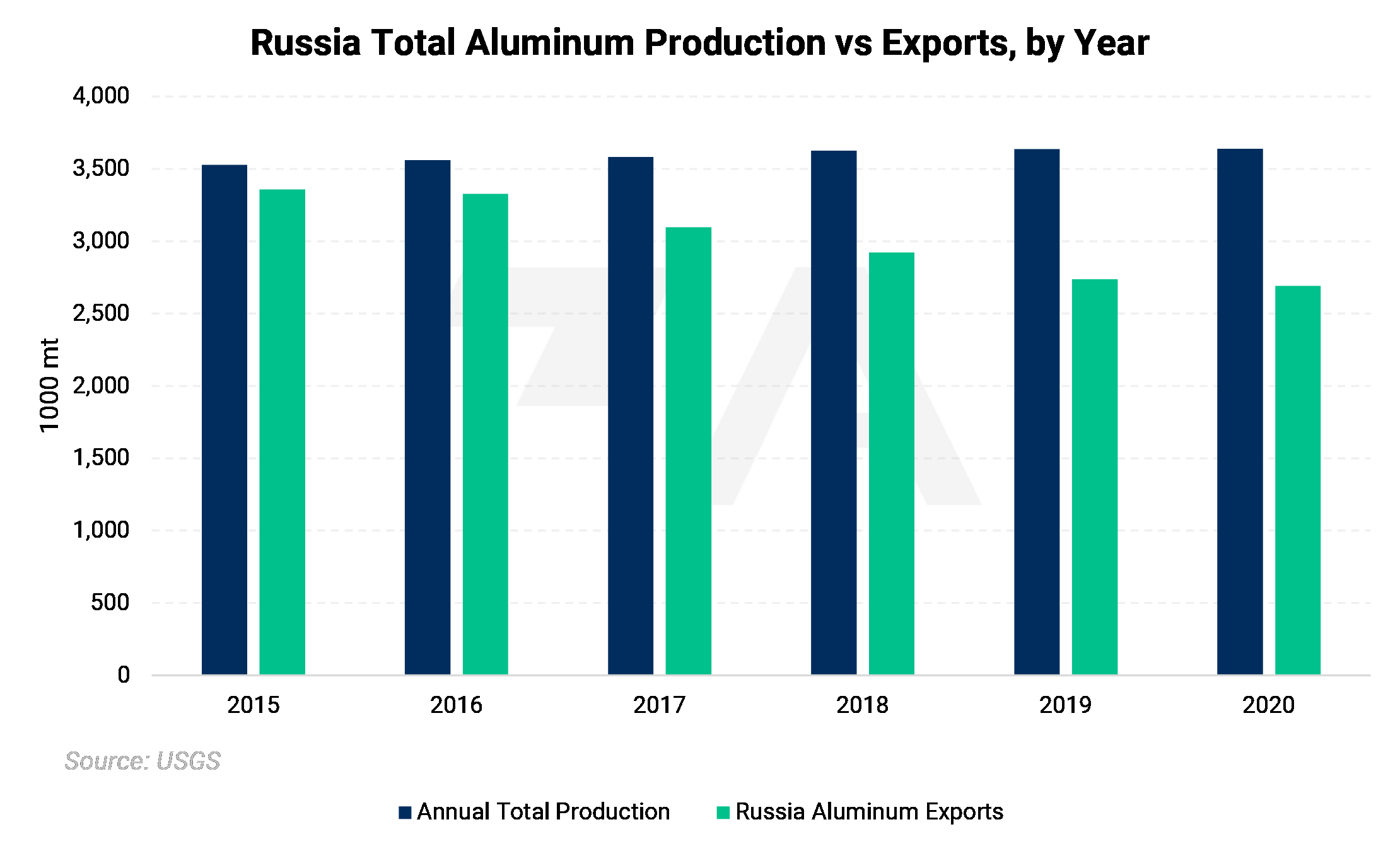