Nonfarm payrolls increased 467,000 in January in a broad-based advance that followed substantial upward revisions to the prior two months. December, which initially reported a gain of 199,000, climbed to 510,000. November swelled to a gain of 647,000 from the previously reported increase of 249,000 jobs. For these two months alone, the initial counts were revised up by 709,000 payrolls. Those changes brought the 2021 total increase in payrolls to 6.665 million, the biggest single-year gain in U.S. history. 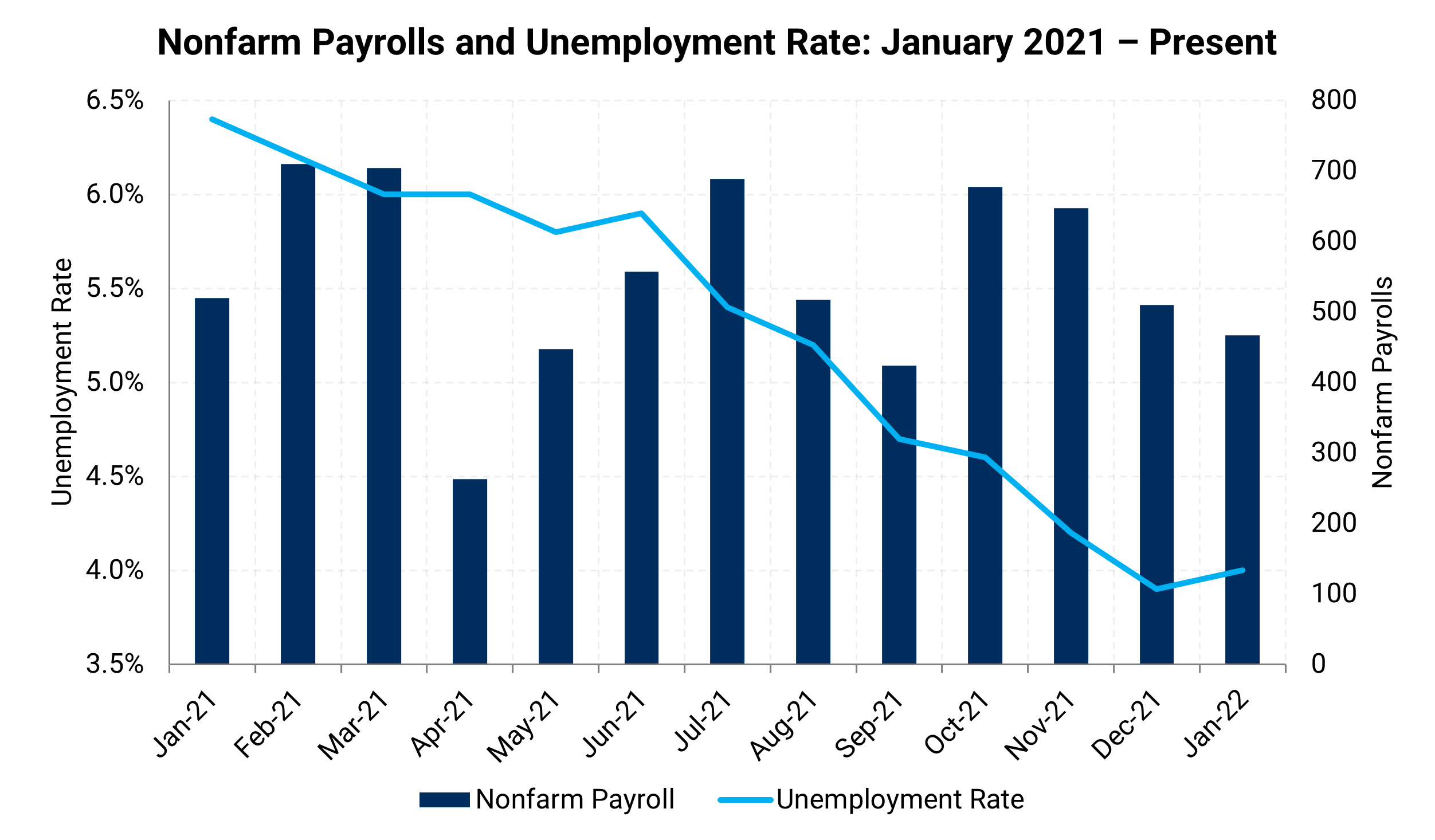 The median estimate among economists called for a range of a 125,000 to 150,000 advance in payrolls in January, though forecasts ranged widely. Some forecasts called for a decline of 400,000, primarily due to the assumed effects of the spread of the Omnicon variant of the coronavirus that sent workers to the sidelines.

The job gains were broad based, led by a 151,000 payroll expansion in the leisure and hospitality industries. The solid employment growth in several categories may reflect businesses choosing to retain more holiday workers than normal in the face of a tight labor market.

The number of people outside of the labor force dropped by more than 300,000. There was an increase of almost 200,000 in the number of unemployed. Hundreds of thousands of Americans have been pulled off the sidelines and are now looking for jobs, a very strong sign for economic growth.

The unemployment rate ticked up to 4.0%, and average hourly earnings surged. Average hourly earnings rose 0.7% in January and 5.7% from a year ago, further fanning concerns about the persistence of inflation. Unlike many other forms of price increases, wage inflation tends to be very sticky and is thus a major concern for the Fed. The rate of wage gains, however, still lags inflation, which was running around 7% in December as gauged by the consumer price index.

The surprise display of strength suggests the labor market continues to improve, despite the temporary disruption from record-high levels of coronavirus infections and the resulting absenteeism from work. The data further reinforce Fed Chairman Jerome Powell’s description last week of the labor market as “strong” and validate the central bank’s intention to raise interest rates in March to combat the highest inflation in nearly 40 years with much less concern on its possible effects on employment. Nevertheless, spiking wage inflation will make it more difficult for the Fed to gracefully engineer a soft landing.

Treasury yields, interest rate swap levels, and short-term borrowing rates all jumped following Friday’s employment report as investors began to price in the possibility of a sixth quarter-point boost by the end of this year, which is now a 51% probability. The bellwether ten-year Treasury yield is poised to break 2.00% and is now higher than before the COVID pandemic: 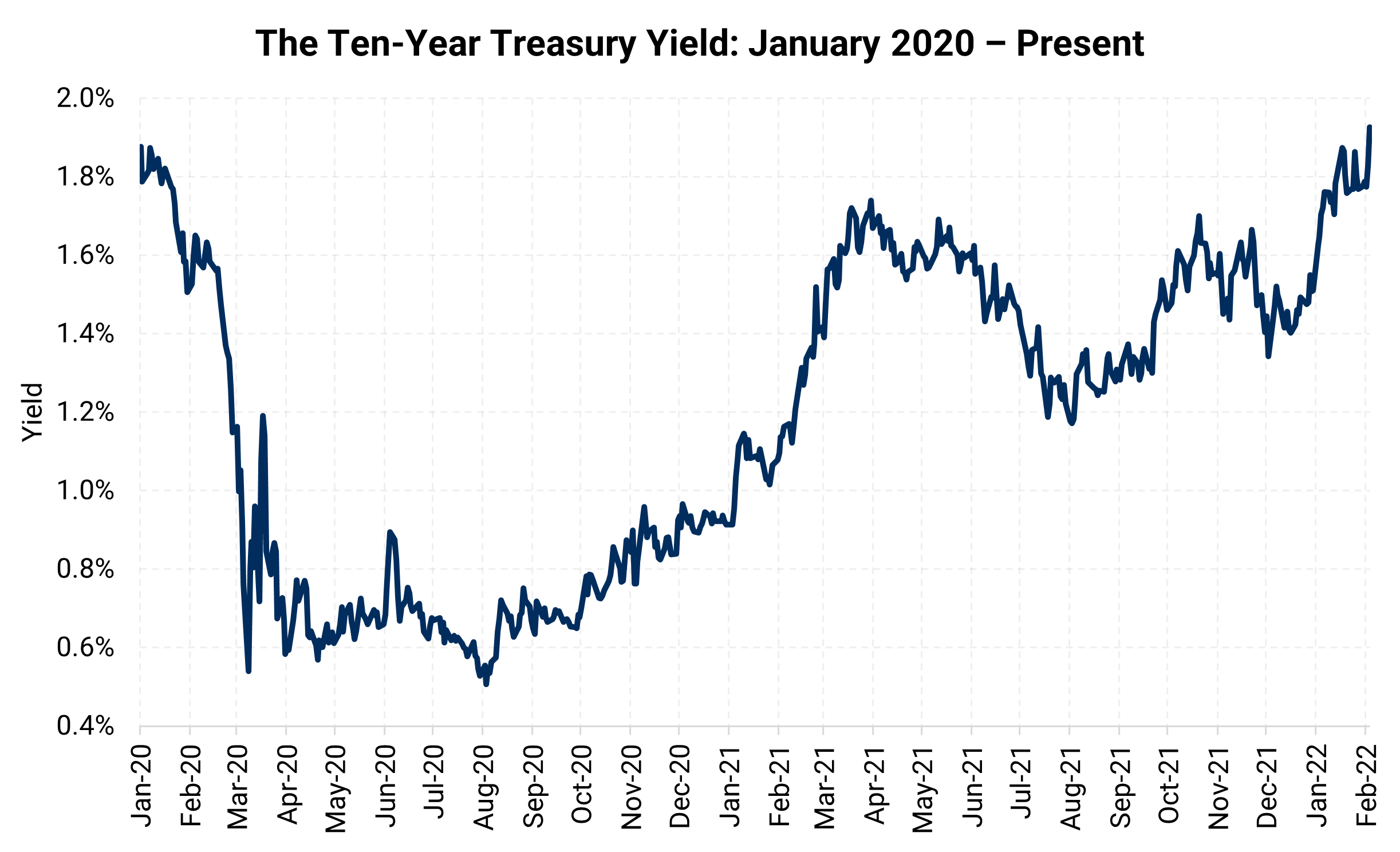 Spot three-month USD LIBOR has already almost fully incorporated an initial rate hike, rising nearly 25 bps alone since its low of 0.11413% in September. A March rate hike is now considered to be a sure bet, with the growing probability (now roughly at 27%) of it being a 50 bps hike (+0.50%) instead of an assumed standard 25 bps (0.25%).

Three-month LIBOR will soon break through the floor levels set in many variable rate loans, resulting in rising interest expense for floating borrowers.