Surprisingly Hawkish FOMC Meeting Causes Rates and the USD to Rise, Many Commodities to Fall

Off the Federal Reserve’s Federal Open Market Committee’s (“FOMC”) meeting minutes, along with the comments made by Federal Reserve Chairman Jerome Powell at the traditional post-meeting press conference (discussed in detail below), major shifts ensued this week across several markets.

By the end of the week, stocks fell for a fourth straight day, extending a bout of volatility ignited by the surprise hawkishness out of the Federal Reserve, in addition to the massive number of stock option expirations on Friday. The Dow Jones Industrial Average (“DJIA”) saw its worst week since January as investors stepped back from trades tied to expectations for hot economic growth and inflation. The tech-heavy Nasdaq 100 Index dropped from its record high.

Yields on shorter-maturity Treasuries jumped Friday after St. Louis Federal Reserve President James Bullard commented, beyond what was released from the FOMC minutes, that the central bank in fact has started discussing scaling back the pace of its pandemic bond-buying, or “tapering”.

Also in the wake of the FOMC meeting, most commodities slumped while the U.S. dollar touched a two-month high on higher interest rates.

Crop futures plunged Thursday across the board, with grains notching their worst rout in a dozen years.  Soybeans wiped out this year’s gains and grains lost more ground as better weather and uncertainty over the U.S. biofuel policy is eroded their bullish sentiment. A stretch of better weather across America’s farmlands, concern about the Biden administration’s biofuel rules, and fears of slowing U.S. hog exports are sending prices lower and raising questions on whether the recent rally to their multiyear highs peaked as they dropped the most in almost seven months. Corn, soybean oil, and canola futures all dropped by their respective exchange limit down circuit breakers. 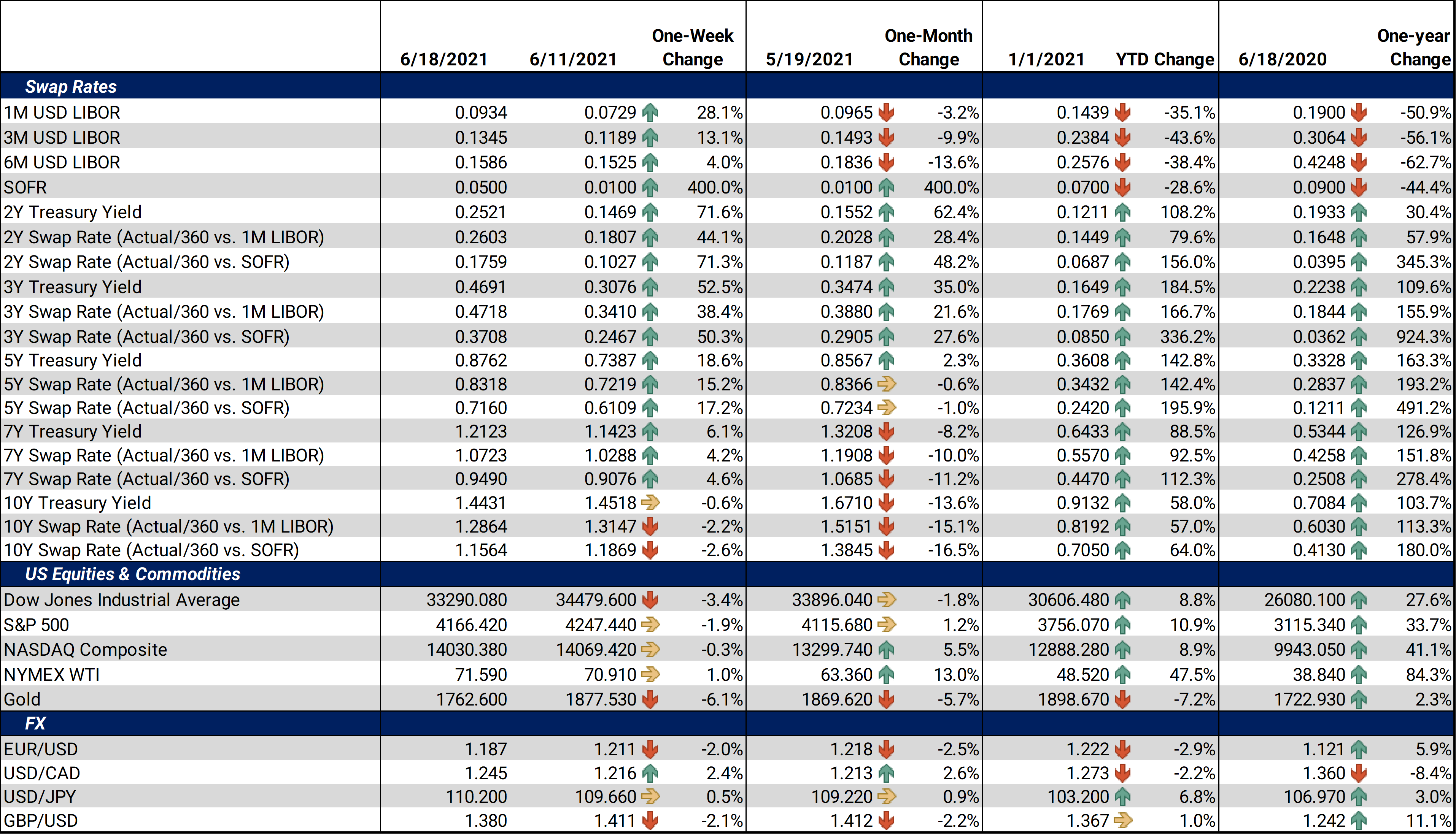 Dot plots are well known as the method that the FOMC uses to convey its benchmark federal funds interest rate outlook. At the committee’s meetings, the FOMC members place on a dot (17 of them at this most recent meeting) denoting their projections for future federal funds rates at year-end for the subsequent two years and in the more vague “longer term”.

Longer-term interest rates jumped ten to 13 basis points (0.10% to 0.13%) Wednesday as the FOMC dot plot shows the potential for rate increases in 2023, as well as possibility of a rate hike in 2022.  The market was caught off guard by the hawkish tone exhibited in the dot plot.  Also, the Fed will begin to discuss tapering at future FOMC meetings. Below is a summary of the FOMC meeting and the Fed Chairman Powell’s accompanying press conference.