To Stimulate or Not to Stimulate, That is the Question

No soap opera has had the daily twists and turns seen in American politics and markets over the past ten days. Market volatility has picked up while investors are whiplashed by the up and down talks over the next round of fiscal relief.

Last week finished with a swift rise in equities and interest rate yields on the hopes of a compromise on a new fiscal relief package, to an equally swift market reversal when the talks were scuttled, followed by President Donald Trump testing positive for COVID-19 and helicoptered to Walter Reed Medical Center where he tweeted the need for a stimulus compromise, oddly ending with a "Thank you." And it was only Saturday.

The workweek then started off on a positive tone with the president leaving the hospital, returning back to the White House, and the markets' hopes that a fiscal compromise could once again become reality, especially after the sobering scare put into the country with the president's illness and brief stay in the hospital, fueling renewed hope and optimism on a Congressional compromise.

As the world turned, these hopes were once again scuttled Tuesday after President Trump said he stopped talks with lawmakers on economic stimulus until after the election. Trump said after he wins reelection a "major" stimulus bill will be passed "that focuses on hardworking Americans and small business." This came on the same day Federal Reserve Chairman Jerome Powell pleaded for fiscal stimulus to be deployed in order to avoid permanent damage to the economy that could take years to correct.

Treasury yields tumbled with equity benchmarks shortly before 3pm E.T. Tuesday afternoon after this announcement by the president. Long-end yields led the move, flipping curve spreads to flatter from steeper on the day as markets priced in lower expectations for fourth-quarter growth. The yield curve had just steepened ahead of the ten- and 30-year auctions set for Wednesday and Thursday, respectively, bolstered by reflationary bets based in part on enthusiasm around fiscal stimulus. The S&P 500 Index closed the day 1.4% lower, with airline stocks and Boeing shares particularly taking a beating: 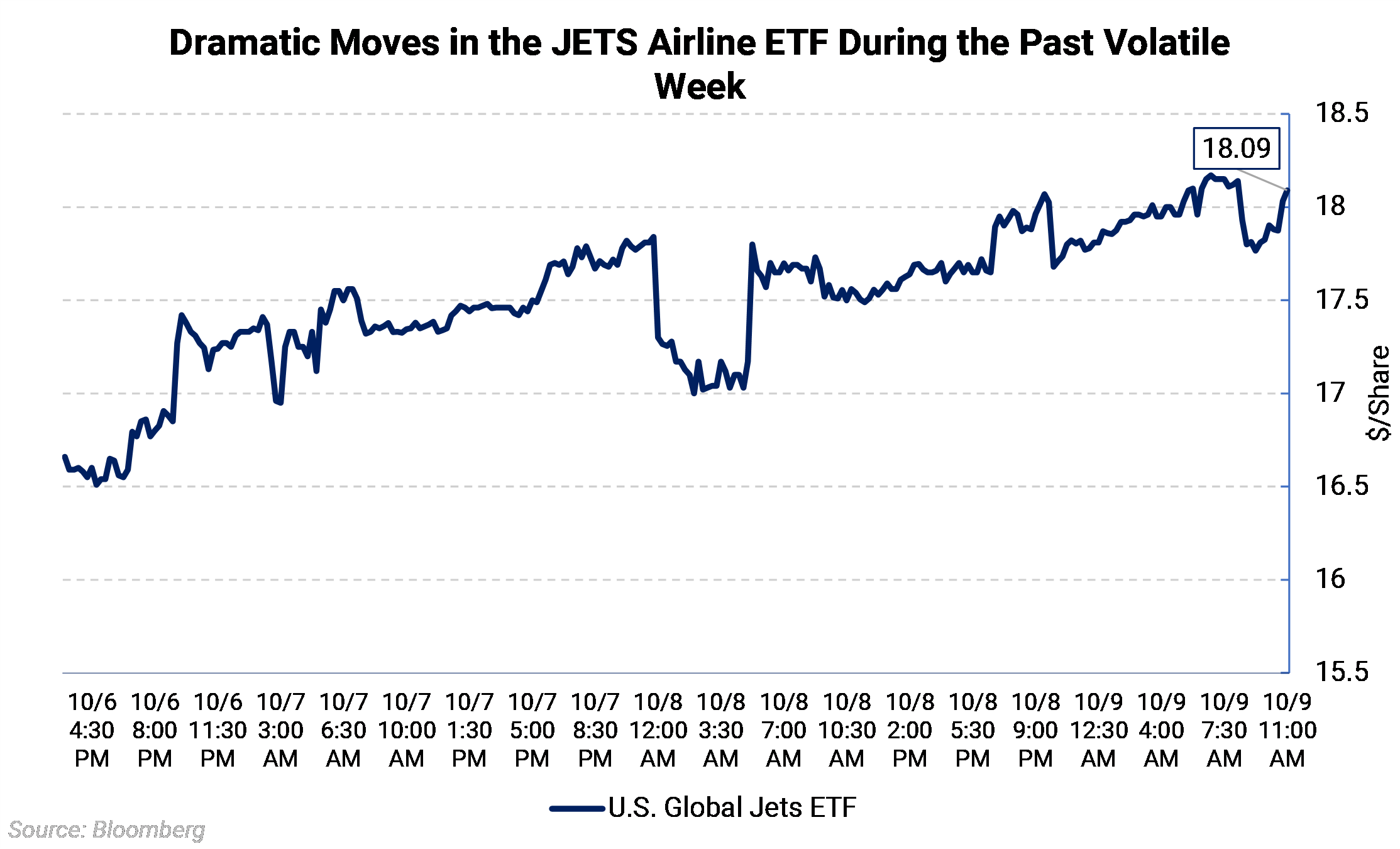 Then, in a pair of late-night tweets Tuesday, President Trump changed course on negotiating coronavirus relief that he had announced he was calling off earlier in the day. Stock futures and market interest rates rose after Trump called for a reduced group of stimulus payments, sending the ten-year yield to a high of 0.795% intraday Wednesday, its highest level since early June: 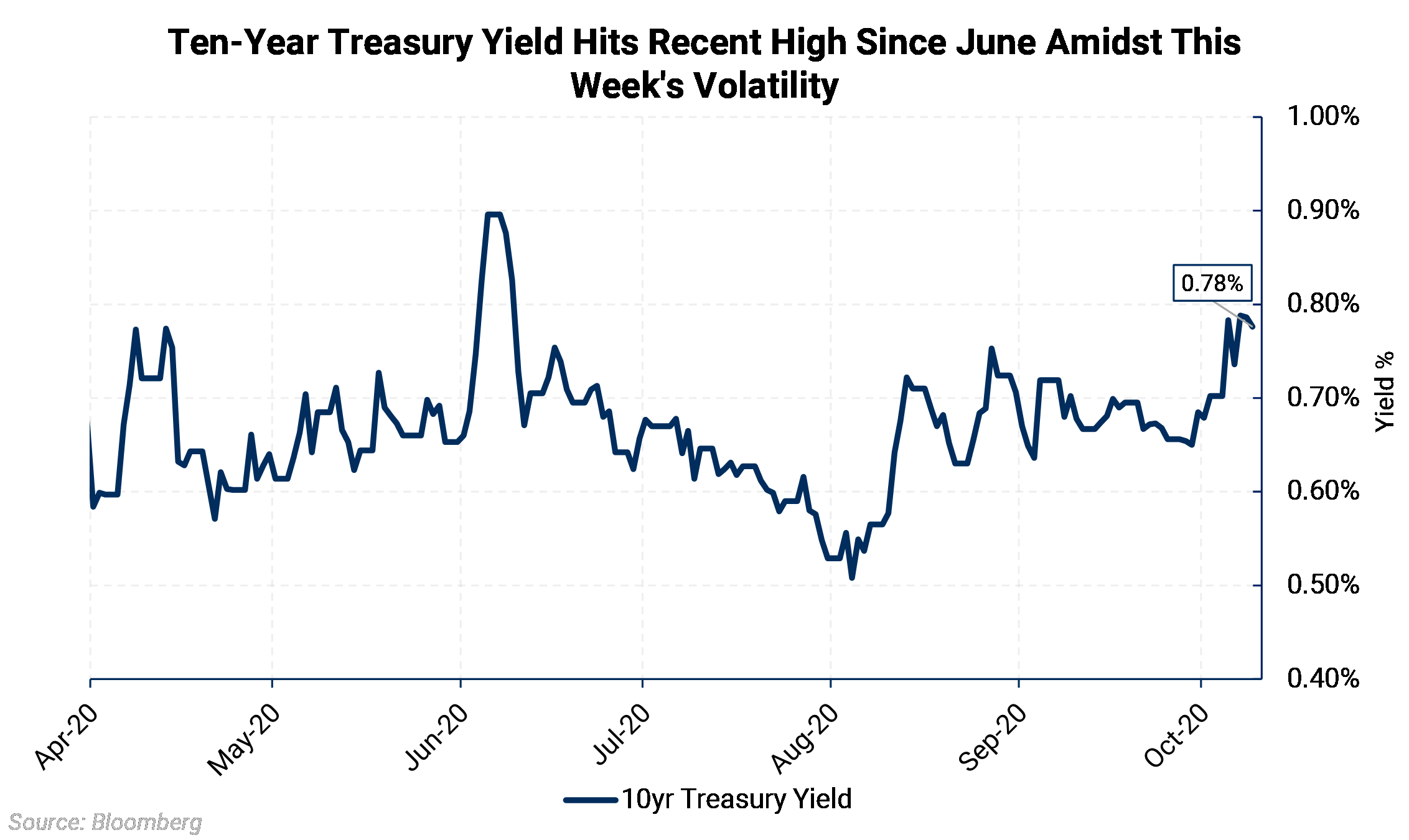 Trump wants targeted coronavirus relief, not a massive bailout, White House economic adviser Larry Kudlow stated Thursday. He further added that recovery does not depend on massive stimulus and that there was not enough time for a bigger package to be negotiated.

"The president believes we should shift into stand-alone bills to get the key points through," Kudlow said. "The big package had way too much spending and a whole bunch of things that had nothing to do with COVID or economic recovery." A V-shaped recovery is alive and well in the minds of Larry Kudlow, the White House, and Senate Republicans, as it certainly is with larger cap and tech stocks.

House Speaker Nancy Pelosi is dismissive of this piecemeal approach, telling Treasury Secretary Steven Mnuchin that the House will not do standalone bills without a guarantee the other stimulus items are going to be addressed.

Risk assets faded after Speaker Pelosi said the focus should be on a "serious, not a skinny, not an emaciated, but a serious bill" emphasizing that passing pieces of aid remains unlikely at least before the election, saying "there is no standalone bill without a bigger bill."

It seems a stretch to think that the House Democrats would be fans of signing any standalone stimulus measures heading into the election as it would erode one of the differentiating factors between them and the Republicans.

Pelosi and Mnuchin were expected to meet again Friday to see if there was any basis to restart negotiations given the widening gap between the House Democrats and the Senate Republicans' positions. These talks may be supported by President Trump as he once again changed his mind by Friday morning, stating that he was leaning toward a potentially "larger package". This awhile Pelosi pushes the House to introduce a bill to create a commission on the president's health based on provisions in the Constitution's 25th Amendment on Presidential Disability and Succession. Any such bill will merely be for political posturing ahead of the pending election as it would certainly be DOA in the Senate.

The number of Americans seeking unemployment benefits fell for a second week while remaining elevated, as the labor market makes scant progress amid risks of further weakness without additional federal stimulus.

Initial weekly jobless claims in regular state programs, one of the most closely watched indicators during these trying times, decreased by 9,000 to 840,000 in the week ended October 3rd, not enough to offset the prior week's figure that was revised higher by 12,000, Labor Department figures showed Thursday. Continuing claims, the total number of Americans on state benefit rolls, fell to 11 million in the week ended September 26th, a larger than expected drop: 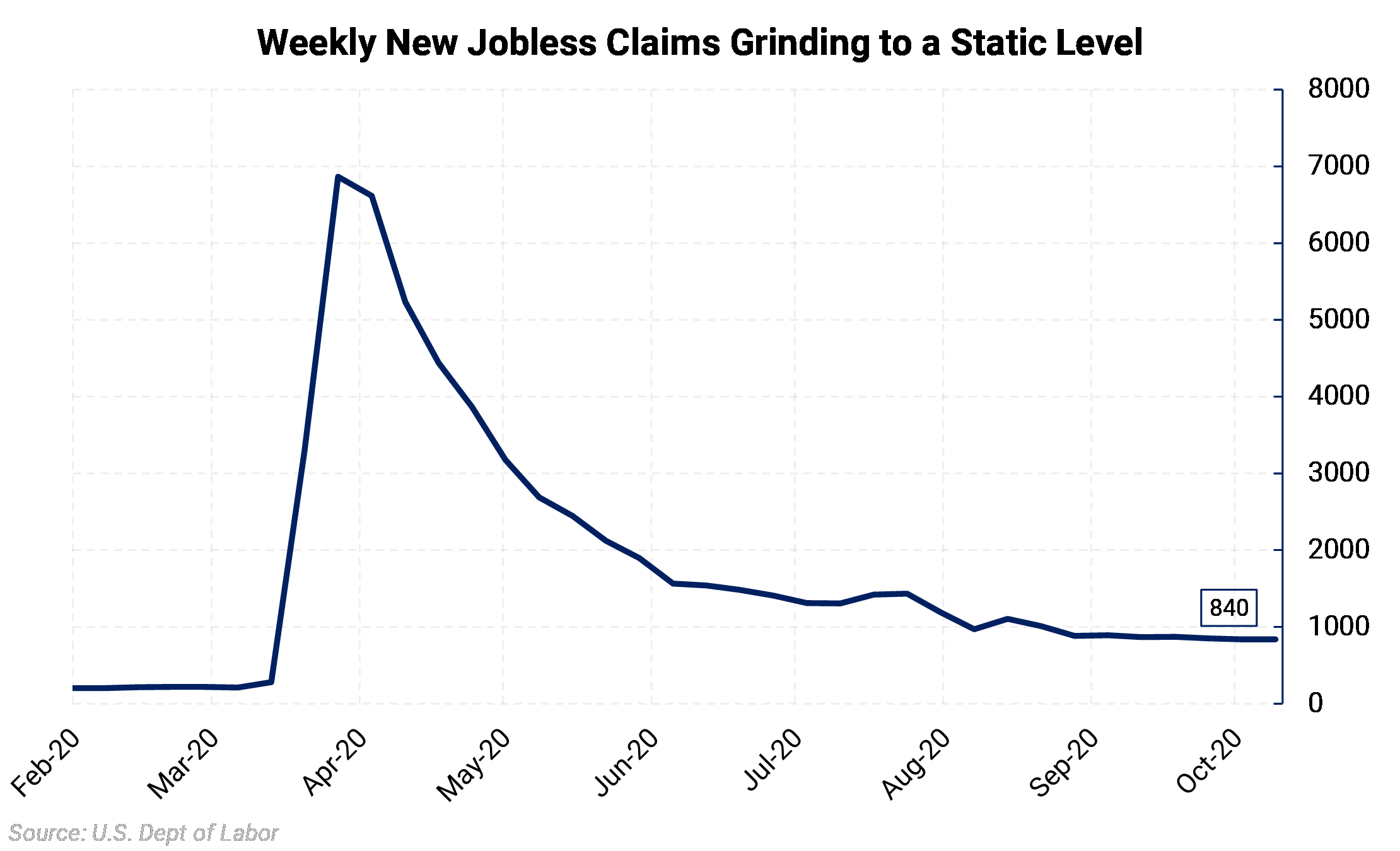 Even so, seven months into the pandemic, initial claims are still about four times the pre-virus level, and higher than the peak of the 2007-2009 recession. For the latest week, economists expected initial claims of 820,000 and for continuing claims of 11.4 million, according to median survey estimates.

The report came with the same major caveat as last week - the figures from California, the most populous state, used numbers identical to the previous week because the state temporarily halted acceptance of new applications for two weeks to improve its systems and address a backlog of filings.

The slight drop in new claims underscores the gradual improvement that the labor market has seen since the initial lockdowns of the pandemic eased. Even so, recent layoff announcements from companies including Walt Disney and Allstate as well as multiple airlines could start showing up in the numbers in the coming weeks.

At the same time, President Trump's mixed messages on additional federal stimulus have fueled more uncertainty across the world's largest economy as Fed Chair Jerome Powell warns it will face longer-lasting scars and a weak recovery without sufficient aid.

Even as filings are declining, levels remain extraordinarily high. Employment growth has already slowed and without fiscal support that protected jobs, risks are skewed to the downside for payrolls going forward.

Some confusion comes as unemployment persists. While continuing claims fell by 1 million, that could reflect recipients exhausting regular benefits and moving to state programs that provide extended benefits. Also, the number of Americans transitioning into Pandemic Emergency Unemployment Compensation, a federal program for people who have exhausted state benefits, increased by 153,700 to 1.96 million in the week ended September 19th.

The biggest increases in new unemployment claims were in Florida, Illinois, Virginia, and Massachusetts, which may reflect the cuts at major airline hubs.

The released September FOMC minutes show that the Fed was not unanimous on application of its new average inflation targeting. The September meeting was the first since the Fed announced its new framework which allows inflation to run above its historical 2% target.

The Fed clarified that "circumstances could arise in which the committee judged that it would be appropriate to change its guidance, particularly if risks emerged that could impede the attainment of its economic objectives." Despite the dissenting opinions, the general consensus remained that the U.S. economy is recovering faster than expected, with officials forecasting a lower unemployment rate. The minutes state the officials made their economic predictions with the assumption of additional fiscal aid, adding "if future fiscal support was significantly smaller or arrived significantly later than they expected, the pace of the recovery could be slower than anticipated."

In light of the fact that the value of the assets on the Fed's balance sheet increased by nearly 70% from $4 trillion to $7 trillion in two months earlier this year, it would be hard to describe Chairman Powell as some sort of reincarnation of Paul Volcker in the 1980s. For all practical purposes, it can be safe to assume that the Fed is "all-in," regardless of who eventually occupies 1600 Pennsylvania Avenue or the Senate for the foreseeable future.