Waha basis has been improving. Since the beginning of production losses in spring of 2020, and the installation of more pipeline capacity, the Permian basin's gas discounts have been shrinking. The basin has gone from having too much gas to dispose, to too much capacity to fill.

The current trajectory of Waha basis appears to be lower volatility and less chance (than in the past) to see extreme discounts to Henry Hub. A rise of oil development could change the story, but it would happen slowly. 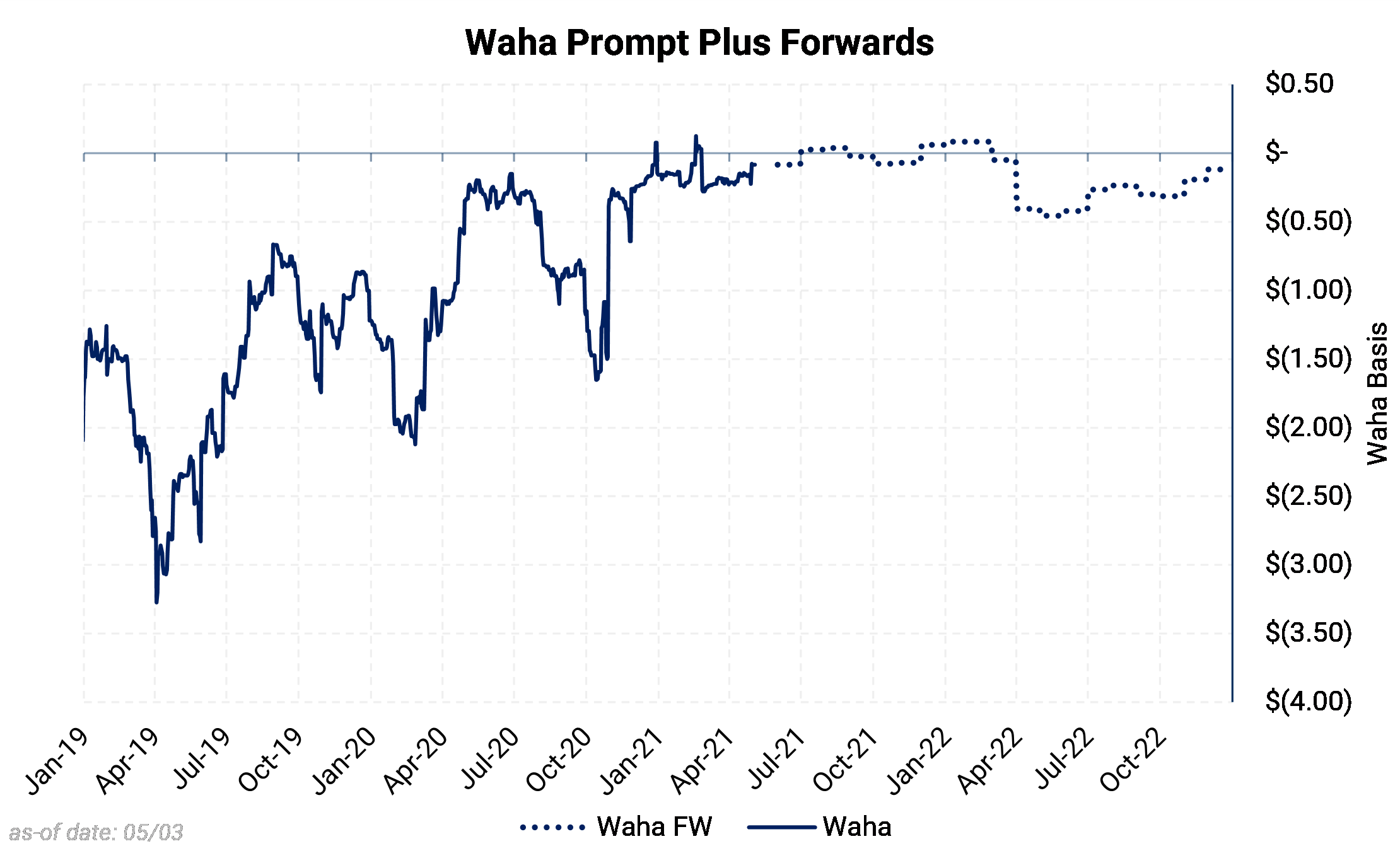 Waha is a locational (basis) gas market within the Permian basin of western Texas. Waha is a popular origin price for gas sold in the basin for transport to other markets. It is also a common part of producers' price formula for their natural gas and, sometimes, NGLs, especially ethane. 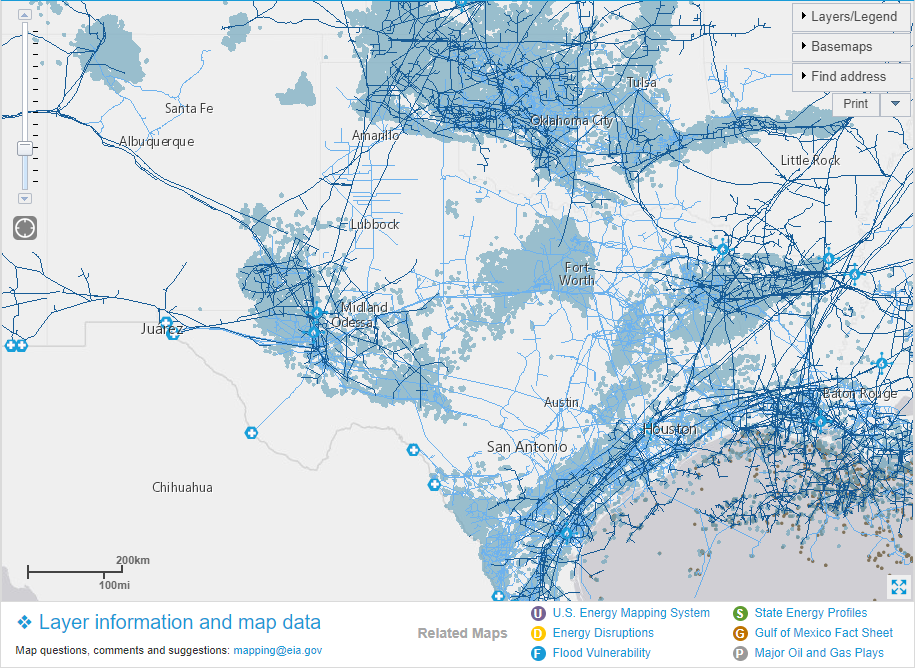 Waha is in the Permian basin, and is characterized as a market that is perpetually long supply, and needs to trade at a discount to its marginal demand market. That demand market is almost always outside of the Permian basin. Therefore, basis is determined by the amount of excess gas that needs to be moved to another location. The relative abundance or scarcity of this egress capacity influences Waha basis greatly.

West Texas gas production comes mostly from associated gas from oil-directed wells. Since spring 2020, less associated-gas output has led to a stable production rate of 13.35 Bcf/d (Mar '21 avg.) out of the Permian, down from around 14.8 Bcf/d in 4Q2019.

Production growth at recent prices (February 17, 2021 in our case), shows that gas production could escalate if producers show the same propensity to drill wells as they have in the past. However, it is doubtful this is the case. Lower land values, an emphasis on returning profits to equity owners, and less availability of capital are likely restrictive.

If production remains roughly unchanged — within 1 Bcf/d or so — then production in the basin is not likely to fill the available and planned pipeline capacity exiting the basin. 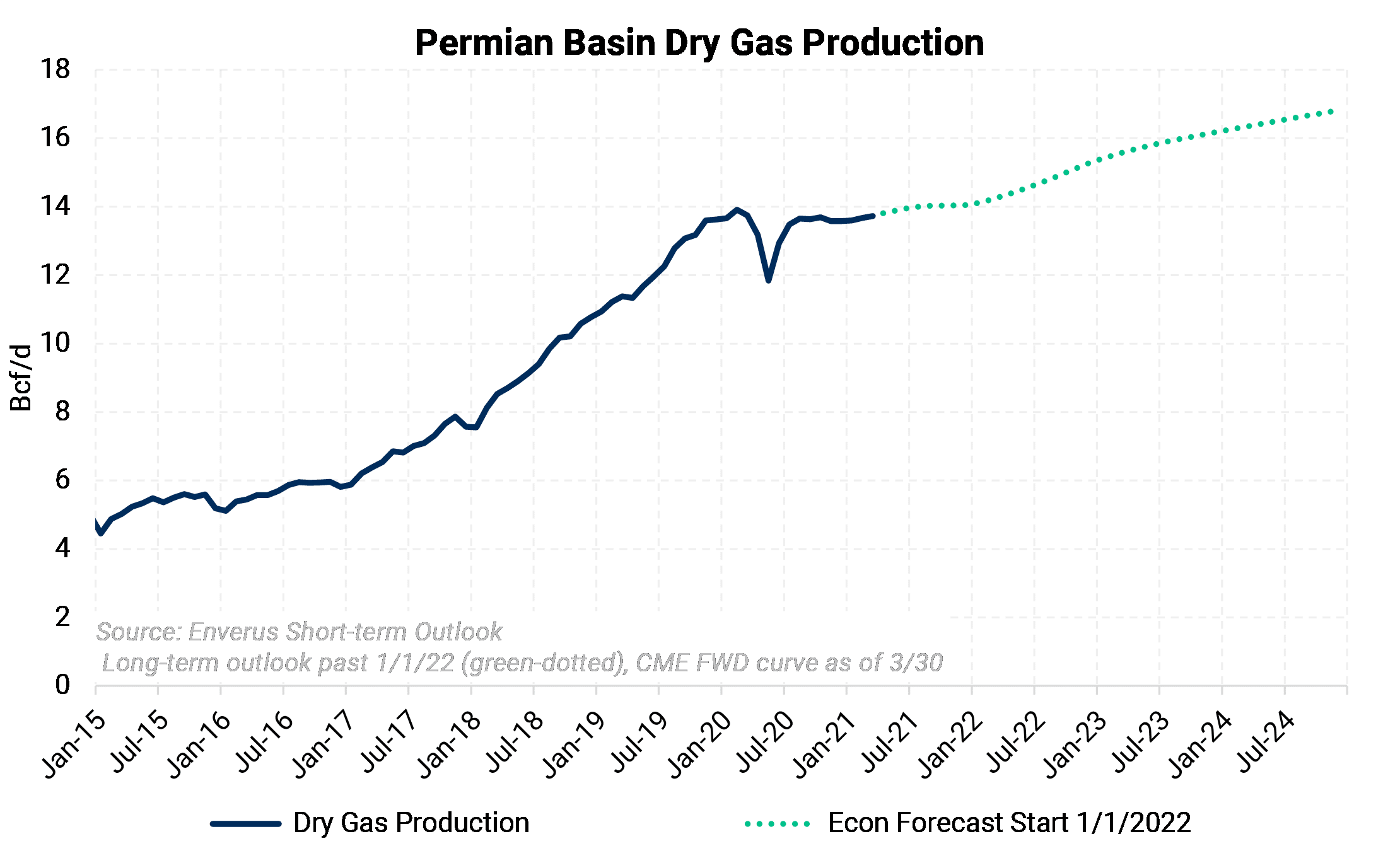 The production forecast scenario above assumes producers will show the same willingness to drill new wells as they had in the past at similar price levels for oil and gas.

Local consumption of natural gas at or near the Waha point is small. Although there is some local population and heating demand, most consumption that could be considered "local" is to feed gas-fired power plants. This power is then mostly transmitted to other population centers within Texas and the ERCoT footprint.

In the last several years, gas production has outgrown power-load growth by many multiples. Therefore, there has been more excess gas in the Permian basin, sold into or near the Waha basis location.

Very little commercial gas storage is available in the Permian basin. It serves a minor role in the supply-demand balance. As a general rule, gas that is produced on one day must either be consumed on that day or be placed in a pipeline for transport that day. This phenomenon can add to daily volatility in Permian cash basis, but its effect on forward (future) basis is not as important.

After local demand is satisfied, additional supply must be sent to markets outside the Permian basin. When outbound capacity is insufficient, basis falls. When capacity exceeds the amount of gas, then basis rises.

One growing market for gas has been Mexico. Two large pipelines connect the Waha hub with markets in north-central Mexico. From there, the pipeline network within the country connects to end users and power plants. Mexico has been taking more Texas gas in the last several years as infrastructure is built within the country.

Permian Highway Pipeline: The Permian Highway Pipeline (PHP) Project will provide an outlet for increased natural gas production from the Permian Basin in West Texas to growing market areas along the Texas Gulf Coast. PHP is designed to transport up to 2.1 billion cubic feet per day (Bcf/d) of natural gas through approximately 430 miles of 42-inch pipeline from the Waha area in Texas to the U.S. Gulf Coast and Mexico markets. The project was placed in service in January 2021.

Whistler Pipeline: Whistler pipeline is an approximately 450-mile, 2 Bcf/d, 42-inch intrastate pipeline (Whistler Mainline) that will transport natural gas from an interconnect with the Waha Header near Coyanosa, TX in the Permian Basin to a terminus near Agua Dulce, TX, providing direct access to South Texas markets and consumers. The project currently has an in-service date of 3Q 2021.

In addition to Waha, the El Paso Permian basis point is a popular pricing location for much Permian-basin gas. It is geographically near Waha, is connected to several of the same gas pipelines, and has a high correlation to Waha basis.

Q. What is the liquidity of the Waha forward curve?

AEGIS A: Like many basis locations, forward liquidity is not as good as the benchmark, NYMEX Natural Gas. However, as basis markets go, Waha is among the better ones. Patience may be required to work larger orders past 12 months into the curve. AEGIS has relationships with (likely) all the counterparties who financially trade Waha. Therefore, we can assess liquidity in the moment and determine whether quick execution might incur an embedded penalty.