Gas basis prices in the Permian Basin have moved lower over the past 12 months. Further price deterioration depends on the actual and perceived pace of gas-production growth. Pipeline constraints could happen as early as mid-2023 under strong production growth, or, in late 2024 if growth is slower. Waha price action strongly implies that more pipelines will soon be needed to dispose of the newly produced gas. 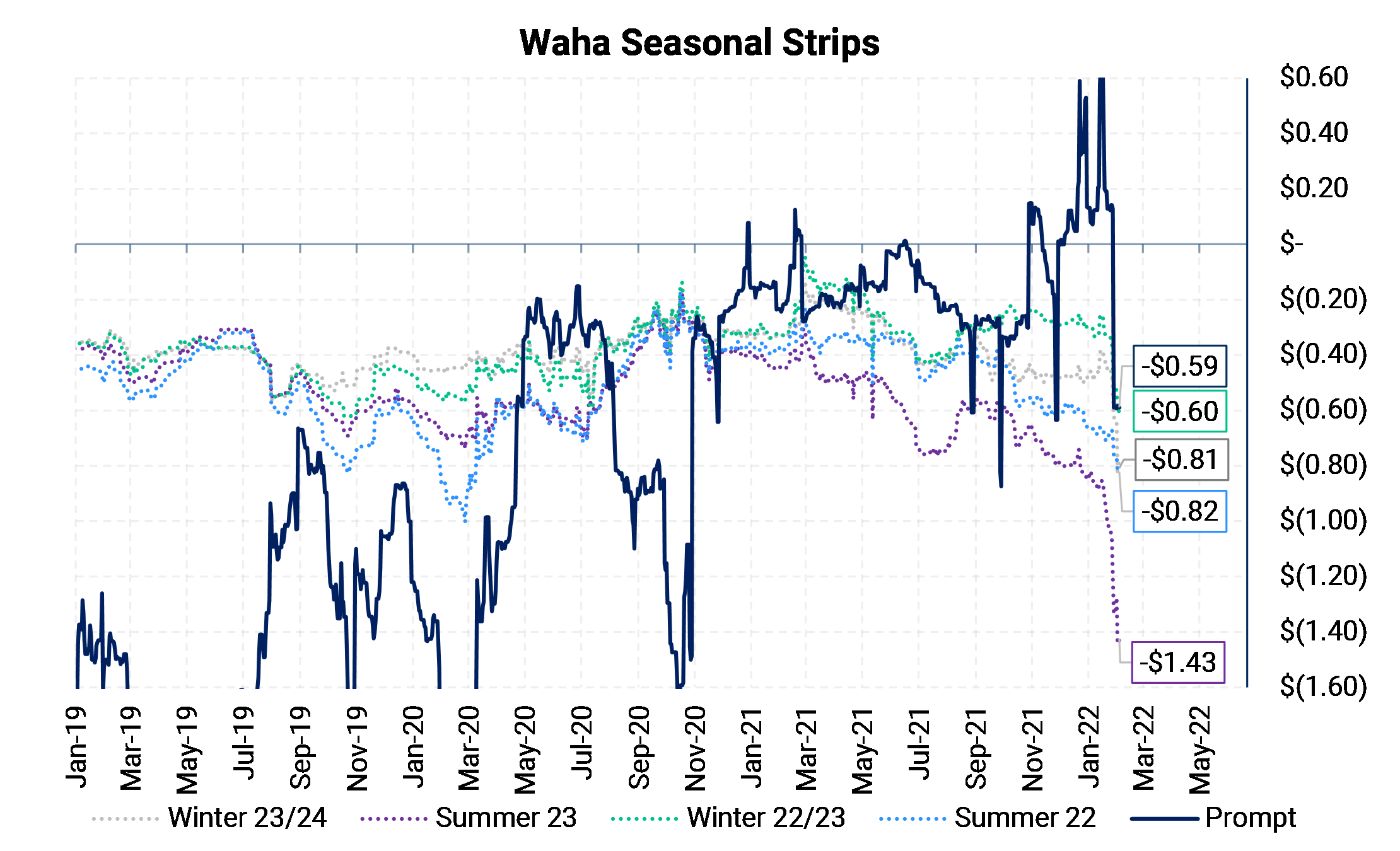 The chart above shows how Waha basis (discount to Henry Hub) has evolved. The dark blue line is near-term, or prompt-month basis. The other lines are averages of different parts of the Waha basis forward curve. Most notable is Summer 2023, which has lost almost 50c in the last few weeks.

At the beginning of 2021, the Waha forward curve as a whole was trading near the smallest discount to Henry Hub in many years. The smaller discount was due to ample, new egress capacity combined with a production slowdown due to the pandemic’s effect on the oil industry. Now, the deterioration in some Waha basis tenors suggests a new showdown between limited pipe capacity and new production.

Future Permian gas constraints are top-of-mind for many Permian producers. The Waha curve has continued to see selling pressure in the last year, especially recently for the Summer 2023 strip. Many analysts expect next summer to be at risk of pipeline constraints. Further, as more operators are concerned about moving gas next year, their hedging has likely created a lopsided trade as many sellers (producers) move to de-risk (sell) their basis exposure. 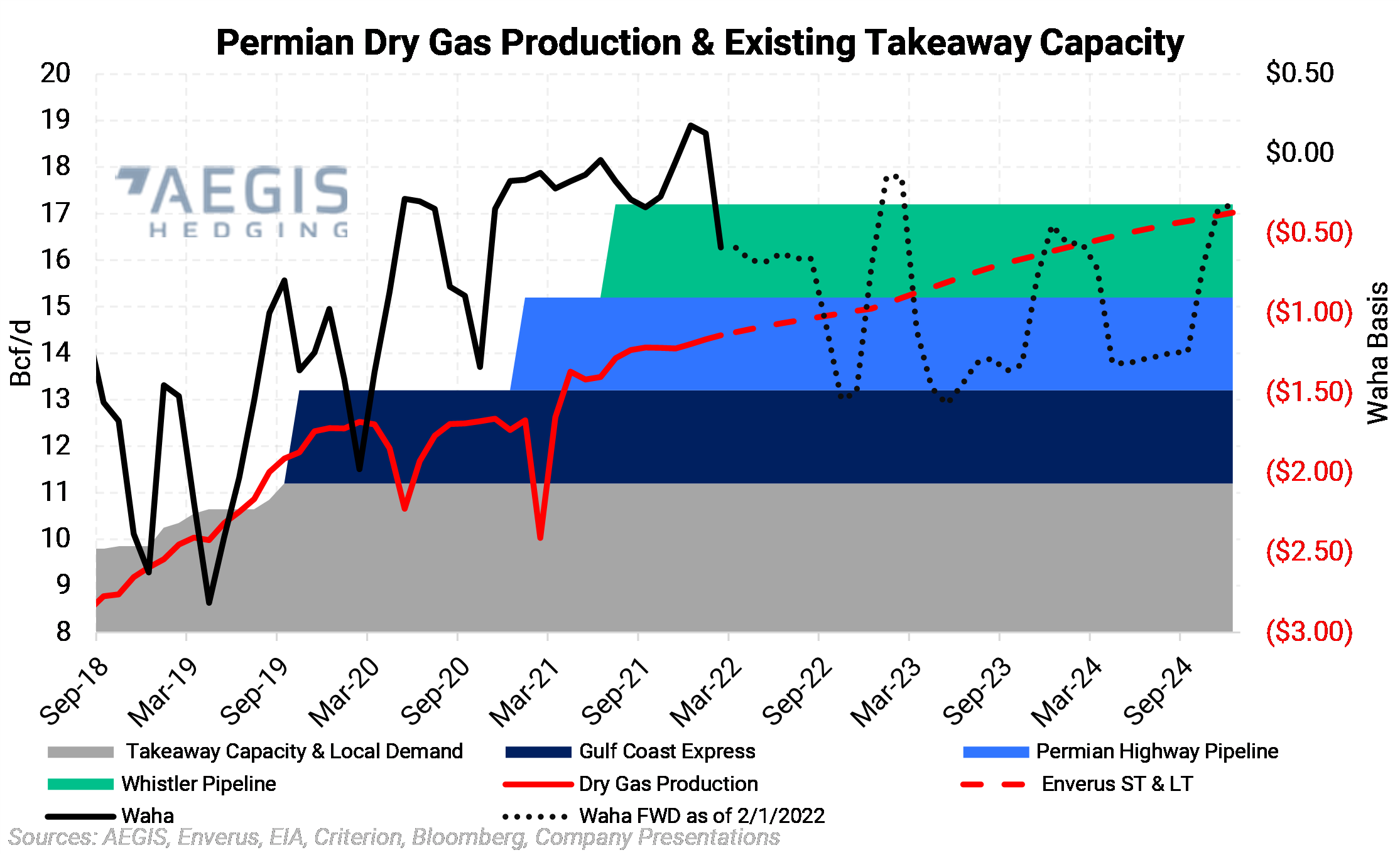 Dry-gas production has since picked back up as drillers have added 101 more rigs in the Permian over the past year, to reach 293 rigs operating, according to data from Baker Hughes. This implies operators are trying to grow production; forecasted production growth has producers getting flashbacks of flaring, pipe constraints, and negative Waha pricing. The massive pipeline build-out over the past two and half years has been beneficial, but it may not be enough to serve all production growth in the next 18-24 months.

The chart above demonstrates the problem. Pipeline capacity additions are shown in the stacked area, while the red line shows production, which currently fits below total pipe capacity. The chart shows the addition of the three recent 2 Bcf/d pipelines that were added in the past few years. The latest of the three was Whistler which came online last summer.

Looking forward, dry gas production is expected to grow by 2 Bcf/d over 24 months, per a company-guidance model from Enverus. Recent public-company production guidance implies low growth. If companies respond to currently high oil and gas prices by drilling more wells, then in 2023, growth would be much more robust.  Some analysts expect producers to be unable or unwilling to accelerate production. If they’re correct, then pipeline capacity would last longer before filling.

The bottom line is that the Permian likely experiences a new constraint sometime in 2023 or 2024. As of early February, there have only been two pipeline expansions or new-build projects proposed by midstream companies. MPLX announced on February 2 that its 2 Bcf/d Whistler Pipeline, which sends gas from West Texas to the Agua Dulce Hub in South Texas, could be expanded by 0.5 Bcf/d. The company said capacity could be available by “late 2023” at the earliest. In late January, during its earnings call, Kinder Morgan said that it’s likely the Permian will need a new pipeline. The company said it was in talks with customers to possibly add a pipe and the time frames as early as late 2023; however, nothing has been formalized.

If hedging this exposure is in your plans, contact the AEGIS desk to explore whether hedging Waha basis is risk reducing and beneficial to your portfolio.

Commodity interest trading involves risk and, therefore, is not appropriate for all persons; failure to manage commercial risk by engaging in some form of hedging also involves risk. Past performance is not necessarily indicative of future results. There is no guarantee that hedge program objectives will be achieved. No representation is being made that any client will or is likely to achieve hedge profits similar to those discussed in this article. Certain information contained in this article may constitute forward-looking statements, which can be identified by the use of forward-looking terminology such as ‘edge,’ ‘advantage,’ ‘opportunity,’ ‘believe’ or other variations thereon or comparable terminology. Such statements are not guarantees of future performance or activities. Neither this trading advisor nor any of its trading principals offer a trading program to clients, nor do they propose guiding or directing a commodity interest account for any client based on any such trading program.​ This article is not required to be and has not been, filed with the commodity futures trading commission ("CFTC"). The CFTC does not pass upon the adequacy or accuracy of this commodity trading advisor disclosure. Consequently, the CFTC has not reviewed or approved this article.​​