U.S. GDP in the third quarter jumped slightly more than expected, rising a massive 33.1%, on an annualized basis. This was the strongest quarterly GDP gain on record, after the second-quarter's record 31.4% plunge. This robust report was released by the U.S. Bureau of Economic Analysis ("BEA") in the face of major market selloffs amid the rising concern over the significant uptick globally in the spread of the coronavirus pandemic, the capitulation for any near-term fiscal stimulus, and uncertainty over Tuesday's upcoming U.S. elections. 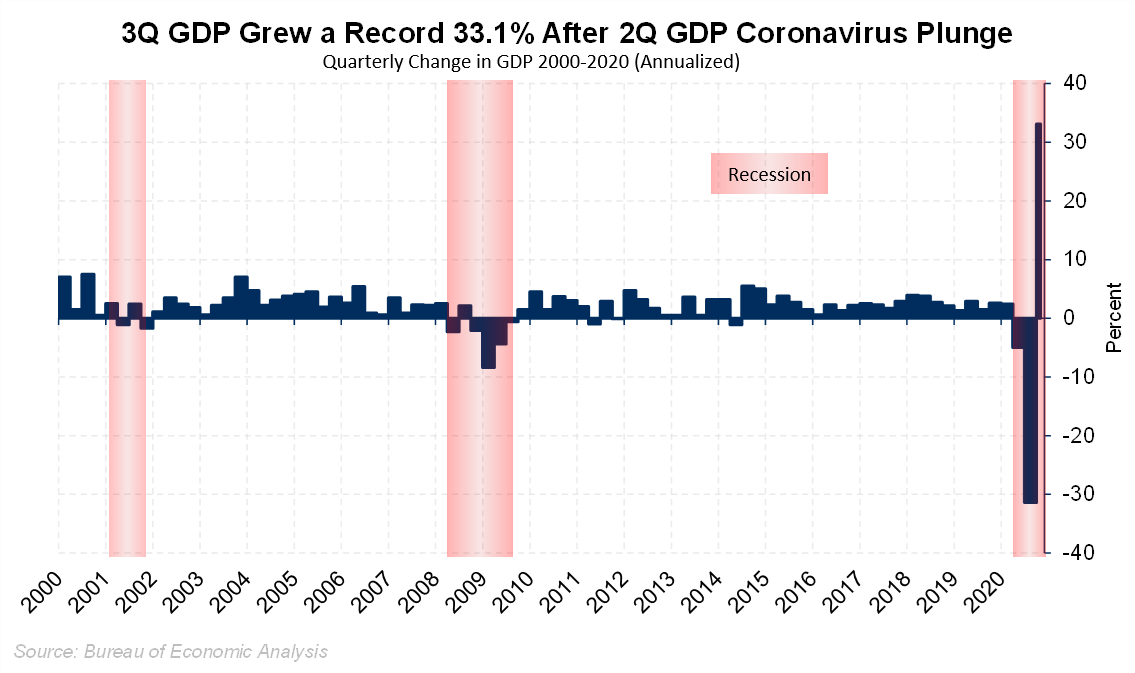 This record rise in GDP will likely mark the beginning of a recovery, after a recession which abruptly started at the end of 2019 and likely ended during the second quarter of 2020. Yet the scale and unprecedented nature of the COVID-19 downturn may still leave lingering scars during the recovery. Most of the strength in the third quarter was concentrated in the beginning weeks of the period, confirming a significant slowdown going into the final quarter of this year.

Consumer spending was robust, rising an annualized 40.7% in the quarter, though it remains below the peak registered in the last quarter of 2019. The unique nature of the current health crisis redistributed consumer spending toward goods and away from services, as more spending on household items to accommodate work-from-home arrangements came at the expense of leisure activities, such as vacationing and dining out.

All these numbers are subject to revision as the BEA collects more data, and this year's second and third quarters will probably be subject to especially large revisions given how abnormal both were.

Even with this enormous third quarter gain, overall GDP is 3.5% below its pre-pandemic peak, and the continued coronavirus crisis will keep business and jobs depressed in sectors like travel and restaurants. The spread of COVID-19 cases is again gathering speed globally and U.S. lawmakers remain in an extended deadlock over a new fiscal stimulus package. Additionally, there are still nearly 11 million fewer workers on payrolls than there were before the pandemic, and analysts caution that economic growth will be more modest and choppy in months to come, making a full recovery in GDP at least several quarters away.

Still, last quarter was a solid start to economic recovery from the trench of recession.

Prior to Thursday's GDP release, the week saw a strong selloff in equities and a decline in Treasury yields and interest rate swap levels as pre-election stimulus hopes faded, with both Democrats and Republicans trading blames, while the spread of COVID-19 surged.

After the latest call between House Speaker Nancy Pelosi and Treasury Secretary Steven Mnuchin on Monday, there was still no agreement on both the size and the language of another rescue bill. President Donald Trump's administration was last at $1.9 trillion, while the Democrats were holding firm at $2.4 trillion.

Trump and his aides appeared resigned to waiting until after the election to get a stimulus package, placing the blame on Pelosi for the delay. Trump repeated his accusation that Pelosi is holding out for funds to bail out what he described as "poorly run Democratic state and local governments". Trump went on to say that "after the election, we'll get the best stimulus package you've ever seen."

The speaker responded in a statement that "the president's words only have meaning if he can get Mitch McConnell to take his hand off the pause button," referring to the Senate majority leader's reluctance to embrace a larger-scale relief bill. Pelosi reiterated her charge in a letter to House colleagues that the administration was not committed to a strategic plan to "crush the virus."

While the chances of a stimulus package by Election Day have evaporated, Pelosi said Thursday that it is still possible to get a deal on fiscal stimulus with the Trump administration before the start of the new congressional and White House terms in January.

The stalemate in the months-long talks leaves the U.S. economy more vulnerable to damage from a resurgent coronavirus pandemic. The shape of any post-election package is also unclear and will likely be influenced by the election's results.

A Trump victory and continued Republican control of the Senate would likely result in a smaller package than Pelosi and House Democrats are seeking. Senate GOP leader McConnell has consistently criticized the Democrats for pushing what he considers an "overly broad spending package" that includes non-coronavirus related items. He attempted to advance a roughly $500 billion bill last week, which was blocked by Democrats.

A victory for former Vice President Joe Biden along with a flip of the Senate to the Democrats, the so-called "blue wave" that fueled many markets higher just last week, would clear the way for a bigger-scale stimulus. Although that could be easily delayed into 2021, should Republicans resist any compromise during their remaining weeks in control in a lame-duck session.

A split outcome from Tuesday's elections could bring a variety of further complications. But in the interim before the new Congress sits, Republicans would have to yield 13 senators from their ranks to join Democrats in approving any deal. GOP leadership is skeptical whether 13 Republican votes would ever materialize.

COVID-19 re-emerging in Europe and the U.S., upsetting several markets

The global coronavirus pandemic is spreading to record levels in Europe, with France and Germany preparing for new lockdowns while their governments try to strike a balance between protecting public health and avoiding another debilitating blow to their economies. The U.K. set records by reporting more than 300 coronavirus deaths for several days (as compared to the U.S. average of around 908 people per day) during the week, while Italy and Portugal reported record new daily cases.

In the U.S., the seven-day average of COVID-19 cases is tracking 21% higher than last week alone, according to Johns Hopkins University. The U.S. broke its single day record for new coronavirus infections Thursday, reporting over 91,000 new cases, as hospitalizations also hit new record highs in many states and is nearing overall pandemic highs for the entire nation.

Surprisingly, these dismal pandemic-driven consequences did not move Treasury yields or interest rate swap levels much earlier in the week, which would typically rally during such risk-off periods. To the extent that the heightened focus on COVID-19 contributes to a Democratic sweep of the White House and both chambers of Congress more likely, bond traders are likely nervous to push yields too low. The consensus expectation seemingly remains that a blue wave is very probable and such an outcome would bring a larger round of fiscal stimulus and cause longer-term yields to rise.

In other markets, equity indices tumbled throughout the week as it became clear that no pre-election stimulus deal was in the offing in addition to the concerning rise in coronavirus infections, leading the S&P 500 Index to decline 3.5% on Wednesday alone, its worst day in almost two months, and closing the week back at the index's starting level at the beginning of the year. Oil prices also fell sharply over the week due to concerns that the escalating infections will drain demand and also due to a strengthening U.S. dollar. The rising strength of the U.S. dollar, combined with the macroeconomic crises, contributed to a tumble in the price of gold which has fallen about 9% since its high above $2,000/ounce back in early August. In the non-Treasury fixed income markets, exchange-traded funds that track junk-rated corporate bonds fell to two-month lows.

Initial jobless claims fall to their lowest level since March

The number of first-time filers for state unemployment insurance fell for a second week to their lowest level during the pandemic, the Labor Department reported Thursday. Initial jobless claims came in at 751,000 for the week ending October 24th, down 40,000 claims from the previous week. Economic surveys expected initial jobless claims to come in at 778,000. It was the lowest initial claims total since the week of March 14th, when claims only reached a level of 282,000.

Continuing weekly jobless claims, which include those receiving unemployment benefits for at least two straight weeks, dropped by 709,000 to 7.75 million for the week ending October 17th. This compares to the previous week's upwardly revised continuing claims total of 8.465 million. This large drop is likely due, at least in part, by the drop-off of Americans that met their state's maximum duration for unemployment insurance.

This represents the ninth continuous week that initial weekly jobless claims have remained below 1 million, a key barrier that is characterized the COVID-era labor market. Continuing claims have remained below the 10 million threshold. These are both encouraging signs that dovetailed with Thursday's record-shattering third quarter GDP report. The Treasury market reacted to these reports by pushing yields higher at the end of the week, with the ten-year Treasury yield climbing north of 0.85%, after touching 0.75% Wednesday: 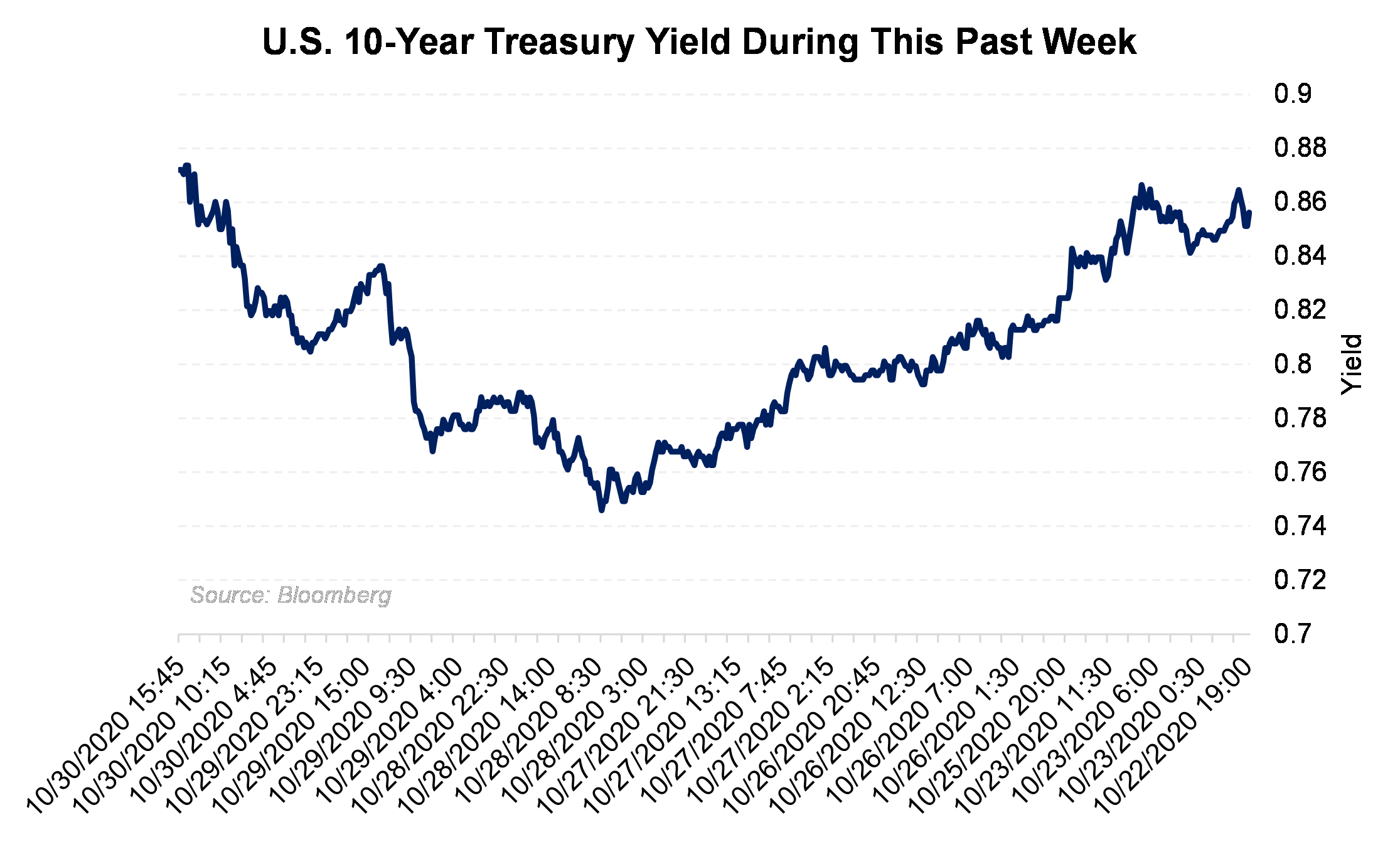 But with coronavirus infections rising sharply again, economists are concerned over the looming jobs market. The question is going to be whether a surge in COVID-19 cases and renewed measures aimed at containing the virus will lead to another spike in jobless claims in the coming weeks and months ahead. The current health crisis carries the possibility that states and cities that have already begun rolling back moves to reopen businesses could once again lock down, returning many currently working Americans to the unenviable ranks of the unemployed.

Personal spending and income rose more than expected, but outlook is uncertain

In the last major economic report of this volatile week, U.S. personal income and spending reports both showed increases by more than forecasted during the month of September. Incomes during the month rose 0.9% from the prior month, following a 2.5% decline in August, a Commerce Department report revealed Friday. That compared with markets estimates for a 0.4% gain. Household outlays advanced 1.4% in September, also exceeding forecasts that called for a 1.0% increase in spending.

The personal saving rate fell for a fifth month but remained elevated at 14.3%. In February, when the unemployment rate was at a 50-year low, the savings rate was 8.3%. Hundreds of thousands more Americans headed back to work in September as the labor market continued to slowly recover, putting more cash in Americans' wallets. However, the extended stalemate between lawmakers on additional stimulus relief and a potential retreat in job growth due to lockdowns could restrain further growth in incomes.