The prompt-month Waha contract has gone positive for the first time since December 2015. The recent spike in pricing shows the effect of the new Permian Highway Pipeline entering service, and perhaps incremental capacity in Mexico.

Pipeline capacity out of the Permian has been plagued by constraints. But Kinder Morgan announced that its new 2-Bcf/d Permian Highway pipeline (PHP) went into service in early November. While lower production and colder weather forecasts may have helped increase near-term basis prices, increased pipeline capacity is likely a primary driver behind the price improvement.Waha traded in a tight range between 2015 and 2016. However, as oil production started to recover and accelerate in 2017, a flood of associated natural gas came with it. The growth overwhelmed gas-transportation capacity.

Up until recently, there was not enough pipeline capacity out of the Permian for this associated natural gas. This caused Waha basis prices to become extremely volatile in 2018-2019. 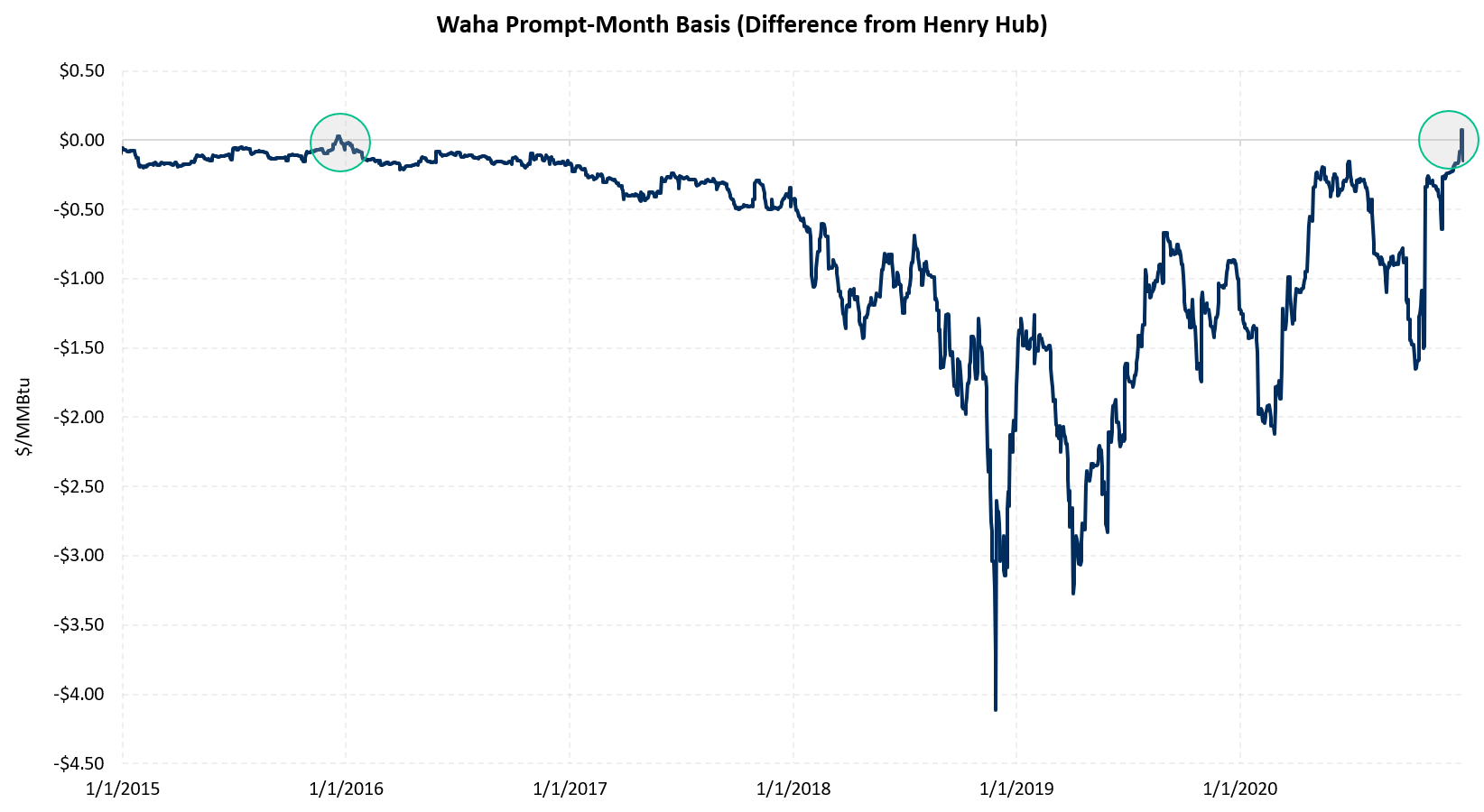 Recently, something unimaginable happened to the prompt-month Waha contract — it went positive. This was the first time it has been positive since December 2015.

Waha's local supply-demand balance depends on (1) local production, (2) local demand, and (3) pipeline capacity out of the Permian basin toward other markets. Therefore, Waha basis can improve if local production falls, or if more net transportation becomes available. When more transportation capacity arrives, the price spread between Waha and downstream markets, such as NGPL Midcont (in Oklahoma) and Houston Ship Channel (guess where) become narrower.

If things keep improving, then the price spread to these downstream markets becomes so narrow that it can become uneconomic to transport gas out of the Permian. This is a governor on how high Waha basis can go, because the price at downstream basis locations become a limiting factor.

Looking at the spread between Waha and NGPL Midcon basis, NGPL Midcon has temporarily stopped being the resistance for Waha prices in the near term. 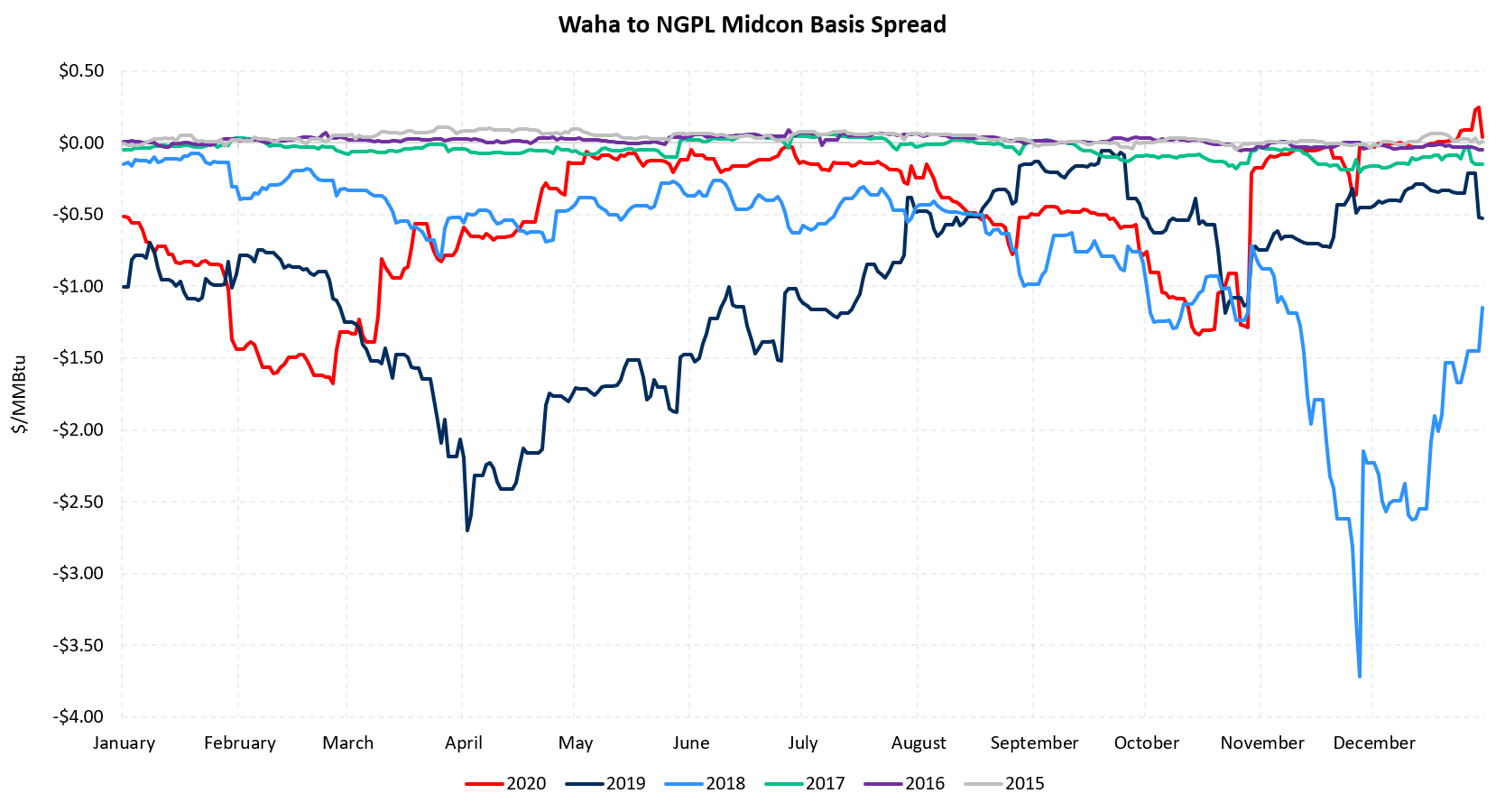 The same thing can be said about Houston Ship Channel, albeit to a lesser degree.

What is responsible for this sudden change in Waha pricing? For starters, crude oil production is lower, compared to years past, resulting in lower associated gas production. Weather forecasts have also been calling for colder-than-normal temperatures in West Texas adding further bullish price sentiment.

AEGIS notes that these factors are unlikely the primary cause behind the sudden price change. What may be a more likely cause is additional pipeline capacity, to both the Gulf Coast and Mexico, coming into service.

As of November 1, Kinder Morgan announced that the 2.0 Bcf/d Permian Highway Pipeline (PHP) is mechanically complete. The recent pop in Waha basis this week, for the January 2021 contract, could signal that PHP is having a strong effect. The pipeline had been expected to enter into full service some time in 1Q2021, so it has arrived earlier than some recent estimates.

While the PHP increases capacity to the Gulf Coast, downstream pipeline completions inside Mexico have also helped increase export capacity and potential demand from the Permian. Both the Villa de Reyes-Aguascalientes-Guadalajara (VAG) and the Samalayuca-Sasabe pipelines have been physically completed. Once these pipelines are both fully operational, they will bring approximately 1.4 Bcf/d of new capacity online. Texas export pipelines have capacity that is not being used, so the new interior-Mexico pipelines may instantly enable more gas to leave the U.S. 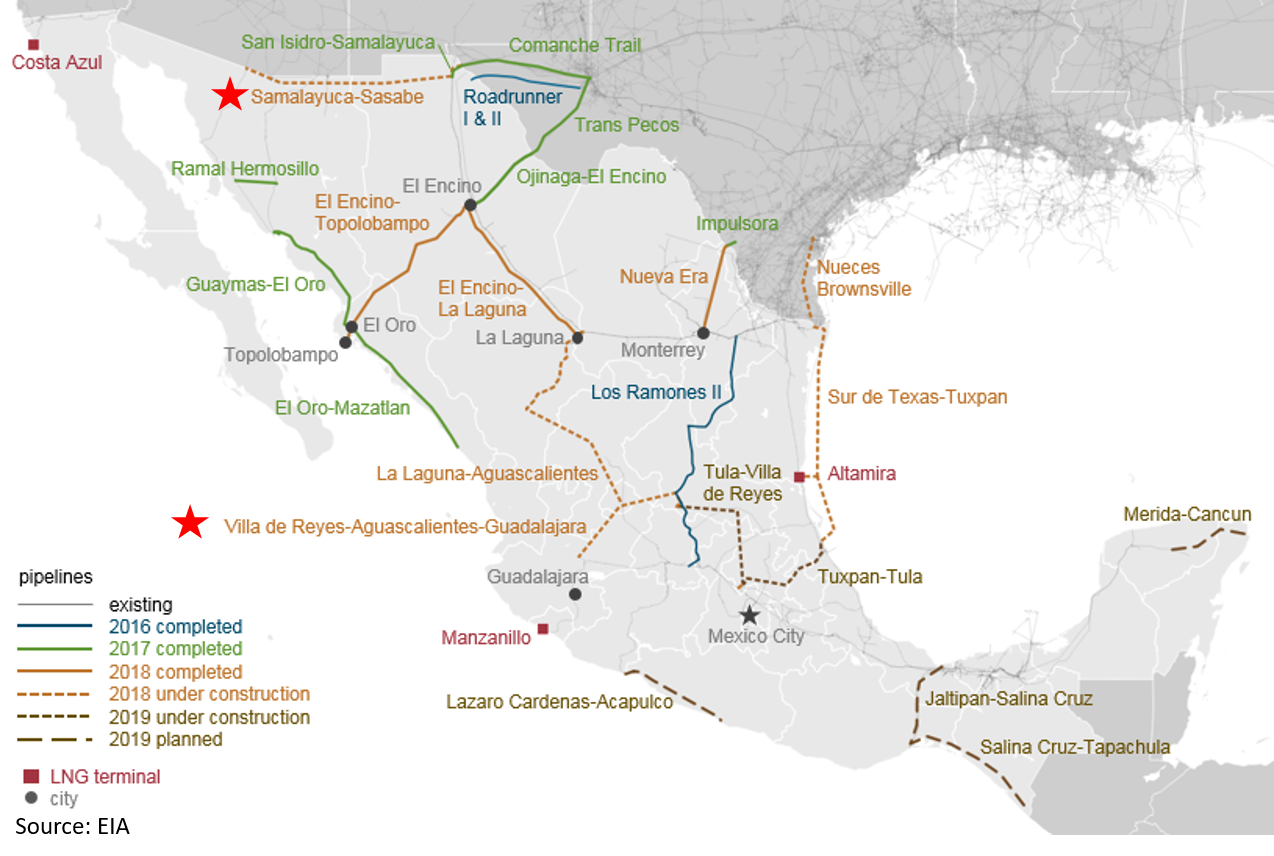 Overall, the uncharacteristic improvement in Waha basis may be more related to increased export capacity as opposed to increased demand and lower supply.