Earlier this morning, November natural gas had dropped to below $2.55/MMBtu, a day-over-day decline of 25c. The selling began before 8:00 AM, likely in response to milder forecast temperatures for mid-October.

In its first day as the prompt natural gas contract, November futures soured. After trading near $2.77/MMBtu after hours on Monday, selling accelerated around 7:45 AM this morning, driving prices to $2.60 by 8:36 AM, then down to $2.54 just before 11:00 AM.

Further, winter prices were down in sympathy. The January contract, usually the highest point in the curve, dropped to $3.23 at around 11:00 AM, down from $3.36 early in the morning.

The meaningful overnight change in sentiment was likely due to weather forecast revisions. Instead of mid-October cold in the Midwest, some models showed a 10°F warming in areas around Chicago. This would erase most of the heating-degree days (HDDs) previously expected.

The November contract is especially vulnerable to changes in October demand because storage levels are elevated across the U.S. and are approaching capacity. Some facilities in the Northeast have already begun restricting deliveries to storage caverns. Canada's eastern storage locations are near full, too, implying more supply to the Midwest and U.S. Northeast. 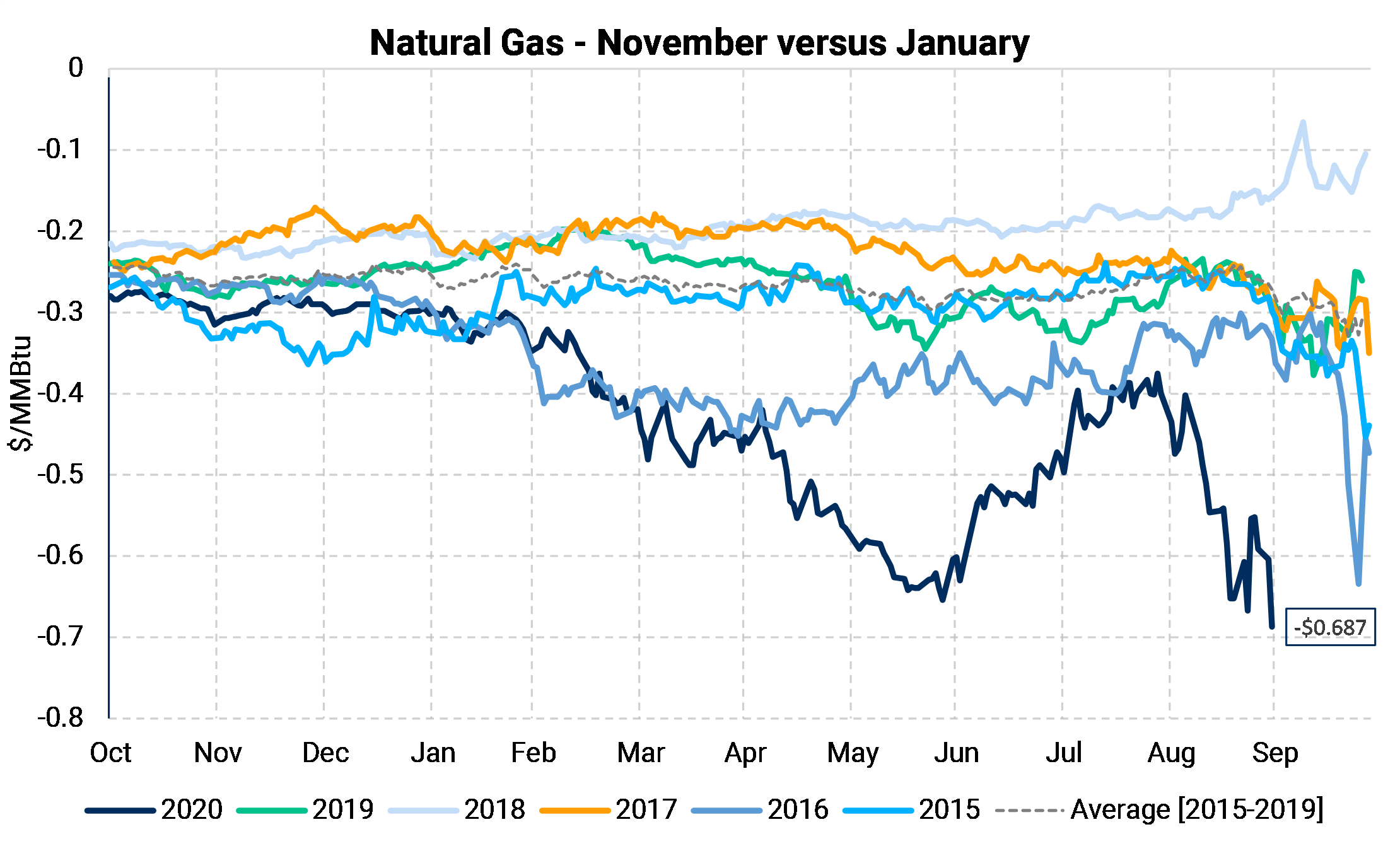 Winter weakness today may be the result of spread trades. Beyond November 15, storage limits become less relevant, as the caverns are withdrawing gas, rather than injecting gas. But January and the whole winter strip were down sharply today.

The historical price spread between the most nearby November contract and the most nearby January contract is shown below. This year, that spread has been especially wide. However, it has shown support around -68c. Could this be happening today? As November weakens, spread traders could be buying some November contracts and selling the January contracts, locking-in a synthetic storage profit. In fact, storage traders often use this practice of buying financial spreads to prepare for (hedge) the physical act of storing gas for later use.

Shoulder-season gas contracts have been very volatile lately. We do not interpret today's price action as a reason to abandon our constructive outlook for gas prices in 1Q and the entire Cal '21 strip.