Libyan daily oil production has climbed to 500 MBbl/d, from 150MBbl/d earlier this month, according to Bloomberg. The country's largest oil field, The Sharara, lifted its force majeure on October 11, 2020, after the Libyan National Army ended its nine-month blockade. The shutdown has been ongoing since January. 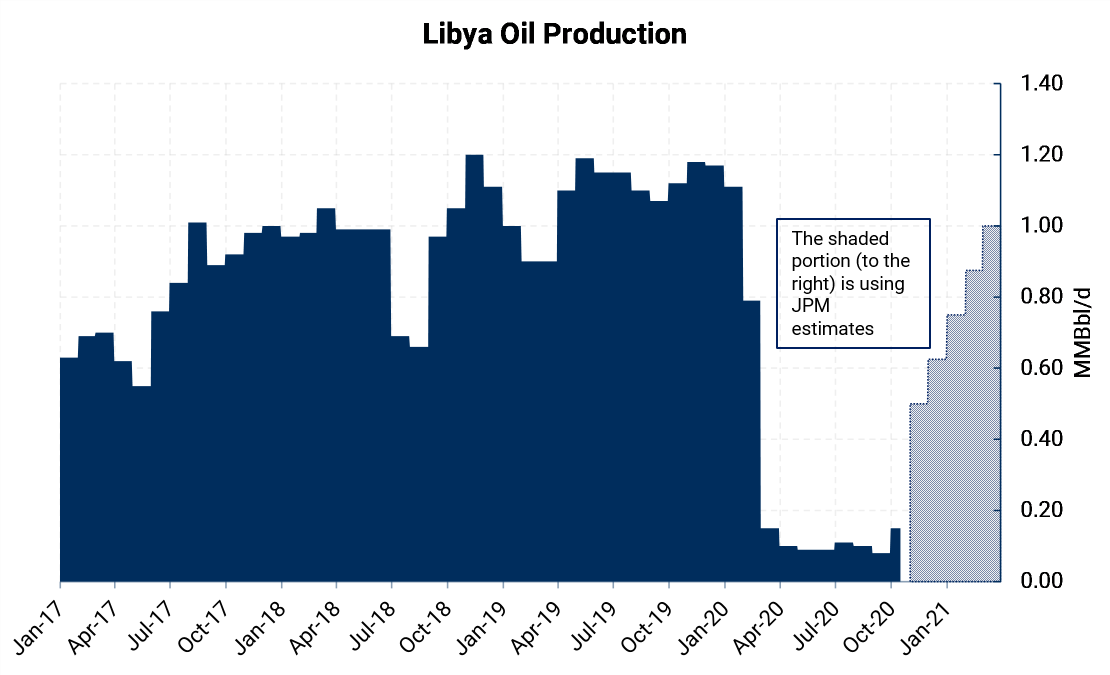 The international benchmark, Brent, had fallen sharply following the announcement yesterday morning (October 15, 2020, though the benchmark pared some of those losses later in the day. The benchmark finished the day (October 15, 2020) 0.6% lower, with WTI experiencing a similar move. The market has been expecting Libya to increase production since the halt in the civil war was announced last month. The timing of the increase in production comes while Coronavirus cases continue to increase globally, leading some to become more pessimistic about the expected recovery in demand and the need for additional output.

Before the shutdown, Libya was producing oil at an average rate of 1.2 MMBbl/d. That leaves an additional 700 MBbl/d of additional production that could theoretically return to the market, given the current report levels of 500 MBbl/d.

JP Morgan Chase & Co has said that they forecast Libyan oil production will reach 1 MMBbl/d by March, following the truce reached between the UN-backed Government of National Accord and the LNA to restart oil fields and terminals. Still, the assumption that the truce will hold is anything but certain. Libya has been torn apart by a civil war that has lasted ten years, following the removal of Muammar al-Gaddafi in 2011.

Libya holds the largest total reserves in Africa. Its fields produce a very light, sweet crude that yields a large portion of gasoline and middle distillates that make it great for simple refineries in the Mediterranean and Northwest Europe.

AEGIS View: The return of production in Libya will likely weigh on prices for the foreseeable future. Libya is exempt from the OPEC curtailments agreed to earlier this year, which means they could return production quickly, assuming no infrastructure/ well damage was sustained during the shutdown. The 1 MMBbl/d in additional production may pressure prices downward.