LNG Is Back, Just in Time for The Winter Rally

U.S. LNG exports have increased over the last few weeks as trains shut by a trio of hurricanes and facility maintenance have returned online. 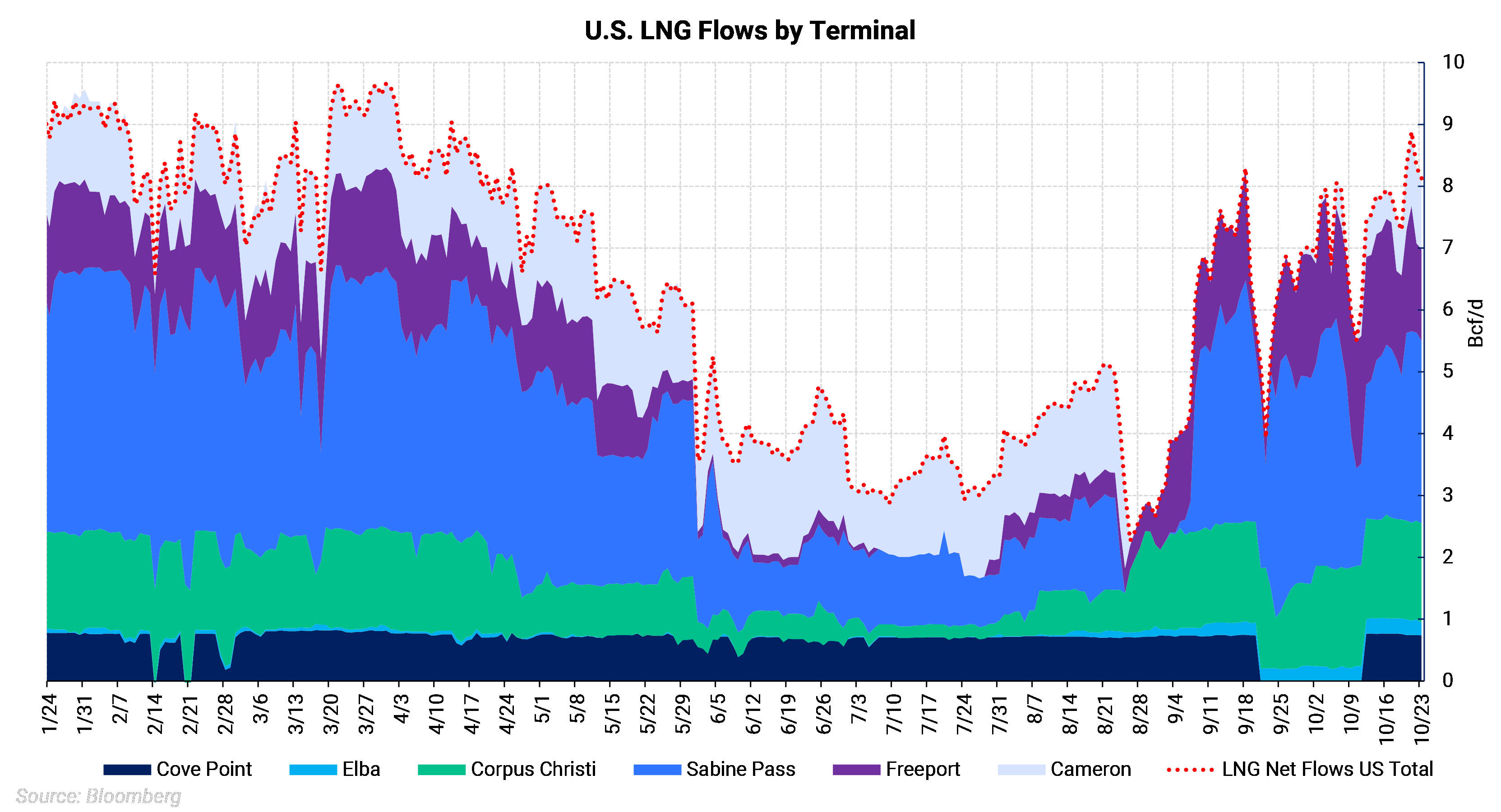 This hurricane season has been devastating for the Gulf Coast, and Louisiana in particular. Hurricane Laura was the first hurricane to bring LNG facilities offline. Both Sabine Pass and Cameron LNG were affected by the hurricane, bringing feedgas flows to both facilities to a halt.

Cameron LNG took a direct hit. It remained offline for 31 days as the area's power was knocked offline. Even when power was restored, flows remained well below nameplate capacity (1.75 Bcf/d) while repairs were taking place. On October 20, feedgas flows to the facility reached 1 Bcf/d for the first time since the hurricane struck as the first tanker was able to sail up the Calcasieu ship channel. The ship channel had been obstructed since October 2, making the facility inaccessible to most LNG tankers.

Cheniere's Sabine Pass LNG facility was also affected by the first hurricane; however, the outage duration was much less severe. Feedgas flows to the site are around 3 Bcf/d, or 85% of its operational capacity as of October 20.

Away from the Gulf Coast, Cove Point LNG in Maryland underwent a three-week outage as the plant was brought offline to undergo annual routine maintenance. Feedgas flows returned to the site on October 12, and the site is now running near full capacity at around 0.75 Bcf/d.

The timing of the recent (we hope, ongoing!) winter gas rally coincided with the return of the feedgas demand from the facilities. Total feedgas flows to LNG facilities reached 8.8 Bcf/d on October 21, which is only 1.2 Bcf/d removed from the 52-week high of 9.6 Bcf/d. With U.S. nameplate capacity at around 10 Bcf/d, that means U.S. LNG facilities are already running at around 85% capacity, but still with room to grow.

Things are finally looking better for U.S. LNG exports. For the first time since the onset of the pandemic, Cheniere announced that no deliveries were cancelled for December delivery. All indications suggest feedgas flows should remain at or above their current levels for the foreseeable future, which will be an important factor in the movement of gas prices this winter.