New COVID-19 Variant, Omicron, Helps Push Oil To Its Worst Day Since April 2020; Is This An Overreaction?

Will this new variant lead to renewed lockdowns, like those observed at the onset of the pandemic? So far, travel restrictions have been limited to southern African countries where the virus has been detected, and demand losses are mostly confined to that region.

Several European countries imposed travel bans on southern African countries as soon as the variant was announced, as countries like Austria were already dealing with a surge in COVID-19 cases. The U.S. joined Europe in restricting travel from South Africa, Botswana, Zimbabwe, Namibia, Lesotho, Eswatini, Mozambique, and Malawi. Since then, Omicron has shown up outside Africa. Several countries, including the Netherlands, Portugal, Germany, Italy, the Czech Republic, Belgium, the U.K., and even Canada, have identified at least one case.

The early travel restrictions have shaken some confidence in the demand recovery. The changes in oil prices are evidence. Friday's sell-off was pronounced throughout the curve as the Cal '22, Cal '23, and Cal '24 strips all posted losses of $8.60, $7.00, and $5.30, respectively. The rolling prompt contract is still over $13.50 removed from its seven-year high of $84.65 reached on October 26, 2021. The chart below shows the magnitude of the sell-off and how the forward curve looks currently. 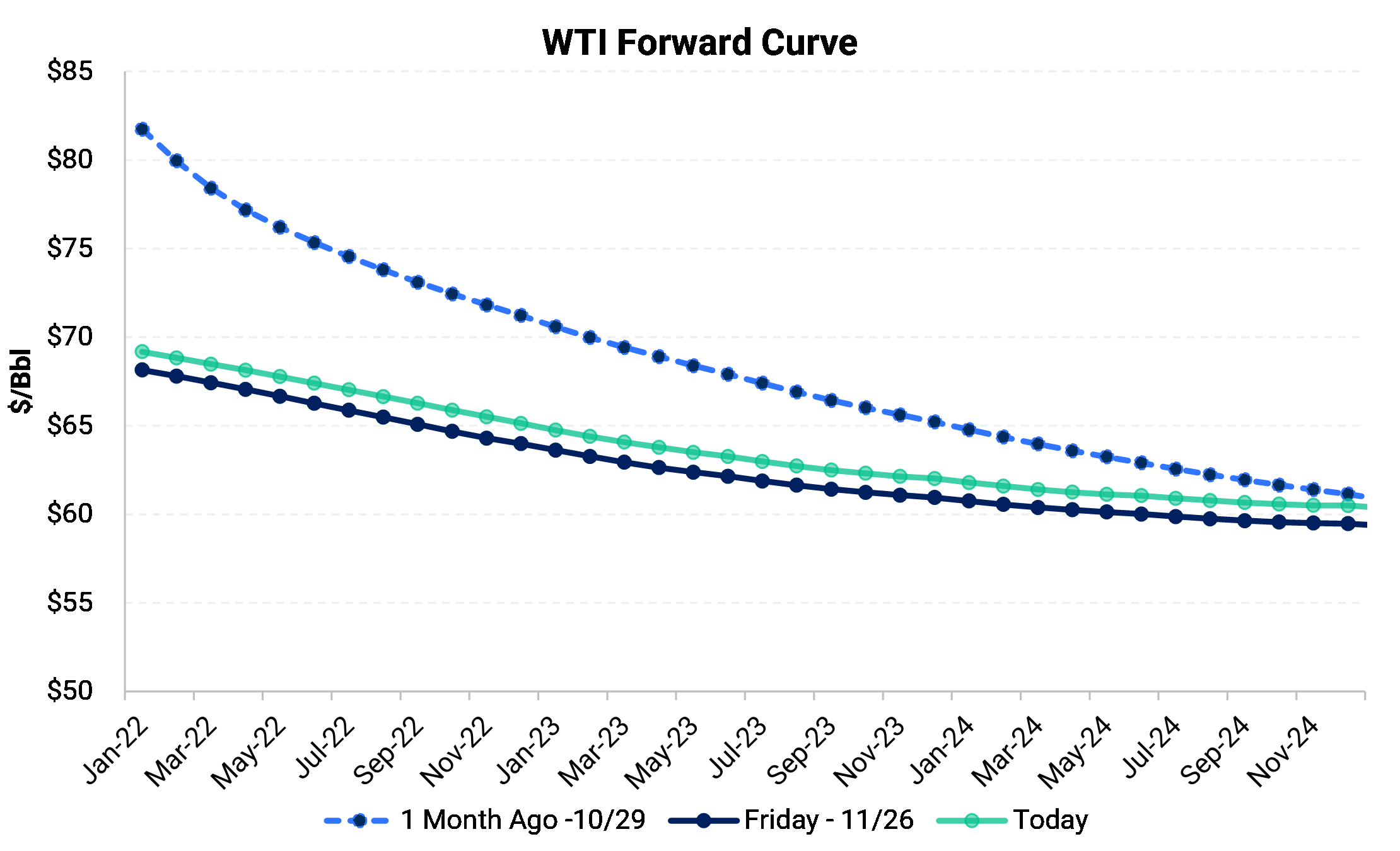 Goldman said on Friday that the sell-off was likely "excessive" and shows the market is pricing in a 4 MMBbl/d demand loss over the next three months and a more permanent impact of -1.5 MMBbl/d. The world's largest independent oil trader, Vitol, also noted that "Friday's price drop was excessive given not enough is known about the new COVID strain." Further, J.P. Morgan doubled down on its bullish forecast by reiterating a $125/bbl price target for 2022, citing that OPEC+ spare capacity is vastly overstated (2 MMBbl/d vs. 4.8 MMBbl/d).

By AEGIS models based on Apple Mobility data, demand in several European countries is trending lower this month, but that could be due to Covid cases preceding the new variant and seasonal travel patterns.

The chart below shows globally confirmed COVID-19 cases versus global consumption numbers, as reported by the EIA. The delta variant surged in mid-2021, but the impact on global demand was not very pronounced because governments' reactions were much more tempered than at the pandemic's onset in 2020. By that time, we had a better understanding of the virus and could avoid full-scale lockdowns and limit the economic damage. If Omicron mirrors delta, in terms of its impact on oil demand, then the market could be pricing in a worst-case scenario. 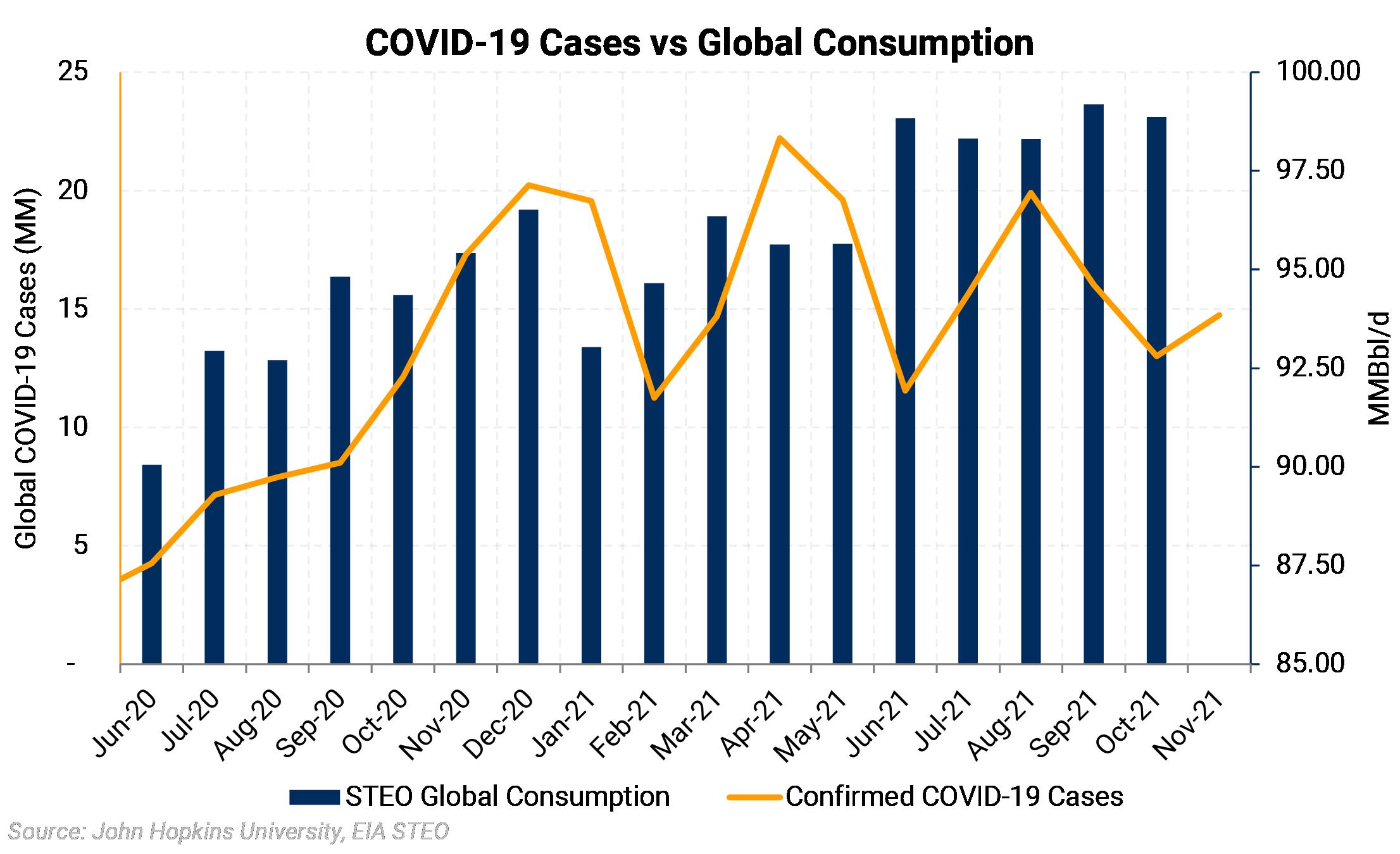 Crude prices have been trending upward since last October as the market has been consistently under-supplied. OPEC+ still holds the power to keep this oil market balanced. If the group decides to halt its supply hikes or even decrease supply further, then the downside to prices remains limited. Still, it is too early to determine how the Omicron variant will impact demand and prices.