A technical panel of OPEC+ ministers met On November 17 to discuss whether output cuts should be extended in light of faltering oil demand, but they stopped short of providing a firm recommendation to prolong the cuts.

Over the past few weeks, Russia and the cartel's de-facto leader, Saudi Arabia, have been outspoken about the need to prolong the group's supply cuts. On Tuesday, the Joint Ministerial Monitoring Committee (JMCC) concluded that "All participating countries need to be vigilant, proactive and be prepared to act, when necessary, to the requirements of the market," after it reviewed findings from its Joint Technical Committee (JTC) on Monday, November 17. The JMMC's role is to inform the cartel of oil market conditions and developments and monitor the its members adherence to OPEC policies.

Based on its own current schedule, OPEC+ is slated to return nearly 2 MMBbl/d of production to the markets in January. The group has set 7.7 MMBbl/d as its current curtailment target, and it plans to reduce that number to 5.7 MMBbl/d for January 2021, in the absence of a change in policy.

Since the last meeting, the group has had a plethora of market developments, including a resurgence in coronavirus cases and the restoration of Libyan crude production. The destruction to demand caused by the pandemic coincides with the additional Libyan output returning to the market, further complicating OPEC's decision. The group has until December 1, 2020 to reach a decision on the supply cut extensions; OPEC rhetoric and published analysis point to an extension.

While the news of COVID-19 vaccines has helped boost sentiment around crude prices since November 9 — Pfizer's and Moderna's both boast near 95% efficacy rates — a material short-term impact on demand is unlikely. The major demand markets of the U.S. and Europe have been hammered by new coronavirus cases, forcing governments to re-introduce several restrictive measures such as lockdowns, curfews, and travel restrictions. However, the proliferation of vaccines promise to boost demand, perhaps in early 2021.

The rate of oil demand growth, or rather lack thereof, has become more evident over the past few months as demand data has trickled in. The three primary forecasting agencies widely read in the industry, the International Energy Agency (IEA), the U.S. Energy Information Agency (EIA) and OPEC, all had downward revisions in their most recent 2020 oil demand forecasts. The latest forecasts by the IEA, EIA, and OPEC project 2020 oil demand will have fallen by -8.6 MMBbl/d, -8.7 MMBbl/d, and -9.75 MMBbl/d, respectively, compared to 2019. 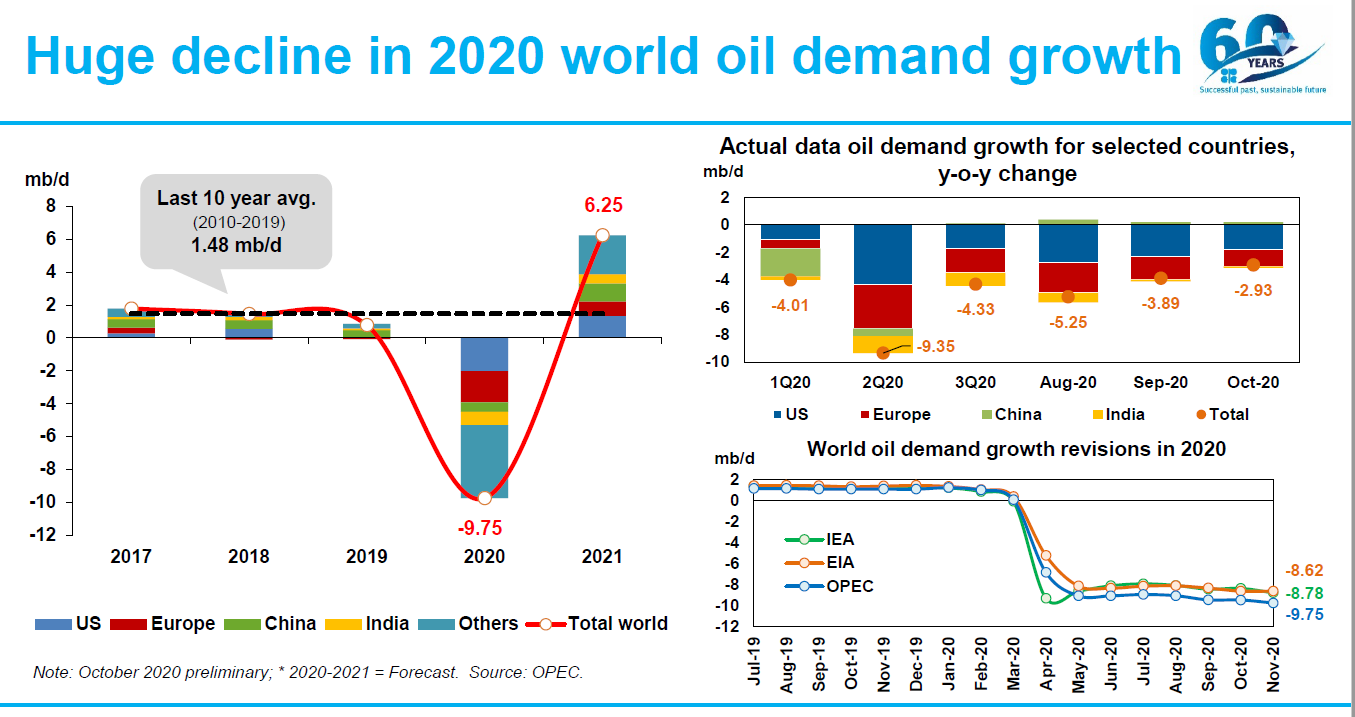 Additionally, OPEC member, Libya, which is exempted from supply-cut quotas, has increased production to 1.145 MMBbl/d, according to the state's National Oil Corporation. This increase in output came much quicker than many had anticipated, as the country was only producing 90 MBbl/d in September. Earlier estimates had the country reaching 1 MMBbl/d of production by 1Q2021 or later. The country is now near its production record of 1.15 MMBbl/d, set before the ousting of Muammar al-Gaddafi in 2011.

Libya has indicated it could reach 1.6 MMBbl/d by the end of 2021 if some investments were made.