The bellwether 10-year U.S. Treasury yield has fallen roughly 20 basis points (0.20%), to the 1.55% range from its former 1.75% range, over the past three weeks. Medium-term, five-year interest rate swap levels have fallen by the same absolute amount, from roughly 1.00% to 0.80% (monthly, Actual/360 basis) over this same period. In the short-term funding arena, three-month USD LIBOR was set at an all-time low Wednesday at 0.17288%. While there are different drivers for these interest rate declines across various maturities of the yield curve, the current themes for the fixed income markets are lower rates and tighter spreads. 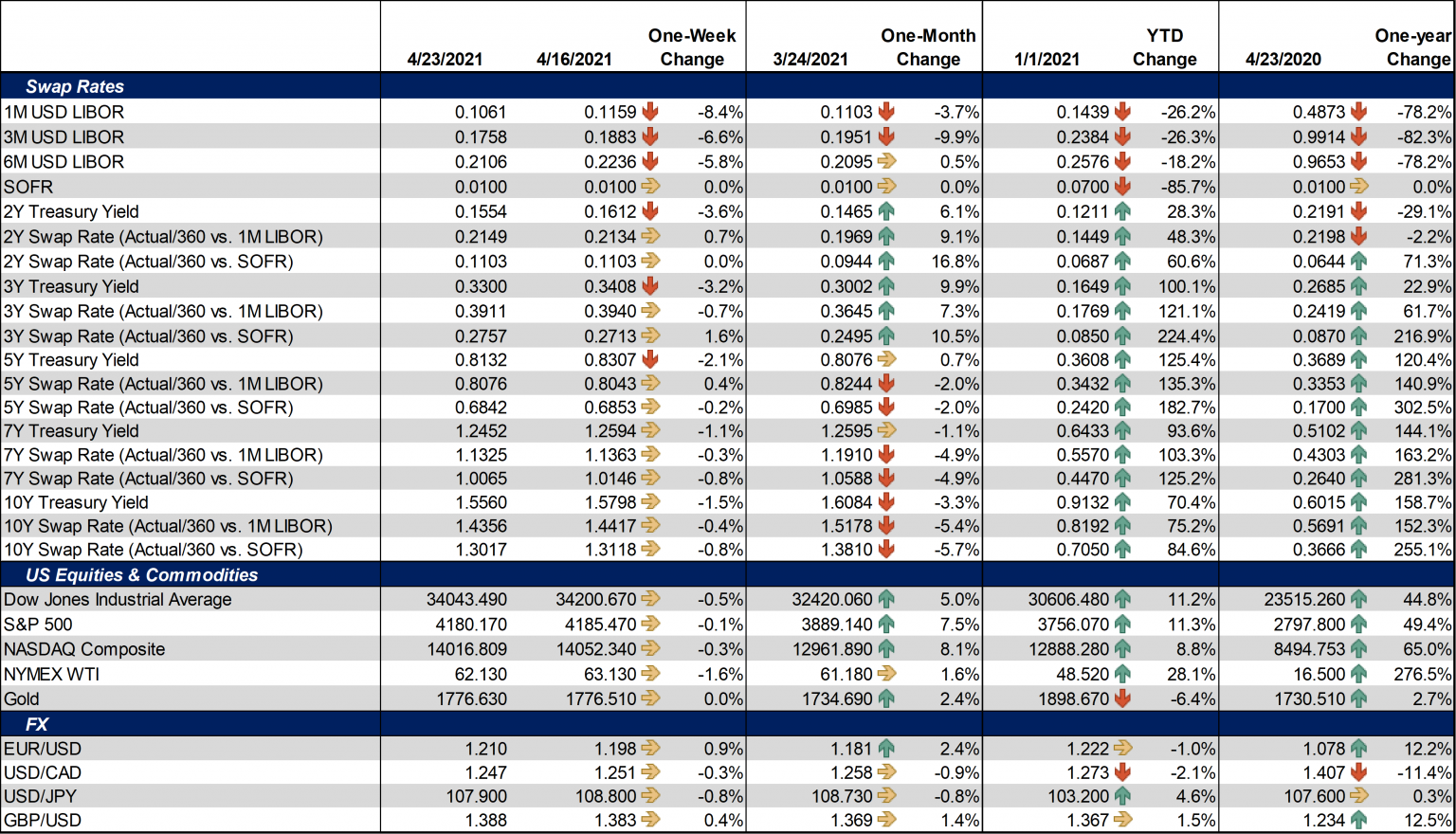 Cash glut, the status of vaccinations, and renewed COVID concerns

USD LIBOR rates, overnight repurchase agreement (repo) rates, Treasury bills, and other short-term borrowing instruments have been driven down by Federal Reserve asset purchases, a shift from bank deposits to money market funds, and an increase in bank reserves that is being fueled by a drawdown of the Treasury's massive cash pile. Corporate demand to borrow from the commercial paper markets has also collapsed, contributing to lower overall short-term funding rates. Currently, there is too much cash in the system apparently chasing too few assets, while there are signs that asset managers have begun to shift, at least a portion of their portfolios, away from equities that may be overvalued and into the safer bond markets.

This risk-off trek to safety also helps explain the rally in longer-term Treasury bonds, and thus lower yields. The seven-day average of vaccinations in America has fallen for the first time, to below the targeted level of three million a day as America faces the transition from public vaccine demand to vaccine hesitancy by those who are yet to be inoculated. Concern over the suspended J&J vaccine continue to mount despite the very low statistical number of very rare, but admittedly concerning, brain blood clots. Both Pfizer and Moderna have announced their plans for the likely need for a third booster shot, starting as soon as this autumn. The pace of global vaccinations and renewed COVID outbreaks, particularly those that entail new, and potentially elusive, variants has dampened expectations for global growth, making foreign government bonds look relatively less attractive, contributing to the recent drop in yields and demand for U.S. Treasury securities.

However, be aware that this does not mean the previous selloff in the perceived safer fixed income bond markets, which increases interest rates, is done. U.S. economic growth is anticipated to accelerate in May and June, potentially causing the Fed to start debating the need for tightening their policies sooner than expected. That implies bond investors, and rate hedgers, should be wary about future economic data points and the possibility that Fed officials will sound less dovish in the coming months. The Fed's next Federal Open Market Committee ("FOMC") meetings are scheduled for next week Tuesday-Wednesday, April 27th-28th. These meeting are capped with a formal announcement and the always anticipated press conference and Q&A session by Federal Reserve Chairman, Jerome Powell.

As a reminder of some of the many green shoots appearing in the U.S. economy, the Labor Department reported that initial weekly jobless claims for the week ending April 17th unexpectedly fell to their pandemic low of 547,000. While over a half million of new claims for state unemployment insurance in a week typically is far from being a positive sign, it is all relative to where you are and the level from which you are coming from. 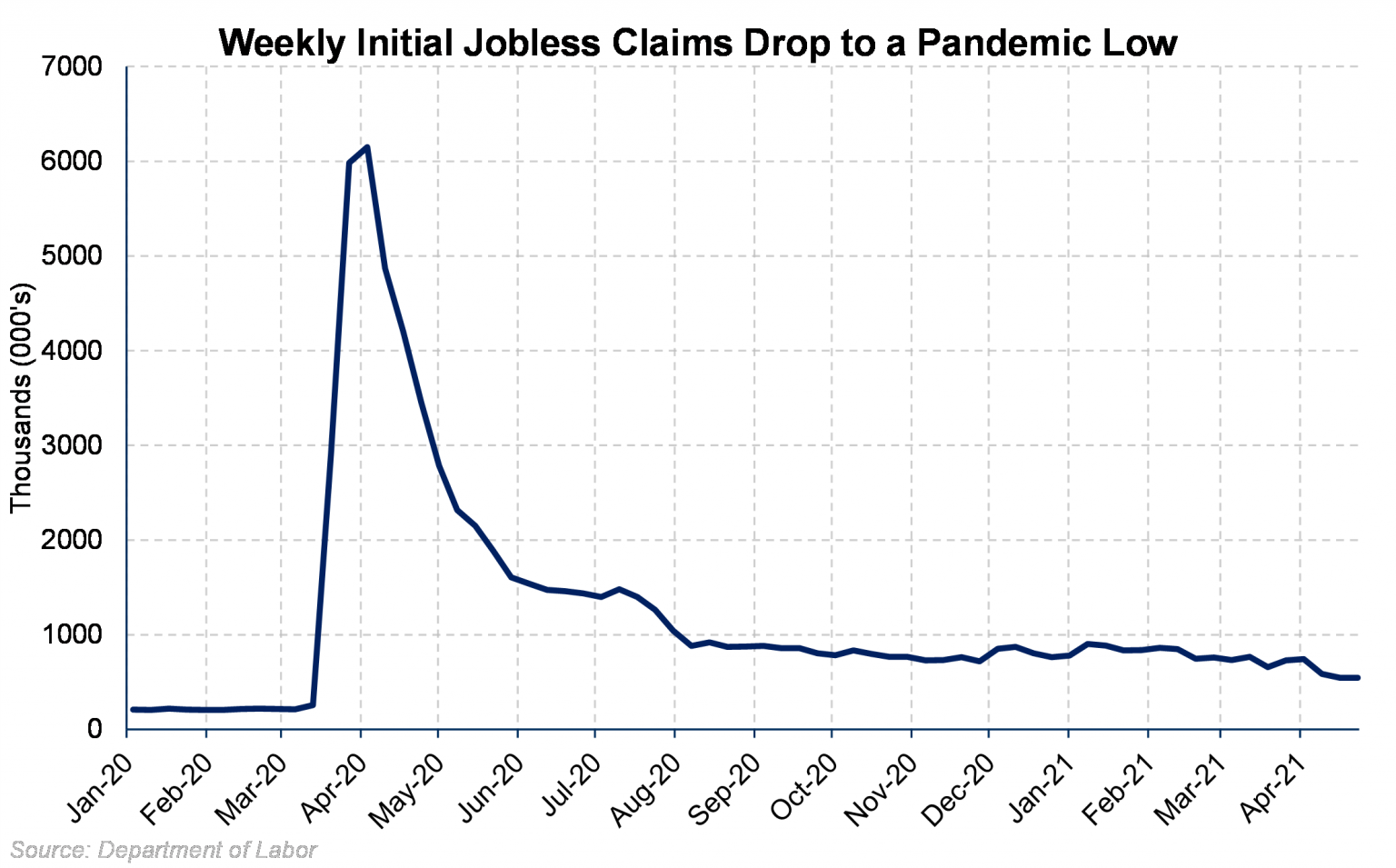 The job market is strengthening as employers look to fill positions that were left empty by pandemic restrictions that have now been eased to various degrees across the nation. This claims data follows strong manufacturing, retail sales, and other indicators in recent weeks.

President Biden's proposed American Family Plan, that includes sweeping new social-spending programs, will likely include a large increase in the top federal tax rate on long-term capital gains, from 23.8% today to 39.6% (after including the 3.8% surtax that helps fund the Affordable Care Act) for those who earn over $1 million a year. When including the net investment income tax, the top federal rate on capital gains would be 43.4%. Rates would be even higher in many U.S. states due to state and local capital gains taxes, leading to a combined average rate of nearly 49% compared to about 29% under current tax laws.

A high combined capital gains tax rate would influence when taxpayers decide to sell assets and realize gains. If the effect is large enough, federal revenue from capital gains income may decline because taxpayers have decided to avoid realizing gains and the higher tax rate. However, less than one-half of a percent of all American individual taxpayers reported adjusted gross income of more than $1 million and capital gains or losses on their returns, according to Internal Revenue Service tax return data from 2018.

Biden's plan would also raise the top marginal income tax rate to 39.6% from 37%, the level it was cut to under former President Donald Trump's tax overhaul in 2017. These proposals are consistent with Biden's campaign promises to raise taxes on the wealthy, but not on households earning less than $400,000. The president is scheduled to lay out the proposal's full details next week. If taxes are amended along the lines being proposed, it would end a century-old precedent of under-taxing investment relative to wages and salaries.

News of these tax provisions alarmed investors Thursday, with equity markets giving up gains as investors absorbed the initial details of this proposal. Given that these proposals only effect the wealthiest of individual taxpayers, Biden and the Democrats are betting the initiative will be popular enough to win passage in Congress, where it cannot lose a single Democratic vote in the Senate and only a handful in the House, as Republicans are staunchly opposed to all these proposed individual tax plan increases. These increases, along with proposed corporate tax increases, would be a reversal of the recent tax reduction legislature.

Republicans are willing to negotiate with spending on roads, bridges, waterways, and broadband internet, revealing an alternative infrastructure proposal of $568 billion, spread over five years. This contrasts with Biden's $2.3 trillion plan. This is yet another Washington, D.C. (soon to be an independent state?) example of what is referred to colloquially in the markets as a "wide bid-offer spread".