The U.S. economy appears primed to recover from the COVID-19 slump much faster than others, causing havoc in the bond markets this week and potentially exacerbating the kind of imbalances that caused trouble after the last 2008 financial crisis. What was observed this week could be labelled an "inflation tantrum". Official policy is exceptionally easy during a time of great fiscal stimulus and Federal Reserve Chairman Jerome Powell decided not to take the opportunity this week to calm the markets.

After Powell spent two days this week telling U.S. lawmakers the economy is in no state to be thinking about monetary tightening, financial markets nevertheless started pricing in a rapid recovery. A combination of Treasury supply indigestion, a $50 billion investor Treasury bond position unwind, and vanishing liquidity exacerbated moves as traders aggressively repriced the Federal Reserve rate-hike outlook, despite no major economic developments or shifts in tone from policy makers.

The significant and rapid rise in Treasury yields and interest rate swap levels this week is yet another signal to take proactive steps to hedge future interest rate expense. Despite their recent rise, rates are at historically low levels and the cost to hedge is still considerably cheap as the market is not concerned about any near-term Federal Reserve policy rate increases. Current one-month USD LIBOR is 0.1185%, but recall, pre-COVID one-month LIBOR rates were in the 1.75% to 2.00% range. 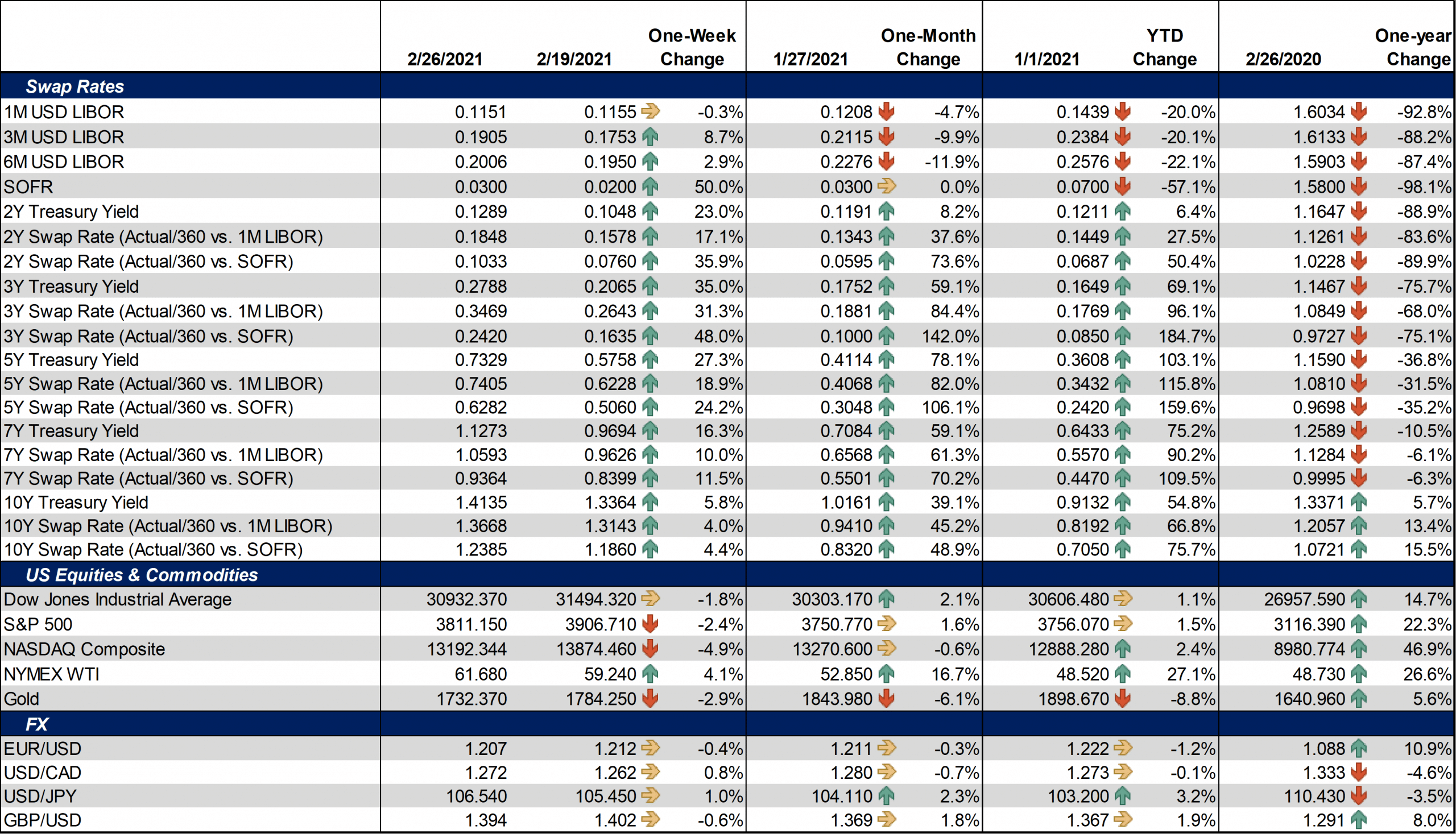 One of the main drivers in the bond market selloff this week was the five-year Treasury note, a maturity often associated with long-term Fed rate expectations, where yields closed 22 basis points (0.22%) higher Thursday, with a "print" (or, trade) at over 0.85% intraday: 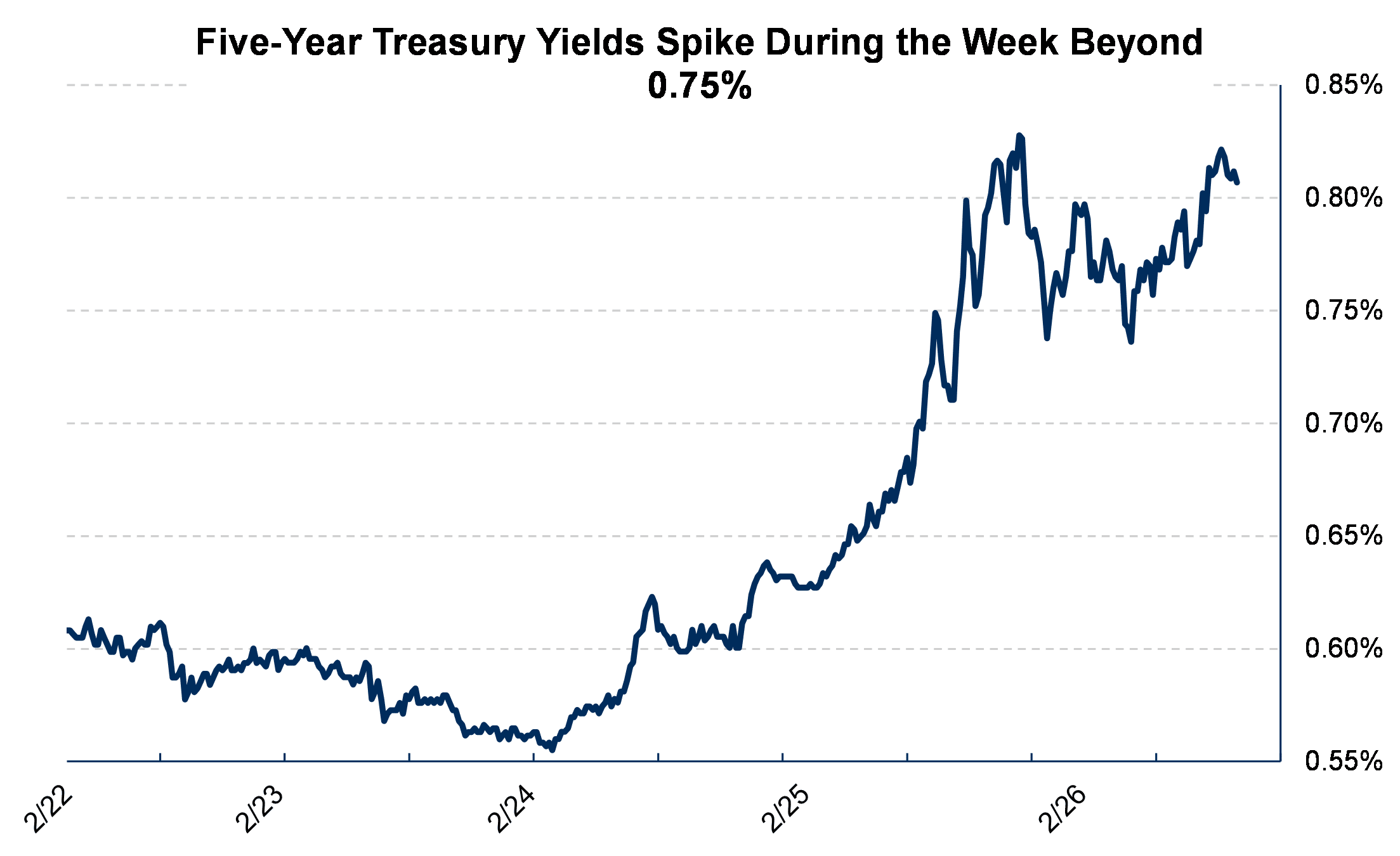 The selling was triggered after the Treasury's auction of new, on-the-run seven-year bonds saw record low demand. The bid-to-cover ratio, a gauge of investor interest, came in at 2.04x, well below the recent average of 2.35x. The poor auction results sent five-year Treasury yields surging through 0.75%, a crucial technical level watched by investors as a signal that any bond selloff could worsen. Yields on intermediate to long-dated maturities are surging as well, suggesting a market view that rapid reflationary will press the Fed to pull back on their monetary stimulus activities.

Along with the sharp rise in five-year Treasury yields Thursday, the ten-year Treasury yield printed a trade at above 1.60% before settling in at 1.55% for most of the remaining trading day. This was a sharp blast through its 1.30% resistance level just set at the end of last week, creating a new technical floor at roughly 1.45%: 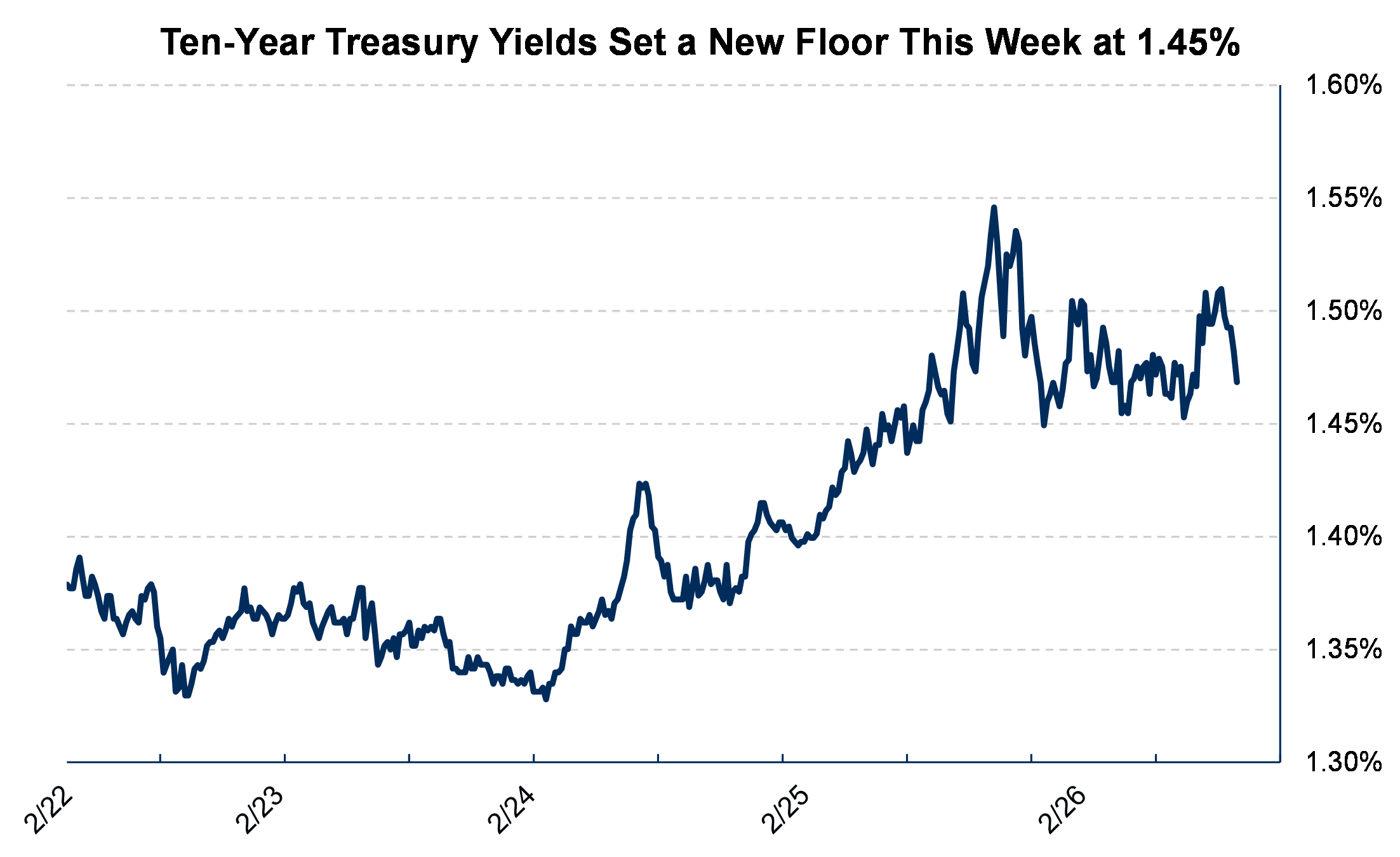 Current Federal Reserve policy dictates the central bank will not raise short-term interest rates, which floating rate funding rates, such as LIBOR, SOFR, and AMERIBOR are based on, this early in the recovery. The Fed is seen to willingly overshoot its 2% inflation target, perhaps for years, while testing the limits of inflation in a tradeoff of supporting the nearly ten million unemployed America, including the most difficult segments of this group to help recover, that being the lower income, primarily minority, jobless.

In his semiannual testimony on the economy to Congress, Fed Chair Powell reinforced this week that the Fed aims to overshoot its 2% inflation target and told progressive Democrats repeatedly that he was on the same page with them in aiming for a tight labor market that pulls in low-income and disadvantaged workers. He dismissed the rise in bond yields as "a sign of confidence" in these goals.

Evidence this week, particularly on Thursday, in the $21 trillion U.S. government bond market suggests some investors do not believe that the Fed will be able to maintain this policy. Short-dated rates signal a Fed hike coming in around two years. The bond market's divergence from a fundamental backdrop was most evident at the shorter end of the curve. Eurodollar contracts, which are priced off LIBOR, collapsed in record volumes as traders repriced their expectations for the path of federal funds rates. Markets now see a Fed rate hike by March 2023, compared to mid-2023 previously, and have priced in rates over 50 basis points (0.50%) higher by early 2024: 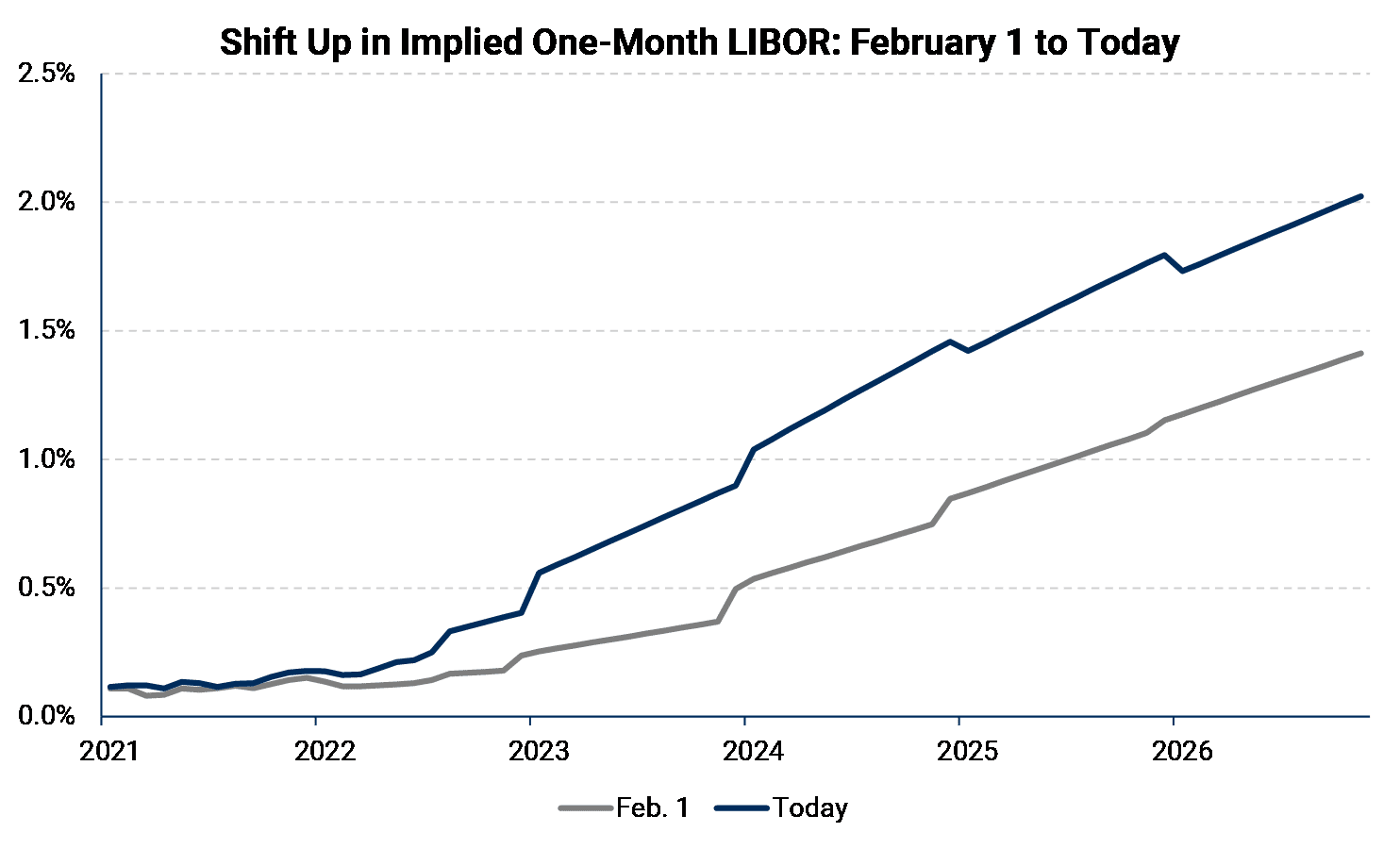 Many leading economist and financial forecasting firms are warning of economic overheating from the $1.9 trillion stimulus bill signed in the House of Representatives that is expected to also pass the Senate soon in a somewhat similar form, allowing President Joe Biden to sign it into law early next month.

But there is a fine line between the yield curve manifesting investor confidence in the recovery and its signaling concern that the economy could overheat and force monetary policy makers to reverse their tactics much sooner than planned. Derivative traders have pulled forward to about early-2023 from early-2024 when they foresee the first Fed rate hike above their federal funds target of 0.00% to 0.25%.

Market expectations for inflation over the next decade, derived by increasing Treasury yields and inflation-linked debt (such as the 30-year linked TIPS securities), is near its highest level since 2014, suggesting more than just a transitory pickup in inflation. Fed officials have stressed repeatedly that even if prices do jump in coming months, it Is likely to prove transitory. The more important goal for policy makers is employment, with nearly ten million people out of work compared with pre-pandemic levels.

But for all Powell's calls to look at the reality on the ground, the Fed has been surprised in the past at just how fast market tantrums can run. A selloff in the stock market in late 2018 prompted a memorable Powell pivot in January 2019, when the central bank took further tightening off the table. By the end of that year, policy makers cut rates three times. While Fed speakers have so far indicated no inflationary concerns, their tune can change, potentially abruptly.

Regulation — another potential influence on this week's rise in rates

Bond traders, already on edge, are awaiting Fed guidance of a regulation that has encouraged banks to buy Treasuries. Powell did not provide an answer this week as to whether the measure would be extended, which likely helped extend a clearing of positions in the interest rate swaps market.

A Fed tweak to bank regulation last April exempted Treasuries from banks' supplementary leverage ratios, an extremely important measurement for banks and their regulators, allowing them to expand their balance sheets with purchases of U.S. government bonds. This increased the attractiveness of Treasuries over interest-rate swaps, widening the spread between the two over the past year.

However, this temporary regulation allowance is set to expire next month. If it is not extended, then anticipate a change in banks' purchasing and maintaining Treasury holdings, thus potentially motivating yields even higher.

U.S. incomes rise the most in nine months

U.S. personal incomes soared in January as Americans received another round of pandemic-relief checks, helping to recharge the economy with the strongest spending advance in seven months. The 10% monthly gain in incomes, slightly above the aggressive forecasts that called for a gain of 9.5%, was the largest in nine months, a Commerce Department report showed Friday: 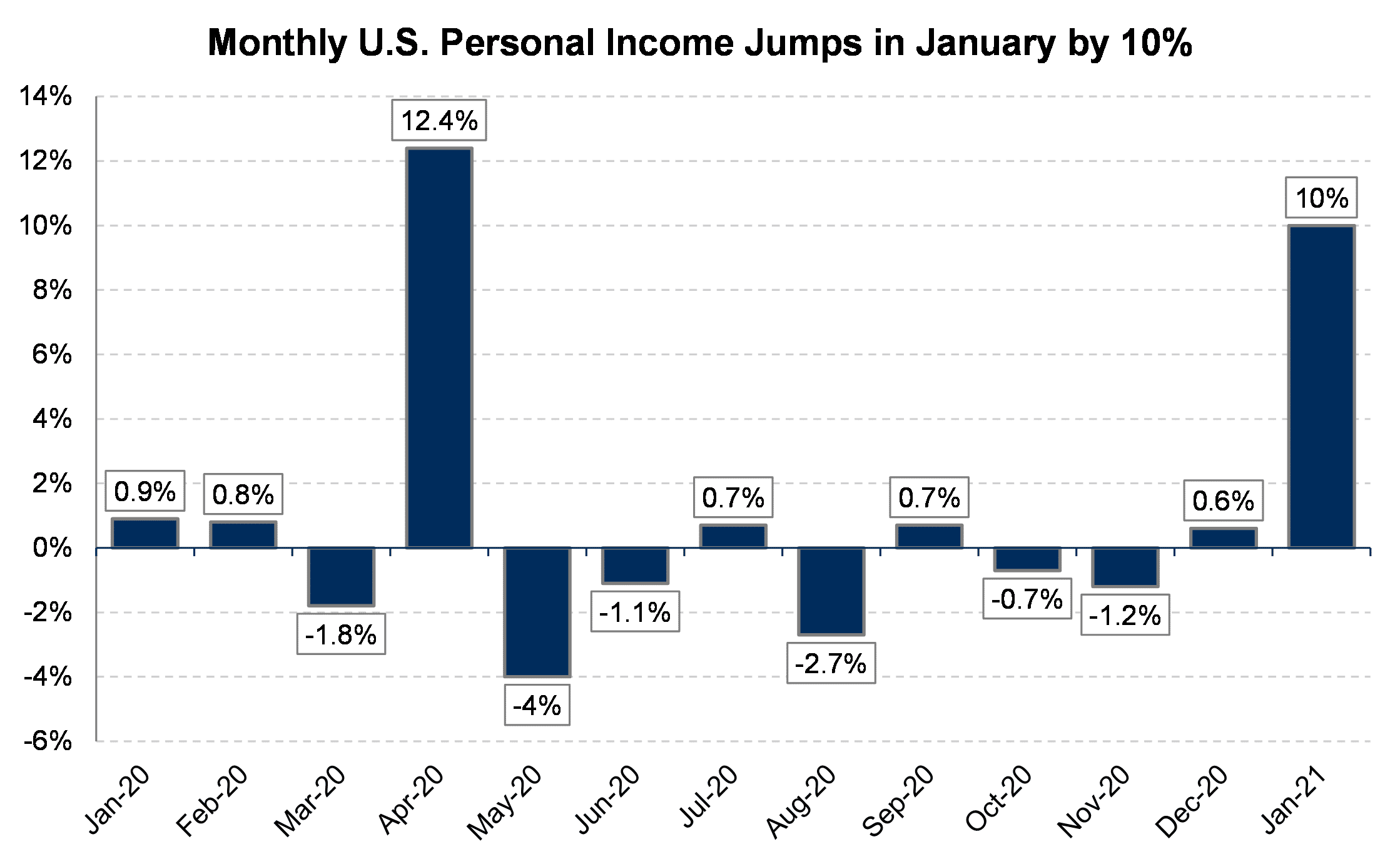 The surge in incomes, and expectations of even more stimulus, is seen providing additional fuel for consumers at a time of pent-up demand in the wake of pandemic-related disruptions to the service economy.

The January increase reflects the $900 billion pandemic aid package passed in December. The bill provided direct checks to millions of Americans and supplemented jobless benefits with an extra $300 a week payment. While many have saved the government support, the robust increase in spending shows others are spending it.

As lawmakers move forward with Biden's $1.9 trillion aid plan, it has the potential to drive even more income growth. Another round of stimulus checks paired with a child tax credit and an increase in weekly unemployment benefit payments would buoy disposable income in the coming months.

Prospects for trade imbalances and the U.S. dollar

The U.S. economy appears primed to recover from the COVID-19 slump much faster than others, causing havoc on U.S. bond markets this week and potentially exacerbating the kind of imbalances that caused trouble following the Great Recession. The prospect that the U.S. recovery could decouple from developed-world peers and the implication of that for global currencies and trade was profiled when finance ministers and central bankers from the Group of 20 major economies met online this week.

A varied rebound in the global economy continues with a strong U.S., a moderating China, and a choppy Eurozone. The speed differences are the result of economic policy choices as well as variance in the severity of virus outbreaks, rules for containing them, and rollouts of vaccination programs.

If the gaps persist for too long, it could stir up tensions over trade and currencies like the ones that followed the most recent financial crisis, as well as deepening inequality between countries. The U.S., where President Biden is pushing for an additional $1.9 trillion in pandemic relief measures, appears to be the most committed country to running its economy "hot". U.S. officials are calling on others to keep their foot on the stimulus gas, as well.

In a G-20 virtual meeting this week, Treasury Secretary Janet Yellen urged other G-20 countries "to continue to take significant fiscal and financial policy actions and avoid withdrawing support too early". She added that "together, our efforts will be greater than the sum of our individual responses."

Some market forecasts call for the U.S. economy to expand by 6.2% this year, recouping all its 2020 losses, and then some. By contrast, the Eurozone, U.K., and Japan are not forecasted to reach their pre-COVID GDP levels until sometime into 2022. While all major economies boosted government spending to shore up growth in 2020, hardly any, except the U.S., are anticipated to be running expansionary fiscal policies in 2021.

In the near term, the major global economies will get a lift out of rapid growth in the U.S., because it is the world's biggest importer. For countries that have weaker economies, or are less willing to stimulate them, it basically means more external demand. This should not cause significant problems if the U.S. embarks with big stimulus, provided it does not trigger the kind of inflation that would lead investors in dollar assets rushing for the exit. This is the big "if".

In the longer run, the perception that other economies are taking advantage of the U.S. role as consumer of last resort can fuel trade conflicts, like it did with China under President Donald Trump. Even before that, in the early 2010s, U.S. officials would complain that Europe was running their policies too tightly and not contributing enough to global growth. The same kind of tensions could await in a post-COVID world if policy support is executed in an uncoordinated manner. Countries that under-stimulate their economies must rely on demand from the rest of the world. There are already ominous signs that the recovery has become unbalanced, like growing current-account surpluses in China, Vietnam, and Taiwan, and deficits in the U.S.

Currencies may be another cause of contention. The U.S. dollar has been declining steadily after a spike early in the pandemic, causing anxiety among countries that do not want their exports to become less competitive. Secretary Yellen has said the U.S. will let markets determine the greenback's value. The U.S. is likely to push back against other countries' intervention in foreign exchange markets to weaken their currencies, despite other major advanced economies being in worse economic straits.