The U.S. court of appeals re-visited the case of whether a lower court's revocation of a key environmental permit for the Dakota Access Pipeline was lawful. The lower court cited a violation of the National Environmental protection Act as grounds for the permit's termination.

A three-judge panel heard the case on whether the Army Corps had falsely approved a permit for the pipeline despite the risk of an oil spill to the Standing Rock Sioux and other indigenous tribes' land. According to Bloomberg, at least two of the judges seemed to be leaning towards ruling in the lower court's favor, which would shut down the pipeline's operation for the foreseeable future.

In August, the court of appeals ruled that the pipeline could remain in operations while the appeal is considered. Still, a decision in favor of the lower court would require the pipeline to be brought offline by the end of the year while the case waits to be heard by the U.S. Supreme Court.

The pipeline may face an uphill battle convincing the panel to uphold the permit. The panel hearing the case — Judge David Tatel (appointed by Bill Clinton), Judge Patricia Millett (appointed by Barack Obama), and Senior Judge David Sentelle (appointed by Ronald Reagan) — may not bode particularly well for the Corps' cause, according to Politico. 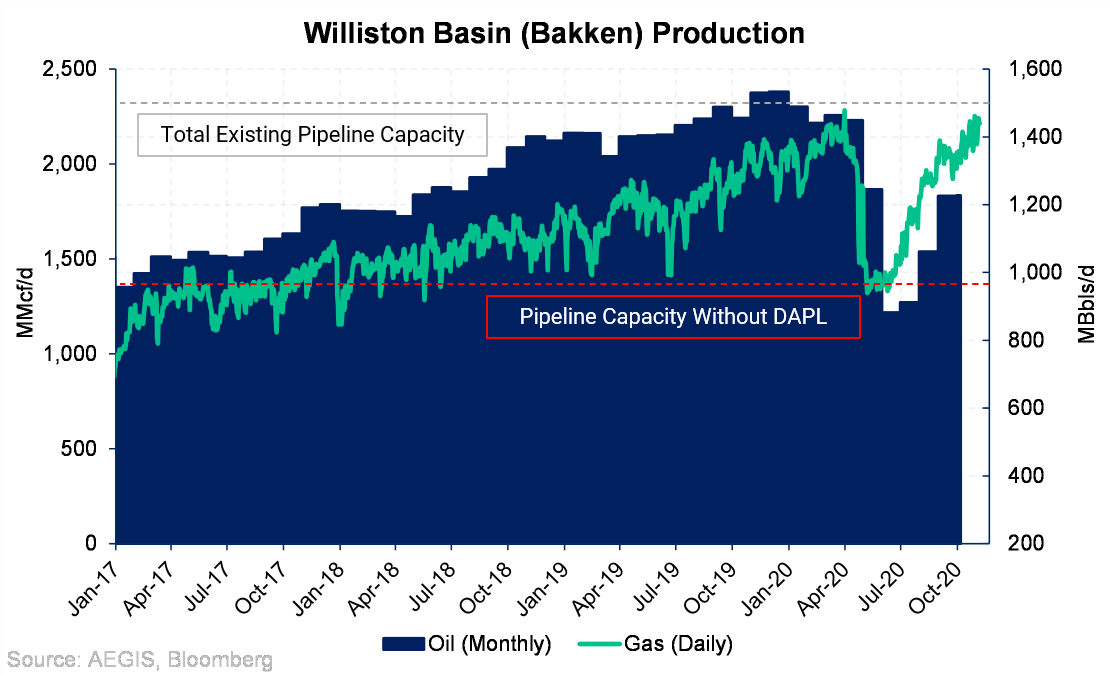 So what does this mean for price? It depends on how oil production performs. If Bakken-Williston output continues to recover, then we could see some scarcity of pipeline space in this regional market. The 2020 collapse in oil prices may have temporarily discouraged production in the basin; however, a recovery seems to be underway. In the chart above, you can see the pace of recovery in output. Gas receipts implies production is around 2.2 Bcf/d, and this could mean crude production is near 1,395 MBbl/d.

Still, further declines are a possibility. According to the state's Department of Mineral Resources, the state could see production dip this month as the economics of production in the area do not support growth if WTI is less than $45/Bbl.