Markets were jolted on Friday by the surge in yields, after relatively smooth bond sales this week had eased concerns on the fixed-income outlook. The wave of stimulus and vaccine rollout in the U.S. is once more forcing investors to confront the prospect of excessive inflation. The focus now turns to the Federal Reserve decision next week. 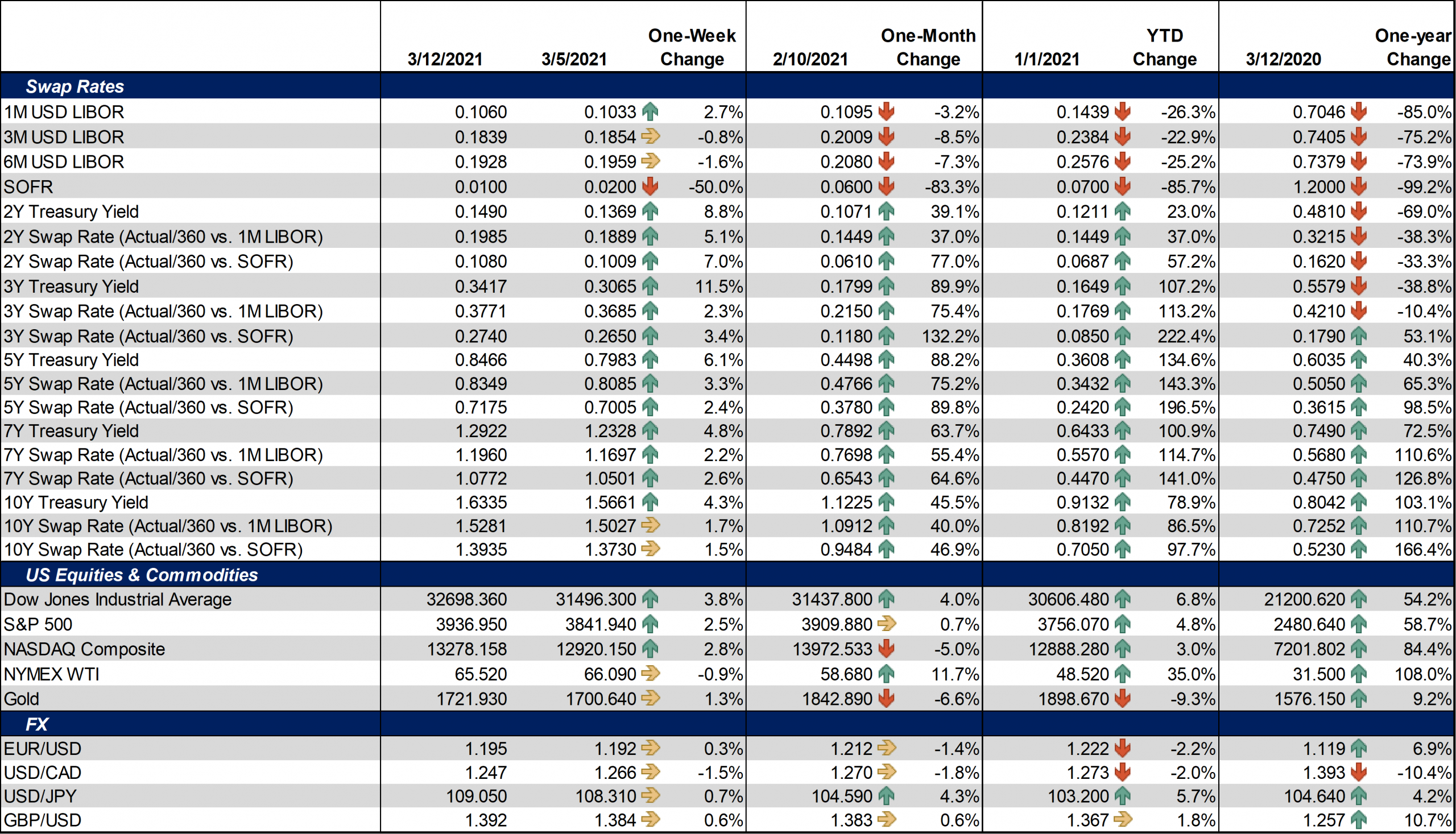 U.S. Treasuries are probably the world's most important financial market, but it is easy to forget about them when they are well behaved. When prices suddenly drop, which causes their yields to rise, for many investors it signals that it is time to run and hide as trouble lies ahead. The yield on the benchmark ten-year Treasury climbed this month to as high as 1.62% several times intraday, including Friday, up from less than 1.00% at the start of the year: 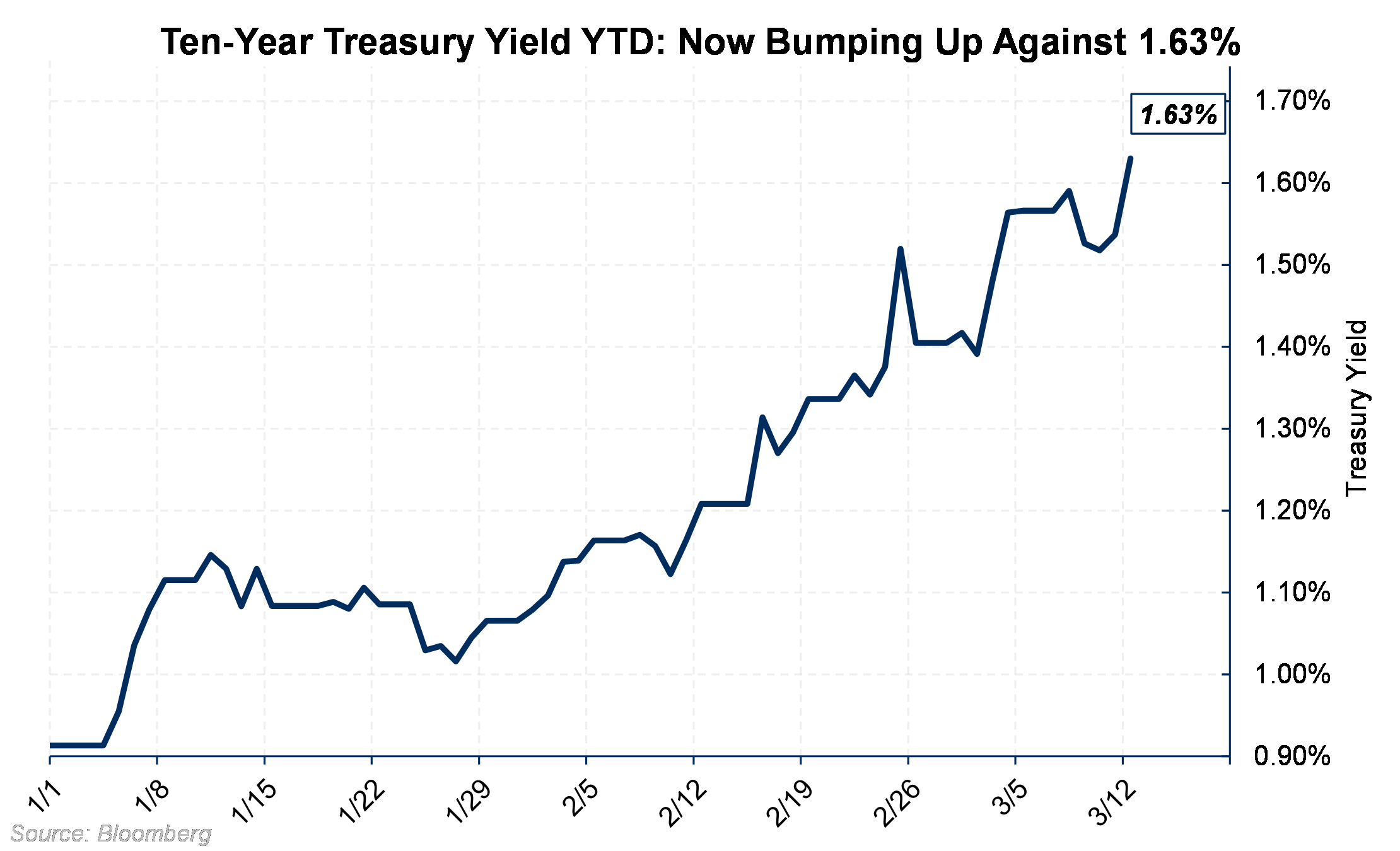 Although that is still very nominally low by historical standards, it has been high enough to spread pain in the most popular and rewarding parts of the stock market.

What happens next hinges not only on the continued vaccine rollout and effectiveness of President Joe Biden's $1.9 trillion relief package, but also on the delicate back-and-forth between U.S. Federal Reserve Chairman Jerome Powell and the markets. The spike in ten-year yields suggests that efforts to revive the economy are working, but if those rates rise too quickly, there is a risk they will nip the recovery in the bud. Bond investors see consumers with swollen savings getting ready to spend again while companies rehire, and to them that looks risky. A hotter economy could mean inflation and rising interest rates.

The Fed has signaled that it will likely keep monetary policy accommodative for years to fight the pandemic's long-term damage. However, Quantitative Easing (Fed Treasury note and bond purchase programs) and a zero percent federal funds target cannot last forever.

In his recent public remarks, Powell has acknowledged that the rise in yields had caught his attention, but he stressed that overall financial conditions are more important. He also said he would be concerned if the yield rise was accompanied by disorderly conditions in markets, such as an increase in corporate lending spreads. The latest gyrations in tech stocks do not qualify as disorder. With many investors warning that equities are still in bubble territory, and the Fed serving as the usual suspect for getting them there, some minor hits to richly valued stocks might be welcomed by Powell. He and his predecessor, Janet Yellen, now the Secretary of the U.S. Treasury, both indicated some wariness last month about exuberant markets. Policymakers face a dilemma: While they recognize that loose policies can fuel financial excess, they believe the virus-damaged economy still needs substantial help.

In his speech to the nation, Biden offered a Fourth of July goal for the U.S. to begin returning to normal as "light in the darkness" to a weary nation on Thursday, counting on a rapidly expanding supply of coronavirus vaccine to raise American hopes. In his first prime-time address as president, Biden told states he wants all adults (actually, those 16 and older) in the U.S. made eligible for vaccines by May 1st. "If we do all this, if we do our part, if we do this together, by July 4th there's a good chance you, your families and friends will be able to get together," Biden said.

Biden spoke to a scarred American public, where about one in five Americans say they lost a relative or close friend to COVID-19, according to a new Associated Press poll. The roughly 24-minute address served as table-setting for a White House with ambitious plans for the coming months. Substantial headwinds from the lingering pandemic to razor-thin majorities on Capitol Hill give the president little room for error.

While vaccinations are slowing infections by a virus that has already killed 530,000 Americans, the president still must manage a massive logistical effort, convince skeptics to get their shots, and do both before new, more contagious variants of the virus potentially emerge.

Biden announced that the administration was doubling the number of pharmacies and federal mass vaccination sites offering shots, and that he would deploy about 4,000 additional active duty troops to assist in the effort. The government will create a website and open a 1-800 number to help Americans find available shots and offer technical support to states developing their own such services. Biden also said that if stimulus failed, he would acknowledge, or "wear", it.

Ten-year Treasury yield forecasts and the market's view on inflation

The ten-year Treasury yield has further room to go if it can break through its 1.62% resistance level, with the next stop at 1.80% and potentially 2.00% by the year's end. If this occurs, growth stocks, primarily in the tech sector, which maintain a high sensitivity to rates, will continue to be viewed as being overvalued.

With Friday's sudden spike in rates, Treasury yields have returned to levels seen after the disastrous seven-year U.S. bond auction on February 25th. Markets had been looking for a period of calm after the relatively uneventful passage of this week's debt auctions, including a ten-year new issue auction, with focus switching to the Federal Open Market Committee's ("FOMC") March 16th-17th meeting policy decision. Treasuries are now highly prone to volatility as we head into the FOMC meetings next week, along with the scheduled 20-year Treasury and ten-year TIPS (Treasury Inflation-Protected Securities) auctions.

Bond market gauges of the inflation outlook continue to soar. The ten-year breakeven rate is just under 2.30%, its highest level since 2014. The five-year equivalent is at its highest since 2008. The bond market is seeking a new equilibrium in the light of a vastly improved economic outlook in both the U.S. and elsewhere. Some analysts believe this may not occur until the U.S. Treasury yield hits 2.00%. Another factor pushing yields higher is the sheer volume of Treasuries now flooding the market, a byproduct of the trillions of dollars the government is spending to support the economy during the coronavirus pandemic. Net new supply of two- to 30-year Treasuries is expected to reach $2.8 trillion this year, up from $1.7 trillion last year and around $990 billion in 2019.

Supply may not be the primary factor driving yields higher. But it has been an accelerant, weighing on the market precisely because the economic outlook has already made investors hesitant to buy bonds as many bond market participants feel that the level of Treasury auctions is getting out of control. The Treasury Department had just sold a record $126 billion in three-year notes, ten-year notes and 30-year bonds during the week.

Investors, though, hardly expect any let up in government borrowing. In recent weeks, congressional Democrats and the Biden administration have signaled interest in another multitrillion-dollar spending package to update the country's infrastructure. Investors also are on edge about the possibility that the Fed could start scaling back or tapering, its monthly purchases of Treasuries once the economy picks up momentum, putting even more Treasury bonds in circulation, hence decreasing their demand and raising their yields.

Markets are increasingly concerned that the Fed will not extend its relaxed supplementary leverage requirements ("SLR") for financial institutions when they expire at the end of this month. This could not only hurt high-flying bank stocks, but the bond market as well.

The Fed has allowed the biggest U.S. banks to exclude a combined $2 trillion of U.S. Treasuries and deposits at the Fed from their bank ratio calculations. This is something banks like, and they have mounted a lobbying campaign to extend this allowance. But FDIC Chair Jelena McWilliams recently said that banks do not need further SLR relief, and Senators Sherrod Brown and Elizabeth Warren urged regulators to reject the banks' appeals. Yet, Fed Chair Powell has given no indication of his thinking.

The impact on the bond market here is difficult to gauge. Banks may sell Treasuries to meet the requirements. After all, relaxing the leverage rules last April allowed banks to help stabilize credit markets and maintain funding. So, it is not surprising that bond traders are increasingly nervous about what might happen if the process is reversed.

If the leverage requirements remain in place, banks could opt to issue preferred equity, turn down deposits, or cut share buybacks. That said, it seems unlikely that Powell or Treasury Secretary Yellen would support something that might cause market turmoil or disrupt the flow of capital in the wake of stimulus payments. Indeed, the Fed just in December cleared buybacks, sooner than anticipated. This SLR decision is an important event to keep an eye on over the next few weeks.